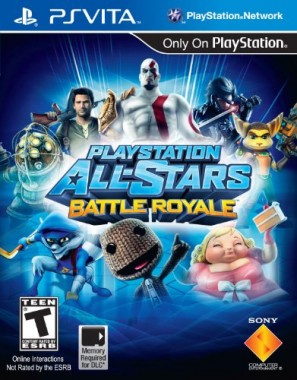 “It’s a Smash Bros clone!” Yes internet, PlayStation All-Stars Battle Royale, henceforth known as PABR to save my sanity, is a mite like Nintendo’s brand icon brawler. Back in the day I spent a few hundred hours with Melee, and upon booting up PABR the menus and the modes and the collectibles and the flashy opening video are all extremely familiar.

Crucially the fighting is different, the online exists, and there’s been a refreshing lack of cloning going on in Sony’s All-Star recruitment agency. Everyone has their own preference when it comes to fighting games, and besides a few minor tics and issues with the online system, All-Stars can easily stand as a viable option along with the rest. Put aside the copycat gripes and give it a chance, for behind that excruciating title there is something well worth a Vita owner’s time.

First up, the fighting mechanism. Victory hangs on the use of special attacks, which are earned by beating the living daylights out of your foe. There are three special attacks for each character, with each gradually becoming more powerful and therefore taking a bit more ass kicking to earn. Special attacks are the only way to do fatal damage and rack up game winning points, therefore aggression is the name of the game. Each character has a selection of throws and standard attacks to rack up hits, and a bit of practice with a favourite character will gradually unveil the smoothest and best ways to link them all together.

The reliance on special attacks means that balance between characters is key, and SuperBot have already shown themselves to be keeping a close eye on things, nerfing Sackboy and his level three special in the first update. Fans on forums will always argue about the necessity of these tweaks vs. the inadequacy of fellow players, but the fact that these changes are happening is reassuring – All Stars hasn’t been abandoned out of the gate.

The super attack system will not be to everyone’s taste – miss and everything before it goes down the drain. On the other side of the coin it adds a huge element of time pressure to matches and forces players to be confrontational, keeping the pace of battles at a high. Strategy also comes into play: do you hold out for a level 3 attack that guarantees doom or keep the level 1’s flowing, hoping for a good hit rate? 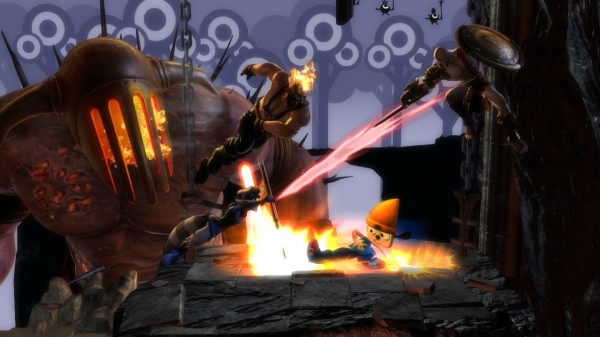 The levels also contribute a lot more to the action than in ‘that other game’, with more dynamic levels that feature a lot more explosions, projectiles and Buzz quiz questions. Taking two games instead of one and smashing them together, that small point of difference allows for some weird and wonderful combinations. It’s not so much quality level design that sells it more than nostalgia and novelty, but in a game like this that is essentially what you’re here for.

Items are also present in the same way as the stages, taking a cue from popular games to bring some random powers into play. Sadly the control mechanism for using them on the Vita renders them largely useless. All Stars, when you’re playing online or at higher difficulty, is a fast paced brawler where stopping to poke the screen is a silly idea. Poking a highly specific area of the screen is also silly, as is poking it again to drop what you just picked up. Items can be useful – they drain AP points when you land a hit – but they prove more of an irritation than anything else.

Some of the points above are most significant to the online modes of the game, but the single player offers up a good selection of modes that allow some time for practise – and for collecting thousands of things you never knew you wanted. The first stop for many will be Arcade mode, a fighting game standard that tries to pin a story on a collection of fights. Here each character is paired into a rivalry, with a bit of shallow storytelling that feels pointless for the majority – although Sackboy and Big Daddy’s beef with each other is surprisingly fitting and sweet. Pick a character and take on the rest of the roster, easy as. The fights could have used more variation and the end boss is pointless given that as a character he doesn’t actually fight, but it’s a good place to start, and with three difficulty levels Arcade will have something for everyone; at least to begin with.

So what about the roster itself? One of the joys in this kind of game is finding your character, trying out each and every member of the roster to see what will jump out and surprise you. With All Stars I didn’t have the same drive to do this as with Nintendo’s title, and the names on offer here are -for your regular non Sony exclusive gamer- far less famous. Nonetheless there is a good enough sense of variety on offer here, even if some of the characters are clearly there for marketing purposes (emo Dante) or are rather strange choices for representing their franchise (Heihachi). And where the hell are Crash and Spyro? Do Radec and Fat Princess seriously belong in this game compared to those guys? The newly announced DLC brings Cat (Gravity Rush) and Emmet Graves (Starhawk) to the party, hinting at a more forward facing attitude to characters being introduced in the future. 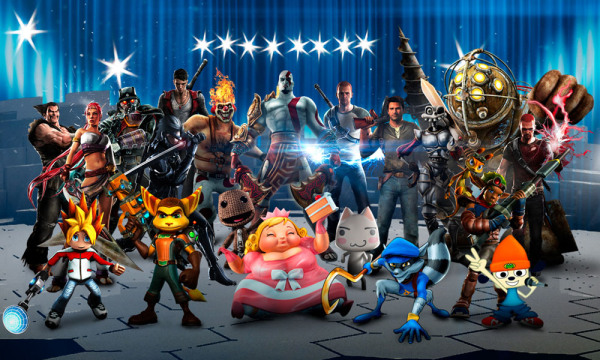 The lack of unlockable characters is a bit of a gut punch that saps the urge to play everything as every single character, but the general lack of clones (apart from the weird inclusion of both Cole and Evil Cole from Infamous) is refreshing. Interestingly there is a certain bias toward the ‘normal’ humanoid characters. Kratos and Raiden run riot online, with a steady supply of Radec and Sweet Tooth. Toro and Spike are pretty much entirely absent, as is Fat Princess. Sackboy is perhaps the only exception, possibly because he comes complete with an easily spammable move set.

Every time you play as a character you earn points to rank up, with certain ranks unlocking a treasure trove of goodies that can be used to customise your character and player set up for online matches. Yes, different victory poses aren’t that thrilling, but the selection of backgrounds and icons are a nice way to show off as well as customise. The ranking system is also a loud and clear indication of who is going to ground you into dust when the online rank matching doesn’t work out too well – level 500 Raiden or level 3 Drake anyone?

Playing online matches in tournament mode nets you another kind of bragging tool – a belt! Gain a ranking after playing enough matches and you will eventually gain a belt, and completing a season (a month essentially) with said belt can net you yet more unlockables. Now there is a specific order that you rank up in and a number of points etc. to gain, but nowhere in the game is this information visible. Black belt is obviously awesome, but not every martial art has the same belt progression – it would be nice to know exactly what you have to do to grade up without consulting the internet, and to know if my green belt is ok or little more than a noob indicator.

Now those are fairly small gripes when it comes to the online mode, which has other issues that mar the experience more severely. The inevitable comparison between this game and Nintendo’s Smash Bros demands an excellent online mode, and whilst it is good, it is certainly not great. It happens far too frequently that players will appear to drop out of a game yet still be participating. What appears initially to be a four man free for all will have two characters on screen, but at game’s end the other two pop up in the results and take home the glory, leading to moments of utter frustration as a Big Daddy that was never actually visible takes the win. And it happens often. Throw in a tendency for players to port around the screen and a few spammable combinations and life can be a bit frustrating in PABR’s online world. That said it is still intensley enjoyable to head into a four man free for all with a good group of players, and once you’ve figured out the ranking system the need to  have that one more game is only broken when you can’t find a match. 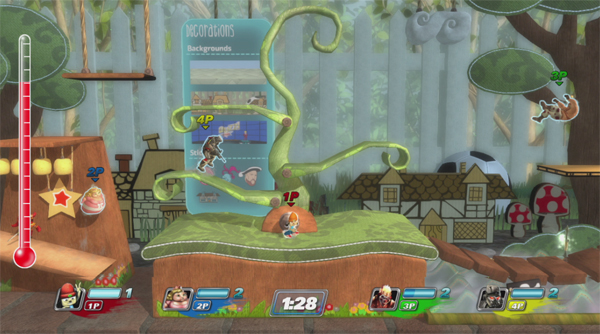 And the matchmaking is a little less than elaborate, leaving you to constantly step into a new match with new competitors – could we have a lobby or two please? Perhaps more tournament like match ups so I don’t spend equal amounts of time fighting and not connecting to the servers? Fortunately the cross play feature of the game is pulled off, redeeming the online offering somewhat.

There are flaws with the game but this cannot take away from the fact that the fighting is highly enjoyable. There is more to be found under the surface than you would first expect, victory is satisfying and defeat prompts more practice rather than frustration or rage quits. Unlike with more combo heavy brawlers a novice can still have fun and get into the action, and if you’re clever about it even an average player can make clever use of special attacks to score some points online. Sony fans will have a ball getting to grips with the characters, and perhaps Sony’s marketing ploy might work like a charm too – I can’t deny that playing Nariko has given me a taste for Heavenly Sword – looks like I’ll have to spill some cash on a five year old game, congratulations marketing!

Apart from the aforementioned online problems PABR plays very smoothly, keeping up with the fast paced action and presenting an impressively pretty picture on the Vita’s small screen. Menus are clear and colourful, even if some of the finer points take a little bit of poking around to discover. The stages looks fantastic and both they and the characters are dead on matches for their original counterparts, helped along by the appropriate voice acting and effects. Some of the super attacks sport a great bit of design in their own right, and half of the joy is discovering those bits of gaming mashup magic for yourself.

The main theme is energetic, catchy and almost infinitely listenable, which is a good thing given how much time you’ll spend listening to it when looking for online matches. Music pops up from the original games during the appropriate stage, and there’s no denying the rush you get when that fantastic Uncharted music hits in a fight. Aesthetically brand name brawlers are all about providing old and much loved experiences with different mechanics, and Superbot have certainly accomplished that here.

It has plenty of flaws and quirks and niggly bits, but I couldn’t help but enjoy PlayStation All-Stars Battle Royale. The roster could be better, the online could be better, the arcade could be better, but ultimately the actual punching and kicking is a bucket of fun. The unlockables are cleverly linked in to the action to ensure an appropriate level of addiction, and when everything runs smoothly an online match up provides three minutes of adrenaline fuelled craziness.

Pick up and play for kicks or sit down and play for points, it happily works both ways. There are Street Fighter fans and there are Tekken fans, so why can’t there be Smash Bros fans and Battle Royale fans?