PixelJunk Shooter 2 is a direct sequel to PixelJunk Shooter, one of the latest series of games from the PixelJunk universe.  For those who aren’t aware of what the game is, at its core it is a 2D shooter that tasks you with navigating dangerous environments while rescuing survivors.  Needless to say, if you are a PS3 owner and enjoyed the first game you will most assuredly enjoy this one.

Most downloadable titles aren’t really story intensive (mainly because they are so short) and this one really isn’t either but there is some small story there for those who care.  A group of people have lost contact on this planet and it’s your task to rescue them.  That’s your “reason” for doing what you do.  The rest of the story comes from the level design and set pieces.  The first game ended with you rescuing a worker from a construction robot gone haywire.  As you hovered above the defeated machine a massive creature (giant worm) erupted from the ground and ate you, leaving the ominous “to be continued…” message on the screen shortly after.

What was thought to initially be DLC as a follow-up to that event, Q-Games decided to just go for broke and instead of adding only one more level, create an entire sequel.  You start out literally right where the first game left off, being eaten by the worm.  You eventually work your way out somehow and move on through the next two areas, discovering what is causing all of these creatures to become hostile and leave their homes.

The majority of the story comes from special, unique survivors that are found in each level.  Usually tucked away in a secret area and requiring some clever thinking to access, these survivors (also known as scientists) give you little snippets of information once you rescue them.

Chances are you’ve played a game like PixelJunk Shooter before.  You move with left stick (regardless of where your ship is facing), aim with right stick and fire with R1 or R2.  In the first game, holding the fire button would fire off a continuous salvo of homing missiles (as long as your ship didn’t overheat from repeated fire) that was arguably worse than simply mashing the fire button to unleash a barrage of bullets.  In the second game, however, holding the fire button now releases significantly more rockets at much greater speed with seemingly improved tracking.  However, this means that unless you have a shield equipped (which means you will no longer overheat) you will almost instantly overheat upon firing this.

A big gameplay mechanic of the first game was the fluids and the various suits you would use to overcome and master these fluids like lava, water, ice, ferrofluid (magnetic, black liquid) and flammable gas.  Throughout the levels you would find suits to outfit your ship in, allowing you to pass freely through lava, shoot magma, shoot water or repel ferrofluid.  These were arguably the selling point of the game, having a game where the various elements that make up the game world are interactive and integral to your progression.  The second game capitalizes on this feature and adds in even more elements and suits while making slight tweaks to the existing ones.

The first world, the giant worm that ate you, is home to possibly the most diverse assortment of these changes and additions.  In this world you are introduced to purple acid which will eat away at your ship until you die unless you find some water to wash it off with.  This acid can turn into bubbles if agitated, which will cause your ship to spin and twirl in whatever direction you were going in.  To counter this you most use your grapple to either latch onto certain areas that will spin you around until you let go, providing some temporary control or simply use the grapple to destroy the bubbles and eventually clear a path.  As if this duality were not enough, acid bubbles will multiply greatly if they come into contact with lava, converting lava into bubbles (not sure how that works).  The great thing is this is only one new fluid/dynamic. 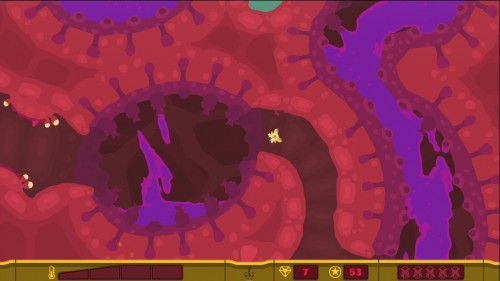 Also within the worm is one of the new suits, the hungry suit.  The hungry suit slaps on a giant mouth to the front of your ship, making for a pretty comical sight.  Traditionally you can fly in whatever direction you want, no restrictions, but when you have the hungry suit on the game turns into a digdug-like game.  The hungry suit allows you to eat through a sand-like substance which is otherwise immune to your weapons.  You can only move up, down, left or right and will endlessly move in one direction unless you direct yourself to run into a wall (the only means of stopping with this suit).  The challenge in these areas is figuring out how to get out without dying as you are no longer able to shoot.  The fire button will make your ship bite and the only thing it can eat is the sand.  In order to defeat any enemies you might come across, you must strategically eat the sand out from under a rock that might happen to be above them and allow the rock to crush them (a la digdug).  This makes for a pretty unique experience within the game and is a welcome addition. 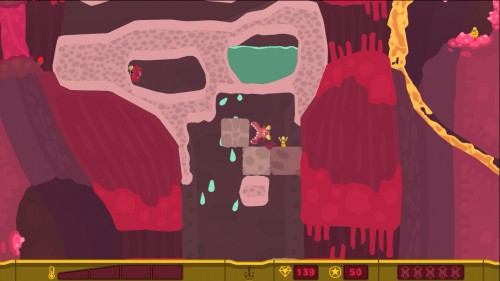 There are other suits and fluids such as eggs which endlessly multiply (and kill you if you get trapped) which can be destroyed by water though doing so will release bees which will mess up your ship control, darkness (not a fluid but whatever) which will prevent you from using a grapple to pick up survivors and will eventually destroy if you if stay in the dark for too long.  To counter this you either find the light suit, which provides a beam of light from the front of your ship and protects you from the dark or create/move some ice around which acts like a small light OR find some lava which is its own light or have it light up some special plants OR flip a switch that turns on some mechanical lights.  Basically, there is a plethora of ways to counteract the dark, but that doesn’t mean it’s easy.  The dark levels are the hardest in the game, so be weary.

Aside from ALL of this, however, PixelJunk Shooter 2 sports a fully fledged online multiplayer experience.  Seemingly coming from nowhere, this multiplayer mode is somewhat like capture the flag.  Two players are thrown into a small arena-like level.  One side is holds your base and the other holds your opponents.  One player is on “offense” while the other is on “defense”.  The offensive player is tasked with traversing the level without being killed by the defensive player while finding small capsules that hold survivors to bring back to your base.  It makes for a fun and frenetic experience, if not somewhat frustrating at times.  Part of the catch is that when you on defense the other player is invisible.  The only way to see them is if they come within your field of view which is a conical radius about 4-5 ship lengths in front of you.  If you manage to spot them with this, they will get frozen for about half a second, allowing you to get some free hits.

The big draw with this is that it isn’t some tacked on mode, it can serve as a complete alternative to the campaign mode.  This online battle mode is set up a bit like a linear board game.  You start out on an asteroid and after 7 wins you progress to Saturn and so on with other planets.  Each planet is more or less a representation of your “rank”.  Winning matches also nets you some money, which you spend to buy weapons for your ship to help you in battle (these weapons are only present in the multiplayer). 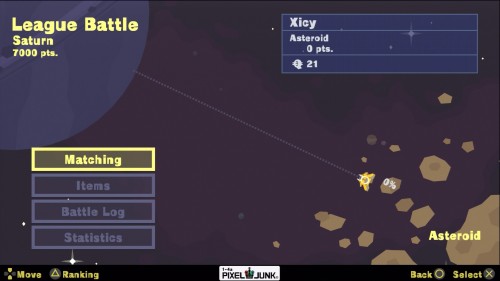 While this all sounds great, do know that there is a small amount of lag present which can put a damper on things and you cannot progress through the online mode with friends.  There is a mode where you can you play against your friends, but you will not receive any points or money in this, this is only for fun.  In order to progress you MUST fight against random players which is a real letdown.  This was done to prevent boosting (players just allowing each other to win/lose so they can rank up) but the fact that it’s only 1 on 1 really makes this more of a hindrance more than protection.  It’s just not as fun playing against random players and, in a way, being punished for playing with friends as you won’t gain anything from it.

PixelJunk Shooter 2 is par for the course when it comes to displaying PixelJunk’s iconic art style.  While the game isn’t necessarily pushing the PS3 to its absolute limits, the game looks great.  It’s a fun and quirky art style that is sure to leave its mark on your memory.  Just like in the first game, there are gems and secret areas hidden throughout the levels which will provide some extra challenge at getting 100% and provide some replayability.  Gems and secret areas are also harder to sniff out than in the first game, though they won’t require a genius to find.  Just know that they are better hidden and should provide you with a greater sense of satisfaction at discovering them.  The way the fluids interact with the gameworld absolutely make this game.  You can have just as much fun simply experimenting with how they interact with each other as you would playing through the levels.

Seemingly coming out of left field, this game actually pays homage to some classic games/genres.  I’ve already mentioned digdug, but there are also enemies which produce a bullet hell-like gameplay experience.  They are basically a giant orb that spits out small stars in bullet hell patterns.  For those who don’t know, bullet hell games task the player with navigating a ship through a seemingly impassible stream of bullets/shots coming at you.  It’s also a relief to see that each of these enemies has its own pattern of shooting, ensuring that you won’t “learn” how to dodge these enemies as easily as one might anticipate.  So there’s digdug, bullet hells and finally galaga.  Galaga is a game where you control a small ship at the bottom of the screen and enemy spacecrafts will fly into view above you and fly in pre-determined patterns.  The second boss in PixelJunk Shooter 2 replicates this almost exactly.  The game controls and mechanics instantly switch to Galaga’s controls and you need to destroy the bosses minions in the same way you would in Galaga before you have a chance at hitting the boss.  These small nods to classic games is a nice touch and will certainly evoke a sense of nostalgia for those old enough to have played the games that inspired these. 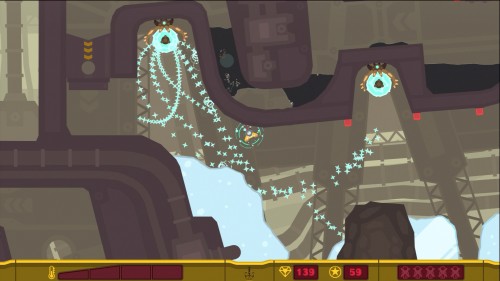 PixelJunk Shooter 2 is a great game, short and simple.  It has local co-op (no online, sorry folks), a fully realized online battle mode and a campaign that not only delivers on providing a satisfying follow-up to the first game but adds so much more to the overall experience.  If you have a PS3 then there isn’t much reason not to pick this up.  It does have its flaws, the online mode, while great, can lag and is a bit restrictive, some of the puzzles feel as if you are being hand-held through with only one method of solving them and there isn’t as much explorable space this time around, levels are almost linear with how you need to complete them at times.  Aside from those though, which are only minor annoyances, the game is nothing short of a great experience.  I completely recommend picking this up.