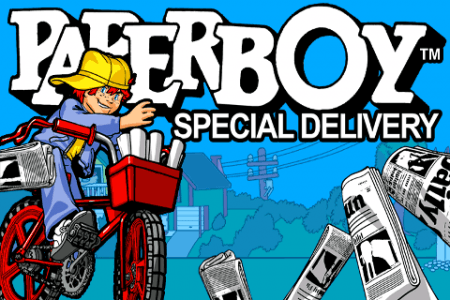 Do you still remember the original Paperboy that you used to play in the arcade back in the 80s? It has now comes to the iDevices! (Again!) The first port-over by Elite System Ltd. that reach the App Store in December last year was pulled due to licensing issues, and we thought we will never see it in the store again. Thanks to Glu, the game is now back on the App Store with a new game mode, more features and better graphics. 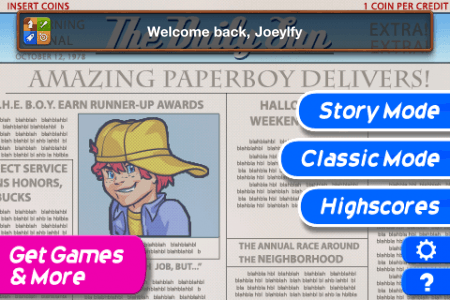 The core gameplay is similar to the original one on the arcade. You, as the paperboy, deliver newspapers to your subscribers. Points are awarded once you made a successful delivery. In each level, you will start from the bottom of the street with 3 lives and 10 newspapers (which is shown at the bottom of the screen). One life is lost every time you collide with the obstacles. It’s game over if you lose all your lives and you have to start all over again from the beginning. It is not easy being a paperboy (or papergirl) after all! 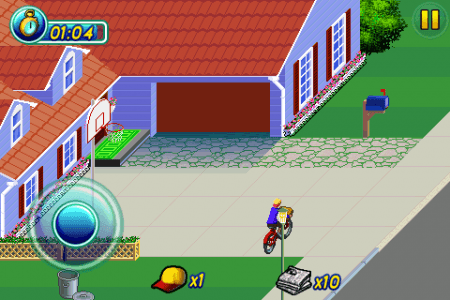 You will cycle along a suburban street with a long row of houses on the left side. No worries though. It is easy to distinguish the house of subscribers from the non-subscribers. The subscribers are indicated by a green mailbox and a yellow carpet by their doorstep. You can choose to deliver it to their doorstep or to their mailbox, but the latter will earn you more points.

As you cycle down the street, you have to avoid the obstacles to keep going. Some of these obstacles are stationary, while some will come rolling at your way. You will see trash cans, dogs chasing after you, burglars, lamp posts, moving vehicles on the road, random rolling tyres, a boy on a skateboard, a basketball guy, break-dancers, or even lawnmowers.

That’s not all. If you want to be the bad guy, you can vandalise the home by damaging their houses, such as throwing the newspapers towards the closed windows and you will see the windows break at that instance (newspapers can break the windows?!). You can do that to non-subscribers and ran away laughing. But if you try that stunt to your subscribers, they will unsubscribe. Less amount of subscriber means fewer newspapers to deliver, which results in lower scores. So be very cautious while planning your throws! 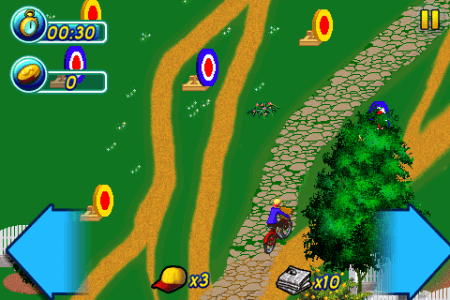 Glu has also included a new game mode. Yes, you heard it right. A new story mode is introduced, which they claimed to be easier than the classic mode. There are a total of 20 available levels for players to adventure through as the story unfolds, and there are plenty of mini-games within the levels to keep the players entertained. Are you bored of delivering newspapers? Now, you can race towards the end of the street at a given time, or be an archery-boy on the move by throwing newspapers at the bullseyes to challenge the global highscore. There are also 10 special abilities for you to unlock, like the yo-yo and the multi-paper throws. These abilities will help you in the later levels, which prove to be challenging (for me, at least).

In my opinion, Glu has implemented the controls mechanism very well for this game on the Apple portable devices. All you need to do is to tap anywhere on the screen to throw the newspapers. They are also generous enough to offer you 3 different control schemes to navigate around the street, which include the on-screen buttons with tilting controls, pure titling controls and a joypad.

The default controls utilizes the tilt controls and on-screen touch buttons to navigate as you cycle along the suburban street. Tilt your device backward or frontward to control the cycling speed of your bicycle and touch the on-screen buttons to move left or right. For a person who have never played the original Paperboy in the arcade (a person like me), the controls are easy to grasp and the touch-responsive controls allows you to enjoy the game greatly. 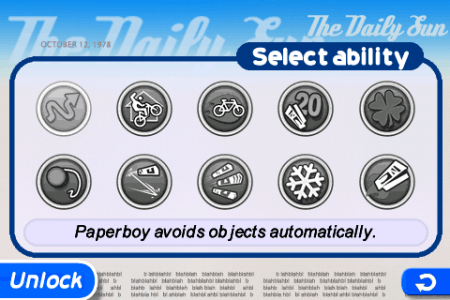 The retro looks of the original game is kept with enhanced graphics. It fits the game really well and it will remind you of the original Paperboy that you have played back in the older days.  I’m really impressed with the graphics, especially on Retina Display-enabled devices. It is nice to look at as everything is crystal clear on screen. Everything, including the menu. Also, the menu navigation is made easy with responsive touch controls, which is good.

I would say that Glu has done a good job in porting over everyone’s favourite classic game to the Apple devices. It has what you will expect from a Paperboy game, just better. It also supports multi-tasking and Game Center leaderboard on iOS4 devices, which is a great addition. You can compete with your friends in an attempt to dominate the global leaderboard. This will keep the players coming back to the game for more!

If you like the original arcade-style Paperboy, you will love this game. If you like a casual pick-up-and-play game, then this game is for you. Great replayability, more features, a new game mode, and enhanced graphics. What more do you want?