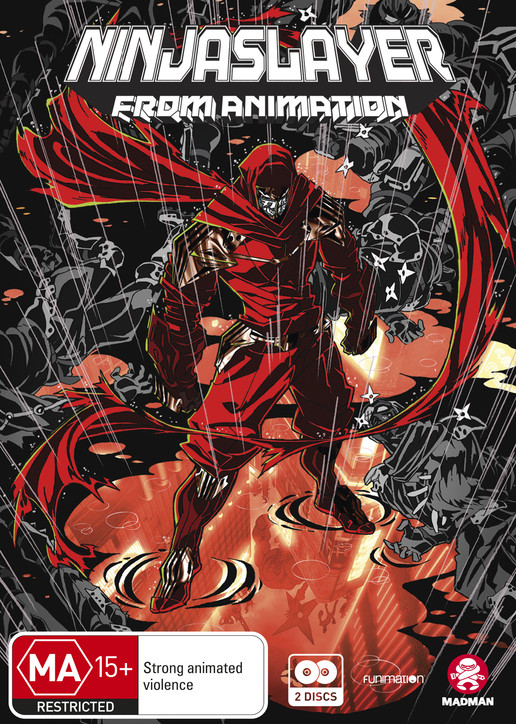 After Kenji Fujikido’s wife and daughter are killed by Darkninja of the Soukai Syndicate, he vows to get revenge on Darkninja and the Soukaiya. He meets a mysterious ninja soul called Naraku Ninja in his mind, one of many ninja souls in this world. Naraku Ninja wants to kill all of the evil ninja, and attempts to take over his body to fulfill this desire. As their minds merge, Kenji becomes Ninja Slayer. Soon afterwards, he meets a ‘journalist’ named Nancy Lee who wants to uncover the truth about what exactly is going on in Neo-Saitama. She has the ability to enter the digital world with her mind, using her brain as a virtual reality conduit so that she can hack into computer mainframes. In the meantime, a young girl named Koki Yamato merges with the Shi Ninja soul moments before she would have been brutally murdered by gangsters, and begins to lead a whole new life. Holding a ninja soul in one’s mind is no easy task, however, and it proves challenging for all. 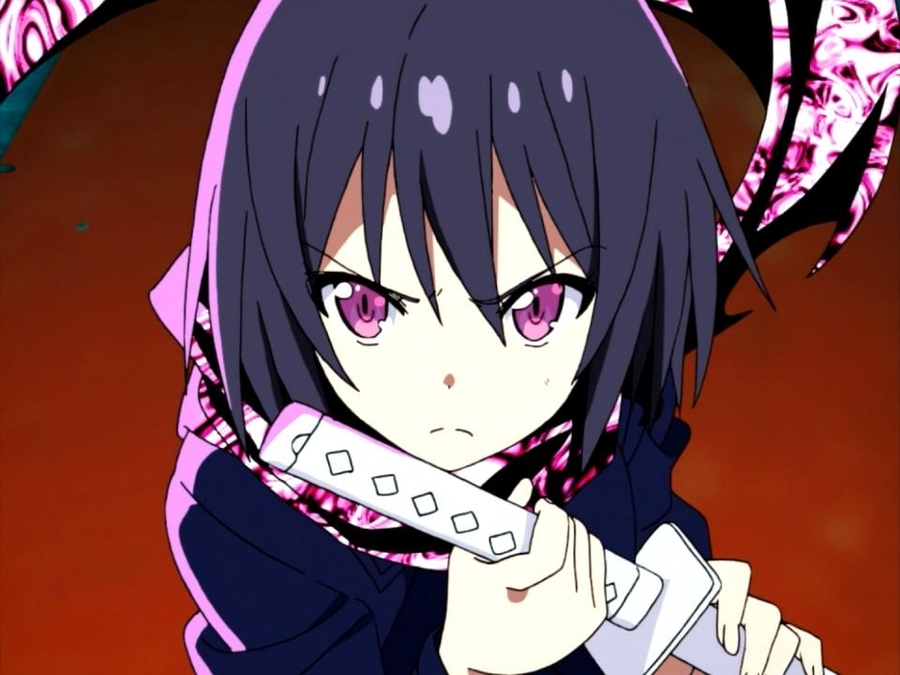 Ninja Slayer initially comes across as a parody of American interpretations of Asian action films, right down to the excessive use and over-emphasised pronunciation of the word ‘ninja’. This seems to be intentional, based on the story’s fictional back-story. The first half of the series, as well as the short story collection in episode 25, provides so much nonsensical action and violence that it would be easy to assume that the entire series is meant to be considered an excessive albeit repetitive parody. There is a plot deeper than something as simple as ‘honourable man seeks revenge on yakuza ninja’, though, and it comes to the forefront of the action as the series progresses. Some of the things occurring in the background include: yakuza ninja being cloned in an underground factory, the leader of the Soukai Syndicate running for public office despite his lack of political credentials and a young girl trying to stay alive after she has to give her old life up. These subplots are all tied together, and they provide a necessary element of engagement in a series that might otherwise have been better off as a 90-minute comedy film.

Ninja Slayer is not original, but that does not matter because of the way each of its story elements are used and combined. Introducing a cyberpunk element into a plot about yakuza ninja allows the writers to have Ninja Slayer fight high-ranking Soukaiya members while Nancy tries to steal data from them, and they are depicted working as a members of a team that need each other’s help. This helps a parody of twentieth century violent action-oriented OVAs enter a futuristic technological era. It would be hard to enjoy this series as much if it were entirely serious, but considered as a parody, it can be very entertaining.

Your individual ability to find Ninja Slayer engaging depends on what genre(s) of film and television you most enjoy watching. If crazy action caused by a desire to enact revenge on a bad guy is enough for you, then this may be one of the best anime adaptations you will ever see. If this kind of Protagonist vs. Yakuza plot does not interest you, then you may alternatively enjoy this as a throwback to the violent anime series you might have discovered in the 1990s. If neither crazy action nor parody are enough for you, then you may fall completely outside of the assumed target demographic of this series and may find Naruto a better alternative as a more serious series about ninjas. Even though the story comes to the forefront in the second half of the series, the action in the first half comes across as a repetitive, and the second half also does to a slightly lesser extent. A bad guy shows up and Ninja Slayer defeats him. It can seem a little aimless at times, and although several subplots are introduced, some of them do not seem to have much of a reason to be there. Few of these subplots are resolved by the end of these 26 episodes, giving the impression that the other characters are meant to face an ongoing battle. This lack of resolution outside of Ninja Slayer’s quest for vengeance is a little disappointing, even if it is because this is an anime adaptation and not the source material. If you ignore some of the subplots, you may enjoy spending six hours over a week or two to be an entertaining use of time. 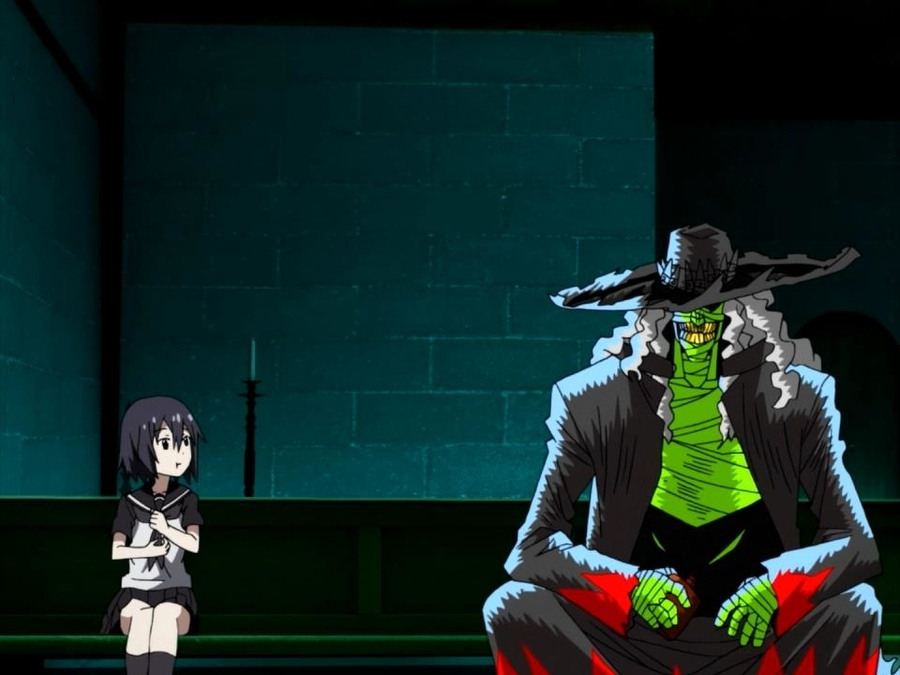 This is where things get a little unusual for those who are unfamiliar with Trigger’s other ONA (original net animation) series. Aside from being produced in the 4:3 aspect ratio until the final episode, the animation alternates between being smooth and being intentionally limited. Many scenes essentially feature shiny cardboard cutout characters moving across the screen. When they bow, their entire body moves. When they bleed, a giant stream of cheap-looking CG blood comes rushing out until the enemy explodes several times. Characters spin as if they were really in a Chinese action film, or perhaps even more unrealistically than that. It actually adds to the entertaining quality of this adaptation, even if it seems a little cheap. It might best be described with the phrase “it’s so bad it’s good.” Unfortunately, there is some over-the-top ‘fan-service’ present. Nancy Lee is often relegated to the role of damsel-in-distress, and is often shown being restrained by a monster or something else. This is unfortunately treated as some kind of joke, as shots of her screaming are repeatedly shown while something else is happening. Cutting away from the action is itself a terrible idea, but to see it done for such a despicable purpose is disappointing. Half of the female characters are rarely taken seriously by the production team, and are frequently seen from unflattering camera angles. All of that detracts from the otherwise entertaining nonsense. 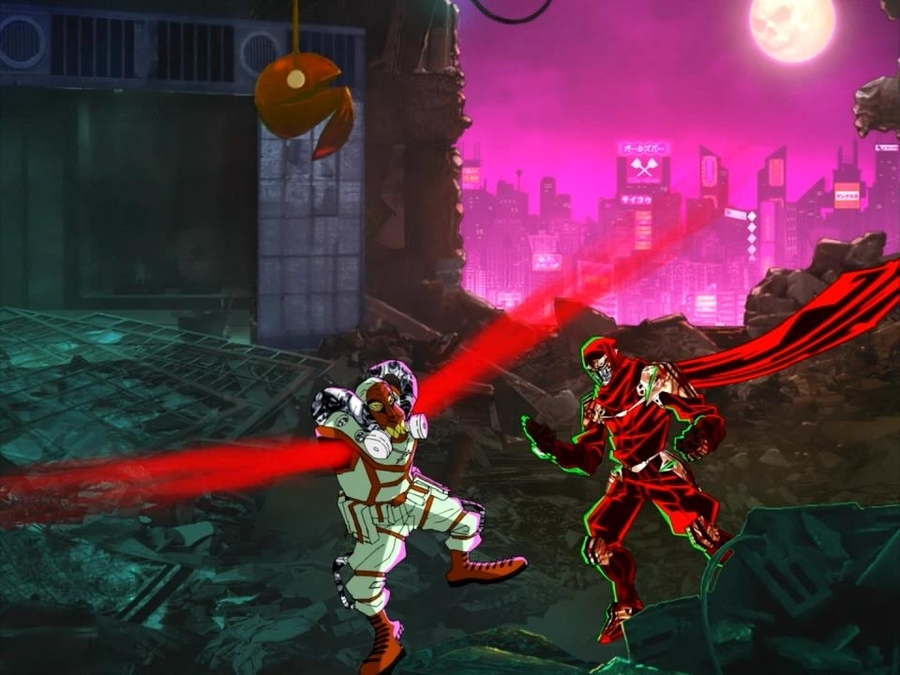 Techno music and rock music are the two styles used, and the background music sounds really cool as a result. ‘Cool’ is not the most descriptive word that could have been used, but it does accurately represent the feeling that this adaptation gives off as an apparent parody of ‘80s and ‘90s OVAs. The opening and ending theme songs are great too; the opening theme song is catchy but has confusing ‘English’ lyrics. There is a new song with each new end-credits sequence, and most of them are rather catchy, although they are unfortunately not subtitled. The English dub is also one of FUNimation’s better dubs; Japanese words used in the dub are either slightly mispronounced or clearly wrong, but the voice actors put in a lot of effort into making the dub as fun as it could possibly be. It seems as if the producers of this adaptation and the English dub team wanted the words ‘cool’ and ‘awesome’ to be the best words to describe Ninja Slayer, and their efforts show. 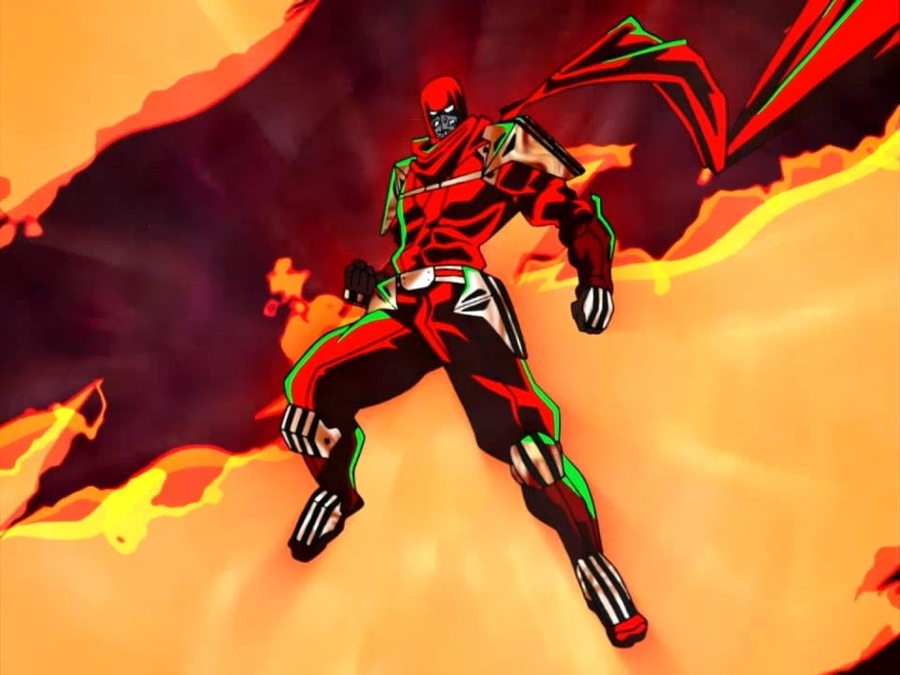 Ninja Slayer seems like a one-trick pony at first, but it does not entirely fail to be entertaining. The frequent insane action and nonsense, combined with an over-the-top fun English dub, make this a great series to watch. It is best enjoyed one episode at a time, however, until stories start being stretched out across multiple episodes. One can hope that the style of animation does not catch on with the rest of the animation industry, but aside from the problems with female sexualisation, this anime adaptation sometimes stands out in a good way. Even before Trigger’s name is shown in the credits, it is easy to tell that this comes from the company responsible for the insane anime series Kill la Kill.
Capsule Computers review guidelines can be found here.

An entertaining albeit repetitive parody of action films that goes out of its way to be as crazy as possible, often at the expense of its female characters' dignity.
7.5