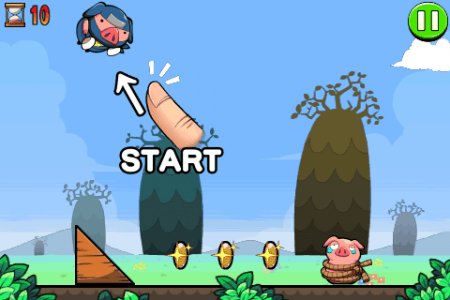 While it’s common to utter the phrase “when pigs fly” no one tends to say, “when pigs master a form of martial arts” when attempting to describe the unlikely nature of an event taking place. One reason might be because this phrase doesn’t really roll of the tongue. Another reason could be because smart-phone developers Althi’s latest game for the iPhone and iPad features a savvy swine who, despite all odds, has stuck to his goals and succeeded in becoming a ninja. Ninja Pig is out to help his fellow pigs who have managed to get themselves captured. However, Ninja Pig can’t do this with just his own cunning, he needs your help. All you will need to do is strategically place objects on the screen, and let Ninja Pig do the rest. 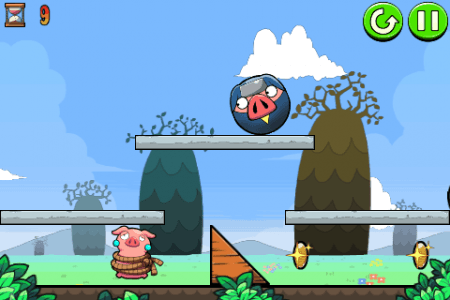 Ninja Rescue is a touch and drag puzzle game for iOS devices featuring twenty-five levels for you to test your skills against. While the levels may start off fairly simple, with direct routes available to get through the puzzle and rescue the pig, the levels become increasingly complex as you progress through all twenty-five. After you manage to save a pig you are awarded either one or three stars, depending on coins collected, enemies defeated or how quickly you solved the puzzle.

The puzzles really come to life after you click the floating Ninja Pig. Tapping on Ninja Pig will release him from his in-air suspension and drop him into the puzzle, after which it’s down to the physics of the game. This is the highlight of the game, the physics are well constructed and Ninja Pig bounces with ease as he navigates across the objects you have strategically placed. With the difficulty of the puzzle solving side of the game being rather easy, it’s nice to just sit back and watch the game function for a few seconds and hope that you’ve placed everything in the appropriate place. 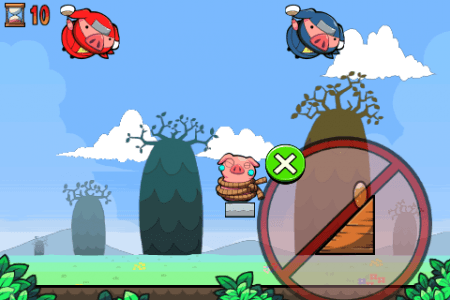 Graphically, Ninja Rescue won’t blow you away, casual games for iOS rarely do. However, this isn’t to say that Ninja Rescue doesn’t possess some well-designed and executed graphics. The background for the green field levels, which at the time of this review is the only level available, is suitable to the description. A few cute yet twisted tree/mountain hybrids sit in the back with some low shrubs in the foreground. This background is used as a skin for all twenty-five levels. While it’s possible to argue that this becomes a bit repetitive, it really helps focus on the task at hand. My favourite design feature is Ninja Pig himself. Before the puzzle starts, Ninja Pig flaps his fans to stay a float in the air. Sitting their mid air in his ninja outfit, you can’t help but want to help him on his quest to save his fellow pigs. 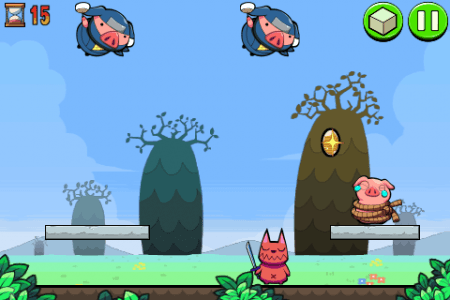 In terms of the audio, Ninja Rescue features some quirky sound effects; popping and clicking when objects are moved, sad yelps when the timer runs out and little piggish grunts when Ninja Pig bounces from objects. The music provides a nice atmospheric background for stealthy ninja missions, but with slight optimism to suit the friendly brand of graphics. 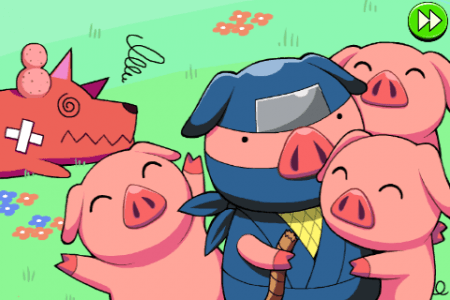 The puzzles aren’t overly challenging, unless you are aiming for perfect scores on every level. Also there are only twenty-five of them and it won’t take you long to get through the game. Luckily, Althi plan to have those who are quick in puzzle solving covered and have a “coming soon” section in the select area menu of the game. Overall the game has an interesting premise; some well designed puzzles, fantastic physics and some pretty cute graphics. Ninja Rescue has all the elements you could ever ask for in a casual puzzle game, and considering the game is free it’s well worth investing some time in.