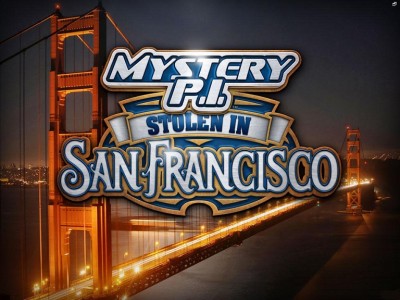 “A fortune in gold has been stolen and you’ve been hired to find and return it before the trail goes cold and it’s lost forever. Seek & find more than 2,100 hidden objects in 25 amazing San Francisco locations — from Alcatraz to the Golden Gate Bridge, Haight-Ashbury and Fisherman’s Wharf — and track down the stolen gold!”

You are a Mystery P.I. Yes, you are an expert at decoding pictures, and you have an opportunity to be a millionaire once more. (What happened to that 20 million you got in your last adventure?!)  PopCap is back at it with Mystery P.I. Stolen in San Francisco, another sequel to the Mystery P.I. Series. Someone in San Francisco has stolen a plethora of gold, and it is up to you to find it. Find the gold in 17 hours, and 20 million is in your hand.

To be honest, the story in this game is pretty weak. There is an explanation at the beginning about the gold being stolen and your reward. There is also a fantastic puzzle at the end that wraps up the experience nicely. However, during the middle, there is literally no explanation. Even when you find clues, it doesn’t explain how it relates to the puzzles just solved. However, at the end, the final puzzle does make sense of many of the clues, but more of an explanation would’ve been appreciated in those long middle sections.  This type of game obviously doesn’t NEED a story, but it begs the question why there is even a story in the first place. It would definitely be possible to just play the game “as is” without a story. The only reason I can think of for a story is to give the player an objective, and 20 million sure is good way to push you along. 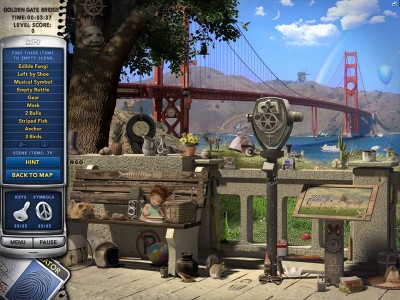 Gameplay consists of selected a predetermined screen, like a trolley car, and then finding 10 items in that screen. Quickly spotting different items will net you a speed bonus. In addition to these 10 items, there is one key, one peace symbol and a flashlight to be found in each screen. Finding objects that have been right in your face all along is at once thrilling, humbling and funny. After two to eight of these screens you are tasked with solving a puzzle like Simon Says, Spot the Differences, Match Three or putting a jigsaw of a picture together. In the beginning, it was simple and addictive. Later, the game gets harder but still manageable. However, it loses its some of its addictiveness and begins to feel like grinding. Most all of the screens are reused at one time or another, and it can be very boring looking at it over and over again. On the other hand, this does have some advantages. For example, if you missed a key or peace symbol in that particular screen earlier, you now have a second or third chance to find it. Also, although the 10 items to be found are different, the screen doesn’t change. As a result, if you remember seeing an item last time around, you can very easily find it. The game’s final puzzle, as mentioned above, is a breath of fresh air, and it would be nice if they would have used more originality like that when they designed the full game. Although the game can get to be very boring, it is a nice way to relax without straining your brain cells too much. It could also be a very welcome addition to a road trip. Another way this game is fun is if you play with it a friend. 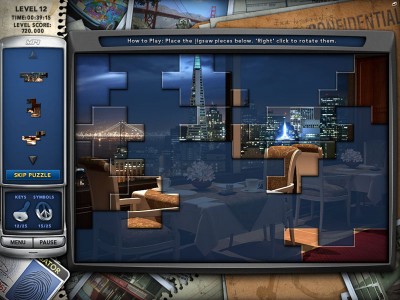 There are two other game modes as well. To unlock these, you must find each key and peace symbol. These modes consist of unlimited seek and find and the match 3 game. Unlimited seek and find, as its name implies, is going through the repertoire of 2100 items and trying to find each one. Match 3 involves matching 3 different symbols together. Clear the board by matching all the symbols. These game modes don’t really add anything new, but they do add some replay value if you are done with the main game.

One other complaint about the game was that occasionally some items would refuse to register that they had been clicked on. Even if I was sure that that was the right item, even if I used a hint, it would take many clicks to finally prove to the game that those items had indeed been hit. This was not a game breaker, but the game would subtract points if you clicked too many times without finding anything. 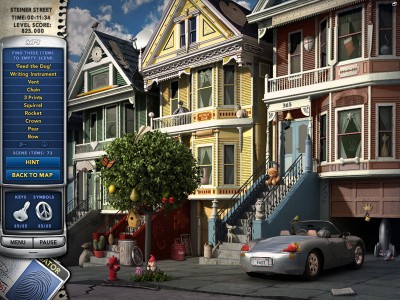 The game’s soundtrack sets the mood of the game. I can’t really give an example of what it sounds like, but the Law & Order theme with a less dramatic feel would be about right. Although it drew me into the experience at first, having it go on repeat for 7 hours was tedious. The only other sounds are if you find an item, use a hint and when you complete a level or rank up.

The graphics are nothing to write home about, but they are also not the worst.    However, they are filled with a large variety of pictures and items. Many of these are quite humorous. For example, an eye exam chart with the letters E3. Or a rhino in an Italian vineyard.

What Mystery P.I. Stolen in San Francisco reminded most of was an I, Spy book. However, this I, Spy book had some sounds and puzzles plus an inkling of a story. If you love I, Spy books, puzzle games or PopCap, you should give a try. Otherwise, look for something a little more exciting.

I give Mystery P.I. Stolen in San Francisco