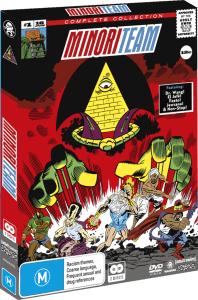 These days, racial stereotypes make for great comedy. Russell Peters, The Simpsons, and pretty much every other film/television show/comedian/human being utilises race as a ploy for some easy laughs. It stands to reason, then, that an animated television series based solely on racial stereotypes should be side-splittingly hilarious.

Perhaps it was my high expectations, but Minoriteam just didn’t seem as spectacularly funny as I had hoped. Instead of collapsing in stitches on the floor and swearing because I was laughing too hard, I found myself saying “what the…?”. Instead of quoting things from the television series to my friends, I found I forgot an episode soon after I watched it…and really, the strongest thing I felt after I watched Minoriteam was disappointment.

Minoriteam tells the story of Doctor Wang and his team of superheroes who all have their own racial or ethnic stereotype. Using the power of their racial stereotypes, the superheroes have their own superpowers: Dr Wang is The Human Calculator, El Jefe is the master of the Leaf Blower 3000, Fasto is the “fastest man that ever was and is”, Jewcano has the power of Jewish faith and a colcano, and Non-Stop has lead skin after being shot too many times. Together, Minoriteam fights against discrimination in the form of the White Shadow, Racist Frankenstein, and The Corporate Ladder. 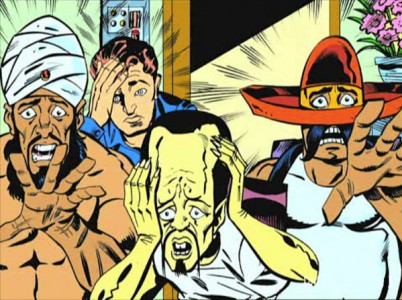 Yeah, it sounds so great on paper. The storyline was what really drew me to this series: I took one look at the blurb and burst out laughing. However, I think what happened in Minoriteam was the writers put more effort into the humour of the overarching storyline and neglected the individual episodes. The storyline of each episode was a hit and miss: some episodes had me laughing and others really had me more confused than anything else. I really enjoyed “His Story”, where the White Shadow travels back in time to try and stop Minoriteam from coming into existence, but “Operation Blackout” where the White Shadow tries to stop black businesses from gaining power was a dull episode.

From the overall plot and the characters, it’s clear Minoriteam was made for an American audience. So many parts I think were supposed to be funny, but because I didn’t have that background I ended up becoming very confused. I’m a firm believer that any series can be universally funny and AdultSwim really missed the mark on making this series as universally appealing as it could have been.

The main characters are the superheroes, and of course, their nemesis The White Shadow. The characters themselves are great at conforming to their racial stereotypes…whether or not it’s funny is another thing altogether, though. 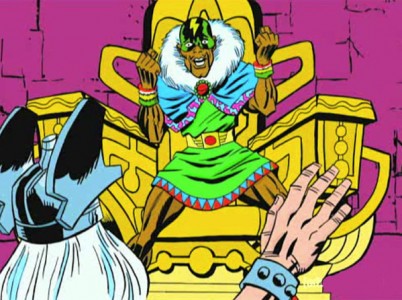 Fasto, one of my favourite characters from the series.

One of the great characters that always made me laugh (and was a wonderful representation of a racial stereotype) was Dr Wang. From his accent to his buck teeth and oversized forehead, I have to say that this guy is the winner by far when it comes to my favourite Minoriteam member. It might be my Asian heritage as well kicking in, but I’m also glad that I understood every joke he was making or every joke that was pointed at him. The other great character was Fasto: he swears a ridiculous amount, always has something funny to say, and really just acts like the walking racial stereotype I would expect from this series.

Most of the other characters were all right at times, but it just seemed to me that the writers were trying too hard to make them funny. The White Shadow, in particular, was a terrible attempt at a stereotype: he was flat, dull, and probably the most forgettable nemesis I’ve ever come across in my life. The rest of Minoriteam have their funny moments occasionally, but Jewcano and Non-Stop sometimes tend to take too much of a backseat in episodes to justify their role in the series.

Minoriteam’s animation looks like someone took a comic book and literally just animated all the characters in it. The series is two-dimensional, and comes complete with the “Boom”, “pow” and “zoom!” splashed across the screen, similar to the way text effects are sprawled across comic books. 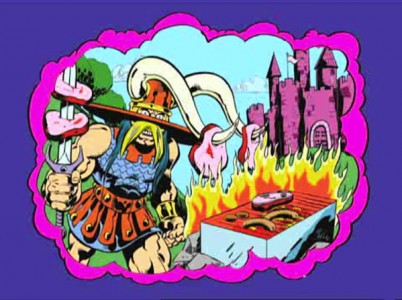 The animation is absolutely great and looks like a real comic book series.

In my eyes, the animation was perhaps the best part of this entire series. While everything else was inconsistent, the animation style was original and looked great. I have never really watched another animated series with quite that level of comic-esque intensity: the colours were rich and the characters really did look like a comic strip had just been brought to life right in front of your eyes. The characters were also drawn to represent their racial stereotypes brilliantly: without even being told, I could guess which minority each of them was supposed to represent.

The animation can be a bit too much to take at times (with all the colour and bold lines) but the eyes do adjust. It was confusing for me to watch the first episode just because I was overwhelmed, but I grew to love it.

The voice-acting hits the mark in this series, which is a relief considering how important voices are in animation (and in particular, for voice-actors who need to convey races and ethnicities). Fasto’s voice in particular was perfectly suited to his character and it always livened up any episode which was becoming dull. Dr Wang’s was also a great fit, and basically everything he said was made more funny by his voice-acting. The best voice though, was the narrator’s. In comic books, the narration which guides along the story is a vital part of the experience, and Minoriteam translated this perfectly into animation with their narrator’s voice. 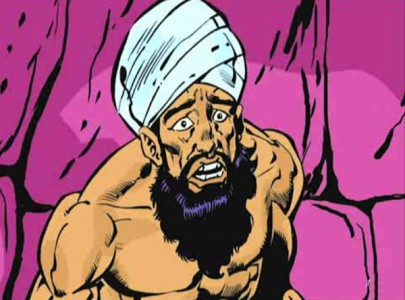 One of Minoriteam’s heroes, Non-Stop.

The sound effects were also very well done. As I mentioned earlier, Minoriteam features the use of text like “Boom!” across the screen, but there are also sound effects which accompany this. The effects are well-synced and all suitably chosen for their respective moments. The soundtrack was also great – it had that ‘superhero’ air to it but at the same time it didn’t take away from any action that was on screen.

The DVD comes with episode animatics, storyboards, concept and production art gallery, the episode scripts, and the original pitch (or the original pilot). It was great to watch the original pitch, but everything else truly was forgettable. There’s only so much time I can look at storyboards and scripts for before they become absolutely tedious, and I think that it would have been much better if the DVD had just skipped all of those and just included the original pitch and possibly some deleted scenes.

While the concept is good, the execution left a little something to be desired. There was nothing wrong with the technical side of Minoriteam – all the animation and sound hit the mark – however a vital thing was missing: that comedic effect. Overall, Minoriteam was a decent experience the first time around, but I can assure you that I will probably never watch this series again.