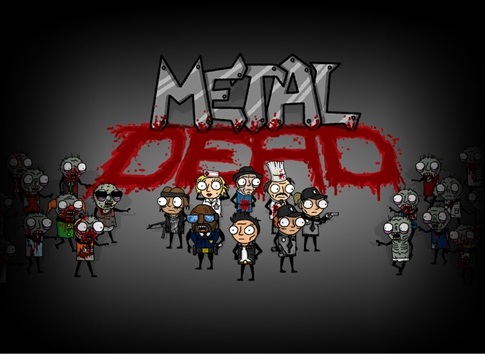 The first  in a planned trilogy, Metal Dead boasts what must be one of the ultimate genre mash ups – a zombie apocalypse survival horror metal comedy adventure game . Whew. It’s the work of independent game studio Walk Thru Walls, a developer with the ever commendable aim of making fun and funny games from their studio in Brisbane Australia.

Obviously made with a lot of affection for the adventure games of Lucas Arts and Sierra, Metal Dead manages to tick most of the boxes on it’s very busy list, and with a few tweaks could promise one very entertaining trilogy for the point and clicker’s out there. 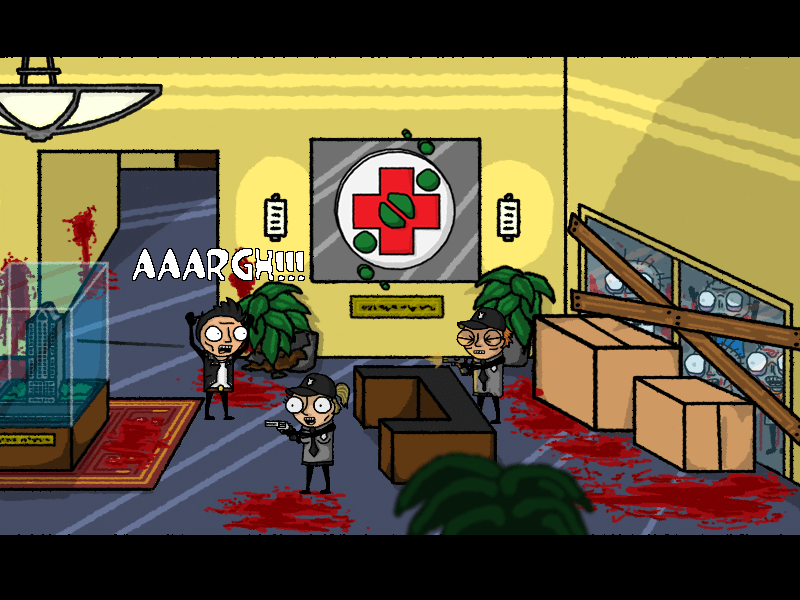 The main plot of Metal Dead adds another load to the zombie bandwagon, with an undead apocalypse sweeping across a city and converging on the building of a slightly suspicious medical research company. The less than fresh plotline is helped along by some barmy characters and bizarre set ups, and the point and click genre removes much of the staleness that now goes hand in hand with yet  another zombie game syndrome. Two characters will get the lion’s share of attention – metalheads by the name of Ronnie and Malcolm.

After crashing their car outside said medical facility, Malcolm finds himself surrounded by zombies with one dead friend on his hands. What happens next is a great indicator to the tone of the rest of the game, as Malcolm finds himself aiding a mad professor to decapitate Ronnie and turn his head into a portable zombified hint machine. It’s an ingenious way to keep the two together whilst having only one playable character, and the dialogue that pops up between the two friends (largely stemming from the fact that Malcolm keeps Ronnie in his pants) throughout the game ensures a constant supply of comedy. There’s not much that’s off limits for Metal Dead – see the screenshot below for evidence!

Malcolm must solve puzzles and collect elevator clearance cards to work his way ever closer to the top of the building, where a helicopter awaits him and the other survivors. On the way Malcolm runs into an over zealous police officer, some bored stoners, a doctor trapped in a closet by a giant mutant cannabis plant – you get the idea. Metal Dead nails it when it comes to tone, the script carries off the ‘alternative’ humor very well and it isn’t afraid to poke fun at itself. There are pop culture references thrown in there too, and adventure gamers in particular will spot quite a few.

The ending provoked one of the purest WTF moments of recent memory, and despite that has a bizarre hook to it that somehow makes me want more. Metal Dead is a bizarre beast for sure, and in this genre that’s nothing but a good thing. 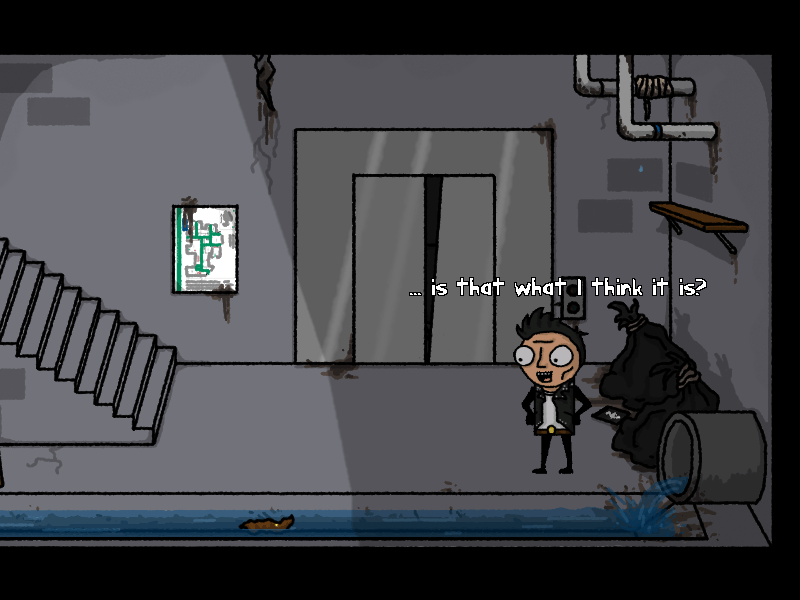 This is a traditional point and click adventure, with the right mouse button scrolling through actions carried out by the left. Mal can talk, investigate, interact and walk, coming complete with plenty of humorous responses to less than appropriate moves. One downside is that you can’t just click on a door to walk over to it and go through it, but it’s a minor irritation at best. Solving puzzles and completing tasks for other survivors earns Malcolm new security cards and access to new levels, and despite a bit of backtracking there’s a good variety to the puzzles, which are solved through the usual means of combining and using various objects collected throughout the game.

Adventure game puzzles can often remove all sense of logic in the name of keeping up the comedy quotient, but Metal Dead manages to keep the solutions to its puzzles on the level. Whilst the situation and what you’re doing may be somewhat insane, it all makes sense in its own unique zombie apocalypse kind of way. It is perhaps too easy on the old think tank, but at least there are no completely baffling object combinations or actions. Ronnie is always on hand to provide some hints if you do get stuck, so make sure and consult your severed zombie head in times of crisis!

Ok, so the art style of Metal Dead isn’t going to blow you away. It’s very simple, albeit packed with bright colors, and it has the distinct air of Microsoft Paint about it. But it fits the theme and feel of the game perfectly – metal heads battling zombies in a point and click adventure game couldn’t really look any other way! The cartoon style allows for plenty of gore and various other excretions, and also let the game flit past Australia’s infamous ratings board with an MA15+. 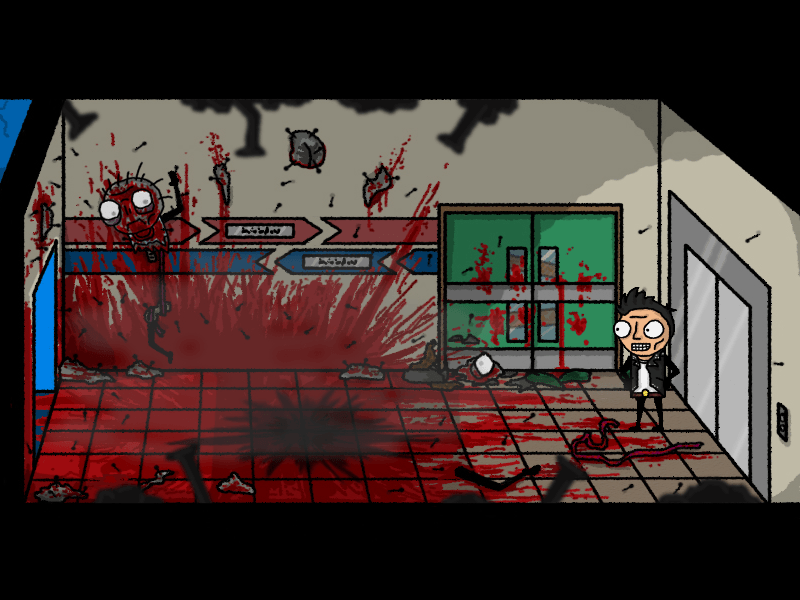 Character models have lots of detail and the animations manage to pull off plenty of personality despite the lack of voice acting. The larger than normal sprite size and cartoon style allow for a visual that is clearer if less stylish than genre counterparts like Gemini Rue (both were built using the same engine).

The audio does let Metal Dead down somewhat. Whilst the background tracks are fine within themselves they do become repetitive rather quickly, and for a game where one of the inspirations is metal, there isn’t a whole lot of it around at any decent volume. The theme is nicely woven into the plot – zombies don’t like complicated loud noises – but the ‘metal’ here is more to do with how the main characters react and speak than the music. It does crop up on occasion, but Metal Dead could benefit by cranking up the volume.

The MIDI soundtrack doesn’t help matters, and it does add to the creeping feeling that you could find something much like this for free on the Internet.  Metal Dead is lucky that the writing and solid gameplay hold up a presentation package that from an audio point of view isn’t comparable with the best indie titles out there.

Metal Dead will win you over – no questions asked. It’s funny and bizarre in a way seemingly unique to adventure games, and has plenty of personality in its main characters to keep the trilogy running. It is a bit on the short side clocking in at 3-4 hours rather than the advertised 5-7. And as far as replayability goes – there is none. What it does have is humor and spark, the key components of any good point and click, and with a few tweaks here and there and a bit more ‘metal’, Walk Thru Walls could have something great on their hands.