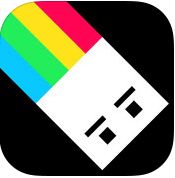 Overview
Video games have progressed in leaps and bound since the dawn of their creation. Its become that game characters are so realistic that they bear the likeness of real people. Millions of points of detail are used to create these true to life figures…But that’s a lot of effort. Why bother when you can have boatloads of fun with just one pixel? 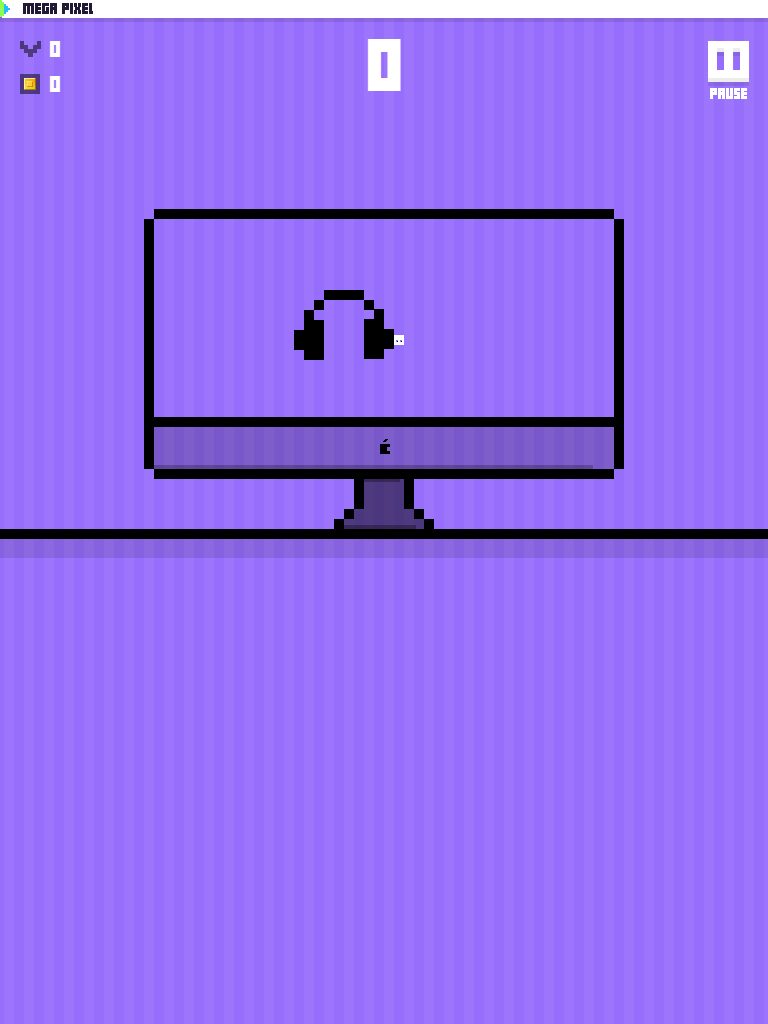 Gameplay
Mega Dead Pixel is a genre unto itself. A self proclaimed Arcade Retro Pixel Endless Faller, or AARPEF for short, the game provides you with your own little one by one pixel buddy to control. You may move Pixel left and right with the directional arrows provided, whilst you automatically fall downwards. The main aim of the game is to fall and try your hardest not to die, a simple principle. Littering the screen however, are a number of obstacles designed to impede your descent. These objects take a number of shapes, from swords, to space invaders, to simple one by one pixels just like you…but stationary and evil. By touching the edge of these shapes on your eternal journey downwards, you are able to paint them to increase your score. This is a dangerous game, as one column too far and pixelly death shall rain down. You can, however, boost your defensive capabilities by collecting white pixels scattered across the level. For each collected, Pixel will increase in size. The larger you make him, the faster he will fall. Whilst this makes the game a tad harder, it also provides you with the ability to take hits equivalent to your new size. Each time larger Pixel suffers damage, he will whittle down until he returns to his basic form. 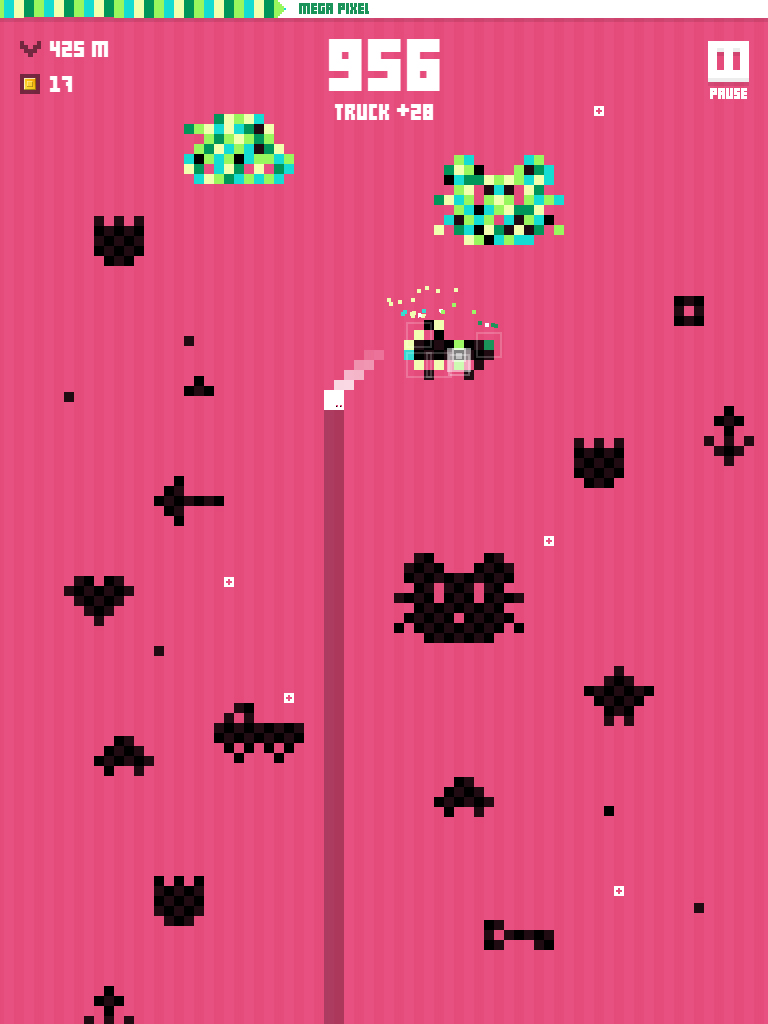 Colours and shapes a plenty

On the topic of size, you may also have the chance to activate a super ability, known as Mega-Pixel. By painting a number of objects in rapid succession, Pixel will transform into a massive size and fall…fast. Be careful though as you shred through the screens as, along with racking up mondo points, you will very quickly whittle Pixel down into little Pixel. There is no amount limit to this power, so feel free to use it as many times as you want per level, though you’ll have to paint fast. You are also capable of destroying shapes whilst not in Mega-Pixel mode, though you will need to upgrade your form. Essentially you trade white pixels for objects as you crash through them, though the score you gain is directly proportionate to the size of the object. You may also gain additional objects to spread across levels by purchasing them with the currency of the game: gold pixels. Sensing a pattern here?

Along with additional shapes, gold can also be used to purchase music, revive tokens and even hats for Pixel, to liven up your day. However, there’s one thing that every gamer understands and wants: power-ups. As you progress through the game and build up a nice little stockpile of gold, you gain access to bonuses that will be added to each level. You may acquire an increases painting range, an invincible shield, pistols for shooting and even an instant Mega-Pixel power. Naturally these are time limited power-ups, so use them wisely. 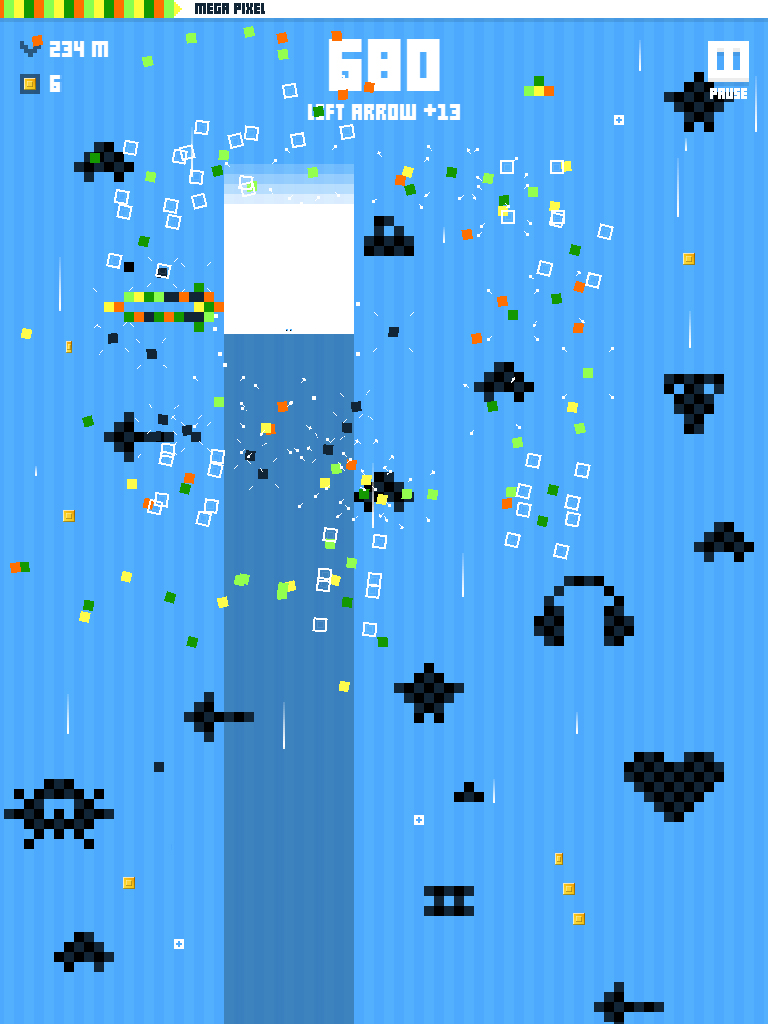 With each level you complete, you are presented with missions to complete. Starting off easy, they can be as straight forward as falling one hundred metres in a single drop. As you complete them, they progressively become more difficult. After a certain point, the game provides you with three missions to complete in each run…if you are able. They also mix it up a little with new objectives, like painting twenty five blocks, reviving yourself and activating Mega-Pixel. These give the game a bit more variety, providing you with goals to accomplish…whether or not you can actually do it is up to you though. Every point you earn throughout your numerous runs gathers in a single pool. Once you reach a certain threshold a Pixelwall is unlocked, granting you a new object in the Shop along with a special background. The game also explains that when you reach a certain total score, you will unlock a secret. I wonder what it might be. 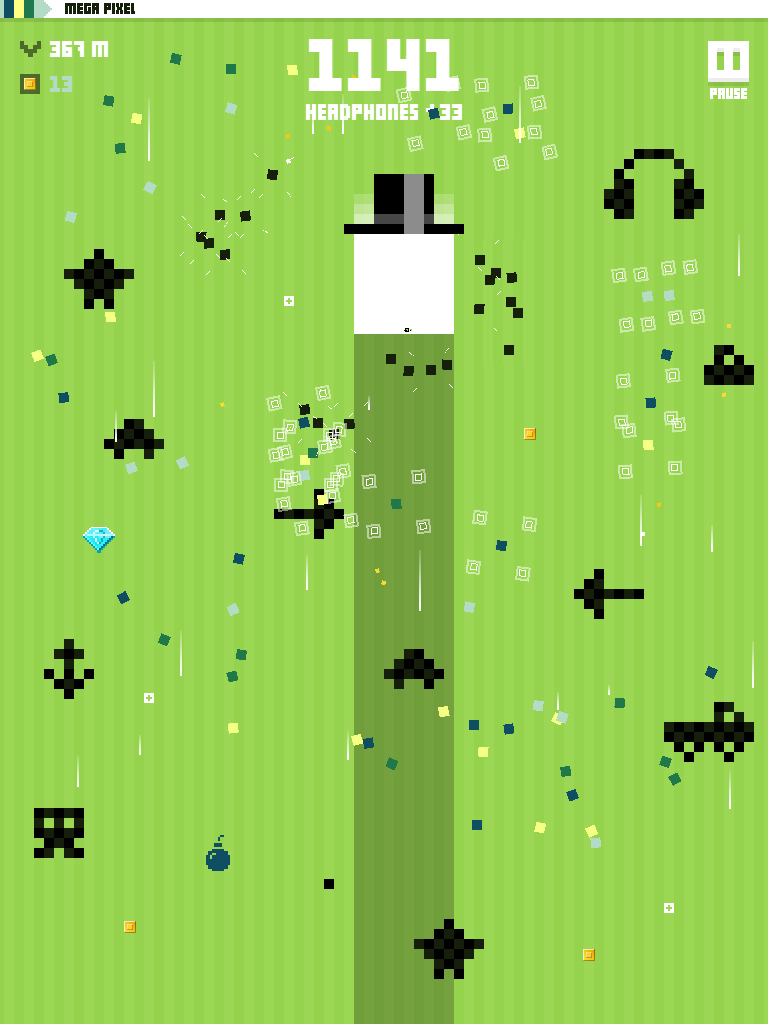 What a well hatted fellow

Visuals and Audio
Centring around a single pixel protagonist, Mega Dead Pixel possesses a naturally simplistic style. Pixels everywhere. Shapes made of pixels, coins made of pixels, protagonist made out of pixels…pixels. This, quite obviously, gives the game an old schools style, which it is fully aware of. Note the Space Invaders whip scattered amidst the obstacles. That being said, the game certainly is colourful. With our hero and all related power-ups being white, it isn’t difficult to tell which pixels to aim for. This also contrasts with the black pixel objects, immediately showing you which objects to avoid…or just barely touch in order to paint them multicolours.

The game also throws a techno/chiptune soundtrack at you to draw you into this pixel world. Featuring ten tunes in all, there’s a fair variety to listen to. There is also an option for you to choose which song you want to hear as you play, with a randomise option included. During each level, you will also notice  sound effects as you perform various tasks. Each of these are different enough from each other that you will immediately know what just happened, be it good or bad. 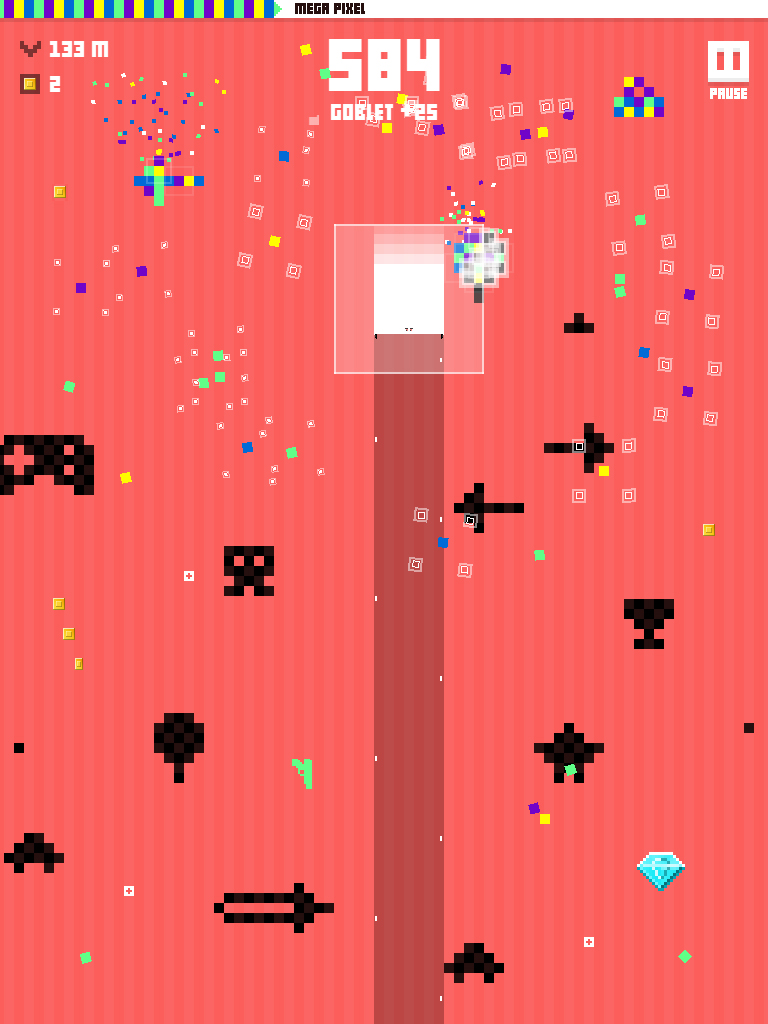 Overall
Mega Dead Pixel is simple, both gameplay wise and visually…and that’s part of what makes it so damn fun. The game knows what it is and plays to it beautifully. Its colourful, provides you with enough incentives to want to play it and has some pretty sweet chiptune beats. You fall, you paint, you explode, you start over again.