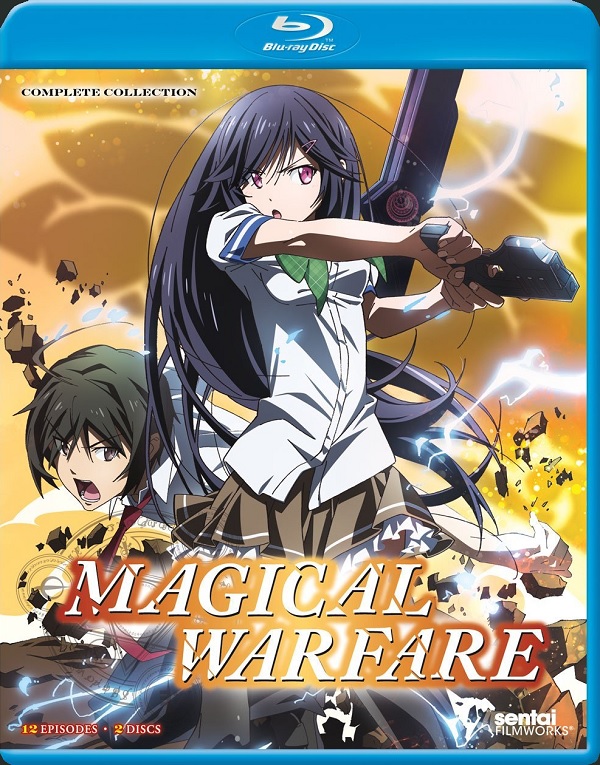 Overview
With the anime industry digging deep into the light novels that are being heavily produced in Japan, it is easy to see why certain series get snatched up and given anime adaptations. On paper a series like Magical Warfare seems like it has a lot going for it and considering the source material is already at twelve volumes there is plenty of content to draw from. That being said, now that Sentai Filmworks has brought the anime adaptation to North America is it worth your time?

Story
Magical Warfare takes place in a world where after being persecuted for years, those capable of magic began to rise up and a great war took place in the year 1999. During this war wizards battled against one another as one faction wished to wipe out humanity so they would be free from persecution while the other fought to defend the world. After a major conflict, the world was torn asunder and while the standard Earth still exists by the name of “Existing World” the magicians almost entirely reside in a mirrored realm known as the “Collapsing World.” 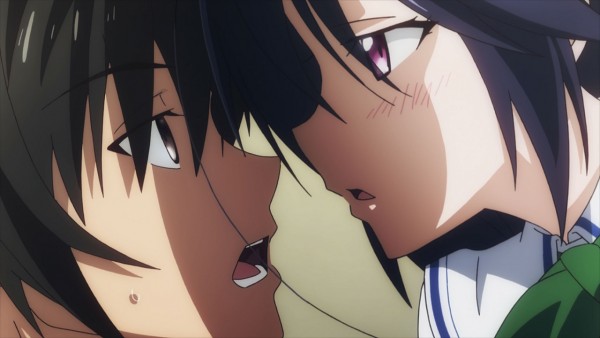 Before falling into a deep sleep the strongest wizards at the time created something known as the “Gift” that prevents any magicians from fighting in the existing world. Those that injure other wizards using magic in that realm will suffer from a complete and total loss of their magical abilities and revert back to being normal humans. On the opposite side of the spectrum, the collapsing world is a nearly free battlefield where only a few neutral areas remain, especially since for convenience sake that realm has deteriorated to only containing Tokyo.

The story begins proper when Takeshi Nanase arrives at his school only to find that an unknown girl has collapsed next to his club room. After taking her to the nurse’s office she proceeds to sleepily cling to him and call for her brother before waking up, pulling out a gun, and shooting at him. Once the girl calms down, she tells Takeshi that her name is Mui and it isn’t long before a group of enemy wizards appear chasing the girl. 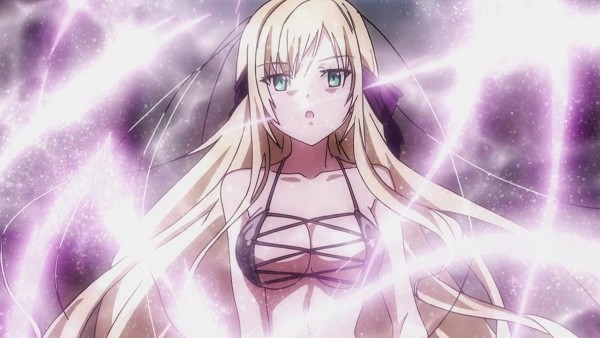 While Takeshi fends them off he realizes that he now possesses strange abilities and is told by Mui that he has gained Evasion magic. After encountering these foes it turns out that both Takeshi’s fake girlfriend Kurumi and friend Ida have also gained magical abilities since in this world those who are exposed to any sort of magic while they are young suddenly become wizards and since the “Gift” doesn’t apply to magicians hurting humans, which is a rather strange oversight, the three find themselves with new abilities and instantly decide to leave their old lives behind and travel with Mui to the other realm where they enter a neutral school meant to teach fledgling wizards from numerous factions about their abilities.

One of the first impressions that Magical Warfare makes in regards to how serious things are handled comes in the first few minutes when Takeshi, wielding a bamboo sword, directly blocks and clashes against an opponent wielding a two handed metal blade multiple times before his weapon breaks just in time for a final attack that allows the him to escape. This type of simplistic handling of a flimsy weapon standing up to a weapon that easily should cleave through it is a good example of what to expect from the series that then hands the main character a powerful ancient sword from the school store that is capable of using his friends’ magical powers as boosts to his own. 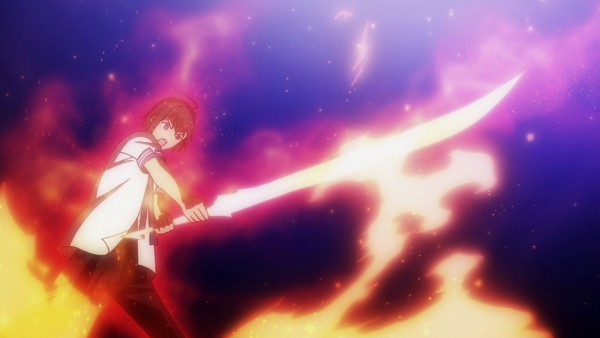 The hinted tragic backstory of Takeshi and his family is eventually revealed to be something incredibly simplistic to the point of being laughable, especially given the serious tone the series tries to pull with it, neither Ida or Kurumi receive any decent development outside of the predictable love triangle that forms when Kurumi, who despite the fake nature of their relationship harbors feelings for Takeshi, realizes that Mui also begins to feel for Takeshi, and the only real storyline that involves Mui attempting to free her brother from being controlled by a violent faction known as Ghost Trailer, is resolved halfway through the twelve episode season.

Outside of being involved in the love triangle both Kurumi and Mui are only given small bits of development here and there as we learn about why Kurumi and Takeshi formed a fake relationship in the first place and while Mui may be the main heroine in the series, viewers do begin to care at least a little about both of the two by the time things wrap up, though Magical Warfare falters in that regard as well. 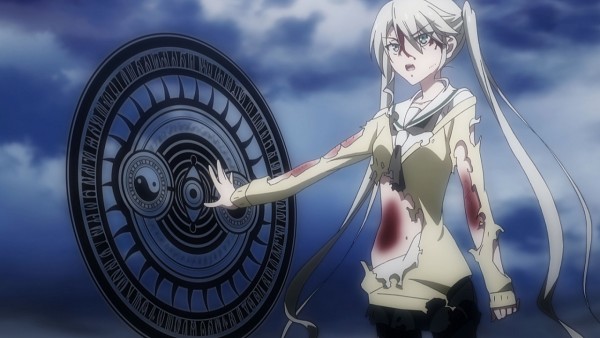 Any sense of conflict that arises in Magical Warfare is handled incredibly poorly and while it may have worked well if the series were properly paced but unfortunately what we have here is something of a wreck as new characters and elements are introduced and quickly forgotten about. There are efforts made to try and develop the world that these characters are living in and how certain events are related to one another but it ultimately becomes a convoluted mess that ends up panning out incredibly poorly by leaving viewers with a cliffhanger of an ending.

Visuals
Animated by Madhouse, Magical Warfare may sound as basic as they come but does look rather good in the process. The characters aren’t very memorable looking which is unfortunate but the combat scenes, as ridiculous as some of them are, are presented with fluid motion with plenty of care given to make sure the magical spells used by the fighters look as good as possible. 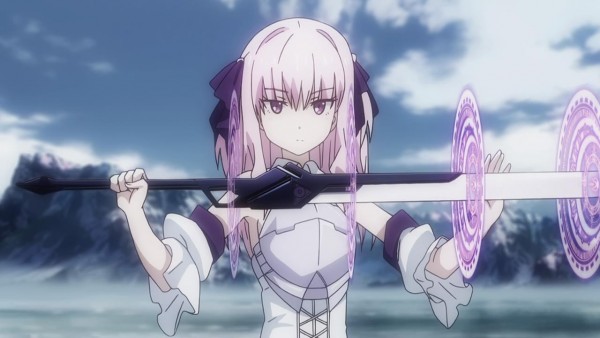 The backgrounds throughout the series are something of a mixed bag as the standard designs of the schools are far from special though any time the scenes shift outside the school or provide glimpses of the antagonists’ movements viewers are treated to some very impressive looking environments with just the right type of atmosphere to match the foreboding nature of what is being shown.

Audio
Oddly enough considering the quality of the series, Sentai Filmworks has decided to give Magical Warfare an English dub to accompany the standard Japanese voice track. The English cast handles their characters well and the various magical incantations used to cast their spells sound better in English, though comparing the two tracks it feels as if Mui’s personality is presented better by her Japanese voice actress Nao Touyama as opposed to Allison Sumrall in the English dub. 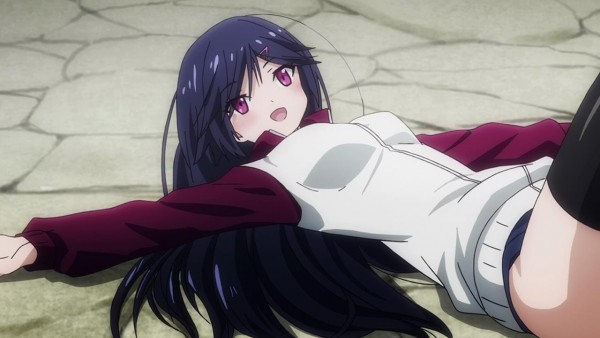 One thing that does stand out in this series is the way they handle the soundtrack. There are a number of vocal insert songs that work incredibly well when paired up with the action scenes, making for a few impressively presented moments. Accompanying this impressive soundtrack are two fitting themes with “Senkou no Prisoner” by Yuuka Nanri as the opening theme and “Born To Be” by Nano serving as a memorable ending theme.

Extras
Sentai Filmworks’ release of Magical Warfare contains only clean versions of the opening and closing animations as well as trailers for other Sentai Filmworks releases.

Overall
Magical Warfare feels like the type of series that we have seen numerous times before and does almost nothing to stand out in any significant way. If anything it falls apart upon any type of scrutiny especially when it comes to trying to convey a serious story while providing laughable reasons for why the characters are actually fighting. Combine that with the way Takeshi and his friends are handled and you have a series that is as by the books as they come only worse making it one that fans can easily pass over unless they feel like checking out some poorly paced magical conflicts.
Capsule Computers review guidelines can be found here.