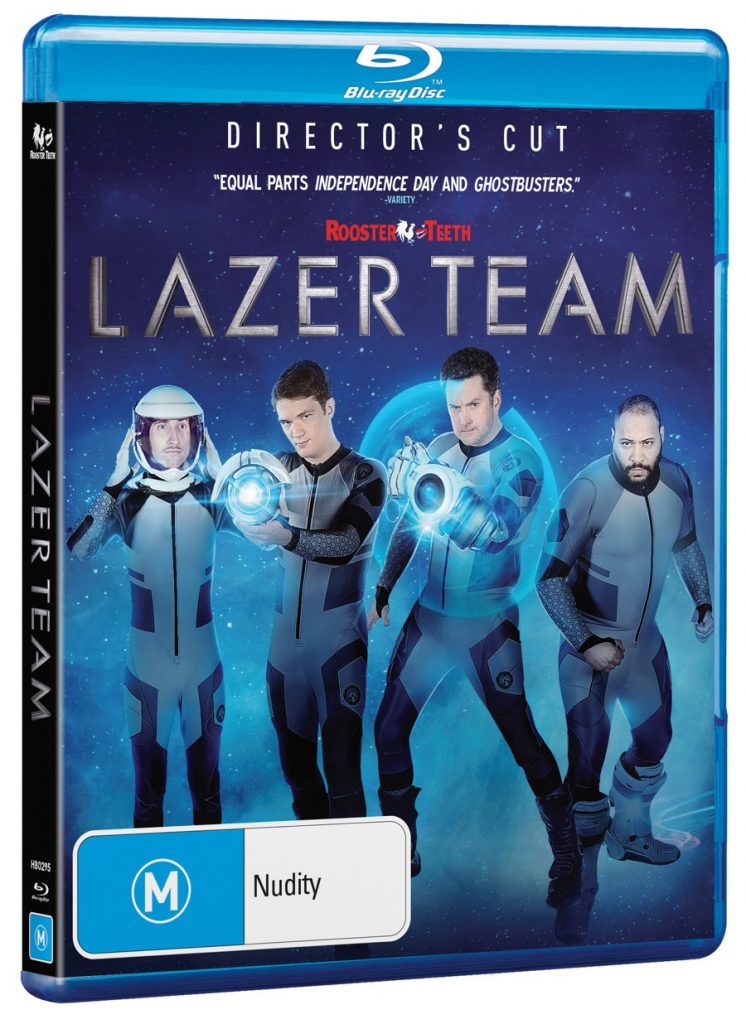 Four decades ago, the U.S. government decoded a transmission that revealed the existence of extraterrestrial beings known as Antareans. They learned from the Antarean transmission that an alien race known as the ‘Worg’ will come to destroy Earth in the future. The Antareans promise to send a battle suit to help the ‘Champion of Earth’ protect the planet when the time comes. The U.S. army selects a person to be trained to fulfil the role of Champion of Earth and wear the suit. This person, Adam, trains throughout his whole life in order to protect the Earth from the eventual Worg invasion. In the present day, troublemakers Herman and Woody receive unwanted attention from Officer Hagan after illegally setting off fireworks. Hagan arrives on the scene with arrested delinquent Zach in the back of his car. Instead of listening to Hagan, Herman sets off a rocket that destroys the UFO that was supposed to deliver the battle suit to Adam, causing the pieces of the suit to fall to the ground. Naturally, the three troublemakers decide to try on the pieces of the suit themselves. Officer Hagan accidentally puts on the final piece, causing the individual pieces of the suit to activate and biologically link themselves to their wearers. The four, now known to the rest of the world as the ‘Lazer Team‘, must now save the planet with the help of Adam and the extremely reluctant U.S. government.

The plot of Lazer Team presents an idea found in many Japanese mecha series. A person unwittingly becomes the pilot, or in this case wearer, of a weapon and must find the courage to save the planet in spite of great adversity. It draws inspiration from Greek mythology and from Hollywood-produced science fiction movies, but features little originality. However, although critiquing the film based on this point would be perfectly valid, the main draw of this film is that it is a Rooster Teeth production.

It opens in the same way that any typical Hollywood film about immature teenagers would, presenting an irresponsible delinquent named Zach (Michael Jones) ignoring common sense and social etiquette. Officer Hagan, portrayed by Rooster Teeth co-creator Burnie Burns, is called to a party in order to arrest him following his drunken, violent behaviour. Hagan finds his daughter Mindy (Allie DeBerry) at the party and discovers that Zach is sexually attracted to Mindy. Meanwhile, troublemakers Herman (Colton Dunn) and Woody (Gavin Free) illegally set off fireworks, annoying both the U.S. Army and Officer Hagan. Hagan goes to investigate, only to discover two more drunk men acting stupidly. All three of the troublemakers have no respect for the law, leaving Officer Hagan in an unfortunate position. This may all seem fairly uninteresting on its own, but the fun lies in seeing three of Rooster Teeth’s most prominent personalities acting in major roles in a feature film. Many more of Rooster Teeth’s notable personalities appear throughout the film, including Matt Hullum and Gus Sorola. This is not a groundbreaking film aimed at dedicated sci-fi fans, nor does it hold much merit in any other regard. It is, however, an incredibly fun, hilarious and entertaining film featuring a group of entertainers who constantly do their best to entertain a global audience. People who are not a part of Rooster Teeth’s online community may not find this film entertaining, but fans of Rooster Teeth and its Achievement Hunter division will.

The characterisation is effective at drawing attention to teenage immaturity, drunken behaviour and other social issues, but the characters themselves are otherwise two dimensional. Zach does not goes through any character development. Woody’s development, if it can even be called that, is entirely superficial. Herman does go through actual character development, but even if the characters are not particularly well-rounded, the actors who play them make them fun to watch. The actors are all hilarious and entertaining in real-life, and they bring their high level of energy to this film. Officer Hagan is a bit less energetic than Burnie Burns is in Rooster Teeth’s online videos, but Zach’s character appears to have been written specifically with Michael Jones in mind.

There is a lot of humour featured throughout the film. Many of the jokes are immature, which is not surprising in the slightest, and none of them come across as intellectual. The wittiest part of the film is the song by the Barenaked Ladies that plays during the end credits. Even if the characters are stupid, however, it is easy to become invested in these four unlikely heroes and hope that they succeed in saving the planet. Attempts to evoke emotions during the climax of the film fall flat, but one of the things that the writers succeed at is writing social and political commentary that makes fun of the U.S. military and much more.

This film features some great special effects. It has been described as low budget by some, but even if this film does have a relatively low budget in comparison to some Hollywood films, the only disappointing element of the visuals is the 1980s CG-style rendering of the Antareans. Teenagers and other young people are depicted throughout the film as being obsessed with taking selfies, filming anything and everything and putting too much importance on Facebook and Twitter. These depictions are well-written comments on and simultaneously a celebration of this generation’s addiction to modern technology. Said references, unfortunately, may become a negative element in the future. If the online platforms Facebook and Twitter ever go away, however unlikely that seems now, this film will cease being relevant and will fail to age well. For people wanting to purchase the Blu-ray edition of Lazer Team, it should be mentioned that a few shots appear to be slightly lower in quality than the majority of the film.

The background music, composed by Jeff Williams, occasionally sounds much like the music featured in a typical Hollywood movie. There are some fitting pieces, but the vocal songs are all worth listening to. They help give this movie a Hollywood feel, which in this case is a good thing. Rooster Teeth fans will be familiar with Burnie Burns’ voice and Michael Jones’ voice, but Gavin Free spends the opening parts of the film speaking with what sounds like a Southern accent. It is an interesting change from his real accent, which we hear later on with the explanation that British accents apparently sound smarter to ‘stupid’ people. Of course, in this case, Woody’s helmet is the real cause for the increase in intelligence.

Included in this release are deleted scenes, bloopers, a “VFX breakdown”, “Making the Music of Lazer Team”, a video featuring concept art and a commentary track. It is easy to see why the deleted scenes are not present in the Director’s Cut; they are more inappropriate and less effective than the scenes present in the final film. Possibly the best part of the blooper reel is the brief appearance of the whole, original Funhaus crew. Many of these extras are worth watching even if only to see the time and effort that so many people put into the production of this film.

Unoriginal story or not, this is a film featuring familiar Rooster Teeth personalities in a feature film. It is likely to end up as a niche title enjoyed only by members of Rooster Teeth’s ever-growing online community, but that does not matter. What does matter is that Lazer Team is available for fans to enjoy. The conclusion of this film understandably disappointed some; setting up a potential sequel is not always a good idea. Fortunately, viewing this film mere days after the announcement that Lazer Team 2 is in pre-production prevents this from being a problem. If you like watching Burnie Burns, Michael Jones and Gavin Free in Rooster Teeth’s videos, you will almost definitely like Lazer Team. These people have been performing in front of cameras and microphones for years, and they demonstrate their talents throughout the film.
Capsule Computers review guidelines can be found here.

Author’s Note: The score for this review was entered incorrectly and has been updated by the author in order to present it with an accurate score.

Lazer Team is a hilarious and entertaining film featuring many of Rooster Teeth's most prominent personalities, but may disappoint anyone unfamiliar with Rooster Teeth.
7.5