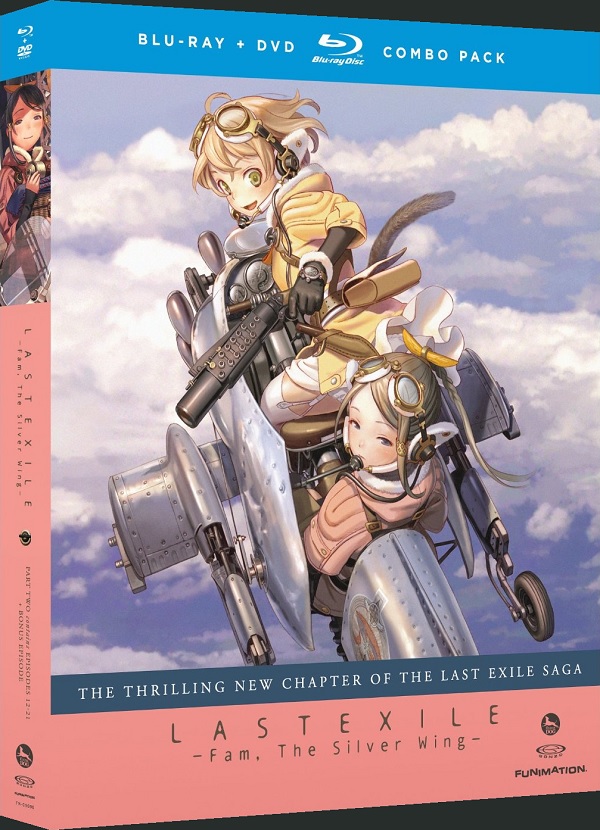 Overview
So far, Gonzo’s revival of the Last Exile series has been going well enough. Though poor pacing, an unfocused plot and some basic animation issues plagued Last Exile: Fam, The Silver Wing Part 1, the review of which can be found here, it managed to lay quite a bit of groundwork by building up a world full of various nations and introducing numerous characters to the story. Will all this build up pay off in Last Exile: Fam, The Silver Wing Part 2?

Story
Years after the people who fled the world after it went to hell and became almost entirely incapable of sustaining human life returned, the few people who stayed behind and suffered through the fall of the world were forced to leave their homelands. These refugees have gathered together under one nation known as the Ades Federation and after the events from Part 1, the Ades Federation has launched a worldwide war seeking to bring peace to the world by crushing everyone in their path and returning the land to its people.

When we last left Fam, Giselle and Millia the newly formed Turon forces were viciously attacked after Millia’s sister renounced her right of being a princess, firmly placing herself as an ally to the Ades Federation’s military leader Luscinia. With their meager force switching sides and their last allies damaged and fleeing the battle, the three have crash landed into Glacies territory. While they are helped by members of the Glacian military in return for assistance in the first half of the series, Glacies is the next target of the Ades Federation. 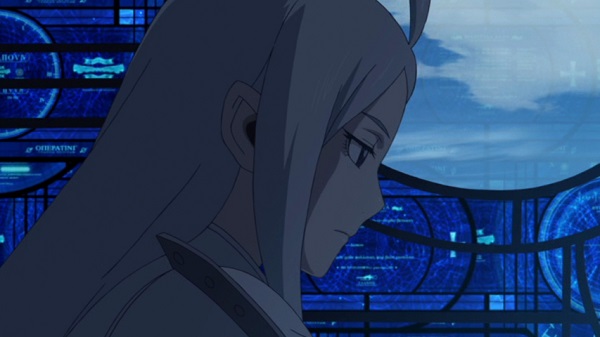 While the three are able to form a bond with Dian, one of the leaders of Glacies’ air fleets, and repair their vanship, it quickly becomes apparent that they are simply fleeing a nation at the brink of destruction. As they make their escape, they bear witness to the might of the Ades Federation as it not only obliterates the Glacian forces with new weapons capable of destroying smaller ships, but even summoning an Exile once more to annihilate the capable defenses of Glacies, leaving it nothing but a frozen wasteland of wreckage and corpses.

As Fam and her friends return home only to find that the Sky Pirate bases have also come under attack, Saya, the young head of the Ades Federation is told the truth behind Luscinia’s actions and it is declared that he is an outlaw and calls for all displaced nations to join the Ades Federation in forming a Joint Forces to not only take back their lands, but put a stop to Luscinia’s plans. 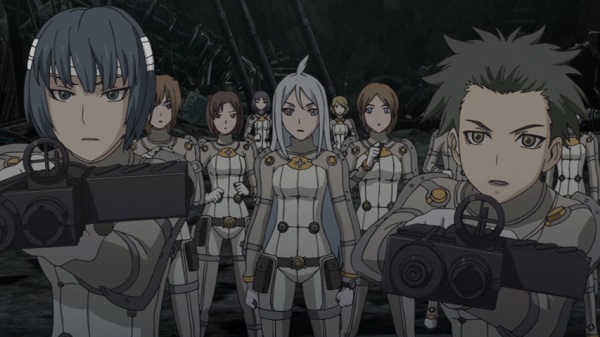 Last Exile: Fam, The Silver Wing Part 2 continues to suffer the main problem that existed in the first series and that is proper transitioning and actual pacing. An on almost episode to episode basis, minus a recap again, there are major shifts in the world as world powers are destroyed, raised, destroyed again, alliances are formed, betrayed, shifted and formed once again all while peace seems to only be a fingertip away as the series pushes to the final episodes with numerous plot twists and shifts in allegiances constantly changing the makeup of Fam’s world, even in the final episode.

One thing that is better handled this time around is the way the characters are handled. Despite the world spanning scale of the war, Fam remains a focus of the series as she is usually part of something, though often not the main player in the scene. Both Fam and Millia receive a fair bit of development throughout this second half as they come to grips with the constant war and try to come to terms with their future, even while Fam tries to remain a bright spot in a dark world, despite her naïve nature aggravating everyone around her. However, once again due to pacing, it is very obvious that entire segments of backstory and subplots, especially involving Fam and other characters, are completely forgotten or summarized for the sake of time, leaving some twists not only poorly supported but also full of holes. 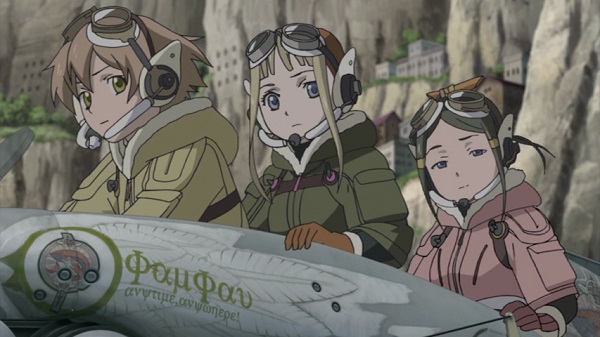 Last Exile: Fam, The Silver Wing Part 2 wraps the series up in a decent enough manner, though thanks to the low episode count of the series everything feels rushed and crammed together. Despite that, this second half manages to deliver a believable goal for Luscinia’s plans while the people of the world simply seek peace, even if it means going to war to do so.

Visuals
While the battles that were held in the first half of Fam, The Silver Wing were rather large at times, they seem like simple skirmishes compared to the battles that take place in this second half. The second half opens itself up with the Ades Federation’s fleets taking on the powerful defenses of the Glacies nation. Things become hectic very quickly as battleships and vanships are destroyed, artillery is carpet bombed and entire crews are destroyed in spectacular fashion. This battle and the many others that take place throughout this second half are all handled with CGI, from the designs of the ships, explosions and smoke and even the Exiles which eventually enter the fray and everything looks rather spectacular in motion. 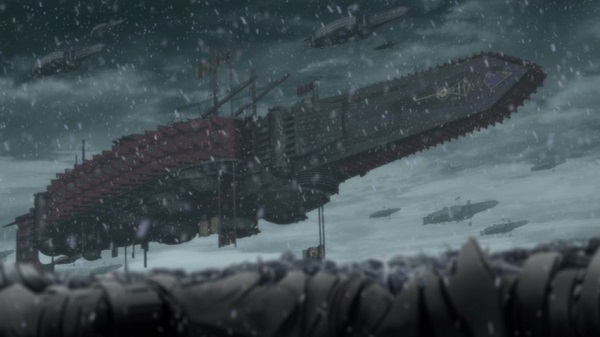 That being said, it is clear that the company faced some limitations when it came to animation as entire sequences are sometimes skipped, such as the coup de grâce of Glacies, Fam’s zipping around the battlefield on her agile vanship and more. It is also worth noting that the normal animation also takes a hit as the characters often suffer drops in animation quality.

Audio
As mentioned in the first half of the review, it is worth noting that many of the returning characters from the first season of Last Exile have been recast and unfortunately they continue to poorly match up with their previous voice actors. As for the rest of the cast however, they handle the characters nicely and considering all of the characters from the Glacies nation speak in Russian, it is nice to hear the Russian mixed in with the English dub. 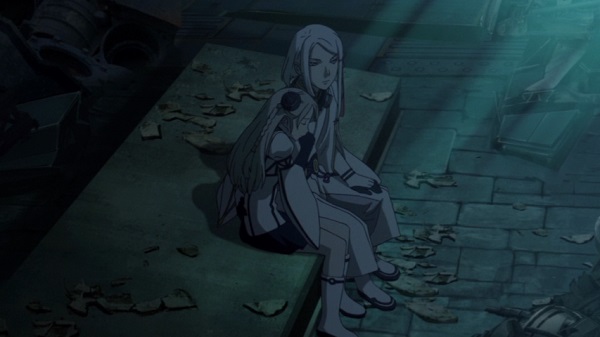 The soundtrack for the series continues to be quite impressive as not only are there numerous background songs that are matched up perfectly with specific scenes, a number of these songs have vocals to them. Whenever these insert songs are played they usually make the accompanying moment all the more important feeling. As for the opening and ending themes, they are the same as the first half and fit the series well, though it is worth noting that a few variations are used throughout the second half to bring special attention to the closing of that episode.

Extras
Last Exile: Fam, The Silver Wing Part 2 features numerous on-disc bonuses though a number of these are pretty much your standard inclusions. There are two textless versions of the opening songs, and four textless closing songs, promo videos from Japan, the US trailer and trailers for other FUNimation shows as well as a spin-off “Friday Night” collection of 8-13 which is short in length and played mostly for laughs. 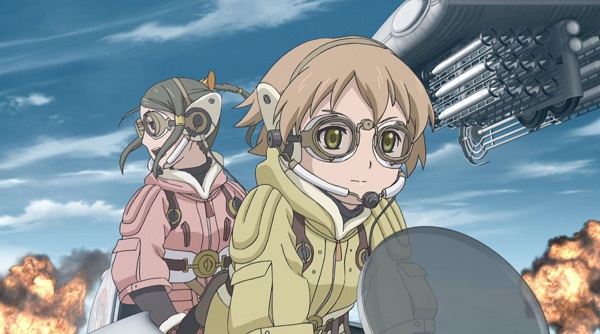 Alongside these extras there is also the second half of the Anime Expo 2011 interview with the staff at Gonzo and two commentary tracks. The first commentary track is for episode 17 and features Chris George who is the ADR Engineer for the series, Caitlin Glass, the voice of Magnolia, and Gwendolyn Lau, the voice of Vasant. The second commentary features the return of Leah Clarke and Jad Saxton as the voices of Giselle and Fam respectively and they are joined by Monica Rial who handles the voice of Sara Augusta, the Empress of the Ades Federation.

Overall
Last Exile: Fam, The Silver Wing built itself a world full of different cultures and people, brought them their knees, rose them up again as one and then struck them down once more only for a final goal to be achieved by the time the last credit sequence rolls. With stunning battle animations and a large scale plot, this second half manages to deliver on the groundwork of the first half.

While Last Exile: Fam, The Silver Wing could have been great if it had the time to properly develop everything that takes place, it falls short due to obvious limitations to the studio’s budget and massive pacing issues that force huge shifts in power with little to no development whatsoever.