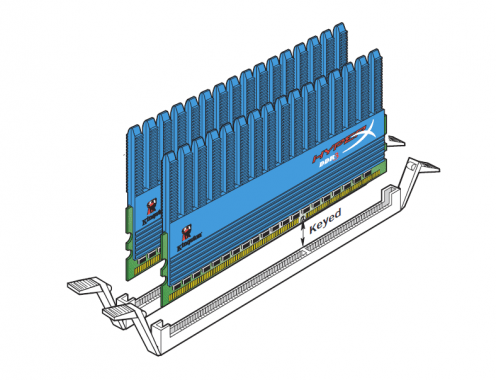 This is easily the most difficult thing to review that I have ever done in my entire career as a gaming media type. Computer RAM, every PC needs it and the more you have, generally speaking, the more you can do. So logically, you’d need as much RAM as possible to make sure your PC is always running the best that it can.

The RAM itself is a very nice looking piece of electronic componentry. Remember the old days where RAM was just a green stick of Silicone and all of the circuitry was exposed? Well gone are those days. Now we have this rather fetching looking shell not only protecting the RAM, but making it easier to insert and remove from your computers motherboard. When looking at the shell surrounding the RAM unit, you’ll netice it has a striking blue hue to it while being brandished by the familiar looking HyperX logos and other assorted Kingston branding.

Of course, installing RAM used to be pretty tedious. You’d have to make sure you’re not holding the RAM stick in a complicated position or you’d feel like you’re about to snap it. Thanks to the oversized protective casing surrounding the actual RAM unit, you never actually feel like you’re going to damage the components thus giving you an increase in confidence whilst upgrading your PC. The RAM also looks quite impressive in place on the motherboard and if you have an exposed machine, will probably look cool to anyone looking inside.

I’m assuming the packaging I received the RAM in is the retail packaging. This packaging is also covered in Kingston branding and through the clear plastic cover, you are able to see the magnificence of the RAM. My one issue with this case is that you either have to pop the RAM out by pressing in on the back, or you have to dislodge it by pushing against a piece of green silicone on one side of the packaging. I don’t like either of these methods because it feels like I might accidentally break a piece of the component, or drop it on the floor and damage it internally.

Now, to be completely honest, I feel that 16GB of RAM is completely overkill for most users at this point in time. The average gamer is probably not going to be running a Blu Ray film, rendering large images, running a VM Server farm and playing 2-3 copies of Battlefield 3 at the same time on the one computer. However, for the user that is, this package from Kingston is the one for you. Heck man, I have an 8GB machine and have never used all of that. And yes, I do run a VM farm and play games together. However, just because the package contains two 8GB sticks, it does not mean you need to have both installed to your computer. You could just run 8GB and keep the other as a spare. But hey, if you’ve got them both there, why not use them both?

As an average user myself, any speed increases by running these sticks of RAM was lost on me. Although, I’m pretty sure that my PC is bottlenecking somewhere along the line where RAM speed is irrelevant anyway. The only people that are going to be interested in this are the guys that care about every millisecond in processing time. Are you running a scaled model of the universes growth on your home machine? Then you probably have a specialised PC built for that. This RAM will give you those few extra milliseconds time, but for someone like me who just cares about how pretty his games look without it running like ass, I couldn’t tell you how significant a change in speed I had was.

After removing the RAM from the packaging I found that it included a quick installation guide and warranty information booklet. Now, this booklet was quite easy to unfold, but when I tried to return it to it’s original state, it ended up folding into a triangular prism. This was a nightmare trying to work out. However, I think I got it in the end, even if it now feels thicker.

What was most curious about this quick installation guide was that it didn’t appear to be talking about the RAM that was included in the packaging. It looked nothing like the included product and some of the instructions were a little odd. Don’t point at the RAM stick? Why not? Am I like Zeus and I can static it to death from a distance? I wouldn’t know, there was no symbols telling me why there. Here’s something else, did you know that this RAM can be fitted into laptops (it can’t)? Apparently it can according to the quick installation guide. Ignore the brown booklet, it is useless.

One thing that you’ll have to remember about having RAM is that it needs to be compatible with your motherboard. If you have an older PC, you might find that this RAM is incompatible. You may also need to fiddle with your BIOS settings if your previous RAM was of a different speed.

Overall, if you find yourself in need of additional volatile storage in your PC, the Kingston HyperX 16GB kit is a fairly good package that you’d probably want to have in your PC. It looks good, doesn’t really give you a reason to complain; and in two sticks as opposed to four, is sure to fit within your PC. While I personally don’t see a reason for having 16GB of RAM at the moment outside of a few specialised instances, future-proofing your machine is always a good idea.