Overview
Fitting blocks into holes may not sound exciting, but Ketzal’s Corridors has taken that classic concept and is ready to reinvigorate it entirely. In this puzzler, players must think fast as they control a guardian that resembles a finely sculpted Tetris block. This piece moves without mercy, and it’s the players job to position it accordingly into spaces within upcoming walls. I’m sure you’ve seen these mechanics before within titles such as Hole in the Wall and even Twister Mania for the Kinect, but this title has a lot more polish and love behind it’s clever scheme, along with a nice meaty challenge for those who have been craving something with a bit more substance from the eShop. The question is, do these blocks warrant a download, or does Ketzal’s Corridors hit a wall along the way? 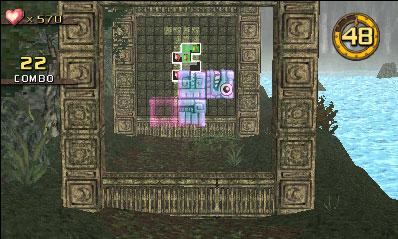 Gameplay
One really can’t begin to appreciate Ketzal’s Corridors without knowing how complex the game actually is. Yeah, the formula is familiar and simple, as players are simply just pressing a few buttons to flip a block into an appropriate position to pass through a wall. There is a lot more to it than that, however, as it takes a lot more than fitting a block through a hole to succeed. After a decent sized tutorial and rather forgettable story, players start out by taking control of a Guardian (the Tetris block) and must move it accordingly along a linear path until the end of a level. Along the way, a hefty amount of walls and tunnels stand guard to block your path, so of course you must then find a way through by acting as a guide. 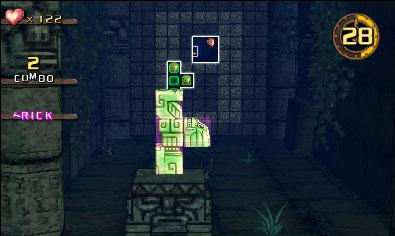 The control scheme is fairly easy to understand, as all that is required is to simply use the d-pad or control stick to maneuver your block, and use the face buttons to flip it into the correct direction before a wall or obstacle approaches. Players can also collect hearts located in certain holes for bonus points, and even speed up their Guardian by holding down one of the shoulder buttons in order to get through a stage faster. I wasn’t really sure that I would enjoy the main concept at first, but this title’s execution is very solid and each stage can be rather exciting to play, as a good number of “corridors” require heavy concentration and quick thinking in order to flip your block into the correct position due to the non-stop movement gimmickry within. 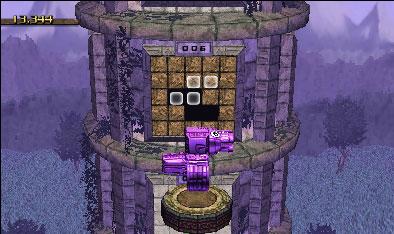 As you progress through, new guardians begin to get introduced, varying in size and shape. Things start out simple enough at first, with generic “L” and “T” blocks being used to proceed throughout the ruins. As the levels pass, the player will see several other oddball shapes to test their skill, acting as a refreshing form of challenge during the later portions of the game. Moving forward isn’t the only type of travel within Ketzal’s Corridors, though. Along your path to completion, you will find towers that need to be scaled by moving upward. The flip-match mechanics are still utilized, but your guardian is only required to take the correct shape of a silhouette before the timer runs out in order to move towards the top. 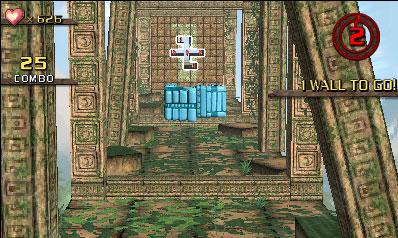 There are nearly 100 stages in all, with each usually taking only a short time to complete before moving on to the next area. As a whole though, this adds up to a lot of hours and a ton of content to unlock, making the replay value never-ending. Luckily, the game was also built with it’s platform in mind and is perfect for playing for long periods of time or for short bursts. Even when I wasn’t playing, I found myself spinning blocks in my head, making them take shape into everyday items, which is just a small testament of how addictive this little formula is. An added in multiplayer mode can only extend the infinite amount of time one can spend with Corridors as well, and offers some great local options for those with a friend nearby. The first multiplayer mode has two buds play the game with the same 3DS, with one player using the D-Pad for movement and the other control the flipping of the block with the face button layout. The other option is for local play, and lets players go at it in races throughout the “Ruin Run” or “Tower Trial” modes from the main game.

Visuals/Audio
Ketzal’s Corridors is one beautiful game that is about as polished as they come and acts as a perfect example of the 3DS’ abilities as a handheld. Environments are unique and varied, providing a nice amount of scenery, with the guardians themselves being finely detailed with little faces to give the game a bit of a quirky personality. The 3D is the headliner of the experience though, as that extra dimension gives the game a great deal of depth. Blocks can appear as if they are about to burst out of the screen, and going through a hole in the wall at full speed is something you have to see for yourself as no amount of words can do the effect proper justice. 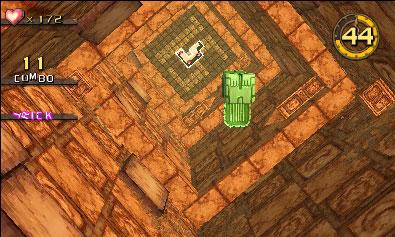 As far as sound goes, there is a pleasant batch of tunes in tow that all seem to capture the whole ancient ruin theme wonderfully, and make each level feel cozy and relaxing while your brain is hard at work. The minor sound effects also stand out, as everytime the player flips their guardian, it louds out a squeaky shriek. Yeah, this is another minor addition, but little touches such as this are plentiful within the game and go a long way to give the game added character and charm.

Overall
There is a lot that can be said about how addictive this little romp is, as the fast and frantic gameplay is both satisfying and enjoyable until the very last wall. With that said, Ketzal’s Corridors definitely won’t appeal to all out there, as the “Hole in the Wall” puzzle treatment is a gimmick that can scare away even the most hardcore fan of the genre. Fret not though, as this title is a visual beauty that offers a ton of content to boot, making it yet another essential eShop offering to come about this year. Now go, flip blocks, match blocks, and enjoy your new digital fix of greatness.