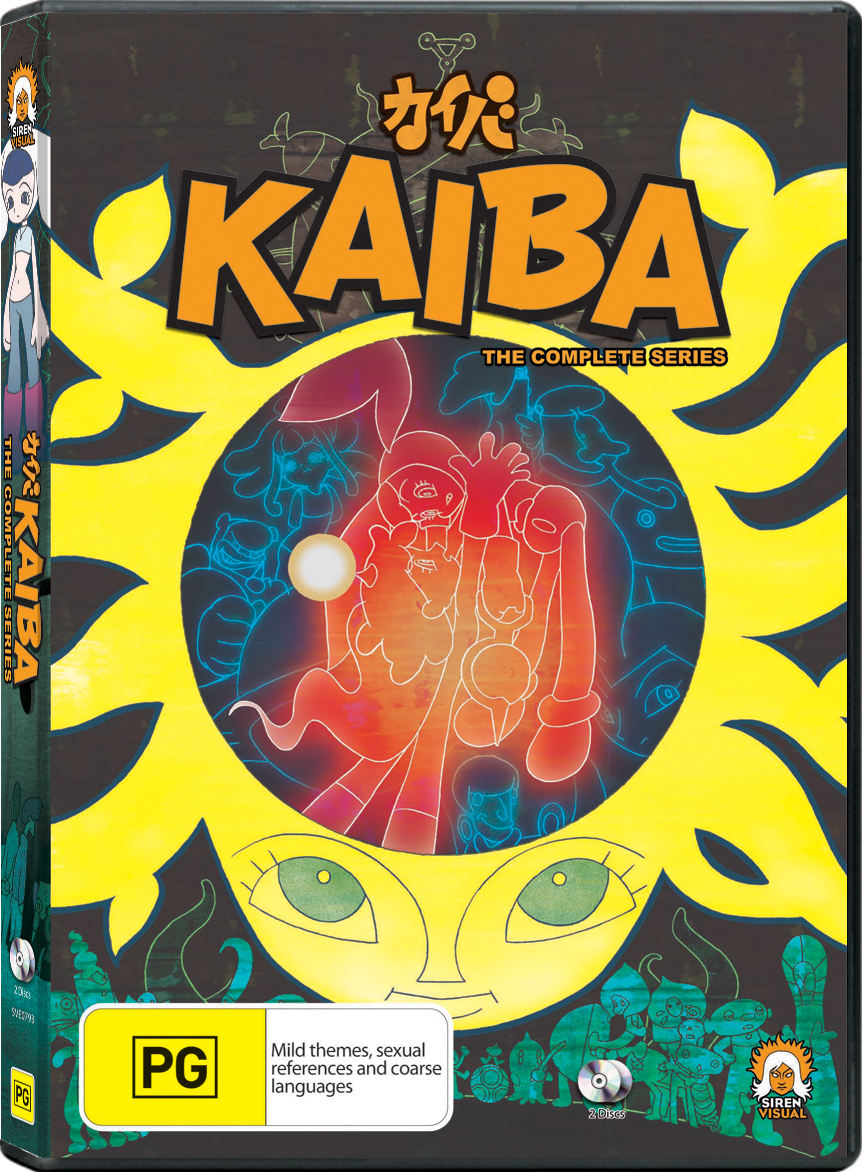 Overview:
Every once in a while, an anime series comes along that breaks down all you know about the possibilities and limitations of animation. Kaiba is one of these series. Kaiba harkens back the spirit of Osamu Tezuka’s work with astounding finesse and poignancy and all the while forming a bloodied raw heart that beats with the life and death of time and space it self. 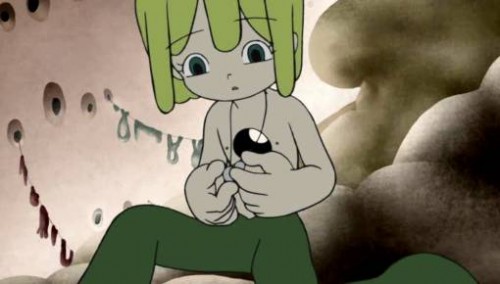 Story:
Kaiba is a journey. A beautiful, heart-breaking journey. It has been years since a story like this has been told in anime, god forbid even attempted. The simplest way to describe Kaiba is that it is a high-concept based story surrounding a future in which memories are traded like pokemon cards.

It is indeed a story that is better seen then told. Most of Kaiba’s story is told through actions over dialogue, a technique reminiscent of a somewhat similar-themed Disney animation, Wall-E. That’s not to say there is as little dialogue here as there is in Wall-E. There is definitely some talking. However the stark contrast in comparison with most anime series and in particular Siren Visual’s other “experimental” anime series The Tatami Galaxy which opted for incredibly overbearing dialogue to progress the narrative.

Thankfully Kaiba chooses the much more refined story-telling device. That being that, actions speak louder than words. A large portion of Kaiba uses dialogue sparingly, letting the brilliantly concieved animated world and characters guide the way as you follow the protagonist Warp, from body to body and across the vast universe to his final destination.

It needs to be noted that the most important them of this series is the power of memories. Each episodes continues to slowly pull back the curtain over the brutal reality of the hold our memories have over us. Whether it be the length we would go to in order to remember, the way memories shape who you are and who you will be, how your memories are the only thing that ties you to your past and above all the very nature of memories themselves.

Kaiba explores the nature of memories and the effect they have on us, in great depth and tells it in the most honest way possible. Much like Cowboy Bebop before it, Kaiba ponders not only the way memories hold us to our past but also the way it holds us together. It is clear that the big question that Kaiba is trying to tackle is “What are memories?” – a question that Kaiba passes on to you the viewer, provoking thought most wouldn’t know they were capable of. Thought of not only memories but of exisence itself. Are we just a body scarred with memories? Kaiba leaves us to ponder that. 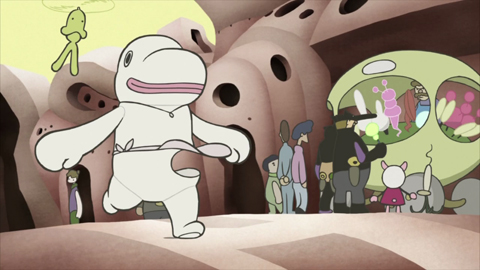 Characters:
While there is not a large amount of recurring characters here, the ones that do regularly appear are both memorable and relatable. Warp has no memories, he is the blank canvas a lot of us wish to be. So many of us wish to start from scratch, erase the past and start fresh. Unfortunately that desire is futile. Memories make us, to have none is to be the equivalent of a new born child. A being without experiences, understanding or comprehension of life and the world you inhabit.

It’s both a lonely and wonderful feeling, The wonder of discovery, yet the loneliness of not belonging. This is the struggles facing Warp our protagonist. Warp also happens to be the bloodied raw heart that I mentioned earlier on. Kaiba revolves around him naturally as do all the other characters and his journey is truly moving.

All in all, the character development on display here is simply amazing, with characters with no more than 10 minutes screen-time being allowed to grow more than most shows are capable of achieving in their entire run. That in itself is astonishing.

Artwork:
As mentioned previously, Kaiba owes a lot to the infamous God of Manga, Osamu Tezuka of Astro Boy fame. There is a clear influence of Tezuka on Kaiba that pays tribute to the late great Tezuka while also distancing itself through creative character designs and incredible sakuga animation (fluid animation) that is extremely rare to come by.

The animation is so fluid and never feels static. Much like the memories in Kaiba things are constantly moving, there is never still moment. There is so much life bleeding out from this series that despite its simplistic artstyle which would drive most away as being “kiddy”. This quality of animation simply does not come along every day and is an achievement in animation that should not go unnoticed. 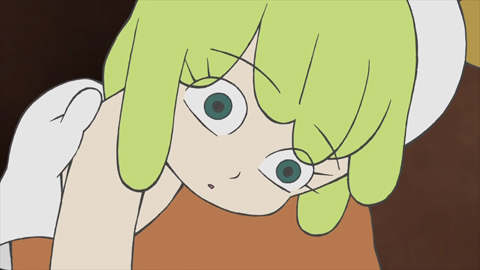 Audio:
Another tick on the checklist of points Kaiba succeeds on, I say. The audio portion of this series is perfect bedfellows with the goings on of the story and characters, making a perfect score for a perfect anime.

The opening theme is a lovely piece of music both standing alone and combined with Kaiba imagery. With pop-infused beats that promise a pleasant experience, while foreshadowing an underlying solemnity with it’s singers voice oozing ephemeral hope and impending destruction. Like the opening, the ending theme is an equally beautiful track, that makes a perfect closer for each and every episodes of Kaiba.

Voice acting is also well done, with each character being portrayed by their Japanese seiyuu with superb skill and providing what is without a doubt a clinic in voice acting. This is the benchmark that I believe most other series should strive for. Each actor plays their character with such personality and emotion, never once faltering.

Special Features:
You knew it was coming, the one thing that holds back this DVD collection. The one thing that holds it back from a perfect score. That one thing is the lack of any sort of extra’s what so ever. This is a consistent problem with Siren Visual releases, that really holds back their collection’s repeatedly. There are few series released from Siren that have special features and unfortunately they are way too far and few between. This time around we are given a few trailers and the usual slip cover that we have become accustomed to from Siren, which it self is quite nice. Other than that, this is the only thing that let down this release. 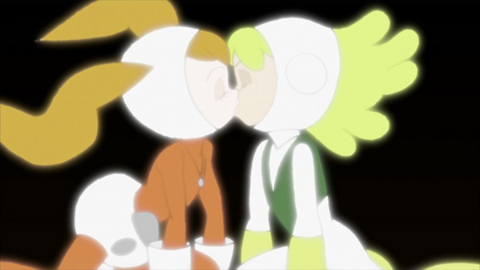 Verdict:
All-in-all, Kaiba is without a doubt one of the best releases Siren Visual have done, right up there with Welcome to the N.H.K. and Durarara!! if not possibly the best. It is absolutely perfect in every way, besides the noticeable lack of bonuses, leaving the collection with little but the show itself. It has been a long time since a series this good has come along that is why it pains me to not give this a perfect score. I urge everyone to go out and buy this series because if you love anime and have yet to watch this masterpiece, you are doing yourself a grave injustice.