Many years ago the Jagged Alliance series was one of the mainstay games in the turn-based strategy genre but much like many of the games that made up that genre, it went into hibernation for many years while the rights to the property were passed around. Now the series has returned once again in the form of Jagged Alliance: Rage! with this entry set to take place after the events of the previous two core entries and bring back the more popular mercenaries from those games. So now that Jagged Alliance: Rage! has been released, does this strategy game live up to its name?

The years have not been kind to the mercenaries that used to tear through the battlefields in past entries. Twenty years since their past adventures many of these quirky mercs have fallen on hard times, become addicted to alcohol, found themselves jaded with the world, or flat out left the world entirely to live as a recluse. Still, with the call going out to these few mercenaries with the potential of a huge payday on the horizon, players are given the option of selecting two mercenaries to bring with them into danger. Arriving on a dangerous island where a crazed ruler is seeking to create a mindless army at his beck and call, it is up to your small force to put an end to his machinations, whatever the cost. 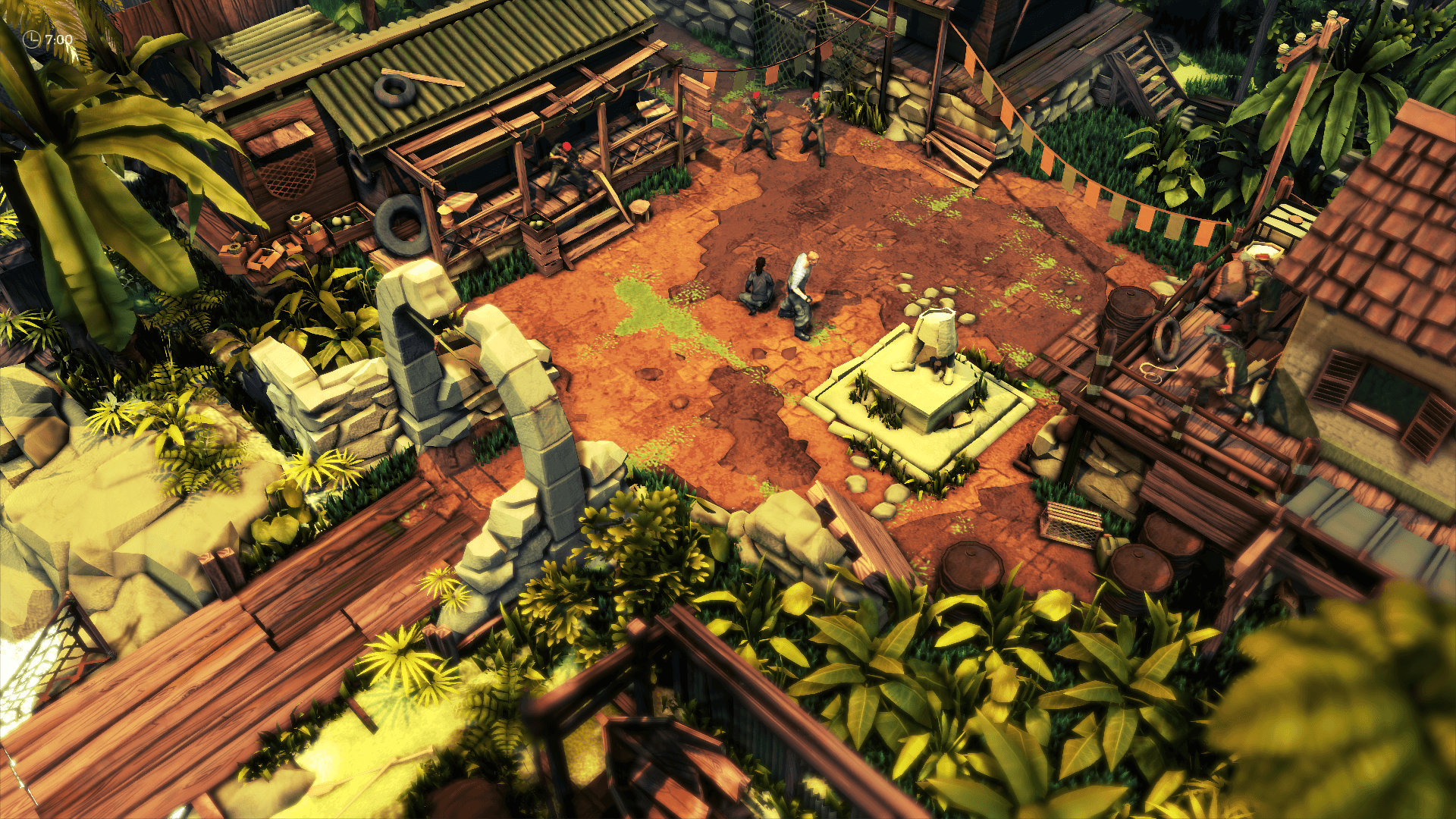 For the most part Jagged Alliance: Rage! is as by the books as they come when it comes to its storyline. Outside of an initial shock players won’t find too much surprising here and even the mercenaries that you choose to bring with you are as simplistic in nature as possible. While many fans of the series will remember these names, little has changed to their personalities outside of fitting their niches as standard as possible while also breaking down their spirit in some way and even when playing with different pairs of mercs you’ll find that they barely interact with one another outside of tiny quips here and there making for some very barebones character and story development.

Players will begin Jagged Alliance: Rage! by selecting only two mercenaries to bring with them into combat. Each of these mercs has a unique set of skills as well as weaknesses so it is worth looking through everyone before choosing, since there is no way to change later. Much like fans of the series and genre should know, Jagged Alliance: Rage! sees players being able to move, aim and shoot at enemies, sneak, stealth kill, and more with action points that will be restored the next time that character’s turn comes up. 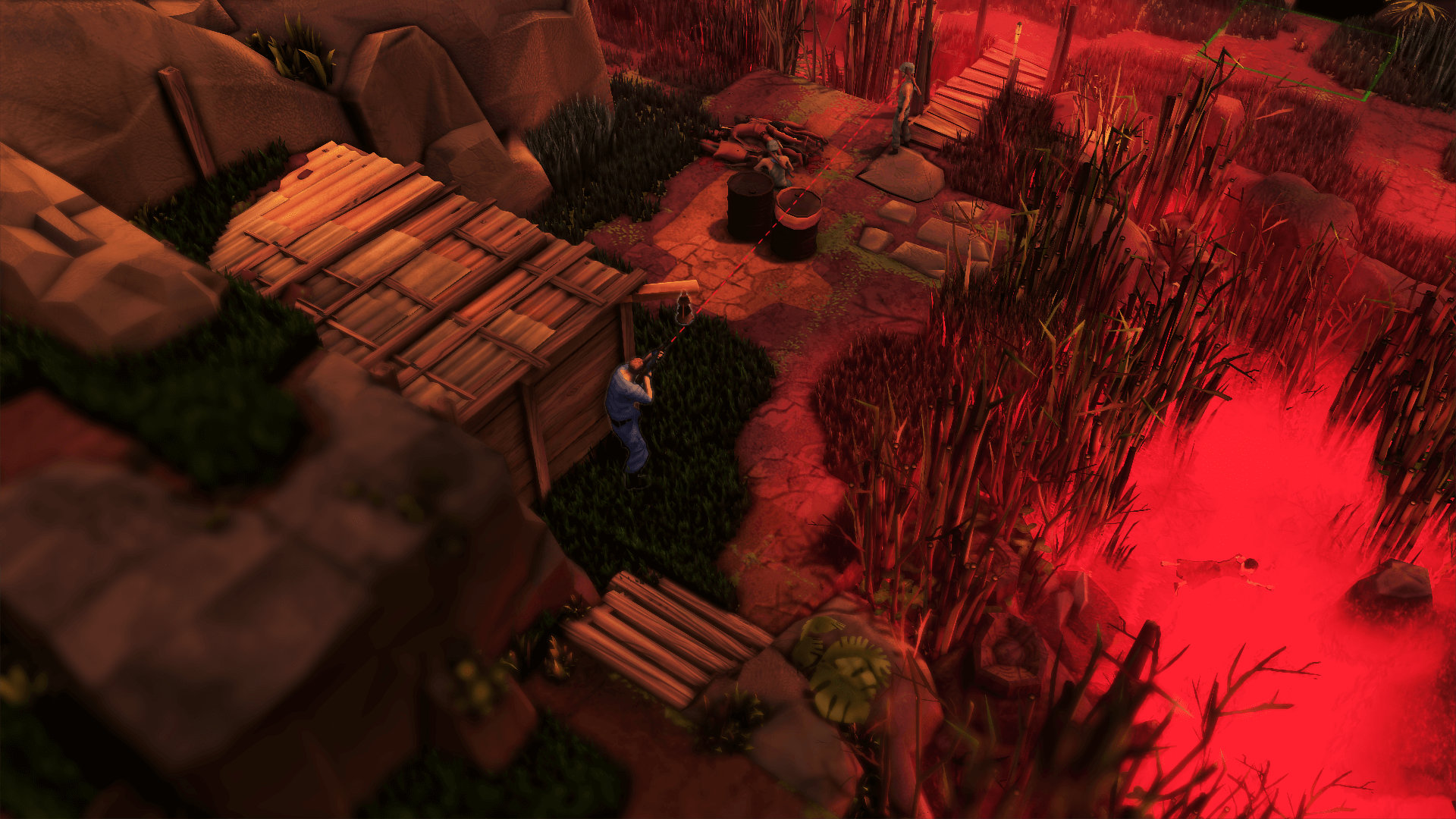 In fact, these aforementioned stealth mechanics make for perhaps one of the easier ways to play the game as foes who are caught by surprise can often be instantly killed if you play sneaky enough. Not only does this make it so players do not need to worry about risking a shot that may miss and may leave them wide open for retaliation but it also stops enemies from taking on one of their annoying AI tactics that we’ll go into later. Besides sneaking around players will find that the new “Rage” mechanic also adds a new little layer to the gameplay as every character gains adrenaline through dealing and receiving damage. This adrenaline then can be used to activate special rage abilities that are unique to each character and play heavily into that merc’s unique set of skills such as shooting multiple enemies at a time, or dealing armor ignoring damage, and more, often giving them a chance to turn things around in a fight or really put the finishing touches on a fight that’s nearly wrapped.

While players are given plenty of freedom to take on encounters either stealthily or guns blazing there are a number of issues that arise regardless of what you choose to do. Inconsistent enemy AI and stealth systems make for an incredibly draining experience, both for the player’s patience and their limited resources, at times since encounters can either play out in a matter of minutes or drag into long drawn out battles that only became an issue due to poor AI. Enemies randomly can locate bodies that have been hidden despite being on the other side of the map, or simply see straight through solid objects, alerting the entire area to your presence and then, depending on what the AI chooses to do, will either bum rush your mercs’ locations in an attempt to take you down with sheer number advantage or glitch out and wander around the map. In fact more than a few encounters saw the enemy AI actively moving away from my discovered units making it seem like we were hunting them down rather than trying to survive against a platoon of soldiers. 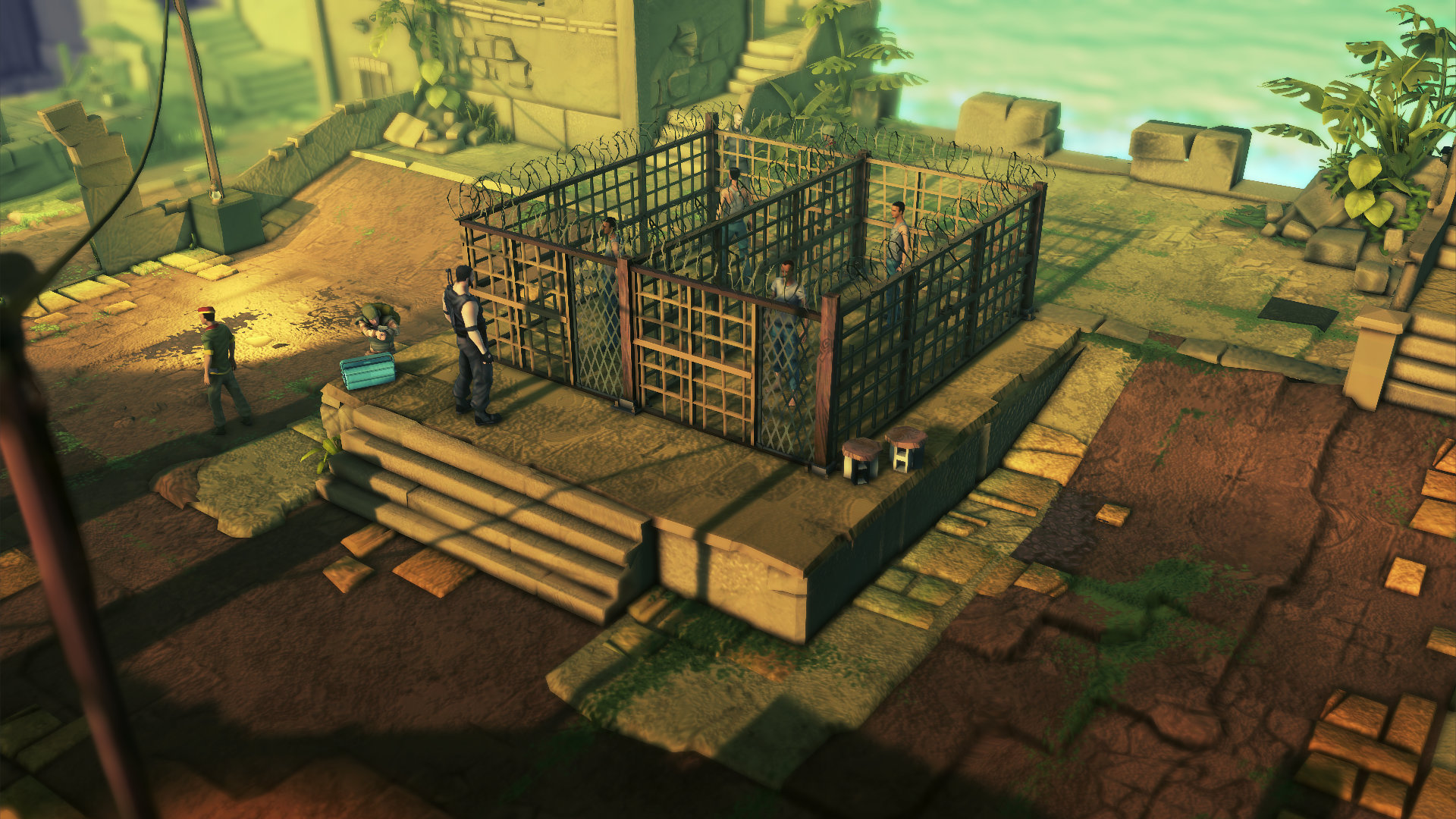 These drawn out battles wouldn’t put such a hamper on the experience if it weren’t for there being a number of survival elements mixed into the game as well. Each mercenary has limited inventory space and must manage their health by taking out pieces of shrapnel caught in a firefight or risk debuffs and health loss, water to stay hydrated, bandage themselves up, all while also trying to avoid being infected by using poor quality items. This issue can be made worse depending on who you choose to bring with you in your campaign as some mercs are either far more sickly than others or require alcohol to stay functional. Trying to keep a balance of these survival mechanics while also keeping your equipment looted from fallen enemies and found around battlefields can make for some rather interesting gameplay and resource management but the aforementioned poor AI and Jagged Alliance: Rage!’s tendency to drag things out, with even battle completion sometimes requiring turns of walking towards an area rather than ending when all enemies are defeated, makes every interesting gameplay element feel hamstrung by glitches or poor design choices.

Perhaps due to budget or an attempt at trying something a bit different, Cliffhanger Games has employed a bit of a comic art style to the characters and the world as a whole leading to designs that are hit and miss though almost always rather muddy looking. The mercenaries themselves are unique enough looking to tell them apart, though a couple are real ridiculous looking in certain situations and a few are flat out terrible looking while the enemy designs are as bland as they come making some of the longer battles really feel like a drag as you take down numerous faceless boring grunts. Thankfully the designs of the battlefields are changed up enough to keep things feeling fresh as you explore various parts of the island and find yourself fighting in the jungle, various buildings set up throughout the wilderness, inside encampments, and more. 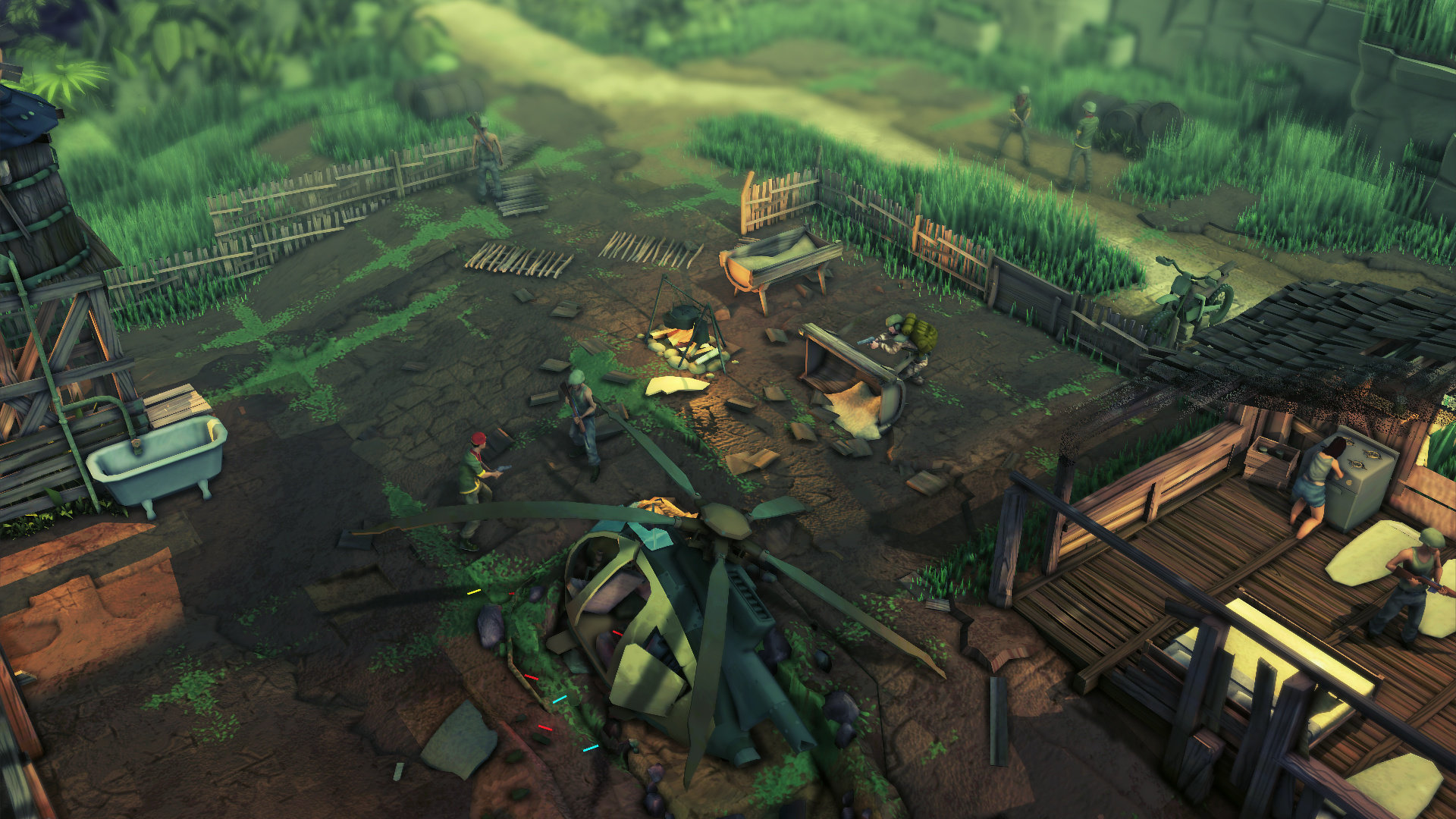 The soundtrack is predictable enough for a game such as this one while the sound effects are decently handled. The voice work is surprisingly well done for the mercenaries, making it all the more disappointing that they don’t interact with one another more other than making small quips here and there, while side characters are handled well enough.

Jagged Alliance: Rage! brings with it a number of often enjoyable mechanics that help breathe a bit of extra life into this turn based strategy game but an odd choice of art style and incredibly inconsistent AI and stealth mechanics drag down the experience into what ends up being a fairly middle-ground strategy game that may not live up to the past entries in the series but comes together decently for a budget title.

Jagged Alliance: Rage! delivers a fairly middling strategy experience where many of its better ideas and gameplay mechanics are hampered by poor AI and numerous design decisions that bring the game’s pace to a crawl.
5.5