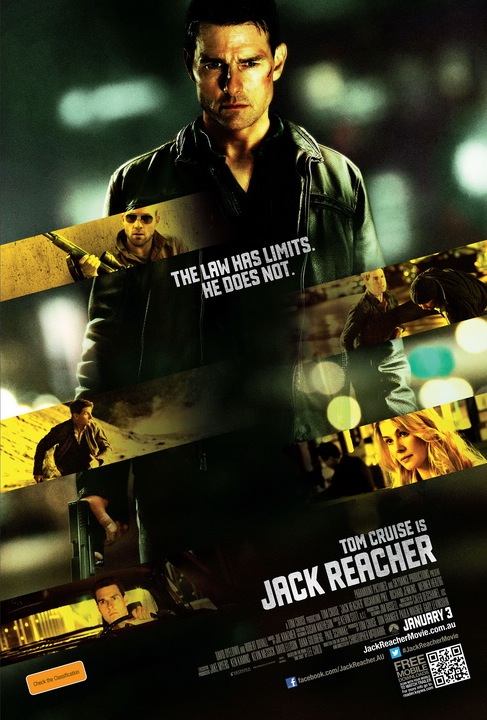 Jack Reacher is a film adaptation of the 9th novel in a series of 17 written by author Lee Child. The novel went by the title of “One Shot” and was originally released in 2005. The character was written as 6’5″ and 220-odd pounds, so when Tom Cruise was cast, many people voiced their trepidation. I wasn’t familiar with the novels, so I didn’t come into the screening with any preconceived notions or expectations. So, with all that said, is Jack Reacher a ‘one shot’ kill? Read on to find out.

James Barr, a former army sharpshooter, is in custody and is suspected of shooting and killing 5 people. Being pressured to sign papers pleading his guilt, Barr instead writes down three words: “Get Jack Reacher!”. Who is Jack Reacher… “Jack Reacher is a ghost.” A former military cop; a Major who was demoted to Captain, and then promoted to Major again. He’s been off the map for the last 2 years. He’s only found when he wants to be found…and so he appears.

James Barr falls into a coma after being brutally attacked by fellow convicts on the transport on the way to jail. The question on everyone’s mind is: ‘Why did Barr request Jack Reacher?’. And so the mystery begins, not only of the question, but of the murders Barr was accused of. Helen Rodin, the DA’s daughter, is representing Barr as his lawyer, and believes that he wanted Jack to find the truth; suggesting the possibility that he was innocent. 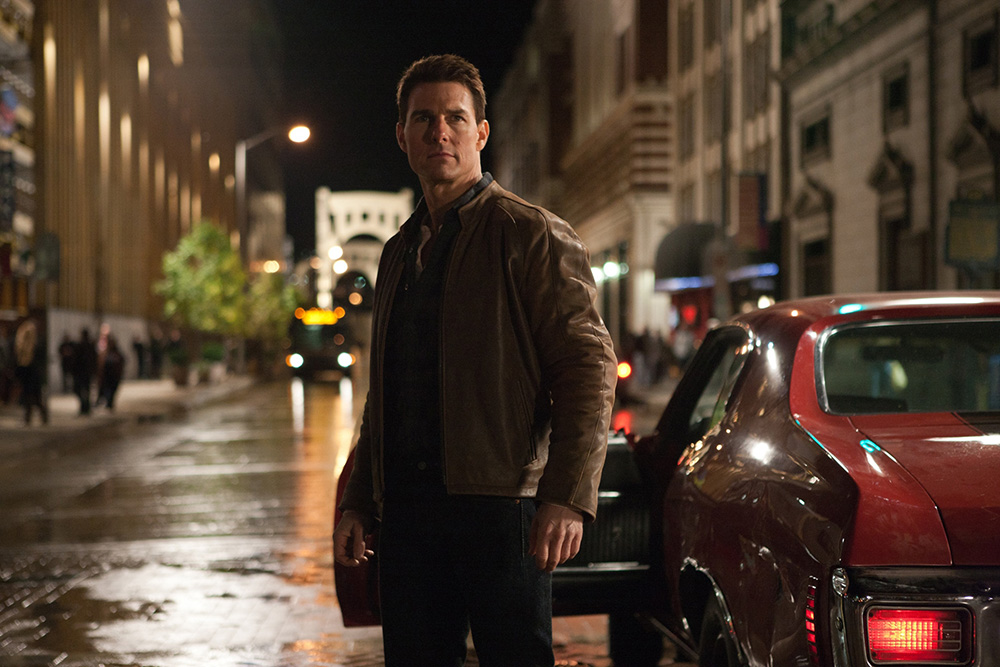 And so the set-up is established. From this point on, we see the development of the case investigation as Jack accepts, after much resistance, the informal job title of “lead investigator” from Ms. Rodin. He’s back in the game. After the exposition on Jack at the beginning of the film, and the notes on him being untraceable, his sudden introduction to the scene and film carried a lot of weight. It was a funny moment after establishing how hard he was to find, having him simply walk into the door of the hospital room.

You get the sense that this man means business, from the get-go. Having not read the novel series, seeing Jack Reacher’s introduction on-screen still carried a feeling of acquaintance with the character. As if this was in fact a sequel, and not the first film for the franchise. I don’t know if it’s because the script is based on the 9th book in the series, or because of the pure charisma of an actor the calibre of Tom Cruise. Had that exposition been excised, you would have believed this was a sequel. 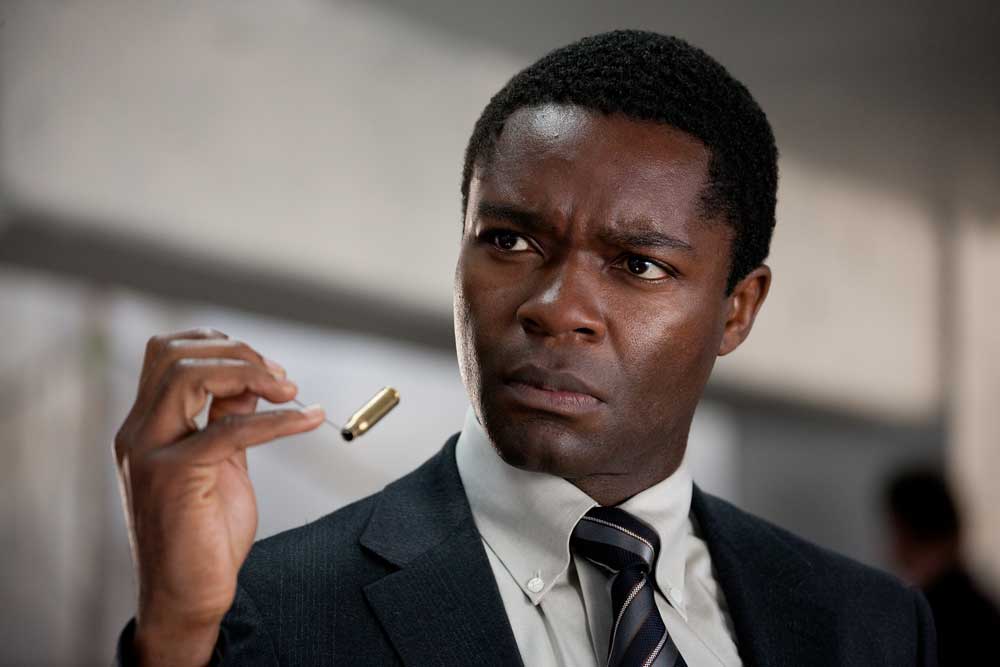 Tom Cruise is the star of the show; his toned down, realistic take on the role further cemented Reacher’s bad-ass image. The cast includes some great legends – Werner Herzog as “The Zec” (The Prisoner) and Robert Duvall as Martin Cash, a gun-range owner. The Zec could have been a good buy, and I’d STILL be afraid of Herzog. His voice and accent is so creepy, so menacing, that he just can’t help but be typecast for it. And that’s not a bad thing. Also, Aussie newcomer Jai Courtney makes a good accounting of himself as Charlie, an amazing sharpshooter himself and associate of The Zec’s.

Rosamund Pike is a solid actress, but I felt she displayed this wide-eyed expression on her face far too often in the film. It was like she was constantly stuck in a state of fear and was exaggerative. I would have liked to see a lot more development on the side of the villains. I understand the fact that, because they are tied in with the mystery, they themselves are to be kept as somewhat mysterious figures. But after certain facts were established, it would have been nice to get a little more backstory on them. Probably the biggest fault of the film, which, quite frankly, there are few of. 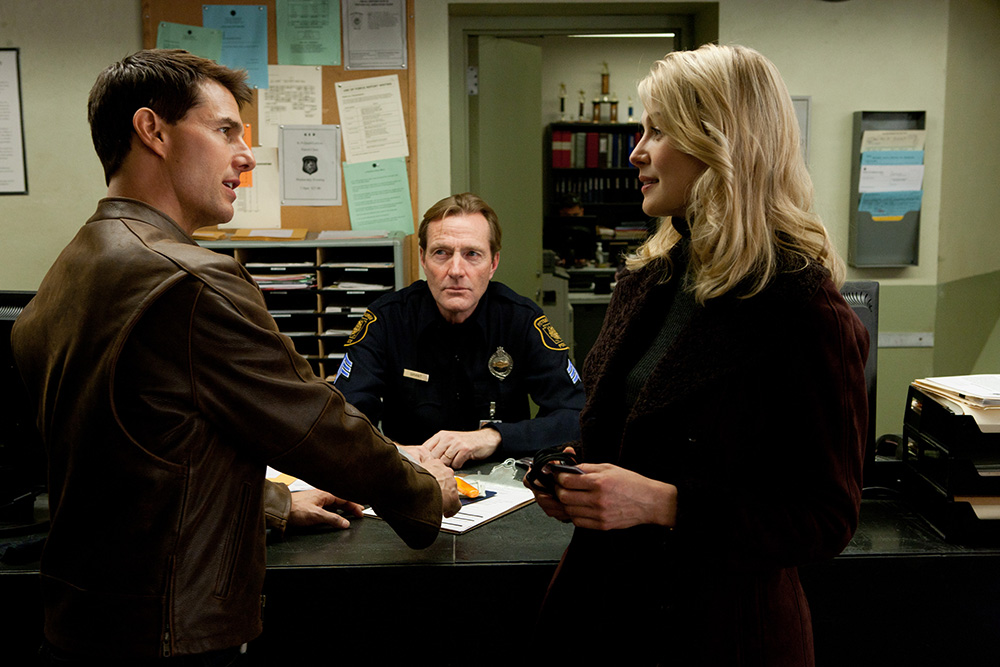 The action in Jack Reacher is all encompassing – you’ve got your hand-to-hand combat, your epic car chase and a fantastic shootout. All your action-needs are covered. Jack Reacher himself is an amazing detective (unofficially) combining his knowledge from the army, keen observational skills and logic to make some great and accurate deductions that leave the viewer in a “oh yeah, of course! Wow, that’s genius!” moment. The script does a great job of providing these moments in an intelligent way. There are also some funny lines given by Reacher, which brings some welcome levity to the story.

I felt that the film was the perfect length, featuring very little fluff. The pace is very well balanced, leaving no restless moments for the viewer. The conclusion was satisfying, although I can’t help but to keep coming back to the lack of development for the antagonists of the story. Because of this, there was less impact with the ending. It’s unfortunate, because otherwise I would have classed Jack Reacher a near perfect thriller/mystery/action film, especially for this generation.

Jack Reacher is very gritty, especially when it comes to the action-heavy sequences. Christopher McQuarrie does a great job of keeping the camera in tight, as close to Jack’s perspective as he can without compromising the shot. Now, I’m not talking about constant extreme-closeups, or 1st-person perspective shots. The best examples are the static camera placed on the hood of the cars in the car chase, and the low-angles and eye-line shots when Jack is getting attacked with a baseball bat in a bath tub. 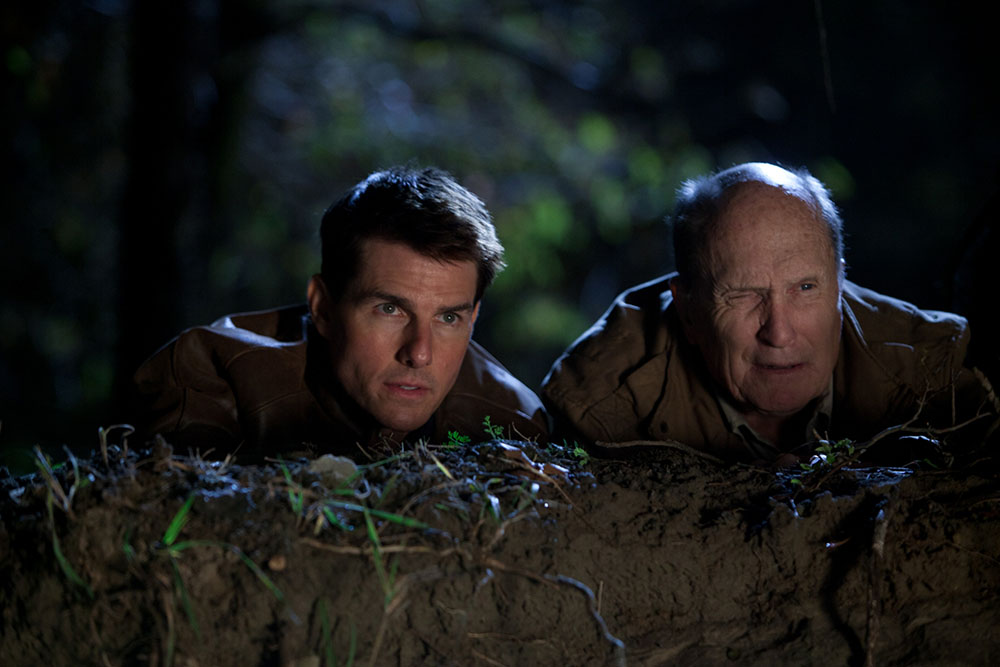 Basically, McQuarrie uses shots that ensure the action is clear and reads perfectly to the viewer. While those angles were appropriate for those specific scenes, there’s also a fight sequence earlier in the film where Reacher fights 5 guys outside a bar. The camera closes in on the expression of the bad guy getting whooped and then back out to wide shots so that you can get a sense for the space and positioning of the enemies, as well as the scale of the fight.

I was obviously impressed with the direction, and the same can be said with the audio. Gunshots were loud and heavy. Car noises, such as the engine rumbling and gears shifting, were clear, and what was also nice is that during most of that car chase, there was no music or score behind it. All that could be heard were the cars; the sense of the thrill of driving at such high speeds really benefited from that focused sound design. 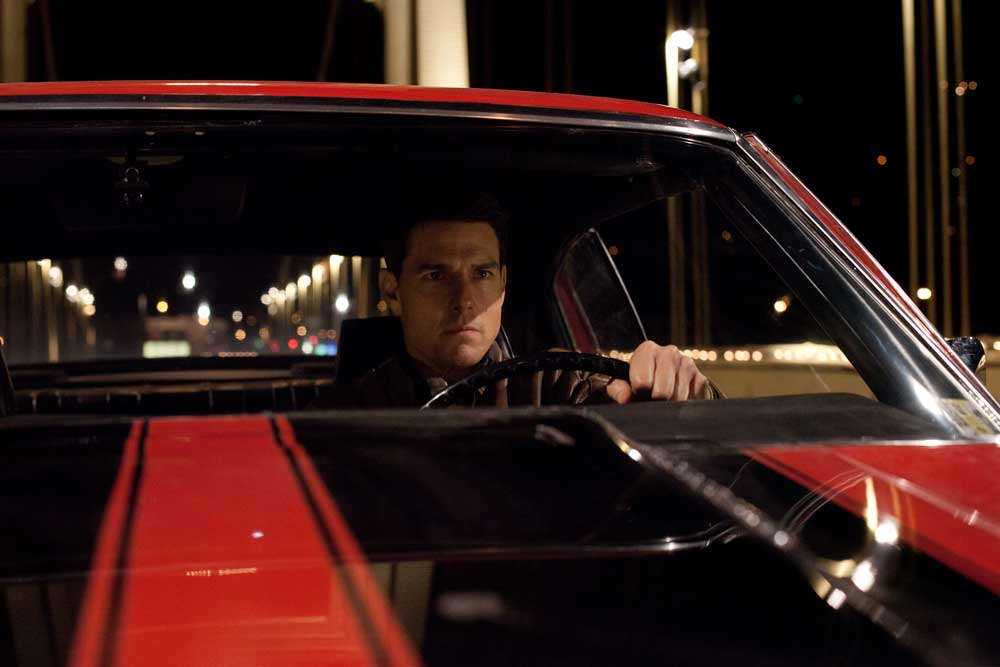 The score was created by Joe Kraemer (Way of the Gun), and uses strings and brass instrumentation heavily. It immediately sounded familiar to me as I was stunned by how certain tracks resembled Norman Corbeil’s Heavy Rain soundtrack, which I love. It seemed the same instrumentation was used, and the composition even reflected a similar pacing. The motif of deep brass notes continuously rising in single, two-note or three-note configurations was very evocative of Heavy Rain. Coincidentally, both stories have a large focus on investigation.

There was also, what I like to call, the “Lost” violin, which is played in tremolo, sul ponticello (near the bridge). In layman’s terms, it’s that quick, scratchy, eerie sound that is heard throughout the Lost OSTs. I loved these tones and techniques, because I am a fan of those two IPs. If they were true inspirations to Kraemer, no one knows. But they seem to create the perfect air of suspense and drama for the film. 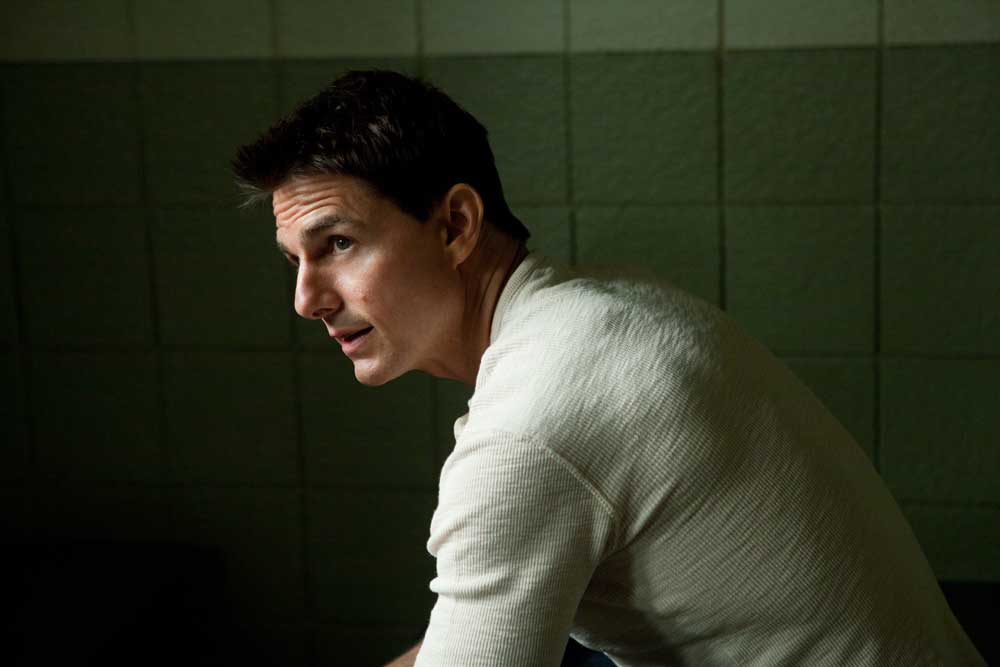 I really enjoyed Jack Reacher. It’s been quite a while since I’ve seen a classic action/mystery/thriller style flick (the last was probably Shutter Island), and this was definitely a throwback I appreciated. The music is great, the directing/editing is not overdone, the action scenes are well choreographed and shot, the script is clever and the performances on a whole are very good.

Tom Cruise’s height and size difference to the original character of the novels is not even worth a thought; he absolutely kills (literally) as Jack Reacher. I recommend Jack Reacher, and with all the source material that’s available, I look forward to seeing future entries in what will hopefully become a successful film franchise.