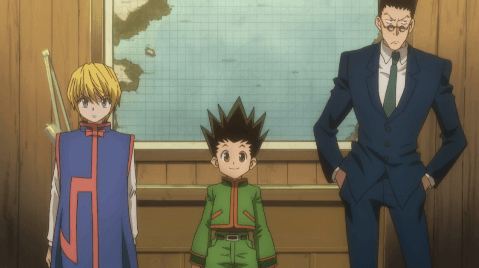 There has been a lot of hype building up to the first episode of the Hunter x Hunter reboot. If you had been following the hype-train you’d have caught that while this adaptation will be much closer to the manga than the previous series, it will have some pivotal differences. One of which is the relocation of Gon’s back-story with Kite. For those who watched this episode and were disappointed that Kite did not make an appearance. It appears that Madhouse are chucking a One Piece and showing the protagonist’s back story later on, to lessen the gap between his first appearance and his reappearance.

But enough of that, how did the episode stack up? Well, we begin with Gon at Whale Island capturing the Lord of the Lake, whom might I add is given a nice blue recolour here. Things happen at a much brisk pace from there. Gon is given the blessing of his dear Aunt Mito to take the Hunter Exam and from there we move straight to the ship to the exam. It al happens at a much faster pace than the previous anime series, but I believe it is for the better. A lot of the older series’ fat has been cut here, making a much more cohesive story. 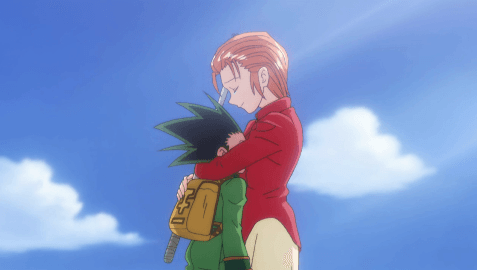 What I liked about the bit’s on Whale Island was the way they portayed Gon’s relationship to Aunt Mito. I was surprised that their connection was so well established despite the lack of the back story with Kite that heavily featured Mito. I’ve got to say, the pinky promise, followed by the thumb-kiss was adorable and really solidfied that mother and son dynamic they have. However, I’m still not 100% sold on Mito’s voice actress, as she sounded a little older than I’d have picked for her character. But she conveyed her love for Gon perfectly, and that is what counts most.

Once the story progressed to the boat to the Hunter Exam’s location, things heated up. Not only did we get the introduction of Kurapika and Leorio, but we had the expansion of a manga character who is now given more to do than he did in the manga. Of course of am speaking about Katsuo. In the manga, Katsuo simply falls overboard and is saved by Gon, Kurapika and Leorio. However,, in a great move by Madhouse, they have expanded upon his character, ultimately giving the moment of his falling more urgency and heart than even the original manga had. Which really I consider a change for the better.

Kurapika and Leorio are introduced as they both bicker and argue over pety things, Leorio being angry at being spoken to with disrespect (being called simply “Leorio” instead of “Leorio-san”) and Kurapika angry that Leorio mocked his clan. Leorio challenges Kurapika to step outside to settle the dispute. The ship’s Captain attempts to stop them, but Gon provides some word’s of wisdom to hush him. “If you wan’t to understand someone, make an effort to know why they are angry.” 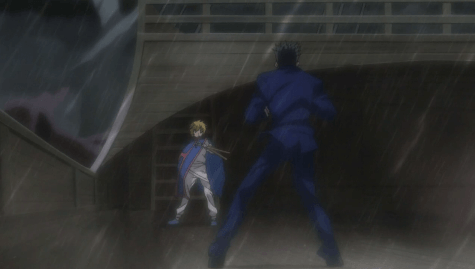 There were many great character moment on display here, which is really what is the heart of Hunter x Hunter. I am simply bursting at the seams as I await the slow-burning over-arching theme of Gon’s loss of innocence. This episode begins with Gon, a 12 year old boy, the face of innocence by all definitions. For those who follow the manga, you’ll know that one of the greatest experiences of Hunter x Hunter is watching as Gon loses his innocence bit by bit as he grows to learn of the true nature of the world. That it is a dark and unforgiving place, that despite being civilised is still at it’s core about survival. It’s hunt or be hunted, it is the way of the world and Gon learns that truth the hard way. We see him at his most pure here, I guarantee that by the time the Yorknew City arc comes around, he won’t be the same innocent Gon we see here. Not at all.

As for the music and animation, well let’s start with the music. Put simply, it fit perfectly with the series. I loved the OP theme, “Departure”, it was both exciting and exactly what I expected and hoped for. The ED theme, “Just Awake” is the perfect opposite side of the coin to “Departure”, while “Departure” is very lively and hopeful, “Just Awake” is heavy, dark and brutal, giving a perfect sign of things to come from the series. 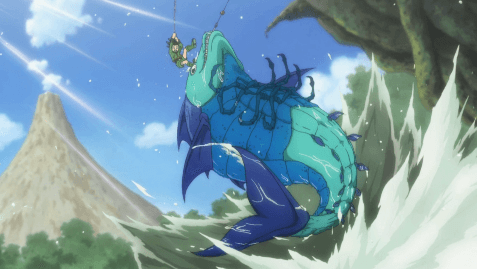 The animation was top notch, and definitely retained the Madhouse style, while capturing the spirit of the manga perfectly. There was a few highlight bits of animation, such as the wave that crashes between Leorio and Kurapika during their stand-off and Gon scaling the ship’s mast. I can’t wait for the action scenes to start, that is when the series is really going to kick it into gear. But for now we play the waiting game.

What else can I say? This episode left me satisfied for things to come as well as pleased with the introduction the episode gives the series. We got great introductions for 3 of the 4 main characters and the pacing was well done. It was over all a solid first episode for a series that has nothing but bright futures ahead of it, no matter how dark thing’s are going to get.