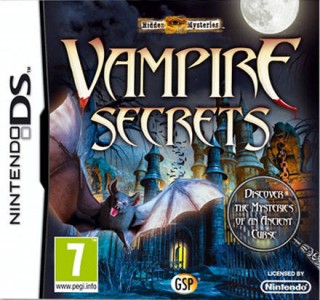 Seeking respite from the hustle and bustle of work, Claire Donnelly decides she is long overdue a visit to her Aunt’s, hoping her holiday will give her a break from the frequent migraines and visions she’s been having. But arriving at her Aunt Rosie’s, she finds her to be missing and a little exploring reveals she’s left town due to supernatural goings-on, only to return once things have been resolved. In a journey that takes Claire across Savannah, you must identify the evil forces living amongst the citizens by following your visions. Sadly, whoever was put in charge of titling appears to have failed to grasp the idea of a ‘secret’, as they have taken away much of the mystery with the mention of a ‘vampire’. Still, the plot is compelling enough and flows from scene to scene relatively fluidly. 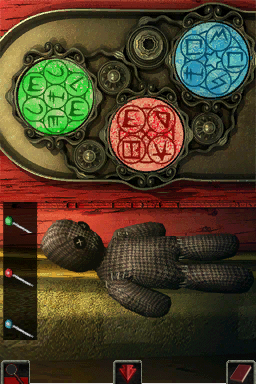 The hidden object game is a genre yet to be perfected on Nintendo DS, despite its obvious potential given the dual screens and touch screen interface. Although this still remains the case after playing Hidden Mysteries: Vampire Secrets, it is actually a good example of the genre, showing that the limitations of the DS don’t mean a shoddy game with a grainy interface.

You see, Hidden Mysteries: Vampire Secrets seems to learn from the mistakes of others before it. Too many hidden object fall by the wayside due to being overambitious with the visuals, attempting some sort of 3D effect, and by trying to create an eerie, tense atmosphere with very dark surroundings. Generally, all this achieves is creating pixelated objects where the resolution can’t cope or, in the case of lighting, making the screen so dark that players can’t see what they’re doing or any of the objects, causing the playing experience to degrade into nothing more than you tapping randomly on the screen until all the objects have been found. 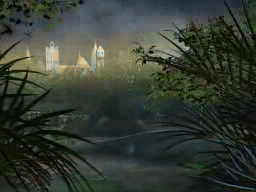 Crucially, Hidden Mysteries: Vampire Secrets avoids all these problems by opting for a hand-drawn art style, keeping the in-game animation to a minimum by instead opting for static screen after static screen as you move around the world. The hidden object scenes are well-lit, as are the additional puzzles, mini-games and movement sections, meaning you can clearly identify the required objects among the arrangements of items. But, that’s not to say they aren’t well hidden, as many are blended in with the environment in clever ways where you will scroll right past them a few times before noticing them and until you finally find them (or use a hint) and wonder how you managed to miss them. It’s worth mentioning, though, that those with an original DS may struggle due to its slightly darker display, although everyone with a DS Lite upwards should be fine.

Control is handled almost entirely by the touch screen, with the exception of the L/R buttons which can be used to bring up prompt markers showing what can be interacted with and where to click to move into the next area. The touch screen control works fine, with the only major problem arising during play being that scrolling around the hidden objects scenes can be a little cumbersome with the stylus. Fortunately, this is easily solved by the option of scrolling around the screen using the D-pad, which is much more practical. 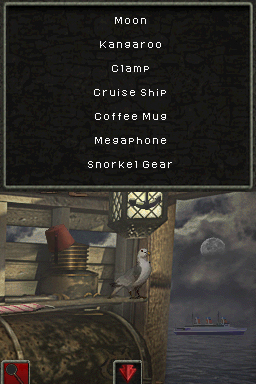 Important items are automatically moved to your inventory, just like the books which can actually be read to discover useful information and clues for your journey, even if the font is a bit small and hard to read. There are also elements that suggest the developers have had some fun designing the hidden object scenes, such as a foot-print on the underside of a shelf at head-height. God knows why there’s a cooked chicken in a drawer in the Church (see what I did there?).

Each chapter flows well, requiring some logic but remaining comfortably linear and simple to avoid anyone getting lost and having no idea what to do next. Hidden object scenes and puzzles allow you to acquire items which are then used on the environment to progress, with you often backtracking to places because initially you had nothing of use, but after picking up a certain item you can now engage with it. The completion of one thing opens up something that links to the next. 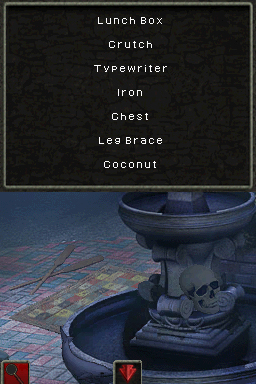 There are even measures in place to stop people getting completely stuck, as each of the puzzles offers the option of skipping it altogether once the skip icon is fully charged, whereas hidden object searches hints come in the form of pointing out an item on the list, for example if you are down to the last one but just can’t find it. This recharges over time so if you are struggling to search and taking ages, the hint icon gradually fills up to help you. The 10 chapters in total each carry an impressive albeit brief video sequence at the start. These rendered cut scenes clearly stretch the hardware to the limit, though, as it can be prone to freezing and blacking out when exerting itself in this way. Luckily, the handy auto-save function which saves after the completion of every puzzle prevents any significant loss of your progress. The voice-acting that accompanies the clips isn’t so great, although most of the dialogue is text-based for you to read yourself anyway.

Hidden Mysteries: Vampire Secrets sits as one of the better hidden object/point ‘n’ click games on Nintendo DS. It isn’t perfect, but by doing the basics right with a clear, bright layout and an adequately engaging plot, it doesn’t make a lot of the same mistakes which others have before it. The hidden object sections end up slowing down the gameplay due to such apt point ‘n’ click sections, but if it’s your style of game, it could be worth a look, especially if you consider it’s going at a reduced price point.