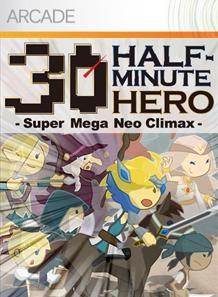 After releasing on the PSP in 2009, Half-Minute Hero made quite a name for itself for it’s unique style of gameplay that took the traditional grind and battle JRPG formula and shrunk it down in a 30 second, bite sized format. Thankfully, Half-Minute Hero is back and better than ever with Half-Minute Hero: Super Mega Neo Climax on the Xbox Live Arcade. Along with an online leaderboard and multi-player, this version also includes a shiny new coat of paint on the once 8-bit graphics so fans can enjoy the game in beautiful HD. Does this fast-paced RPG still still keep everything solid or does it fall apart quicker than an Evil Lord’s scheme? Here is my review for Half-Minute Hero: Super Mega Neo Climax for the Xbox Live Arcade. 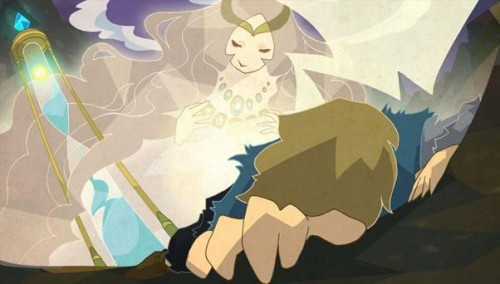 Story
Whether it be Dragon Warrior, Final Fantasy, or any 8-bit JRPG, the story usually consists of the player leveling up a character throughout a 20-40 hour experience in order to take down an “ultimate evil” at the end. Half-Minute Hero utilizes this same formula, but shrinks it down into a quick, 30-second quest. With the help of a money-hungry Time Goddess, the main plot in this title consists of helping villagers with side-quests, leveling up, and then quickly taking out a Evil Lord at the end of a mission before the timer hits zero.

With a simplistic story, you would think that Half-Minute Hero: Super Mega Neo Climax would come off as a bland parody of the RPGs we all know and love. Thankfully, this is not the case as each world is full of humorous NPCs that truly make each short adventure memorable and fulfilling. The Time Goddess enjoys mocking the genre and the player with her quick and witty humor, and each village is inhabited by your typical RPG NPCs, usually in a panic about the “big bad” that is about to doom their little world.

Bosses also add in humor, with the likes of an enemy crab, a giant bat, and several other larger than life antagonists that all share the same goal of delivering a spell of destruction onto the world. The RPG genre has made itself a target of jokes for years now due to the many similar plotlines and generic characters, and Half-Minute Hero somehow pays tribute and roasts all of your beloved favorites in record time. 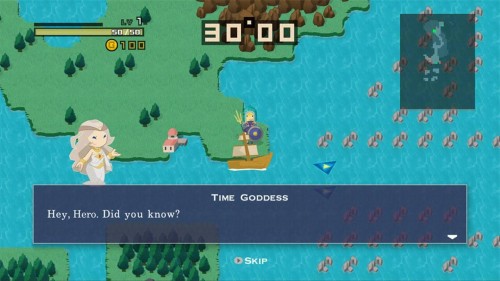 Gameplay
Half-Minute Hero starts the player out in a standard overworld, with the Time Goddess giving instruction of what evil entity to defeat beforehand. Now this game is exactly what you would expect from an RPG, as the player must battle enemies, level-grind, and upgrade their weaponry, but due to the thirty second time-frame, you must plan out a strategy to succeed.

Random battles are a frequent occurrence, but they are also the most important element into our Hero’s success. Each battle goes by so quickly it is almost as if the game plays itself, as the hero runs through with his weapon in hand, quickly dishing out damage and taking out foes along the way. A dash command can allow these battles to go even faster, but at the cost of HP. Each enemy that is defeated drops money, and with that cash the player can feed the very greedy Time Goddess to reset time, which can be done by praying upon a statue that can be found in certain villages across each overworld. After doing so, the 30 seconds restarts and allows for more preparation to be done in order to take out the final boss.

While battles involve very little work from the player, preparation is needed to actually win against a foe, and this is where the core strategy is found in the game. With money collected from battle, the player can visit different villages and buy new armor and weaponry. Things like shoes, swords, staffs, hammers, and other tools are used to gain an upper edge in battle, and due to the time pinch, the quicker you defeat a group of enemies, the less time you will have spent at the Time Goddess’ statue, trying to reset the clock as she raises her rates over time.

To add a new flavor to the gameplay, side-quests are also available. For example, there is one quest where the player must collect a flower to “woo” a female warrior. Other quests consist of picking up a special item or saving a trapped villager from a monster. The great thing about side quests is that they are easily performed and usually pay off with an item that can come in handy for the final boss at the end of a stage. At times, a villager will be so pleased with your performance that they will actually join your party and assist you on your travels. Party battles work the same as the solo experiences, but with the said party member battling right beside the hero, nearly doubling your chances of survival. Some villagers however can simply be “hired” for their assistance, whether it be for battle or to clear an obstacle that blocks a path in the overworld. 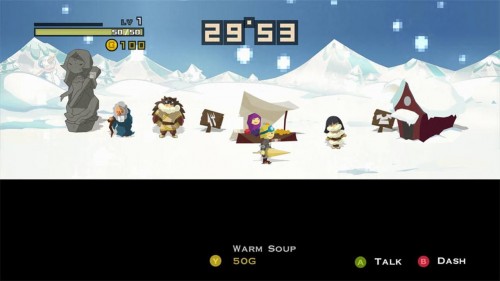 I am really big on exploration in any RPG, and I was a bit worried I wouldn’t be able to actually get to know the world and people I was saving in such a short time due to Half-Minute Hero’s speedy delivery. Thankfully, this is not an issue as the game seems like it wants you to talk to everyone and check every nook and cranny found within the relatively small worlds. Doing so even pays off in this title with rewards that ease the difficulty of each level’s Evil Lord, which lets the player decide how they want to strategize overall.

I think the reason I fell in love with Half-Minute Hero is due to how well it blends of all the aforementioned techniques together for one quick burst of RPG pleasure. Side-quests are not distracting and compliment the the main quest perfectly and collecting loot and defeating random enemies never becomes a bore as money is mandatory to keep the timer in check. After each “game” is complete, the credits roll and a new item is given to better your equipment for the next mission. I can say things can feel a bit repetitive at times due to the rinse and repeat formula, but thankfully the enemies and witty NPCs do a fantastic job at keeping the game fresh and humorous throughout.

After you complete the Hero 30 mode, new modes become playable with different characters, offering a slightly different experience with shiny new sprites and a few changes to the main game. Online leaderboards are also available for those who want a bit of a competitive edge with their game, leading to a further incentive for multiple playthroughs. Half-Minute Hero: Super Mega Neo Climax also includes a multi-player mode, in which allows for multiple players to work against eachother to finish a quest first. This game may come with the gimmick of being half a minute, but hours addictive gameplay and a mass amount of content can certainly lead to a title that feels worthy of a disc release.

Graphics/Audio
If you played the PSP version of Half-Minute Hero, you might remember the 8-bit graphics that the first one boasted. While there is an option to revert back to this classic look, Super Mega Neo Climax features new and cartoony visuals that are full of life and actually enhance the characters’ personalities. The overworld isn’t very detailed, but that sort of plays into the very games that Half-Minute Hero parodies and the end result is a very fitting one. 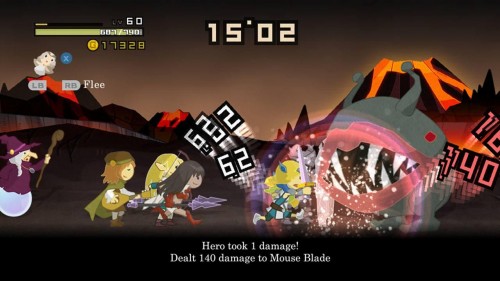 As far as the music in the game goes, we are treated to a rock soundtrack full of epic battle melodies. With the time pinch in play, this enhances the urge to move faster and adds a bit more pressure to the already hectic adventures. Sound effects are a bit more subtle, but do their job well as the constant “clack” of a club always comes across as satisfying when tackling a group on enemies.

Overall
Half-Minute Hero: Super Mega Neo Climax takes a bit from the greatest games of all time, adds in caffeine, and provides a brand new experience in the process. I was most impressed how the game threw together all the core elements of an RPG and somehow tied them into one neat package, where each worked to compliment the main objective of the game. Those who are looking for a charming cast of characters can also look no further, as the NPCs are full of quick one liners and add a lot of humor to the game without ever becoming annoying or overly corny. With a ton of content, extras, and addictive yet familiar gameplay mechanics added in, this is one RPG that demands attention and is sure go down in the books for breaking new mold in the genre as a whole.