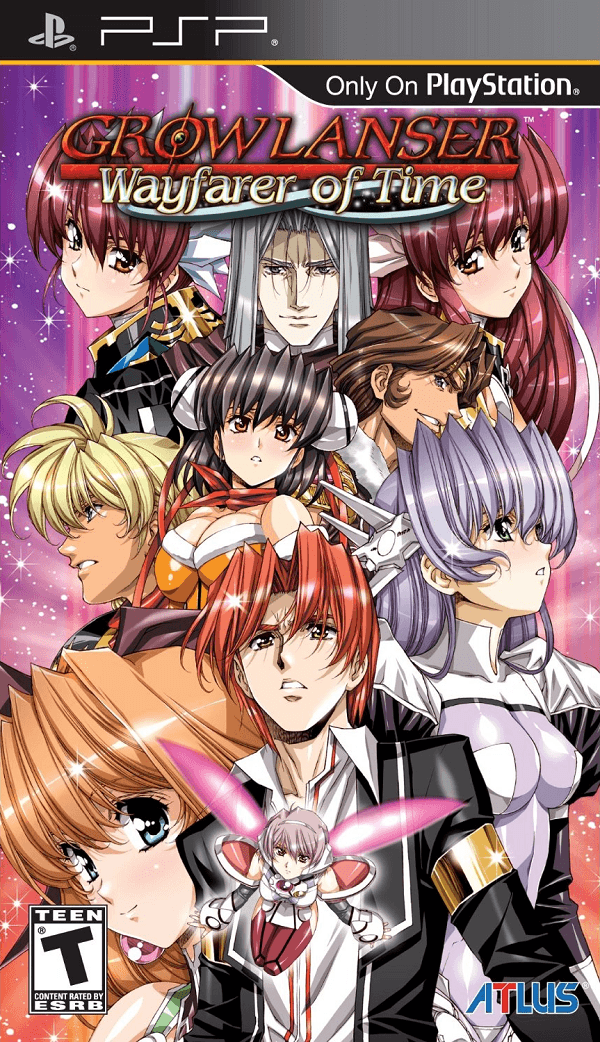 Overview:
Despite the fact that Sony may have a brand new handheld in stores, it seems that the Vita has become the device meant to catch all of the dust that has fallen off of the PSP in recent months. Perhaps the most damning reason for this is simply due to the fact that the Vita happens to have forgotten that the RPG genre exists entirely. Thankfully Atlus USA still has RPG fans covered and the PSP is their method of deliverance.

Their offering this time to the RPG lovers of North America is quite a unique little title called Growlanser: Wayfarer of Time. Originally developed and released in Japan back in 2003 on the PlayStation 2, the title never managed to make it overseas. Last year the title was re-released in Japan once again on the PSP and less than a year later. Now Atlus USA has successfully brought the title to English fans everywhere, but is it worth your time? 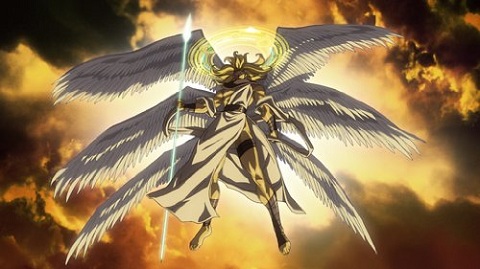 The story of Wayfarer of Time follows a young man named Crevanille (though his name can be changed to whatever the player wishes.) Crevanille was given to the leader of a gang of mercenaries as a child with the message that he would one day play a key role in saving the world. Despite these claims, he grew up like a normal boy would and ended up becoming a mercenary himself.

However during one of the missions his mercenary group has been sent on a horrific scene occurs. A six winged angel suddenly appears in the air and begins destroying everyone and everything in its sight. Ironically, rather than being the saviors of humans, these angels have been sent from heaven to destroy mankind once again, just like they did two millennia  ago…

With the angels wreaking havoc on the world, Crevanille’s origins make him uniquely fated for the task and he must set out on a mission to not only discover a way to put a stop to the angels and save the world. Along the way he will run into a number of fighters and other creatures which can join in his mission to defeat the angels. Interestingly enough, Growlanser: Wayfarer of Time features a relationship system that will allow the player to grow closer with their party members. 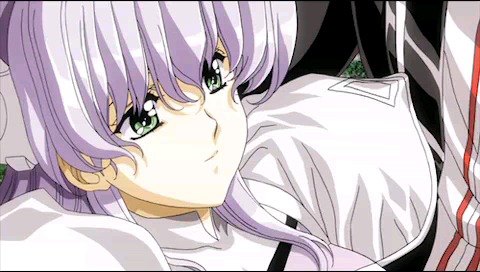 Even more interesting is the fact that, unlike other titles with similar mechanics, relationships are formed with everyone in your party rather than just your female allies. There are even some non-party members swayed by your dialogue choices throughout the game. These choices are very plentiful and can happen as multiple times within the same conversation. Choosing different responses allows the player to experience a number of different interactions with the characters in the game and helps create a few new experiences for those wanting to replay the game.

This is fortunate considering the fact that a number of the characters you encounter are rather bland to begin with and only start to move out of shallow territory further into the game itself. This is a bit of an issue with Growlanser as a whole, because while the title may start out relatively strong with the introduction of the main story elements, the game is horribly paced as far as story is concerned. 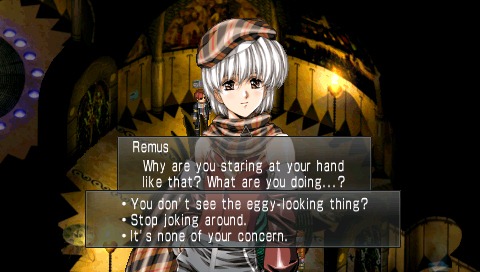 It may be due to the title’s age, but the truly enjoyable elements of Wayfarer of Time’s storyline only begin to pick up a few hours into the game where many fantastic characters begin to be introduced and the plot begins to advance at a steady pace with various twists to keep the player on their toes.

So while the title may start off with a simper, gamers who stick it out through these first few hours will be treated to an enjoyable and engaging experience with interesting character interactions and a story worthy of its forty plus hour length of completion.

Visuals & Audio:
Being a port of a PlayStation 2 title developed back in 2003 and then released on the PSP, Growlanser: Wayfarer of Time’s visuals can still be both impressive but also a bit bland as well. The overworld visuals and the environments the player walks through are mostly very bland and sometimes even fuzzy in appearance while the sprites used to navigate these worlds can best be described as adequate enough. 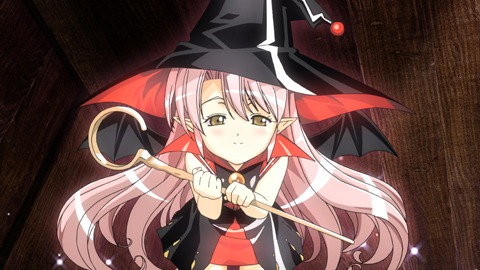 Where the game really shines is in the dialogue sequences and anime styled cutscenes. The animations are truly a treat whenever they appear thanks to the high level of quality they contain, while the character designs shown during dialogue are impressive, albeit a bit too shiny. It is worth noting that there is a very heavy anime-feel to the character designs, with females often having some rather off the wall attires, however for this reviewer that is a plus more than anything else.

It is worth noting that the game does feature a little bit of English voice work, however the only time characters are actually voiced is during cutscenes, while normal dialogue is text only. The game’s background music is suitable at best though there are a few pieces of music which tend to be grating after a short while, especially the game’s standard combat track.

Gameplay:
In-between the various dialogue sequences and beautifully animated cutscenes, players will be encountering plenty of Strategy RPG combat. Rather than moving on a grid players will actually be entering turn-based, open field combat with enemies they either encounter in the field or during scripted battles. It is worth noting that since enemies are completely visible during field exploration, there are no random encounters. As such, any enemies encountered in a field will actually be fought right there on the same field with no transition, making for quick battle entry and exit. 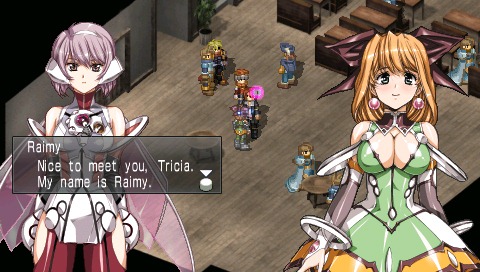 Now earlier I mentioned combat was turn based, but it is turn based with a bit of a twist. Rather than attacking in a set order, players will actually be able to take action based on a time gauge. Every action the player makes will increase the time gauge, whereas simple attacks will cause only a small wait time while longer more complicated actions will result in a longer wait time and each time the time gauge empties, the character will be able to take another action.

As mentioned earlier, combat takes place with no grid, meaning characters have free range of movement on the battlefield.  Players can set up to four waypoints for a certain character to follow, or set them to chase down and attack a specific enemy. Interestingly enough, characters do not need to be micromanaged and told to attack the same enemy multiple times, as they will continue to do so until the enemy is defeated or the player issues a new command.  This system can be quite engaging as the player will often have to plan moves ahead of time thanks to the time based turn system, making sure that their spells will finish casting before the enemy comes in close for an attack, etc. 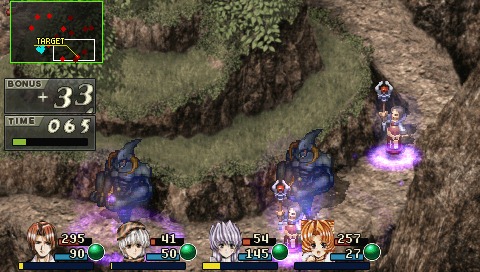 It is worth noting however that a lot of the fighting you will do in Wayfarer of Time can be a bit easy at first, with most field encounters offering a simple grind-fest of levels. However whenever a player enters into a key story battle things will be much more difficult. With only four party members usable at any given time and often special failure conditions set for story battles, trying to finish these battles can be very difficult but also very rewarding.

If the player ends up failing these battles, it is usually not because they are underleveled (though this may be the case) but because they didn’t plan their battle strategy well enough. This does mean however that most battles can be completed a second time through since the enemy will often act in the same manner as before, allowing the player to be one step ahead of them the entire time. 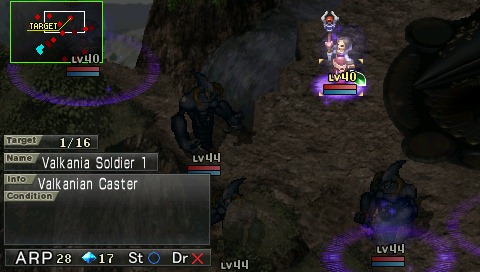 As far as equipment goes, players will actually have rings that they must use for equipment which actually work as both your armor as well as your weapon. There are various customizable rings that can be equipped that offer various abilities and stats, with spellstones capable of increasing these stats even further and adding other bonuses such as adding elements to attacks, increasing item effectiveness and more. This offers a decent level of customization, though perhaps not at the same level as other SRPGs today.

Overall:
While parts of Growlanser: Wayfarer of Time haven’t aged very well, such as poor world visuals (made worse when placed alongside great character artwork) and a substandard soundtrack, the title still offers an enthralling storyline spanning many hours, likable characters, and an enjoyable combat system, there is a lot to love in this blast from the past and more than enough reason to hold onto your PSP.