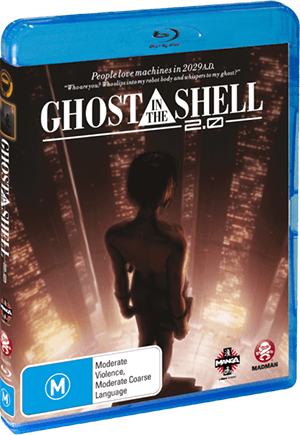 Overview
Ghost in the Shell. It’s almost impossible for any anime viewer to escape this title. It’s a franchise that’s worshiped by old-timers as the herald of technology and a timeless classic. For the rest of us (this reviewer included) it’s an anime that’s always at the back of our minds waiting to be watched. Forever on the to-do list if we could just tear ourselves away from the torrent of new shows. With the advent of the new Ghost in the Shell: Arise OVA series, now is the time to look back on the franchise. Ghost in the Shell 2.0 is a re-release that attempted to revive and modernise the original film. Does it do a classic justice while appealing to newcomers? Let’s dive in. 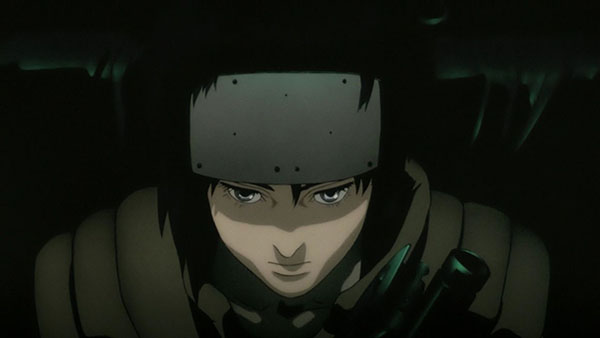 Story
As far as I’m aware this is essentially the same film plot-wise as the original from 1995, give or take a few shots. Set during the year 2029, the story begins right in the middle of an operation involving Major Motoko Kusanagi and her law enforcement organisation Section 9. After a spectacular exploding-head scene, we learn from snippets of conversation between our robotic buddies that this is a society that has progressed beyond merely prosthetic augmentations to one that manufactures bodies, or “shells”, complete with cyborg brains. It’s actually become uncommon for someone to still have their old-fashioned, organic brain. That which makes you human, your soul, is known as a “ghost” thus allowing your conscience to “dive in” to computer systems and even other vacant shells. 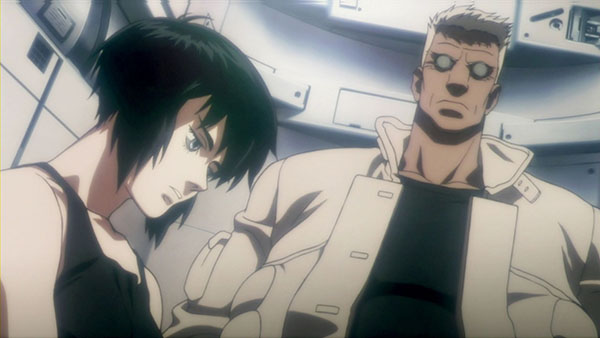 Ignoring how awesome this sounds, such a concept opens up a can of worms regarding what really makes us human. Especially when it becomes known that cybernetic brains can be hacked into, false memories planted and people used at the whim of others. If one isn’t just a cyborg, but also has no real memories, then what are they? If DNA code is life, then is artificial computer code also a life-form should it gain sentience? This is the crux of Ghost in the Shell’s message and director Mamoru Oshii’s genius in film making.

Motoko is soon assigned to capture an elusive hacker known as the Puppet Master. The story thus far was fairly coherent, but at this point it seemingly jumps around when a female robotic body is suddenly discovered on a highway, apparently “fresh” with no ghost inside. What follows is conflicting interests between Section 9 and the secretive rival Section 6, who clearly know more than they’re letting on. 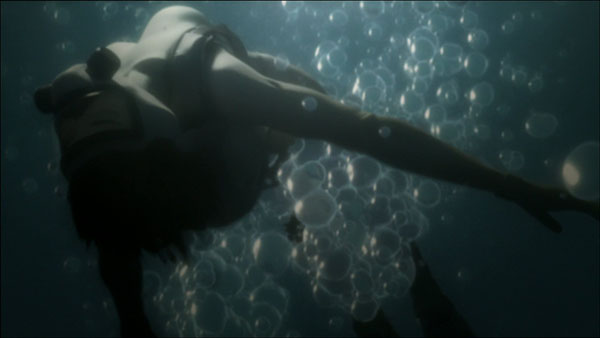 My complaint here is that while it’s ultimately a complete package (providing you pay close attention to the story), you end up with very few answers once you start asking questions. The amount of exposition in the later half and the very open ending make you feel uneasy. You want to know more, to press the pause button and hope that the characters fill you in on all the detail that’s hiding behind the curtains. An 83 minute movie just doesn’t allow you to get attached to Motoko, Batou and the rest of the crew like a TV-length series does. Since the story progresses at a rapid pace you say “Oh, OK, damn..” and move on. It’s actually difficult to remember Ghost in the Shell 2.0 unless you watch it a second time and let it sink in.

You see, GitS goes at its own pace, slow in some areas then information overload in others. Having said that, it doesn’t feel incoherent like some other anime movies. (I’m looking at you, Fate/stay Night: Unlimited Blade Works). Everything develops as it should, albeit not exactly catering to the viewer. It really is its own beast. 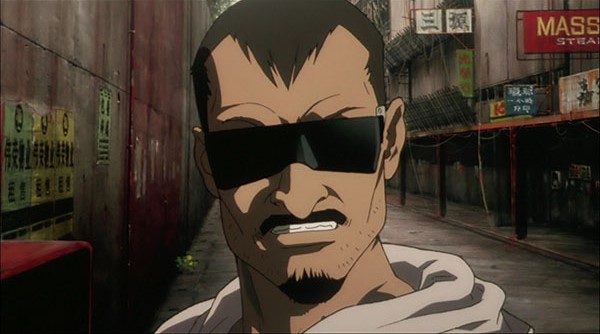 Visuals
2.0 retains much of the gritty visuals of the original. It’s the attention to detail, whether it’s the futuristic but almost depressingly run-down city or the authentic weapon design. Ghost in the Shell feels alive and completely believable despite the far-flung concepts of artificial intelligence and cyborgs. Oh, and this needs to be said. Robots are HEAVY, no matter how lean the body is. GitS is fantastic in portraying this fact, with Motoko crumpling the ground as she lands from the air despite her size and unable to float on her own in the water.

Onto the CGI, this is a hit and miss. Personally I wasn’t that bothered by the almost PlayStation 2-like cinematic graphics that were injected in some scenes. Admittedly, they probably should’ve just stuck with the original animation as pure CG wasn’t good enough but it also wasn’t smoothly and discreetly implemented like in Evangelion 1.11. This might be a deal-breaker for diehard fans, but newcomers have enough to digest than to waste brain power worrying about the CGI. 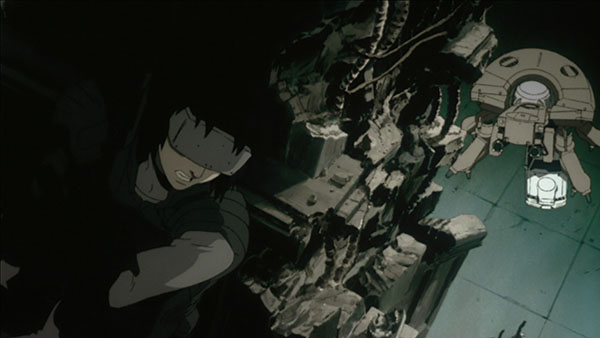 The several action set-pieces are visceral, not over-the-top, largely thanks to the authentic combat direction and hand-drawn animation. Weapons do real damage here, whether it’s a 9mm or high-calibre. Unlike many modern sci-fi anime where the plastic-like guns and sidearms simply spray, ineffectively bouncing off everything.

Audio
The sound has been remastered and the voice-acting re-recorded with the original voice actors. The Puppet Master has been given a new voice, however. I watched this in Japanese out of preference, but given how downright gritty and mature Ghost in the Shell is you’d be glad to know the English cast perform admirably.

The sound effects are great too, matching the well-crafted visuals. The highlight in the audio department is the soundtrack. Kenji Kawai (Mobile Suit Gundam 00, Fate/stay Night: Unlimited Blade Works) has faithfully recreated the ethereal and atmospheric musical score that gives the whole movie this bleak feeling. It’s just phenomenal when everything stops and you’re fed images of the populated but at the same time eerily empty city to the backdrop of this music. 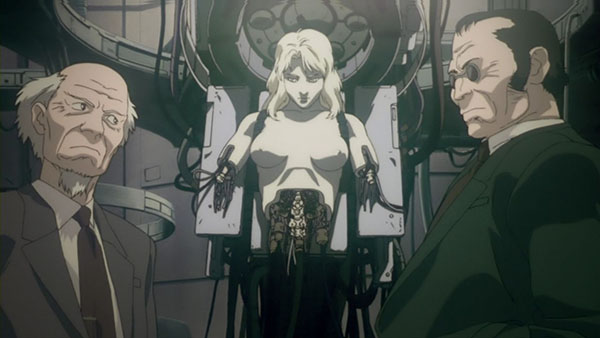 Extras
With no physical extras in sight, you get on the disc a Making-Of “Production Report”, Creator and Director biographies, character dossiers, a theatrical trailer and a glossary for those who have no clue what anyone’s talking about. There’s more than a few of us out there.

Most importantly, though, you get the original “1.0” film included. That pretty much seals the deal for anyone unhappy with how Production I.G. have handled the remake and, in particular, the fairly obtrusive CGI.

Overall
This is essentially a re-release of a proven classic for the modern market. Ghost in the Shell 2.0 provides a solid sci-fi romp in a fantastically realised setting, with plenty of intrigue as the plot takes a more complicated, almost psychological turn. It isn’t perfect, though. The open ending won’t work for everyone, the visuals aren’t consistent and the story can sometimes be as elusive as the Puppet Master himself. I can’t help but feel a longer run time would’ve allowed everything to sink in, maybe insert another action scene or two if need be. Many people will sit there for 83 minutes and feel a little cheated at worst but wanting to see more at best. 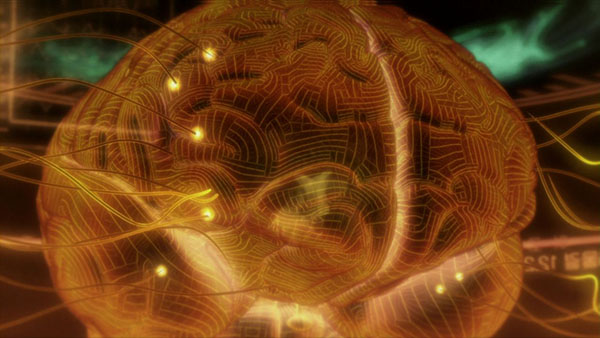 This film was ahead of its time in its depictions of AI and technology, often serving as inspiration for further science fiction hits down the line. The whole “dangers and threats” (if looking at it from a politically correct viewpoint) of hacking and information warfare are more relevant in today’s world than ever before. The year of 2013 is strikingly different to 1995 when this was made. We might not be plugged into networks as depicted, but we’re connected 24/7 to technology all the same. In this regard, Ghost in the Shell is important to watch, now more than ever.