Have you got some SPACE on your mobile device? Sick of RUNNING errands and just want to chill out and play some video games? Are you excited to hear all my terrible space and running themed puns? Meet Galaxy Run by Spiel Studios. It may not be the most memorable game of all time, but it’s casual, it’s fun, it’s addictive and is currently $0.99 at the App Store. With a catchy soundtrack and an awesome old school feel, this single screen runner is worth checking out if you’re up for a challenge. May the force be with you! 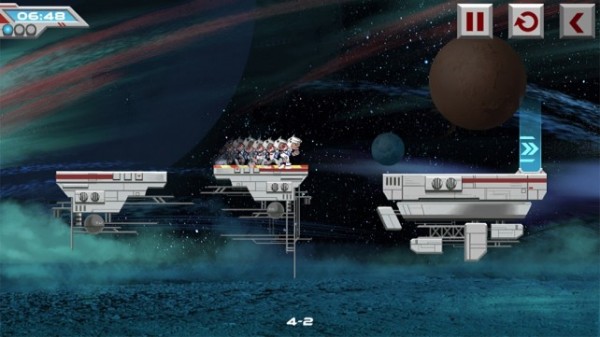 The controls are so simple a baby could play this game, but I wouldn’t suggest giving your phone to that hypothetical baby yet because this game is pretty difficult. Also, don’t trust your phone with a baby, that’s stupid. Galaxy Run is a single screen runner with plenty of punisher platformer elements that I haven’t been tortured with since Triangle Man. Players take control of Rez, an astronaut trying to get home by running, jumping and telling gravity to piss off. Players say goodbye to virtual joysticks and hello to a single tap of the screen to start movement, but once Rez is running he won’t stop until he either gets to the end goal or dies like a turtle in Super Mario. By tapping the screen again Rez will jump over obstacles, and everything else is automated. This can range from grappling hooks to using power ups. It may sound easy, but that’s far from the case as level design constantly gets increasingly hard. What should be commended is how the developers choose to introduce new types of obstacles along the way, with easier levels to let you get used to the new mechanics before going back to insanely difficult. It’s things like this that make every goal seem achievable and stops what could’ve been infuriating hard game into an enjoyable, challenging one. Every level also includes a timer, which continues even after you die. This adds up until you’ve completed the level and will then judge you. If you get three orbs you’ve 100% cleared, if not then you suck. This is to add to replay value and not to keep you stuck in a level as once you’ve completed you’re free to move on. Levels are also short, sweet and fast paced so everything constantly stays fresh while also exciting. A shop is also present with power ups that encourage the standard in-app purchases and if you do well you can also unlock secret levels. I haven’t said a pun in a while so I’ll just end this paragraph with saying that the level design is astronomical! 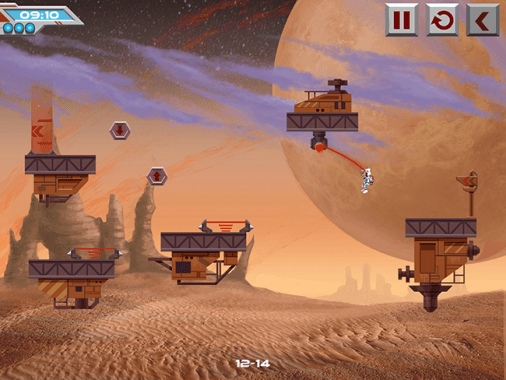 The biggest highlight of Galaxy Run is it’s amazingly catchy soundtrack. Featuring autotuned vocals and various electronic influences, these tracks capture the fun and excitement perfectly, encouraging the player to push forth through the various obstacles that lie before them. Graphics are also a major plus. The retro-inspired visuals are filled with personality and go hand in hand with gameplay. All together the presentation comes across as solid and well polished coming together as a impressive package. One might even go so far to say it’s….out of this world! Yeah I know, I’m terrible. I’m ok with that. 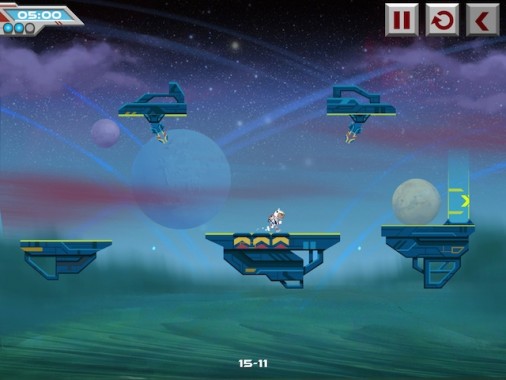 Galaxy Run is the full package. Pick-up-and-play controls, challenging level design, replay value, fun soundtrack and retro graphics make for a solid casual title that even hardcore gamers can enjoy. The quick, short levels lead to fast and fun gameplay that’s always feeling fresh. That being said it’s held back by the fact that at the end of the day it’s still a really simple title, perhaps at times too simple. The most important thing to say about Galaxy Run is that it’s fun – something many mobile games forget to be these days, and that’s special regardless of what galaxy you’re from. It’s as simple as that.