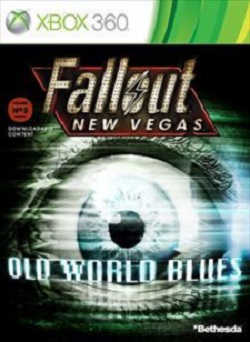 Overview:
Fallout: New Vegas is a game that lately has been supported quite well with DLC packs. First we were captured and forced to navigate the Sierra Madre at the risk of our head exploding back in December and most recently we navigated the canyons of Zion National Park. Now Obisidian and Bethesda are back again and this time they have an entirely new experience for players. With rumors circulating about the Big Empty, what does Old World Blues bring to the table by allowing the Courier to travel there?

Story:
Things may have been a bit more serious in the past two ventures into extra territory that the Courier has made recently, but Old World Blues beats to the sound of a different drum. A drum that is not only full of comedy and strange new additions to the Fallout universe, specifically to the character himself.
The Courier will receive a transmission and therefore a mission similar to past adventures in the Mojave Wasteland but as soon as you arrive at your destination things immediately take a different turn. Being summoned to a destroyed drive-in you discover a crashed satellite that requires the player to attend the show at midnight, only to find a giant eyeball staring down from the screen at you. 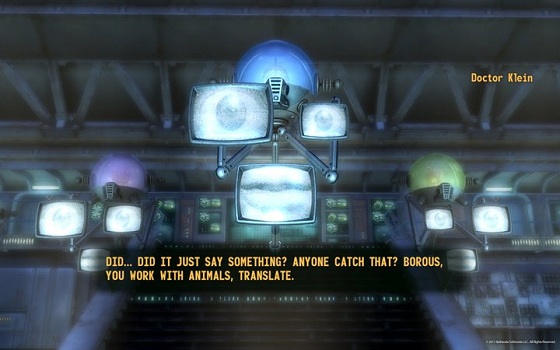 After activating the satellite, things immediately take a strange twist as players are teleported to the Big Mountain research facility, also known as Big MT, or known to wastelanders as part of the Big Empty. The player initially feels different than usual, heavier. Then as you find out where the hell you are you soon are greeted by the strangest thing most players will have encountered in the entire Mojave wasteland, a group of floating robots with brains in tanks and extendable monitors that make up their eyes and mouth.
These creatures inform you they are actually intelligent scientists who reside in the Think Tank of Big MT and they have some news for you. The courier is feeling a bit heavy for more reasons than having packed on a few pounds. Dr. Klein informs the courier that they have decided to remove your brain… your spine and also your heart. The good thing about this is that they have given you new robotic parts to replace these missing vital organs.

During your exchange with the extremely eccentric and off the wall dialogue where you are first treated like a unintelligent lifeform and then are screamed at because you are waving your multiple “hand penises” all over the place. The chat is very well paced and there is usually comedy behind nearly every bit of dialogue choice the character is provided. Plus, given your skills are high enough you can unlock a plethora of extra information as you speak with the other scientists in jars inside of robots inside of the Think Tank.

These scientists have a job for you, a job full of fetch quests inside the crater housing the facility. Another one of the scientists has gone even further off the deep end than the rest and is now threatening to kill everyone on his former team. His name is Dr. Mobius and not only has he unleashed an army of robotic scorpions after you, but he also possesses your brain. Bad thing is that without your brain, you are unable to leave this strange yet torturous place. 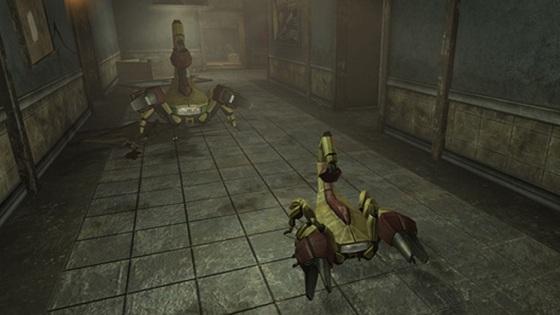 As you are given your missions, this is the first area where, plotwise, Old World Blues is much different than past add on content. In Dead Money the player was more or less forced along a linear path to finish the objectives set for them or they would die, while Honest Hearts possessed annoying followers who would try and nudge you towards the quest missions. Old World Blues does none of that by providing a fully open experience that not only allows players to perform their fetch quests in any order they want to, but also explore the rest of the crater and discover all 35 new locations hidden inside.

Exploration is discouraged by the scientists of the Think Tank but it is certainly encouraged for the player. The non-storyline areas of Old World Blues provide perhaps the best new content to date, as you will find new explanations for various creatures of the Mojave such as the NightStalkers and other surprises that are a must see. Put this together with the fact that the whole loss of your body parts is a reference to The Wizard of Oz and you have one of the most open experiences with the best and funniest story of all the downloadable content packages so far.

Graphics:
As always there are new items included in this downloadable package as well as a few new enemy types. The new enemy types are rather well designed, especially with the multiple sizes of robotic scorpions attacking you all of the time. Another favorite new enemy is a skeleton that is still being piloted by its trauma prevention suit, still moving the body beyond death.

The Big Empty is a nice place to explore as there are many different places to be seen, with a decent amount of variety inside of places. The first thing players will see is a scenic view of the Big Empty at the top of the Think Tank and this provides a nice overlook of the entire area which certainly looks cool, especially with the gigantic glowing forcefield all around you.

Audio:
With the introduction of a number of new characters, and being heavily focused on dialogue near the beginning the audio quality of this piece of DLC is crucial. Thankfully Old World Blues contains some of the best voice acting you will see in the entire game. The various appliances inside of The Sink will constantly chirp in as you walk around the area, and their voices are impressive, especially for optional characters. 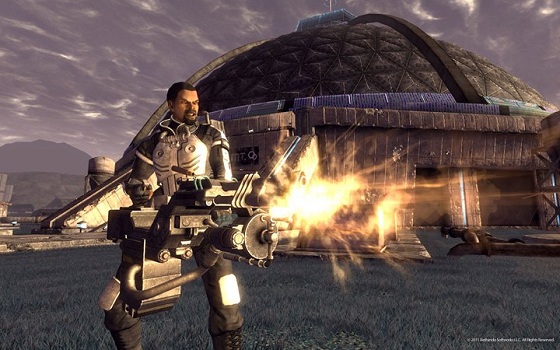 The Think Tank brains all have their own unique voices and Dr. Mobius’ voice will have players scratching their heads trying to place who he sounds like. The voicework is stellar throughout and adds another level to the tongue in cheek humor that abounds in Old World Blues.

Gameplay:
As you first make your journey into Old World Blues you will notice something different from past DLC. You will be able to take whatever you want to with you. You will still have to leave your companions behind but you will be able to take any and all equipment you deem necessary along for the ride, which is a helpful feature that makes things a bit easier on the player.

Not much has changed in Old World Blues as far as gameplay goes however. Nearly all of the quests you receive are going to a certain place and obtaining an item, or making moral choices that will impact the ending segment of the game. There are a few interesting test areas that the player can choose to run through repeatedly, though the benefits quickly run out of doing this.

There are a handful of new weapons that can be added to the Courier’s growing armory of strange and unique equipment. The most unique of these weapons is a K9000 Cyberdog weapon that literally barks and snarls at your enemies as it “poops” out bullets. There is also a Sonic Emitter that is a vital part of the story as well as a weapon that disintegrates force fields and is powerful against machines. There is also a Protonic Inversal Axe which may be one of the most powerful melee weapons to use against electronic enemies.

As usual the player is also given a level cap raise by five which adds a handful of new perks. The perks this time are quite useful, and one of them will have Hardcore mode players dying to purchase the content just so they can receive easy to obtain powerful healing items. There are three perks added right at the start simply because your body has been augmented with cyborg-like equipment. 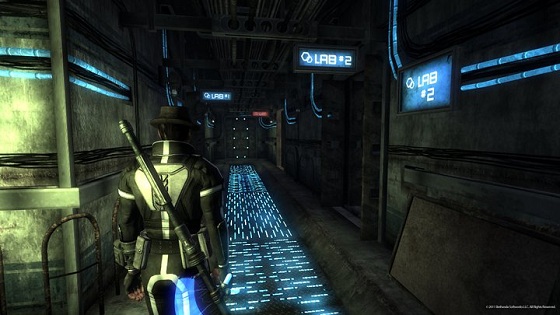 Another neat feature to the gameplay is the fact that the player can venture out and obtain personality holodisks from the Big Empty and install it into the various machines in “The Sink” which has been made the players home. These personality disks turn on the various machines and each of them has their own special personality. The Auto-Doc can heal your wounds, a book chute will destroy any communism literature (any book at all), a demonic sounding toaster will rip out the innards of other toasters and much more. These appliances are another highlight in an already shining example of DLC done right.

Overall:
Old World Blues may be the third piece of downloadable content for Fallout: New Vegas but it is by far the strongest of the bunch. There isn’t a whole lot changed from your standard gameplay formula but the amount of content added is certainly worth the price of admission. Simply running through the story alone will take the average player around six hours, but with many areas to explore it would be a waste to simply blow through the quirky and enjoyable world that has been hidden away in Big MT.