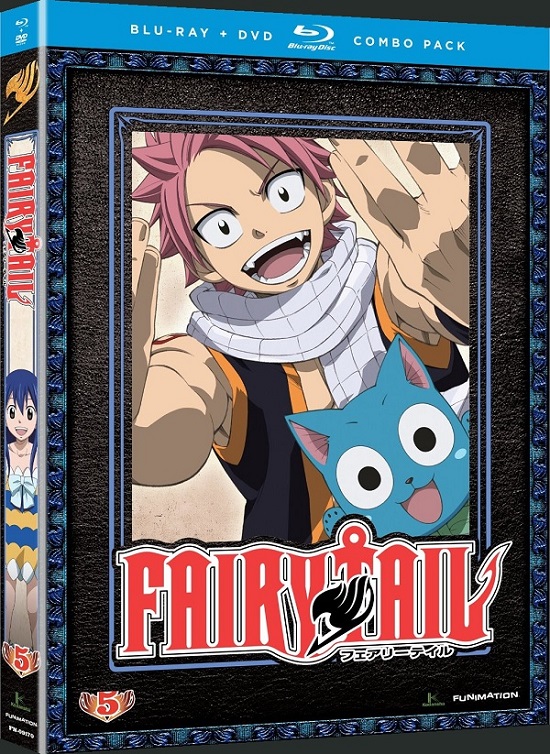 Overview
It’s been almost a year and a half since we last saw Fairy Tail in North America but you cannot keep a good shōnen series down for long, especially one as great as Fairy Tail. As such, FUNimation has started releasing their second set of Fairy Tail parts beginning with Fairy Tail: Part 5. When we last left the Fairy Tail guild, they had just wrapped up an internal issue that saw every member of Fairy Tail in action. How will things fair in Part 5? Let’s find out.

Story
Unlike the past few releases of Fairy Tail back in 2012, Fairy Tail: Part 5 finds itself in the unique position of being able to start off the release without having to wrap up a previous story arc. Thanks to Part 4 wrapping up the Laxus arc, Part 5 is able to hit the ground running. Unfortunately it does the opposite and instead provides some simple one-off episodes focused more around comedy and some character development for Lucy. 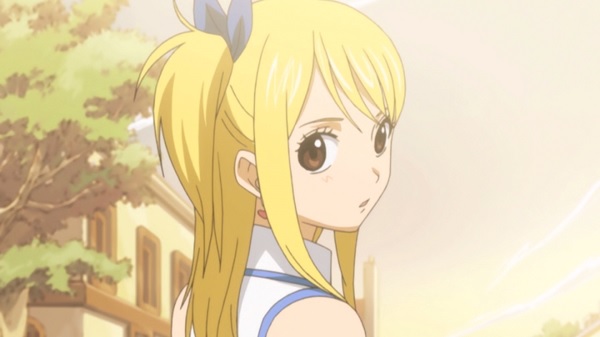 While a bit annoying considering this release starts out with simple standalone episodes, they serve as a barrier between the larger story arcs and help reacquaint viewers with the cast. There is also a focus on Lucy throughout these simple episodes since while Natsu and the gang may be the stars, she remains the most down-to-earth character of the bunch and seeing her grow as a character as she confronts both personal challenges and opponents in combat is one of the highlights of the series.

Anyways, once these one-off episodes wind up the Fairy Tail guild has been asked to join a Wizard coalition to face off against the Oración Seis, a dark guild that is one of the strongest in the land, with six extremely powerful members. Because of their strength, the coalition is needed and Fairy Tail sends their best team consisting of the main cast, Erza, Gray, Lucy, Natsu and of course, Happy. 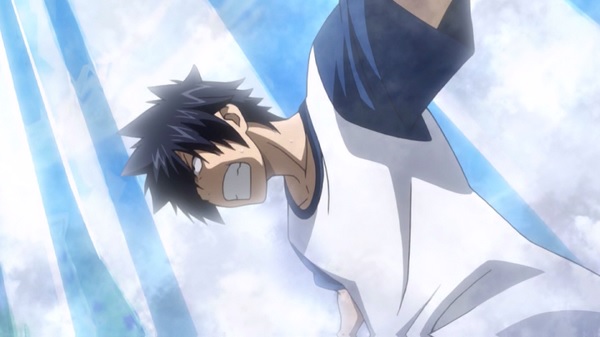 Since the series’ debut, most of the extra non-Fairy Tail members have been enemies but this part sees the inclusion of a number of new characters and a number of allies as well. With Fairy Tail teaming with members from Blue Pegasus, Lamia Scale and Cait Shelter, viewers are introduced to the next major story arc which unfortunately does not finish in Part 5, the Oración Seis arc.

Since Part 5 contains the beginning of the arc, viewers are given time to grow familiar with the newly added characters, though the obvious focus on the young girl Wendy feels a bit too heavy handed as it clearly makes her the key character of this story arc. Though considering both the opening and ending themes prominently feature her, subtlety isn’t the series’ strong point. 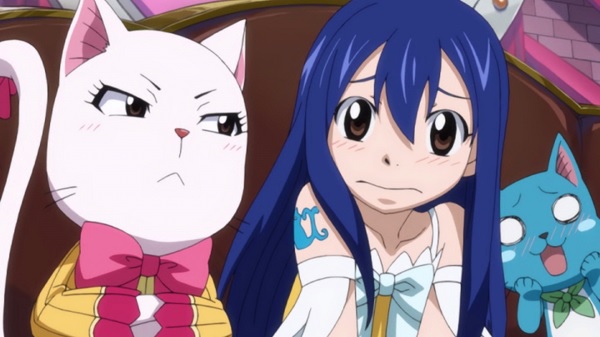 Despite their numerical superiority, the strength and abilities of the Oración Seis quickly throw the team into disarray as many members are taken out of action and the rest of the combat ready members sally forth to put a stop to Oración Seis and their search for a dark magic that can literally change the nature of the world itself.

Viewers are quickly given key battles which play out through the second disc in the package as the members of Oración Seis take on the Light team, but despite the high amount of action that takes place, there is actually a decent amount of story interwoven with these fights. Attentive viewers will notice numerous callbacks to past story arcs, especially the Tower of Heaven, throughout these battles, especially since a certain someone makes a comeback this time around. 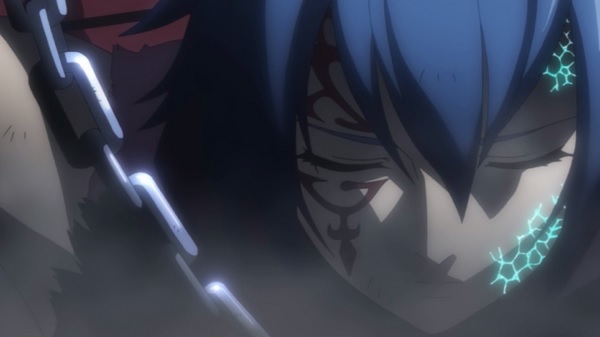 It is also worth noting that despite the high combat content, the series’ powerhouse Natsu only has a small amount of combat time compared to the rest of the cast. While Natsu fans may not appreciate his diminished combat time, it gives Fairy Tail a chance to show off one of its best features, an expansive cast of characters with unique abilities and personalities that have been, or are in the process of, developed to a point where viewers actually care about their battles.

Part 5 brings viewers to roughly the mid-point of the Oración Seis arc and features quite a bit of story woven into the combat sequences and while it may take a while to get going, the number of new and old faces and consistent humor make Part 5 a successful return for Fairy Tail as viewers wait for the next part to be released.

Visuals
One of the things that I’ve always found wonderful about Fairy Tail is the amount of characters that the anime manages to contain and actually give screentime. While there are other shōnen series that trot out new characters every so often, many of these characters are shown once and never again, or appear similar to already existing characters. In this part viewers are introduced to numerous allied characters as well as a new set of enemies, each with interesting character designs, especially when it comes to the leader of Blue Pegasus. 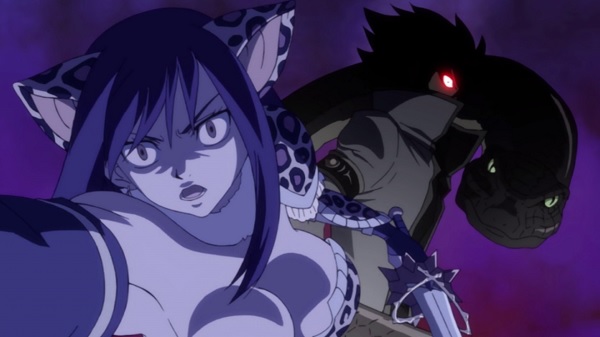 The animation quality throughout Part 5 is impressive more often than not, but there are some noticeable drops in character detail during a few combat sequences and even in basic talking scene throughout the release.

Audio
It should be no surprise, given this is the fifth Fairy Tail release now, that FUNimation has given the release an English dub. The cast from the first set of releases have returned to reprise their roles while new characters have been introduced and alongside them come a batch of new voice actors. These new actors have done a great job matching the feel of the rest of the cast and Brittney Karbowski’s take on Wendy fits the character perfectly. 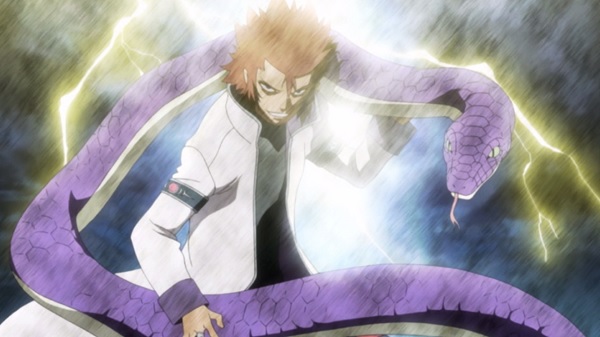 As far as background music goes, numerous themes that we’ve heard before come into play alongside a handful of new tracks which are fitting for the combat sequences but usually forgettable. The opening theme “Egao no Mahou” by Magic Party and ending theme “Holy Shine” by Daisy x Daisy continue to follow the same themes as past Fairy Tail openings and endings, which is nice as they have always been pleasing.

Extras
As far as bonus features go, Fairy Tail: Part 5 has what one would expect from the series at this point. There are clean versions of the opening and ending themes, a US trailer for this part of Fairy Tail, trailers for other FUNimation releases and finally commentary tracks for episode 49 and 58. 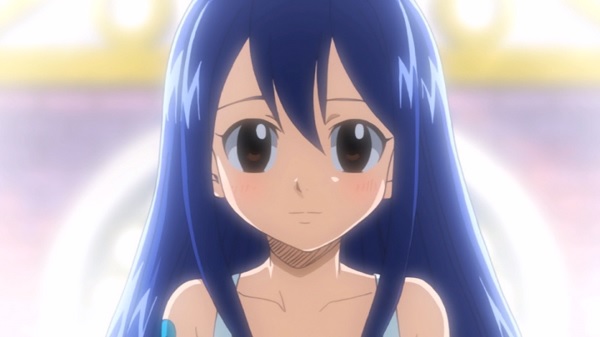 Episode 49’s commentary features Tyler Walker, Todd Haberkorn, Cherami Leigh, and Carl Philips. The cast spends a fair bit of the commentary talking about what they’ve done since the first set of releases finished as well as a bit about the episode itself, making for an entertaining, but not overly humourous commentary. Following that is a commentary for episode 58 which features Tyler Walker again, Aaron Dismuke, Lindsay Seidel, and Cherami Leigh. The cast discusses some of their past works as well as some of the first series that they worked on back when they were first starting out.

Overall
Despite being away for a year and a half, FUNimation’s release of Fairy Tail hasn’t missed a beat. Despite being slow to start, Fairy Tail: Part 5 has everything that fans of the series have come to love at this point, with plenty of action and comedy as well as a worthwhile story tying everything together. Add great voicework to that as well as some mild fan-service and you have what continues to be the best new shōnen series out there.