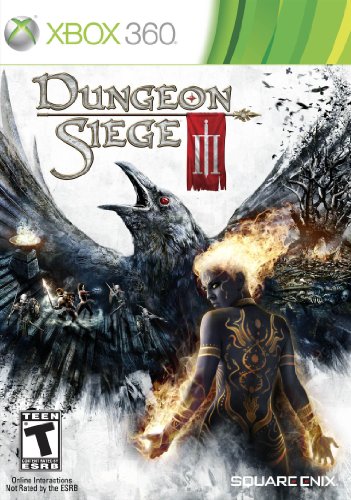 Overview:
Many years ago, Gas Powered Games developed the first Dungeon Siege title. Since then Dungeon Siege II was released and both of these were PC exclusive. With Dungeon Siege III we see the franchise’s debut on the home console, as well as a new development team as Obsidian Entertainment and Square Enix have teamed up to bring this dungeon crawling experience to everyone that wants it. Now dungeon crawling RPGs have become a rarity, especially on consoles. Does Dungeon Siege III have what it takes to possibly revive this genre?

Story:
The story takes place in the Kingdom of Ehb which was founded by the 10th Legion many years ago. The Kingdom of Ehb was prosperous for many years, until the murder of the King. With the King dead, the Legion was blamed for the failure and a woman named Jeyne Kassynder has raised the people in a revolt against the 10th Legion. Jeyne, the leader of the Church of Azunai wields strange powers and under her lead, the people have brought the 10th Legion to the brink of destruction. Only a few of the Legion’s descendants still remain, and they have been gathered together by a man named Odo in an effort to restore the Legion to its former glory.

Players are given a choice at the beginning of the game to choose between four different members of the Legion. The four characters that players are given the choice to play as are named Lucas Montbarron, Anjali, Reinhart Manx and Katarina.  Each has their own backstory and will have unique moments throughout the game that will change depending on which character you are playing as. This choice certainly helps create a great way for players to replay the game without feeling like they have done everything once already. 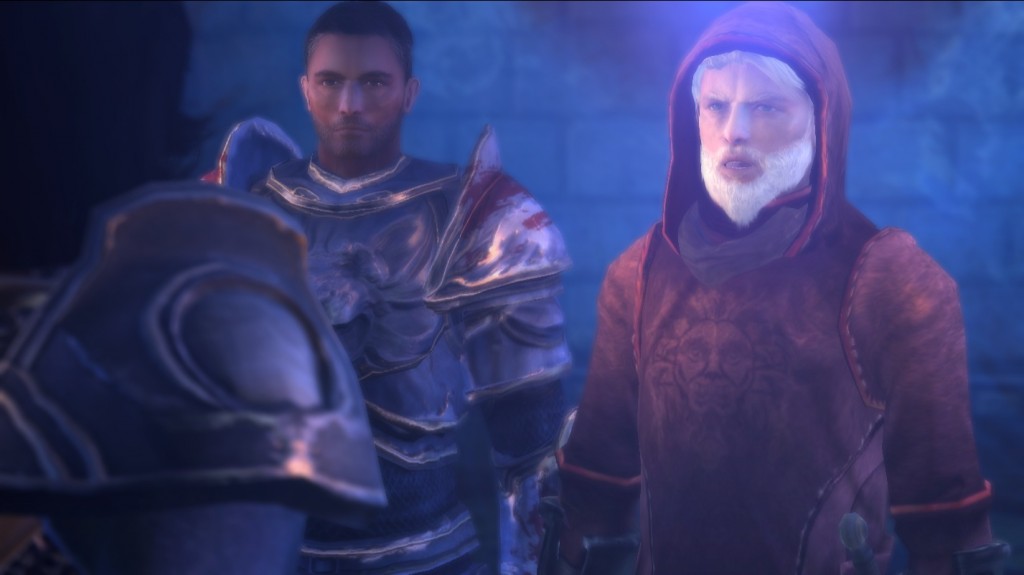 The only thing hindering the replay value is the lack of a New Game+ option which is truly a disappointment because after finishing your first playthrough with a fully powered character, and then being forced to play as a level 1 again is going to drive some people away from replaying the title again.

Being the third title in the series, Dungeon Siege III’s storyline has a few references to past events in other Dungeon Siege titles. Thankfully however, no actual knowledge is needed of the other Dungeon Siege games and there is a plethora of lore and texts to unlock which will help explain certain things as well as expand the DSIII universe.

Now besides the main storyline, there are also a number of choices to make in the game. However these choices aren’t very engaging because a number of the games main dialogue choices actually don’t have any bearing on the game itself outside of providing the illusion of choice. A few decisions you make may affect things in the future, but for the most part you will find yourself ignoring side dialogue simply because it is the same thing you’ve heard plenty of times before.

Graphics:
Any good dungeon crawler needs some variety in their levels, and Dungeon Siege III delivers that well enough that you will not find yourself walking through similar areas often. The environments themselves are very well detailed and you will usually not have to worry about loading times simply because of how well the maps are streamlined together. Normal combat flows well  without issue and the effects of the spells you cast are impressive in appearance. 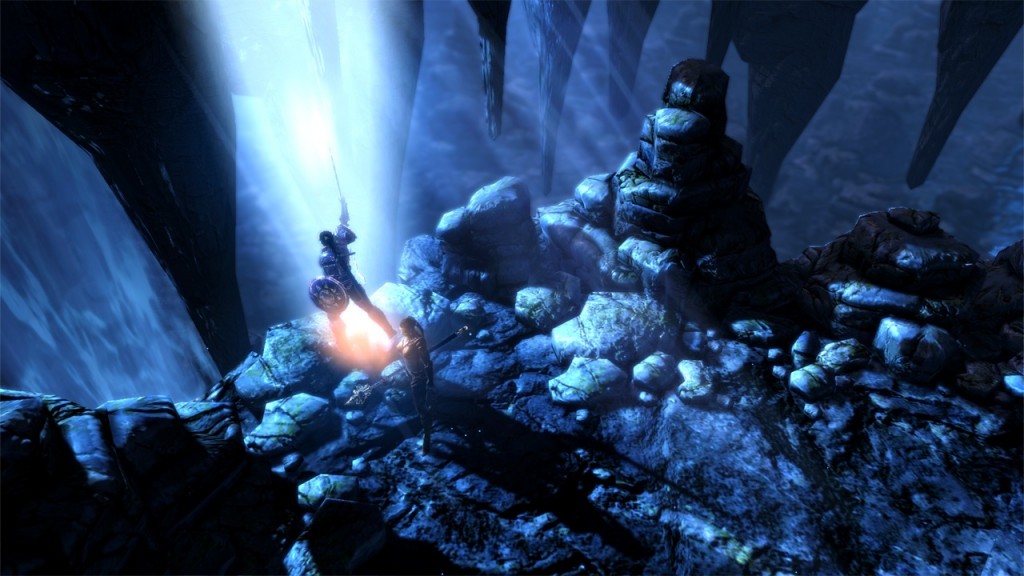 The character models are decent looking and look as well as one would expect in a current generation title. There is a small issue with the way that loot appears on the ground however simply because, with the high view of the camera, it is difficult to see at times. Also as far as the loot goes, there are a number of items which will appear to look the exact same no matter what variety of them you pick up, whereas more diversity in the appearance of the equipment would have certainly been beneficial.

Audio:
The musical score of DSIII is rather impressive. The soundtrack focuses entirely on fantasy styled music which fits perfectly with the dungeon crawling genre. The music is certainly one of the best touches to the game and the battles sound good as well, with gunfire and swordplay sounding as realistic as possible.

Unlike the music and sound effects, the voice acting is very disinteresting. The people that were hired to perform the voice work couldn’t sound less interested in the rolls that they are playing. The fact that there is very little emphasis or put into their performance you will find yourself feeling that the whole story is becoming dull simply due to the voice work. The problem persists throughout the game, even with main characters in the storyline and not just NPCs.

Gameplay:
Since players are able to select one of four different characters to play with, each one of them has a unique way of playing. There are long range focused characters as well as those who are strictly melee and players can base their character selection to their playstyle. The character’s playstyle is well varied, with Katarina being a personal favorite of mine due to the introduction of her magical guns to the fray of swords and sorcery.

Besides the style of play and the weapons they use, each character will have unique loot to their character. Every character can wear a ring or an amulet but every other item they can equip will be unique to their person, with other loot showing up as a gray outline. 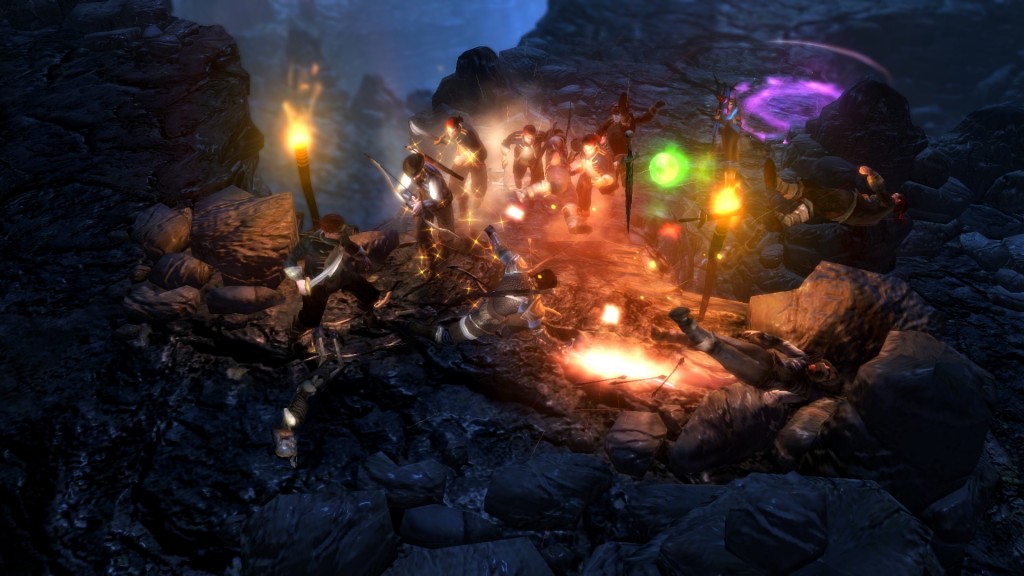 Any dungeon crawler needs to have a lot of different loot. Dungeon Siege III provides this wonderfully. The amount of loot you will obtain can be anywhere from a few pieces of gold dropped from your enemies to a small rainstorm of items coming out of a chest. There are certain weapons that are obviously better than others, and these are highlighted in either Blue or Green depending on their strength.

Players are given the ability to “transmute” items they don’t want in their inventory. The transmutation option will instantly get rid of an item and provide a couple of gold pieces instead of the true worth of the item. Because of this option players can spend a lot of time in their inventory comparing statistics and benefits between different pieces of equipment before finally settling on what they wish to use and what to get rid of.

Now Dungeon Siege III also contains an upgrade and leveling system for the characters. These level ups are based around the abilities that players can learn. Every character will have six unique offensive abilities and three unique defensive ones. Players can learn a new ability once every few levels and if they use a certain ability enough in combat, it will become Empowered. This means that it will gain a permanent upgrade that will make it stronger or more beneficial to the user.

Besides the abilities there are also the Proficiencies. You will obtain proficiency points every time you level and they will be used to upgrade your abilities in one of two ways. There are limited amounts of proficiency slots for each ability which means you will have to choose the best way to upgrade your favorite ability to help out your playstyle. Finally we have the Talent tree. The player can upgrade each talent up to five times and they can improve their character through passive upgrades. The amount of character customization may appear thin at first but it is actually quite well done, with a lot of diversity available for those who wish to mold their experience the way they wish to. 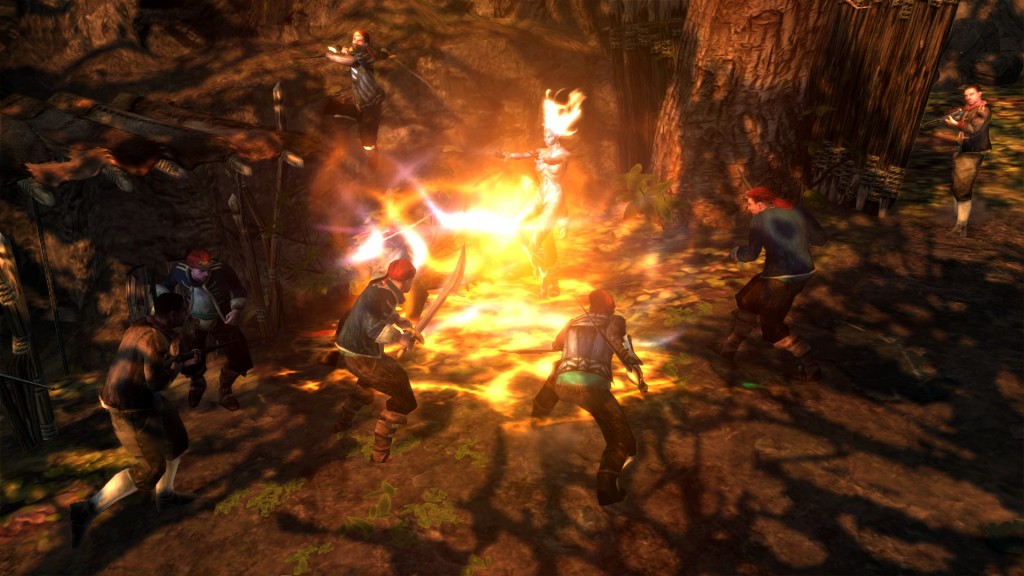 Dungeon Siege III has the option to let players play online, with up to four players playing at once. There is a fatal flaw here however. If you join another players game you will not be able to take your favorite character with you, nor any of the other characters you worked on upgrading as partners. Instead you will be tossed into the game and forced to pick any of the characters that haven’t already been selected. Then you will not be able to take any of your loot, gold or experience back to your own game and this is likewise for those who join your game.

Players have the option of playing offline, privately or public. The problem with a public game is that you will often get people who join your game and will simply leave immediately if they find you are not in a part of the game they enjoy. Also, due to the way that the camera forces the player to have a high view point (practically top down) the camera completely fails during four player co-op. It will become shaky and will struggle to follow the action, often forcing players to fight at the edge of the screen or spasming between characters.

There is the option for drop-in co-op which is enjoyable for those who want to play with their family or with a friend that has stopped over which is a nice touch. Otherwise you will have an AI partner always that will assist you during combat, usually as well as any other player could.

Overall:
Dungeon Siege III is a rather enjoyable game for the most part. Those coming to have a true dungeon crawling experience again will not find themselves left wanting after they are done with the title. An average playthrough of the game will run around nine hours until completion. Though there are a decent number of sidequests to help distract from the main storyline as well as the amount of replayability that the title offers to extend total playtime. Unfortunately the stunted multiplayer aspect means you will often be better off only playing with trusted friends or locally. Dungeon Siege III provides an adequate experience but never goes above and beyond to really set itself apart and live up to its namesake.

I give Dungeon Siege III:

A copy of this title was provided by the publisher for reviewing purposes.