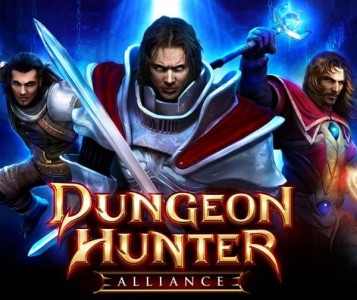 Dungeon Hunter: Alliance is actually an improved iOS game ported to the PS3.  Given that, one would assume that the game is a bit lacking in the content and quality departments.  Fortunately, these are incorrect assumptions.

I’ll be honest, the story isn’t much.  It’s a generic means to an ends consisting of the obligatory and obvious mcguffins one would come to expect.  You are a dead king tasked with traversing the landscape with the aid of a fairy (yes, a fairy) in order to find other fairies and stop whatever insidious evil is out to stop you.  It’s not terrible, but it’s not great or very interesting.  All you really need to know is that there are some elemental based bad guys who have trapped some fairies that you require the aid of.

Aside from the inevitable fantasy RPG subject matter, the story is actually told in a pretty decent way, considering this game’s roots.  Much of the story is told through in game events, with the camera zooming in closer to the character and the events (as opposed to its usual isometric view).  Scattered throughout the game world are small, glowing pieces of paper that will tell you a bit more about the backstory and lore of the gameworld.  A nice touch for those who care, but for those who don’t you will find solace in the fact that you don’t need to read these or pay attention to the story at all.

The easiest and simplest way to describe this game is that it’s a top down dungeon crawler RPG, a la Diablo and the like.  All of the basic elements of these games are present in this one, classes (three) skill trees, randomly generated loot, etc.  If you are any sort of fan of this type of gameplay, chances are you will find a moderate amount of enjoyment from Dungeon Hunter: Alliance. 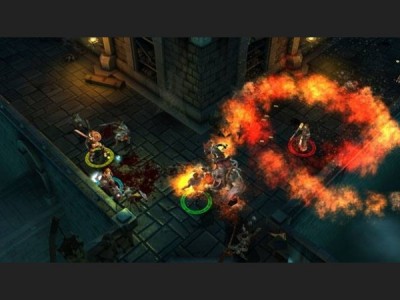 The basic structure of gameplay is fairly predictable.  Gather as many quests are possible (never more than a few) from the latest town you’ve discovered and then venture off into the next dungeon to defeat the boss and claim your rewards.  Along the way you will gather excessive amounts of loot (most of it not being beneficial to you, as is the curse of randomly modified loot), all of which is visually represented on your character.  The variety between different armor pieces and weapons is thankfully diverse, ensuring that you will continue to become cooler looking while gaining better stats all the way until the end; even when you beat the game and begin Legend mode (hard mode), there is new types of armor and weapon models to be found.

Skills will level up and improve at your discretion, allowing for any sort of playstyle one could want, tank, berserker, hunter, rogue, nuker mage, healer, etc.  It’s actually pretty fun to play around with the skill trees to see what suits you, and “play around” you will.  I found myself respeccing quite a bit through my various playthroughs to see what worked and what didn’t, what I liked and what was actually useful.  Unfortunately, there are only 3 slots for equipping abilities which can be a bit of a hindrance (why couldn’t they just use the d-pad?) but it isn’t game ruining.

One thing that sets this game apart from most (in fact, maybe all?) games on the PS3 is that it is 4 player coop, allowing any combination of players both locally and online, at the same time.  No other game that I know of on the PS3 allows you to have local players with you while you hop online to fill in the gaps.  If multiplayer RPG’s are you thing, then this game has you covered.  Hell, even if you don’t absolutely love this genre, if you have a friend or two who you enjoy to game with on the same couch, then I seriously suggest you try out this game.

Another welcome commodity to this game is the level of attention the difficulty gets when it comes to multiplayer.  Most games (that I know of) do not understand how to appropriately scale difficulty when it comes to multiplayer, and by that I mean when you get more party members the game doesn’t recognize it and plays just as if you were alone.  For each person you add the game will appropriately ramp up the difficulty, making enemies do more damage and get more health, meaning you really do need to work together and coordinate SOME sort of strategy.  In my experience, that meant that I (the shield using warrior) would need to position myself between the enemy and my friend (the nuker mage) while he dealt out the damage.  I was still able to deal a decent amount of damage myself, but nowhere near the level that he was capable of producing.  All in all, this was a sound strategy as he would die in two or three shots.  Basically, when you play multiplayer you need to at least have some semblance of cooperation or your teammates won’t be very happy. 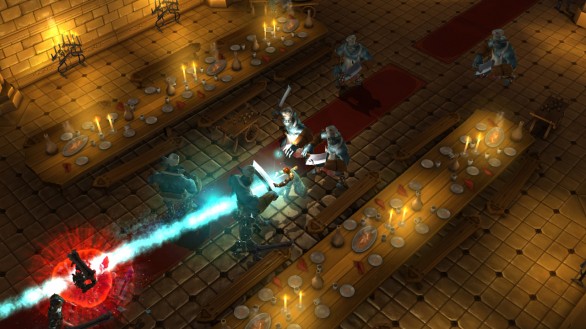 For a game that got its start on iOS, it looks pretty good.  Textures can be a bit rough up close, but the lighting and effects aren’t bad.  It’s always fun to find a new piece of armor or weapon (even if the stats aren’t better than your current) if only to try it on and see what it looks like.  When playing on legend mode (hard mode) you will notice that all of the equipment models are just copies of the same from the previous difficulty.  Copper becomes hard copper, felt becomes velvet, it was a bit disappointing to discover that I would be going from looking like a badass warrior decked out in bulky, spiky armor to some small soldier again.  Luckily, there are new models to be discovered on legend mode.  Rare drops which previously were just a slightly re-colored armor of the current equivalent now have their own look, and they look pretty awesome to say the least.

There is a pretty decent array of locales to trek across like a skeleton filled dungeon, corpse littered necropolis, bandit infested caves and gargoyle occupied balconies.  An avid fan of RPG’s (namely Diablo and World of Warcraft) will instantly recognize a view of the locales as being heavily inspired by these games, which is always a nice, if not lazy, touch. 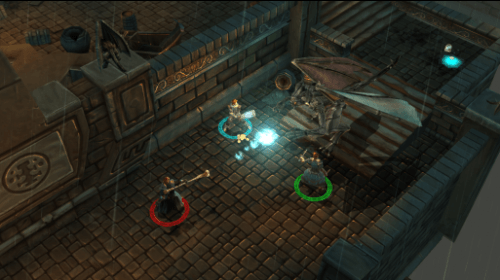 The game is actually a decent length, taking around 8-10ish hours to get through one playthrough, not bad for a digital game.  A few of the bosses can prove to be a bit of a brick wall when playing with other people, especially when some of those other people aren’t much help to you and are basically increasing the difficulty without really adding to your party.

All in all I was pretty surprised by this game.  I went into it expecting it to be a bland rip-off of this done-to-death genre, but the multiplayer and level of content here really allow it to be a fun, multiplayer experience.  Legend mode really makes playing through again worth it, giving you cooler and more powerful equipment and allowing you to further improve your skills to level 10 (previously capped at 5).

However, one thing must be noted, the hit detection.  It sucks.  A decent amount of the time your hits, be it ranged or melee, will just not register.  NOT due to dodging or missing, but due to the games poor level of hit detection.  Even mere barrels, stationary objects that only serve to be destroyed, will prove to be a challenging target to hit with this game.  You can spend an endless amount of time, literally, mashing the attack button on a barrel and never destroy it.  This is especially annoying when you are a melee class with a group of enemies around you and none of them decided to get hit by your area attack, especially when you no longer have enough mana to cast it again.  This isn’t a game breaker, but it can definitely serve to hinder you at times.  If Gameloft can patch it, it’ll go a long way.