Have you ever played Risk? If so, did you enjoy playing it? If you answered yes to both of these questions, you are in for a real treat with Dominion, a revamped version of the classic board game, Risk. As a platform, the iPhone lends itself really well to the world of board games: the easy-to-use touch screen interface, the size of it and the ability to put it in your pocket and take it wherever you please. It’s like those travel board games, minature versions of the real thing designed to be portable, except you don’t have to worry about losing the pieces down the side of the seat, and with the iPhone you can neatly store loads of games in one place to take with you. In fact it’s nothing like travel board games. It’s a whole lot better.

Dominion is no exception, and cleanly stores one of my all-time favorite board games in virtual form. It is a very nice rendition of the classic board game, which makes the transfer very well, without losing too much of the the board game’s character. The strategy game has been simplified, with no actual troops, which have instead been replaced by numbers representational of the size of your forces. Similarly to the board game Risk, there are still the standard reinforcement phases before, and the movement phases after the bulk of you turn in which you attack. However, in contrast to the similarly natured game which this is undoubtedly based on, because Dominion is a video game, the board and the assignment of countries is all generated automatically, removing the time-consuming start-up time of the board game which many found off-putting. 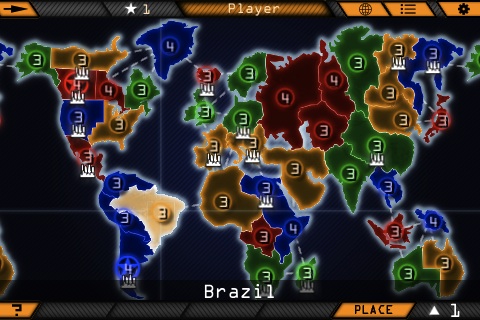 The touch screen controls are simple, almost instinctive too, and certainly well-mapped on the iPhone’s screen. For example, you drag across the screen to shift along the map, pinch to zoom, and touch the attacking region then the defending region to initiate an attack. All these functions should come as second nature to most, especially those with experience with Risk and the iPhone. There is also a tutorial upon your first boot-up of the game, which the game suggests you play, which while the controls are easy to pick-up, is still beneficial to play, as with any new game.

The game does take up a good deal of time, which varies depending on the level of difficulty you are playing on. On the easiest setting, you should have no trouble at all sweeping through the enemy once you start to get the hang of things, whereas on the higher settings, which are quite a significant step up in difficulty, you should find it more challenging and as a result you could get sucked into battles of epic proportions. Dominion is not a game which you can jump into for a short while here and there. Much like the board game Risk, despite vast reductions in playtime in comparison due to an automatic board setup, you will generally have to set aside a decent-sized period of time to play. There are a few of options to spice things up for single player, including changing the winning conditions of the game via the option to create a custom game. Additionally, online compatibility means you can play multiplayer with people all over the world, as well as locally with your friends. It is usually more fun being pitted in tactical battle with another human being rather than AI, so multiplayer is a welcome inclusion.

In conclusion, Dominion is a well polished version of a classic board game. It benefits from a simple and clear setup, and well-intergrated touch screen controls. Different objectives in game, and customisation options make for a weighty one player experience, and the board game style means you’ll be happy to play it over and over again. Multiplayer is just the icing on the cake, and helps to create the social aspect of playing a board game in this virtual version. All this for a bargain price. The game offers great value for money. However, it has to be said that the strategic and slightly long-winded style of the game isn’t for everyone, and if you didn’t like Risk or any of the spin-offs in board game form, chances are you won’t enjoy this either.