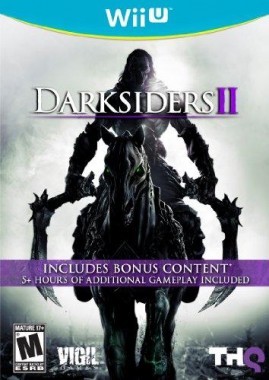 Overview
Darksiders II is yet another launch port-job for the Wii U, giving Nintendo fans a taste of what their new console can do. Sure, we know this sequel was already solid, but this version attempts to be the superior journey of Death, boasting some fresh Gamepad features and extras that are exclusive to the Wii U. Does this port live up to expectations, or is this one port that is better off…dead? Grab your Scythes and prepare for darkness as we give you the rundown on Darksiders II for the Wii U.

Story
Darksiders II starts off heavy, letting players take the role of Death as he sets out to clear his brother’s name (War, for those who have yet to player the first title) for causing the extinction of mankind. Yes, dealing with the apocalypse and attempting to revive an entire race is a great task to partake in, but that’s where the charms of Darksiders II can be found. This game takes every risk in terms of creating an “epic” narrative, and executes it’s story by creating larger than life (quite literally) allies and antagonists alike. 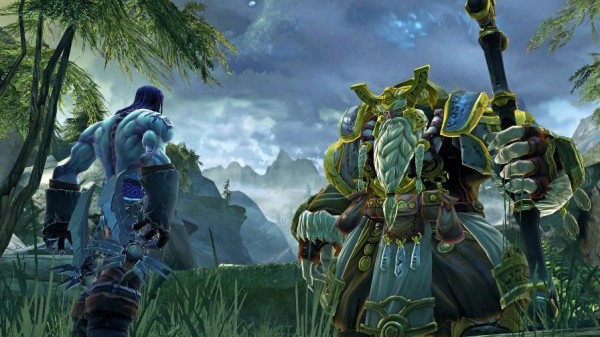 Death himself is also quite likable, equipped with a quick temper and no-nonsense attitude that fits perfectly in this chaotic realm. There are a few times where the plot gets a bit too carried away and starts heading into a territory of camp due to the over-the-top events that take place on this quest, but if you played the first Darksiders and enjoyed every bit of it, this sequel’s own comedic madness should serve as one satisfying dish.

Gameplay
While this is a new game entirely, Darksiders II still carries with it the game core mechanics of it’s predecessor, only improving on elements to fit within the much bigger environments that Death will do battle in. Imagine the quick, parkour seen in Assassin’s Creed, with the hack and slash combat from God of War. Throw in a little Legend of Zelda puzzle solving, and you have the formula that gives Darksiders II it’s heartbeat. Most of you I imagine have already trekked through both titles by now, but those getting the Wii U version should know that the combat is just as polished as it ever was, and those exciting boss battles, quick time events, and well rounded dungeons all have made the transition into the new console effortlessly. 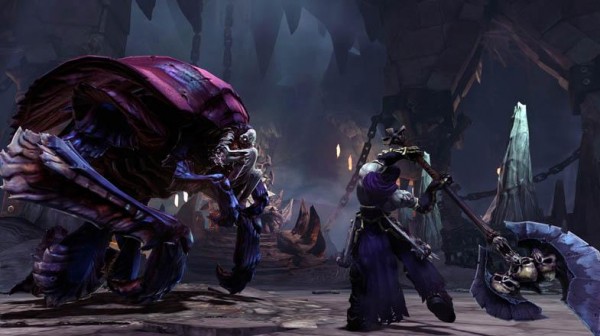 With the much bigger Gamepad controller, one might be concerned that a lot of the inputs would be at foul to a confusing button interface, but yet again, Death is as easy to control as he ever was and the analog controls do wonders to keep that sometimes messy camera in check during platforming bouts where precision is requirement. Are you going to die due to the rigid camera? Probably not. I did have quite a few occasions however that led me pouncing into the wrong direction due to the somewhat jerky and hard to place camera perspective. Jumping from one ledge to the next is still a pretty simple task that requires hardly any effort though – as long as you have the patience to learn some of the trickier jumps as Death rides up the walls of dungeons and ridges of mountainous landscapes.

The combat within Darksiders II is the true star of the experience, as at the heart of this game lies one of the most polished hack and slash titles we have seen this generation. Death wields two scythes that can slice up a foe in seconds, and the execution of the said attack comes off as both fluid and flawless. These blades can see upgrades in strength as well, opening up new combos and possibilities for attack, keeping the combat fresh and relevant throughout. A secondary weapon can also be obtained such as a hammer or claws, offering the player some new battle techniques that can be used for much more powerful enemies. Some weapons (such as the hammer) will take a tradeoff of speed for extra power, while others rely on Death’s own agility to properly utilize. It’s a well thought out arsenal for our dark hero, and the Gamepad’s screen compliments the experience by adding in convenience as a nice bonus. 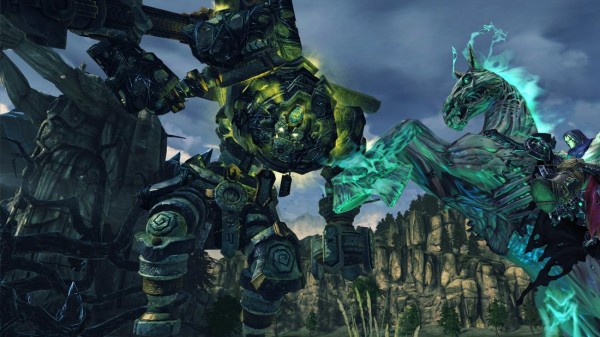 The Wii U’s Gamepad acts as your hub for Darksiders II. In-game menus, inventory systems, and maps can all be accessed with a simple tap, and changing out attires has never been easier. As an example – say you find a new set of armor. Instead of flipping through a convoluted menu, the player simply presses the “Inventory” selection and taps on a specific piece of armor that they desire. Before the selection, you can see the stats and strengths of the soon-to-be equipped item, where it can then be applied without even stopping the action. I know looking down at the map on the Gamepad might seem minor as well, but I must say I was nothing short of impressed with how well the touchscreen works while selecting a locale to view – and again, not interrupting the main game on the television while doing so is another major benefit of this version.

As fans of the first game know, this series of sorts (let’s hope there is another sequel) boasts a good number of RPG elements to give a bit of power to the player. As I mentioned, Death’s weapons can be upgraded and swapped out at will, allowing the player to have a hefty variety of customization options. As the minions of hell are torn apart, Death will also start to gain experience points that can be used to level up his many abilities. Two stat trees grant this protagonist extra power in combat (Harbinger), or let him rise the dead to fight alongside him during crowded bouts (Necromancer). As the game progresses, these abilities become more advanced and do a great job of delivering a nice change of pace.

With all of that, you would think Darksiders II would be the perfect game. Yes, it’s good, but the actual quests hold it back from true greatness. A good portion of the main questline is made up of fetch quests. I like the occasional fetch quest in my action titles, but this game seems to overuse the concept entirely. You just beat a deep dungeon, took on a epic boss, and came out the victor. The item you were seeking was obtained. What is your reward? “Now go find this item”. Now, this sort of works with the plot and there are some interesting side missions to partake in while completing the main narrative, but I can’t help but feel that some of these quests were just used as padding to make use of a well thought out boss battle. Sure, the reward is still there, but it never is truly satisfying until those credits roll at the end.

The game also seems to lose focus as it progresses on, stamping in a shooter portion that was probably inserted to deliver some change, but only comes across as an awkward and frustrating chore that doesn’t fit into the core experience. I know, it’s not just Darksiders II that does this. Remember those fond memories of riding the rocket in Bayonetta or taking down the Starship Destroyer in The Force Unleashed? Yeah, neither do we.

Visuals and Audio
The scope of the many environments within Darksiders II are truly something to behold. I had many occasions during hectic events where I still had to stop and take in the beauty that Vigil Games offer up in this installment, as each location is large and gorgeous, pushing the Wii U up to it’s current competition easily and allowing the player to get a full atmospheric grip on their surroundings. A lot can also be said about the character/enemy models within the game. The style may seem a bit cartoon-ish due to the dark events that are taking place in the plot, but Darksiders II uses that aesthetic to it’s own advantage, making the player feel as if they are controlling Death in a living graphic novel – full of robust colors and textures that are sure to please the eye. 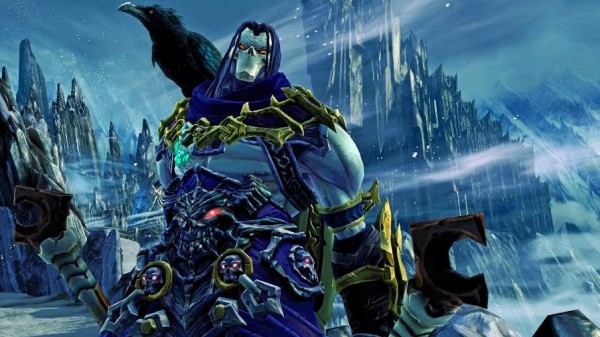 The soundtrack of this sequel also offers a lot, providing melodic, peaceful, and sometimes haunting tunes that give the main game a beautiful backdrop. Michael Wincott’s performance of Death is also exceptional, as he adds a layer of emotion to the otherwise fearful deity, making his struggle feel somewhat human. As mentioned, the other personalities of the game are also on key, which is mainly due to their own voicework that allow this cast to come out as the over-the-top personas that the portray.

Overall
Darksiders II is an all-out epic that deserves a lot more credit than what it received earlier this year, as it truly pushes the boundaries of what the action genre is all about. This version features some clever usage of the Gamepad that future titles such as Bayonetta 2 (and dare I say even Zelda) need to take note of, while delivering the same exciting experience we seen on consoles earlier this year – ending in one solid, if not still slightly flawed package as a whole. While THQ’s own future might seem grim, knowing that this fine swan song is available on a Nintendo console is quite nice, and those who have yet to see Death’s engrossing journey should definitely consider this ultimately more convenient option.