Overview
There is a small elite club in the video game world. In an age where video game franchises come and go, a franchise that has survived for over two decades is a rare sight to behold. The Darius series started in 1986 with the game Darius for the arcade. The formula is simple and has not changed much over the years. But for the first time, the Darius series has reached a touch screen platform in the form of DARIUSBURST SP. This major change in platforms brings along some big changes to the control scheme of the game and a $10.99 USD price tag to boot. Does DARIUSBURST SP live up to its predecessors? Does it justify its hefty price tag?

Visuals
DARIUSBURST SP is mostly a great looking game. Enemies are colourful and focus on a fish and crustacean theme, ranging from what looks like flying Master Chief helmets of Halo fame to robotic seahorses. The boss battles deserve a special note. They take the design ideas of the cannon fodder type enemies and turn them into something menacing and unique. The backgrounds strike a good balance between interesting, but not eye catching enough to distract from the action in the foreground. The one big detractor to the visuals is the player ships. Compared to the enemies, they look pixelated and messy. DARIUSBURST SP is based on the PSP game DARIUSBURST from 2009. 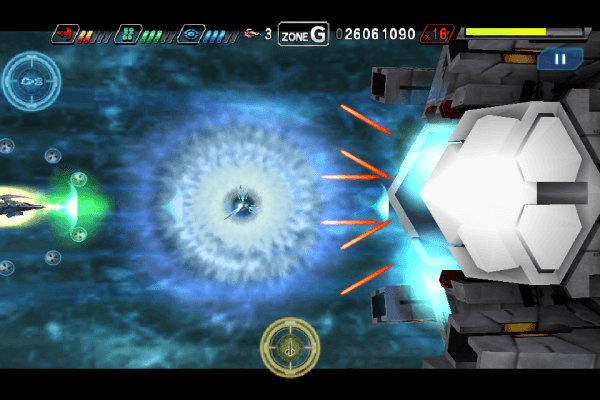 The visuals seem to have gone through an upgrade since its release on the PSP. Although the player ships look exactly the same from the PSP version, the enemies look like they have been improved. The game looks great on both the iPad and the iPhone sized screens, though iPad users will notice that their screen is displayed in widescreen format to stay true to the original game. The UI is minimalistic and unobtrusive. Players are free to adjust the buttons on the UI to their preference. I wish more games would do this as some times buttons get in the way of players preferred control scheme. This method allows a near zero chance of accidentally hitting a button at an inopportune time. For the exception of the lousy looking player spaceships, DARIUSBURST SP provides well executed visuals.

Audio
The one point that sticks out the most in this game is the audio experience DARIUSBURST SP brings to the table. The first Darius series was well regarded for its avant-garde soundtrack, and thankfully DARIUSBURST SP carries on this tradition with an amazing soundtrack. The music is a frantic electronic sound, with influences ranging from rock music to jazz. The music really helps to give players a feeling of being on edge, ready to twitchily dodge the incoming stream of enemy ships and bullets. 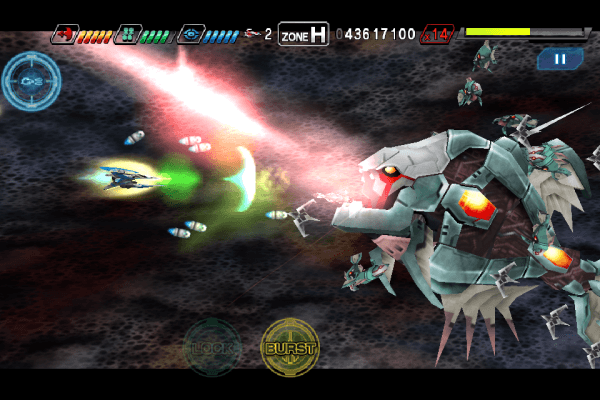 Boss fights are a special treat, as they have their own unique twist to the music that turns up the emotional intensity. The sound effects of ships exploding and guns firing are well done. Interestingly, the sound effects seamlessly meld into the music, helping to build the frantic tempo of the music. Although not a music or rhythm game, anyone playing DARIUSBURST SP with the sound muted is missing a huge part of the Darius experience.

Gameplay
DARIUSBURST SP is your traditional side scrolling shoot’em up game similar to the Gradius and the R-Type series. The whole game can be boiled down to fighting your way to epic boss battles while dodging enemy fire and suicide ships as you collect upgrades to your ship. Unique to DARIUSBURST is the inclusion of the Burst system. The Burst meter is filled by destroying enemies. With enough burst, players are able to unleash a special attack to do massive damage that is unique to the ship used. The game itself is split up into small short levels capped off by a boss battle. After a boss battle, players are given the choice of which path to take similar to Star Fox 64’s path system.

Like any good game that finds its roots in the arcade, scores are tallied at the end of the game with a high score list. There is very little in regards to a storyline for the exception of a small blurb at the end level of the game that does not seem to change depending on the route you choose in the game. There are three modes offered in the game. Original mode is self-explanatory and SP mode provides a remixed version of Original Mode, changing up enemy patterns and boss battles. Both these modes follow the Star fox 64 path system. On completion of either mode, Mission mode is unlocked. Mission Mode provides one life and pits players against a variety of challenges. 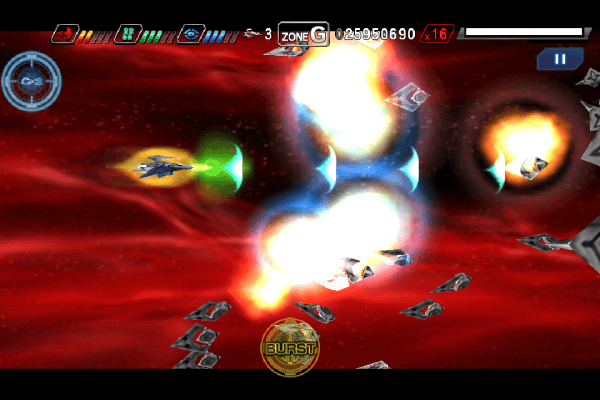 Two ships are available for play right away with two more available for unlock. Additionally, the game has a View mode that allows players to view the models of enemies and the short cut scenes at the end of missions. These are unlocked you play the game more. DARIUSBURST SP provides a challenge to newbies and experts alike. There are three difficulty levels and customization options for Original and SP mode is available to change how many lives and continues are available for use. This allows DARIUSBURST SP to be an excellent starting off point to those new to the genre while still keeping veterans entertained.

The switch from a traditional control scheme to a touch screen system can be a dangerous one. The transition can go horribly wrong in many ways. Admittedly, I was leery about how well a genre that relies on accurate and quick movement could translate onto the touch screen. DARIUSBURST SP quickly put my fears to rest. Controlling the ship is as simple as sliding your finger around the screen. This can be done anywhere on the screen as not to interfere with the view of the action.

Additionally, many UI movements can be shuffled around in the options screen so you can keep the area where you like to control the game clear. This allows the buttons for Burst mode and automatic fire to be easily pressed, while still being out of the way.  Although the ability to move the UI around is not nearly as important on the iPad, on the iPhone this is a god send. I am notoriously bad at the side scrolling shoot’em up genre, but I found I quickly shook off my reputation for failure thanks to the touch screen controls. The ships respond quickly and accurately input and controlling your ship feels completely natural.

Overall
Without a doubt, DARIUSBURST SP is a great game. The visuals are tight and the soundtrack is second to none. However, there is a big question hanging above the game. Is DARIUSBURST SP $10.99 USD good? Considering most big titles for major game developers rarely crack the $10 USD mark, DARIUSBURST SP can be a bit of a hard sell. There is a good amount of replay value to the game due to the arcade style nature of the game. However, the caveat is that the replay value comes exclusively from beating your previous high scores. This may not be enough for some players to justify the high price tag. If you are a huge side scrolling shoot’em up fan or you are looking to make one big splurge purchase on a top notch game with a tried, tested, and true reputation, then buy DARIUSBURST SP right now. But if the sticker shock is a bit too much, then put DARIUSBURST SP on your must buy when on sale list. You will not regret it.