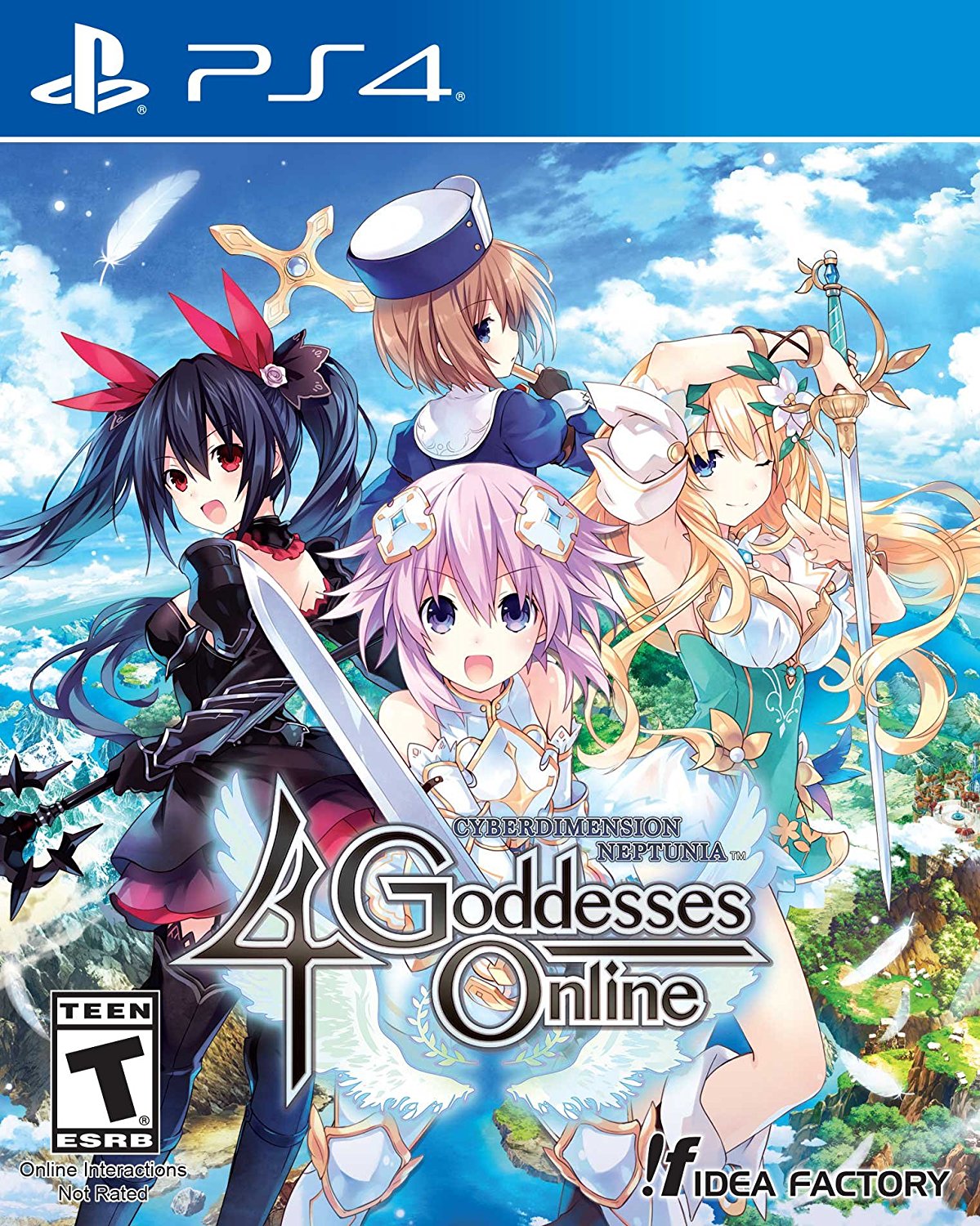 The Neptunia series has really blossomed since originally being released as a standard RPG on the PlayStation 3 many years ago. Since then it has seen numerous mainline titles that have been remade with enhancements that were added in later titles and a large number of spinoff games that have resided on the PlayStation Vita with the genre of these spin-offs ranging from strategy to idol managing sims. With the release of Cyberdimension Neptunia: 4 Goddesses Online we see the series take a bit of a new step as not only is this the first spin-off to arrive on a home console it also happens to be the first entry to make the move to Unreal Engine 4.

A unique element about this game is the fact that while the game continues to take place in the world of Gamindustri with the four CPU Goddesses, Neptune, Noire, Blanc, and Vert taking the main roles as the leaders of their nations, these four aren’t about to be venturing through dungeons in their real lives. Instead the four of them have been invited to beta test a brand new version of Vert’s favorite MMO, 4 Goddesses Online. With the girls choosing to play together, they have stepped into some new roles with some outlandish choices being made, such as Blanc being a priest, Vert being a sword wielding enchanter, and Noire playing as a Black Knight with a spear as Neptune steps into a standard Paladin style role.

Playing as their perfectly recreated avatars, these four are introduced to the world of Alsgard by the guardian spirit named Bouquet who informs them how the world came to be and inform them that they are the chosen ones who must help restore power to the Tree of Life by gathering four Sacred Treasures and summon the four goddesses back to the world to put a stop to the revival of the Demon King Jester who had previously challenged the goddesses to the point that they could no longer freely enjoy the world they created.

Although the stakes might not seem very high when you consider the fact that the game takes place inside of an MMO rather than the actual world, there is still a fairly interesting plot to go alogn with Cyberdimension Neptunia: 4 Goddesses Online. The storyline is still fairly harmless in nature, though there are some serious moments here and there, and if you happen to love the comedic stylings of the series then you will be pleased to hear that it all returns with a flourish. The fourth wall breaking jokes are even more abundant considering the “game within a game” nature of the story and the clear parallels the game draws with certain other series involving MMOs. 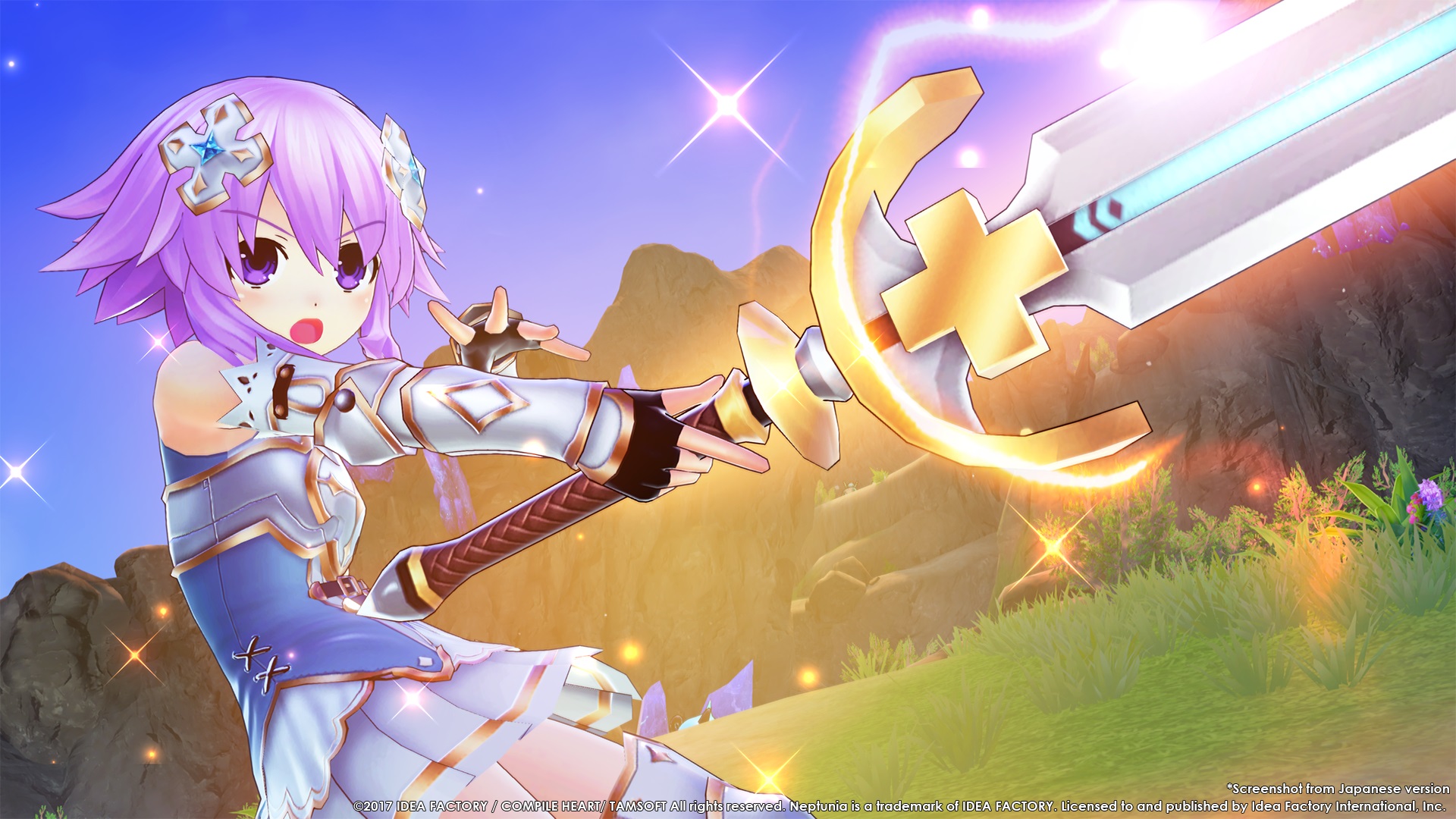 This light hearted comedy plays a major role in keeping things interesting as the characters continue to take shots at one another and the world they are exploring. There is a bit of something for everyone when it comes to the comedy on offer here and don’t worry, even the CPU Candidates get plenty of time to shine. Even though the story really doesn’t delve too deeply or offer any major developments for our familiar cast of characters, Cyberdimension Neptunia: 4 Goddesses Online is a nice and light refresher between many of the darker games we see released every month.

Being a spin-off game, Cyberdimension Neptunia: 4 Goddesses Online focuses on being an action RPG more than anything else. Players will freely battle in an open dungeon where all four of their party members will make use of skills and attack as they wish, or at least depending on your battle plans, while enemies follow the same patterns. The game features a standard MMO style of user interface with players being able to use skills from a skillbar, keep an eye on your party’s health and MP on the right, and even a little chat window on the right that shows off various details and in-game character chatter. 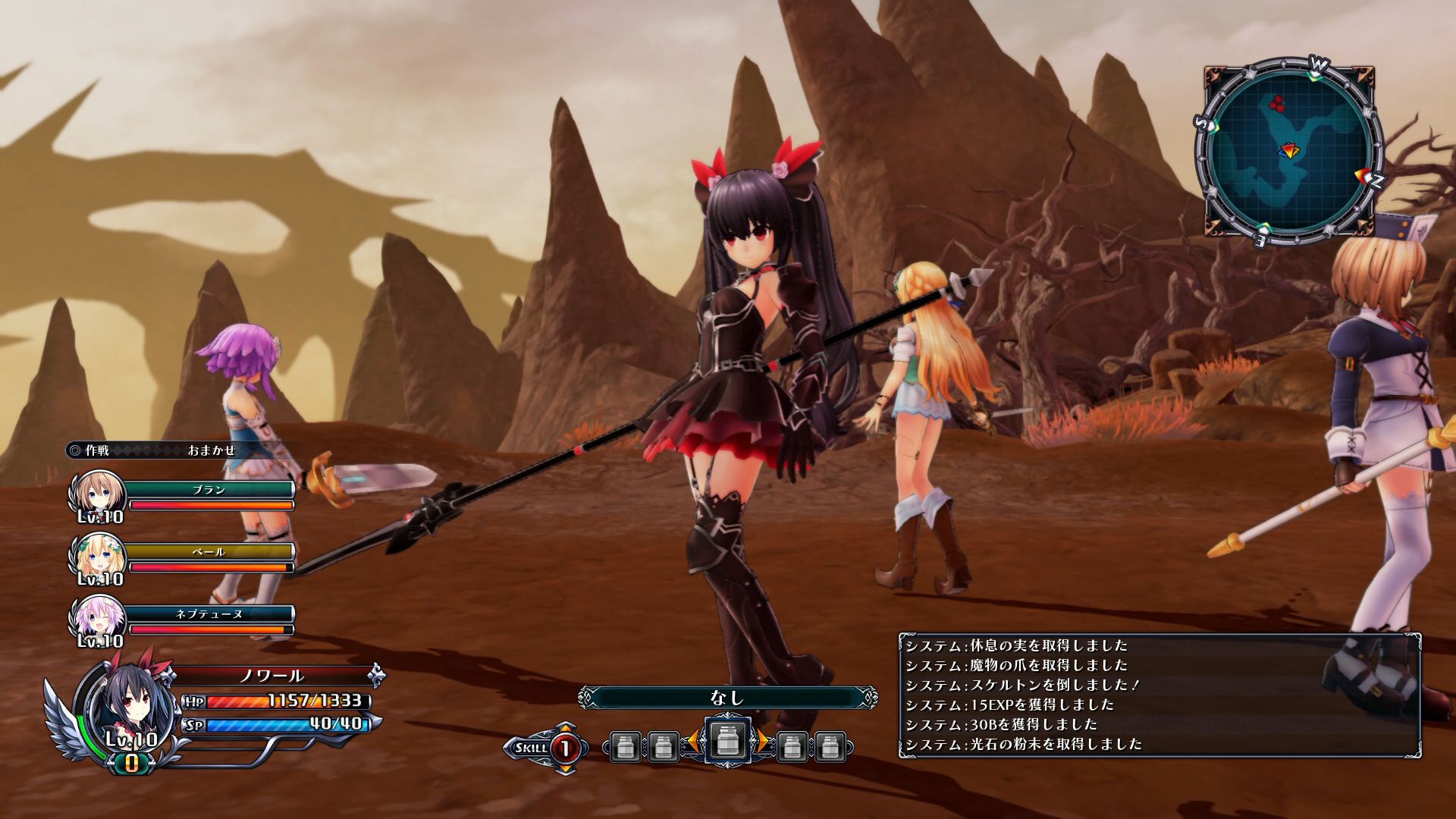 Players will find that there are various mechanics and systems that will need to be used to make the most of the system. This includes blocking and parrying enemy blows to leave them open for retaliation and making use of the various weapons and armor upgrades that are made available through the title. To be fair, most of these mechanics should be extremely familiar for fans of action RPGs, especially if you’ve played the games based off the one that Cyberdimension Neptunia: 4 Goddesses Online takes so many shots at.

It is worth noting that the game’s lock on feature can be quite iffy at times and this is partially due to the weightless feel of the combat system. While attacking locked on enemies with skills or even standard combo attacks you will often find yourself leaping past a foe and having to quickly reorient yourself to keep the flow of battle moving smoothly. This lack of impact can lead to some lackluster moments that should feel more intense but this streamlined combat system will allow players to ease into the game without having to worry about mastering anything fancy. 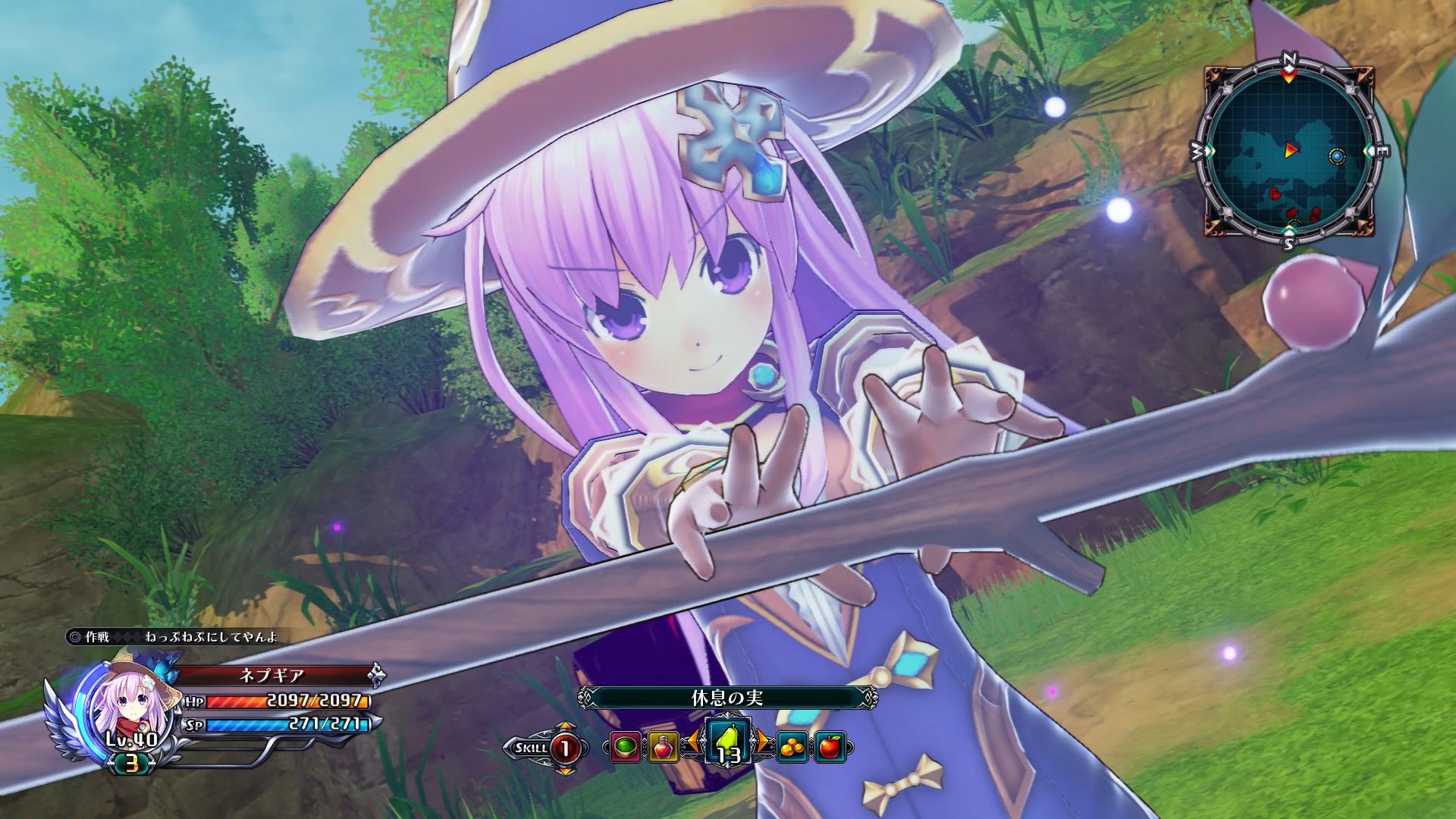 While the combat system has been reworked and exploring dungeons is different this time around, the actual town “exploration” is still handled the same way. This means that when you return to town you will instead be presented with a picture hub populated by chibi NPCs that can be talked to to trigger various events, learn little tidbits, or simply hear a joke or two. This hub offers various shops to upgrade characters as well as the Guild where you can take on side quests to earn extra rewards for completing tasks that, for the most part, you’ll be doing anyways.

If you feel like taking on some multiplayer action there is a Bulletin Board that allows players to jump into games online where they can play with others in a party though don’t expect to find too many people online regularly, even if this method gives players a chance to earn special materials and experience through alternative methods outside of the standard grinding.

The transition from the previous game engine to Unreal Engine 4 is an immediate improvement in most regards when it comes to Cyberdimension Neptunia: 4 Goddesses Online. This is one of the best looking games in the series as nearly every aspect of the game has been redesigned to fit in with the newly improved graphics engine. The maps you explore have undergone a noticeable improvement and even the enemies, although still familiar, are more detailed than they previously were. Combine this with some of the flashy attacks available for the characters and the newly detailed character designs and you have an impressive looking title. 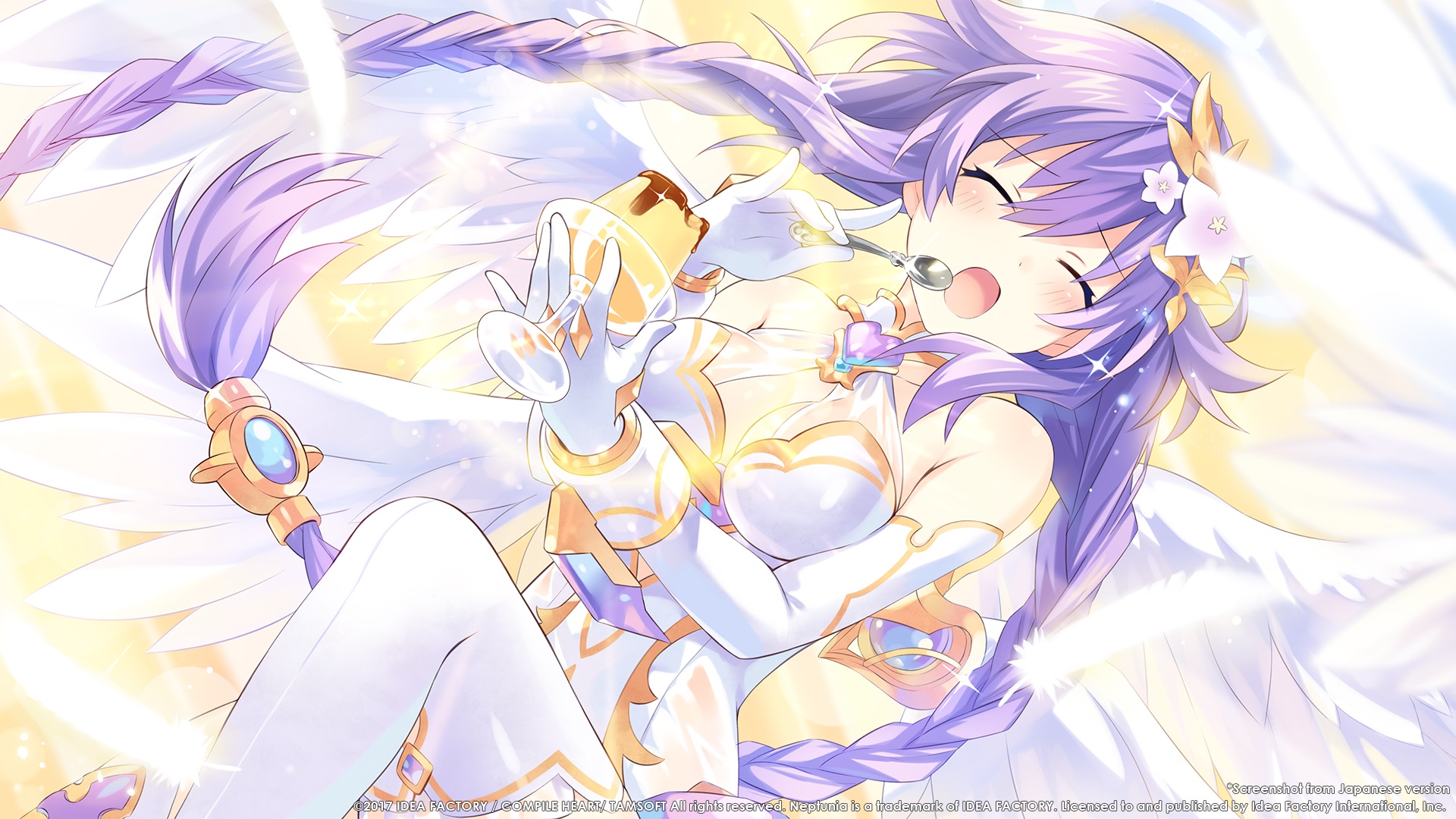 That being said, it is a bit disappointing to see that the visual novel scenes have taken a bit of a hit this game. Rather than make small motions to fit their dialogue the character portraits are now completely stiff in nature outside of moving different directions. Considering how well these animated portraits helped add a bit of extra impact to these scenes their removal is unfortunate.

The soundtrack for this entry in the franchise has seen a number of new fantasy tunes added into the standard playlist though don’t expect anything too amazing outside of the catchy opening theme. It is also worth noting that while a number of characters have seen their English voice actors return to reprise their roles, Noire has been given a new voice actress for this entry, though she does fit the role well enough that most fans will be alright with the changeup.

Cyberdimension Neptunia: 4 Goddesses Online is a breath of fresh air that offers a light experience that the series is known for with enough little changes to make this spin-off worthwhile. With an easy to understand combat system that lacks impact and a storyline that is filled with plenty of comedic moments while still delivering a solid enough outing for our favorite CPUs, fans of the franchise will be pleased with what is on offer here, though newcomers might want to start with a mainline entry before delving into this action RPG.

By offering a simple but fast paced combat system and a storyline that manages to offer plenty of humor alongside delivering a solid enough experience, Cyberdimension Neptunia: 4 Goddesses Online may not be for newcomers but will please longtime fans of the franchise.
8