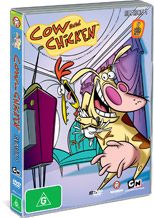 Growing up as a child in the 1990’s, I have fond nostalgic memories of both morning and afternoon cartoons. While Japanese imports were usually on the menu for breakfast, my afternoon diet consisted of a healthy dose of American surrealist-style cartoons, usually aired on Cartoon Network. Animation variety shows like The What a Cartoon! Show, introduced me to a range of new cartoons that presented a wacky and outrageous style of animation I had grown to love from watching series like Ren and Stimpy. One of these shows I had the fortune of being introduced to, was David Feiss’ Cow and Chicken. It’s always a strange moment being transported back into the shoes of my younger self. Firstly, the shoes tend to be really small and hurt my feet, and secondly former tastes tend to not stand the test of time. 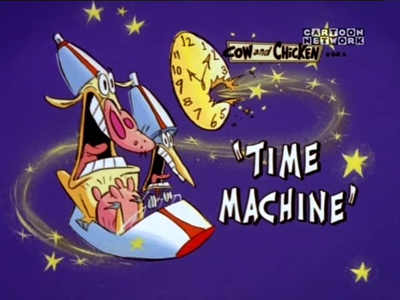 Mama had a Chicken, Mama had a Cow, Dad was proud, He didn’t care how. The first line from the series theme song pretty much sums up the plot of the show. Cow and Chicken are brother and sister, who were brought onto this world by two human parents, who for some reason are represented by two pairs of gendered legs. The back-story to how two pairs of human legs spawned not only a chicken (the chicken came first in this situation) but also a cow, is never addressed apart from the former mentioned line “he didn’t care how”. If we as an audience all join Dad in his blissful ignorance of not caring how, then the show is much easier to swallow. The series revolves around Cow and Chicken and their bizarre adventures, which are most often or not instigated by The Red Guy.

There series doesn’t have an over-arching narrative running through. Consistencies emerge such as Cow and Chicken being students at the same school and being close in age. It’s revealed in this season that Cow is 6 years old, and that Chicken is older, so both are rather young to be going on such wacky adventures if you ask me. Some inconsistencies include The Red Guy who has multiple names and occupations, all of which seem to hinder the goals of Cow and Chicken. The show is broken down into small segments of 8 minute shorts, with the final short in the episode being a unrelated to Cow and Chicken, called I Am Weasel. The episodes never extend stories across segments, apart from one story that spans across two Cow and Chicken segments titled The Ugliest Weenie. 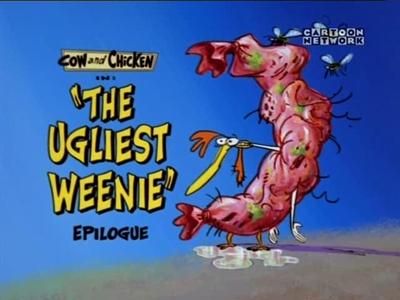 The two most obvious characters are clearly Cow and Chicken. Firstly, Cow is a cow. She is around 6 years old, has a starting weight of 600 pounds, an udder. You know, a Cow. In terms of her personality, Cow is rather slow. Chicken tends to mock her for her lack of maturity and intellectuality, as she is often mostly concerned with playing with dolls. She also has an alter ego, Supercow. Cow puts on her purple onesie and cape and flies of to the rescue (mostly to rescue Chicken), spouting Spanish and she flies. Chicken is the older brother of Cow. He is often mean to his younger sister, as well as his friends and family, and is often very selfish in his actions. Despite this he still has a sense of morality and often attempts to save his sister from danger like a good older brother. The Red Guy is another major character. As I said, he serves the purpose of instigator, which is probably fitting seeing as he is a pantless devil. Many of the jokes, such as his numerous names, revolve around the fact that he doesn’t wear pants ever, which he seems to be rather proud of. Minor characters include Chickens friends Flem and Earl, as well as the parents and teacher of Cow and Chicken. These characters tend to just be background and not really add much to the plot.

Considering that Cow and Chicken season one also features the segment I Am Weasel it is worth mentioning the main characters from this as well. The series revolves around I R Baboon who is a moronic red-butted baboon who is constantly trying to undermine and humiliate Weasel of whom he is jealous of. This segment doesn’t often feature reoccurring minor characters and tends to be very short on plot due to its lack of airtime to develop any real character development. It tends to get a bit repetitive. 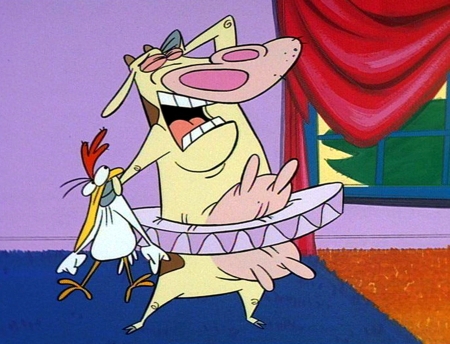 I feel that the animation is attempting to emulate the extreme surreal nature of cartoons such as Red and Stimpy but just falls short of the mark. There is a lot of emphasis on over the top gestures, which at times push the characters into odd off-model positions that tend to not really sit well. Similarly, backgrounds tend to be very warped in their perspective and lack any extreme detail, which seemed to be a trend that spanned across the 1990’s in animations. These aren’t necessarily bad things for everyday audiences. As a child I really enjoyed the hyperbolic expressions of the characters, but sadly this fondness hasn’t aged well and I just found it a little messy. There also tends to be a lot of visual gags focused on the naked rear end or misspelling words, making the program a little less visually sophisticated than other Cartoon Network series. 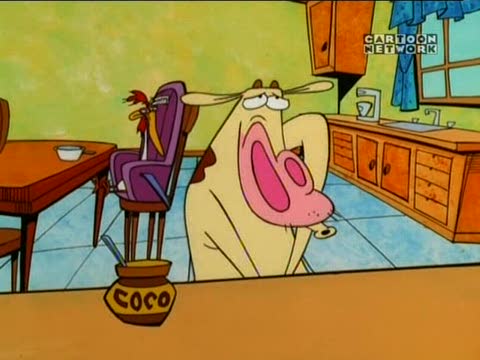 To match the bizarre visual nature of Cow and Chicken, has some pretty off the wall voice over acting. The primary actor in Cow and Chicken is none other than Charlie Adler who did a whole bunch of stuff in the 90’s including Aaah!!! Real Monsters, Rocko’s Modern Life and even The Smurfs. Most recently Adler has been the voice of Starscream in all three of the Transformers live action films. Alders vocal feats don’t go unnoticed in Cow and Chicken, playing the role of Cow, Chicken and The Red Guy. The range in pitches, intensity and accents is nothing short of impressive.

Cow and Chicken is not a bad show by any means, it just feels a little dated to me and is very typical of the style of animations that were coming out of America in the 90’s. The humour is a little esoteric and lacking maturity so it won’t be up everyone’s alley. The crazy animation and voice acting style might be a bit much for some, but then again there are huge fan bases that do enjoy this type of cartoon. I think it is a little unfortunate that the series is broken into three parts per episode, taking away some of the character developments that could be pushed further, in particularly the highs and lows in brotherly/sisterly affection that Cow and Chicken go through. Still, for a slice of quintessential 90’s animation, check out Cow and Chicken season one, even if only to view a short segment to test out your taste buds.