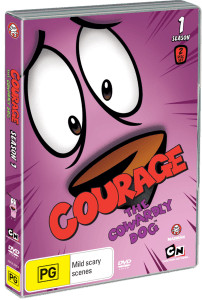 Sometimes, truly great cartoons take a lifetime to appreciate. These are the cartoons that, when seen through the eyes of an eight-year-old, seem bizarre and nonsensical (remember listening to Vengaboys’ song Boom, Boom, Boom and thinking people just wanted to hang out in a room together?), but as we grow up, something in our brain clicks and we say “Ahhh…so that’s what it all meant!”

I’ll admit it: as a child, I found Courage the Cowardly Dog lame, confusing, pointless, and most of the time, it was just plain creepy. However, after life walloped me with a hefty dose of growing up, and then privileged me with a love of cinema, television, and animation, I found that I viewed Courage’s adventures through a completely different lens the second time around.

Courage is a small, fuchsia dog that was abandoned as a puppy. He was found and adopted by Muriel, a lovely elderly woman that lives with her husband Eustace on a farm in the middle of Nowhere – quite literally. Courage is, despite his name, absolutely terrified of everything and everyone; the smallest movement or slightly paranormal event can make his eyes pop out of his head and send him shaking. However, this doesn’t serve well for him because Nowhere is plagued with strange happenings: monsters, aliens, demons, insects, and things that go bump in the night. When Muriel and Eustace are in danger, it’s often up to Courage to muster up his…well, courage and find some way to save the day. 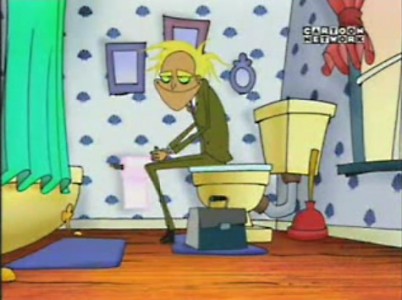 The aptly-named Freaky Fred…so, so, so freaky.

As per all of Cartoon Network’s classics, Courage the Cowardly Dog works in episodes of about 8-10 minutes. Each episode houses its own little storyline, and is designed to exist as a standalone segment so they can be broadcast at anytime and will still make sense. The shorts are varied in quality, but as this is the first season of Courage there is a clear creative progression: I found the further I watched into the season, the more overwhelmed I was at how intelligent the series was with its intertextuality and psychological implications that many children wouldn’t understand at the time. One notable episode was Freaky Fred, where Muriel’s nephew Fred visits their home. Fred has a fetishistic obsession with shaving hair (although children would just think it’s a regular ol’ obsession), and tries to shave Courage’s fur. The narrative was told in a voice-over, and was so reminiscent of Edgar Allan Poe’s poem The Raven that I actually got chills down my spine. Here, Dilworth really proves that children’s shows can be for adults as well, and, once he finds his stride, the series offers so much density in regards to knowledge and parodies.

The narrative, of course, centres itself around black humour – which, I believe, I didn’t know existed until I was in my teens – and it takes a comedic approach to otherwise dire situations. I do remember that as a child, however, the black humour didn’t register and the show was just genuinely terrifying. While Dilworth features wonderful moments of randomness just to keep the kids laughing, for children that don’t register the difference between black humour and horror it can be a frightening and daunting experience to watch Courage the Cowardly Dog. Upon revisiting it as an adult though, the true genius of the series clicked in my brain – I am glad I had the experience of watching the show as a child and then the chance to watch it a decade later and appreciate it fully.

Cartoon Network always has featured as few main characters as possible in order to fill up their limited time with stories about the protagonist. Courage the Cowardly Dog is no different: Courage, Muriel, and Eustace are the only consistent characters throughout the series – although, true to form, Dilworth has thrown in a few recurring baddies just for good measure, such as Katz and Dr Le Quack. 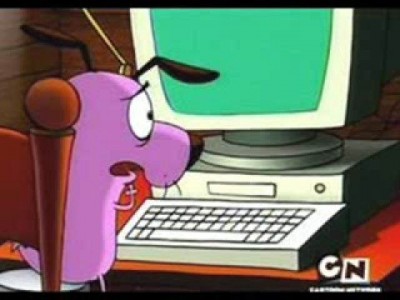 Sometimes you have to refer to your computer for help. I’m betting he wasn’t Wikipedia-ing anything.

Courage himself is the one thing that keeps the story going. He’s the small, bright coloured dog who’s adorable yet cowardly, and naïve yet houses an overactive imagination. Courage often curls up in a ball on Muriel’s lap, and is always willing to help her – but he’ll probably get terrified every step of the way. He’s the sweetest pet and even when he gets scared all the time – a less than desirable trait in a dog, I would imagine – he is still so likeable for his big heart.

As the central figure, I’d have to say he truly is one of a kind, and that’s his core appeal. He’s always going to save the day, but how scared he gets while doing it is a completely different story. In other words, Courage is the quintessential metaphor for the subtle lesson addressed to every member of the audience: no matter how terrified you are, you can still find the courage within yourself to do what’s moral, what’s right, or whatever it takes to protect the people you love.

Muriel Bagge is a package deal with Courage: a grandmotherly figure that cleans, cooks, takes care of her family, and is never judgmental. She is always ready to help Courage or Eustace out, she scolds in a loving and polite manner, and she is so stereotypical that she embodies every single grandma figure in the history of cliches. If Courage is (wo)man’s best friend, then Muriel is a dog’s best owner. Whilst she is a constant character, she’s one that nobody ever tires of because she treats our favourite fuchsia dog so well and is so morally unwavering. With that being said, Eustace is Muriel’s antithesis: a mean old man who is constantly mocking Courage, and is so lazy and cruel that sometimes you just wish Courage would bite him in the butt. He occasionally has his redeeming qualities, but for the most part he’s the one that balances out the loveliness of the Bagge home.

The recurring characters are a delight to see, and in fact they give the show an overall consistency that otherwise would have been lacking. All of the villains are quirkily evil, but it’s because of that trait that their presence is so welcomed throughout the series. Dr Le Quack has to be the best one though: he uses his hypnotic skills for his own personal gain, and is a comedic mirror of the greed and exploitation often found in the world.

While the shows from the classic Cartoon Network period all seem to maintain a sort of stylistic cohesiveness about them, Courage the Cowardly Dog stands out. The show is slightly darker than the others in terms of colours and animation (although Courage’s bright pink fur helps to balance that out) and Nowhere as a setting is as depressing as it sounds. In fact, whenever there were flashes of colour in flowers or in the sky, it was such a welcome relief to my eyes that I paused the show to enjoy the variation in palette. I do feel that because the show was a black comedy, the animators felt more free to express themselves visually – and it was a welcome sight from other cartoons like Johnny Bravo and Cow and Chicken where everything is so consistent it’s boring. 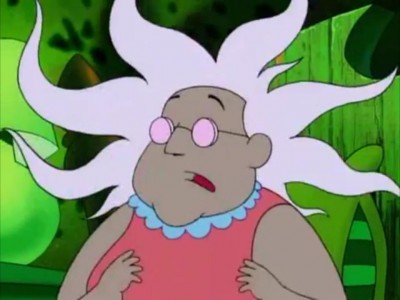 One of the best features of the animation occurs whenever Courage is trying to warn Muriel or Eustace of something. Of course, he can’t verbally communicate with them; instead, he creatively metamorphoses into an impersonation of whatever it is that’s threatening them. The animators went wild with these impersonations, and they pulled it off spectacularly: each animation is a great way of communicating the show as a visual element rather than a show that is about constantly talking.

Audio-wise, the show has excellent voice-acting and SFX, and an average soundtrack. Eustace and Muriel’s voices couldn’t have been picked better – it’s as if their voices were picked first and the animation drawn to suit them. Courage’s voice is sometimes odd, but for the most part it suits the cowardly nature in him. The most iconic lines of Courage’s – “What do I do? What do I do?!” and “Either something’s up, or my name is [insert some ridiculous name here]…and it’s not!” – wouldn’t have been the same without Marty Grabstein’s great interpretation of Courage’s tone, pitch, and accent.

The SFX work synonymously with the rest of the show, and always contribute to the atmosphere of the segment. However, the soundtrack was a little bit of a hit-and-miss. While the music was often very well-orchestrated, sometimes it felt a bit choppy. Even as the opening credits cut out, it’s very obvious that the cut had been done mid-word and it sounds too amateur for the rest of the series. Of course though, a show like Courage the Cowardly Dog can’t be perfect, and it is better that it fell on soundtrack than anything else.

The DVD came with no extras, which is a major disappointment. I do know that Courage the Cowardly Dog Season Two comes with the original pilot from the What a Cartoon! Compilation, but as far as special features go there was absolutely nothing.

Courage the Cowardly Dog is one of the most intelligent and hilarious cartoons that I have seen for a long time. When I first received the DVD, I wasn’t sure if I was going to have to force myself to watch the series one gruelling episode at a time. However, I was pleasantly surprised and have discovered that some shows deserve a second chance (and after a decade, I think it’s a warranted second-go) to make their way back into your heart. Either this show is great and I loved it, or my name is Princess Consuela Banana-Hammock…and it’s not.

I give Courage the Cowardly Dog