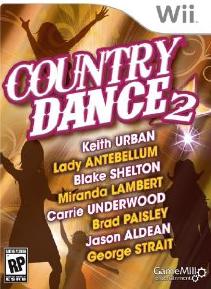 Overview
If one thing can be said about the Nintendo Wii, it’s that developers have had great success in bringing new life to the dance genre. Ubisoft have brought in huge numbers with the Just Dance series, and many other companies have also seen great success by just copying that simple formula in products of their own. One of these said companies is GameMill, who found a hit in Country Dance last year by simply offering up modern country music instead of the usual pop offerings. Just one year later, Country Dance 2 has hit the Nintendo Wii and includes new modes, music, and dance moves to master for those who crave all things country. How does this sequel fare? Here is my review for Country Dance 2. 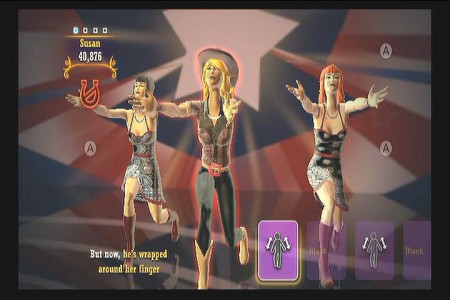 Gameplay
If your expecting Country Dance 2 to revolutionize everything we know about the genre, you might go in a bit disappointed as this title plays exactly like any other dancing game on the Wii. Using one WiiMote, players must copy techniques performed by an on-screen persona and try to rack up as high of score as possible. If the avatar on screen moves their hands up, down, spins, ect., it’s then your job to execute the same move accurately. Now, over the years the Just Dance series has added a ton of new mechanics into this formula, but Country Dance 2 offers a more raw experience as simply dancing along is all that is needed of the player throughout the entire game. 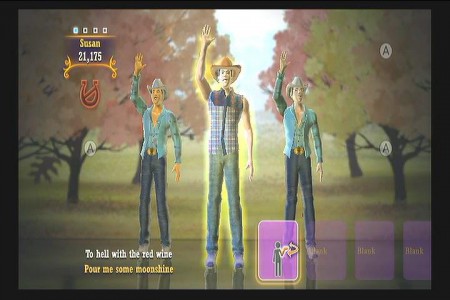 Even though we didn’t see more innovation this time around, I can easily say that matching the moves can be mastered in just a few minutes time as I never once had a problem in getting GREAT or GOOD while following along with the western-styled gestures provided. The WiiMote control is very responsive and whether you love country music or not, it’s really hard not to enjoy yourself while mocking every wacky movement displayed. As great as the concept still is, Country Dance 2 is a bit too easy for it’s own good. You see, the controller picks up every bit of movement you make and while that is a merit in itself, the game really can’t tell one gesture from the next. For example, there was one tune that wanted me to pop my arms up quickly, raise them in the air, and then put my hands on my hips (I’m very thankful no one was filming). Instead of doing all of that, I just waggled the controller and still got GREAT or GOOD for each gesture I performed. Does this take away from wanting to dance along? Not at all. It does however make dancing correctly a mere option rather than the mandatory event it should be. This is a bit of a flaw and some hardcore dance fanatics might even consider it gamebreaking, but one could also see this as a plus as even a toddler could easily play along and get rewarded for their meager efforts in the process.

There are a few modes to be found aside from the standard “Play Now” Function. The first is pretty much standard fare, letting the player select a set number of rounds and dance to a specific track with an increased level of difficulty. Due to the simplicity of the control scheme, I didn’t find much difference between the normal game and this harder mode but perfection is certainly needed to succeed either way, which in turn gives a bit more incentive for the hardcore fans of the genre to stick around. The next mode up is “Freeze” mode. Much like it sounds, this side-game takes each track and randomly cuts the music, with the player having to literally freeze in place for a brief period of time. This addition was actually my personal favorite of everything offered as while it has a simple premise, the random timing of the freezes made for some frantic gameplay that definitely kept the whole experience much more entertaining overall. 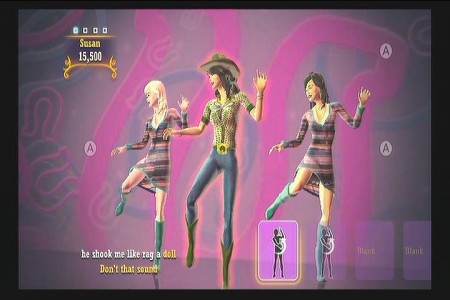 Due to the motion control, there really isn’t any way around getting some kind of workout while you dance along to the songs in the game. High Voltage took that concept a step further and added in an Exercise mode into this sequel. While you dance up a sweat, a calorie counter can be found located up at the top and as motions are detected, the game literally counts how many calories you burn. I don’t know how accurate this is, but I do know the soreness one can feel after dancing non-stop for ten tracks so there really isn’t any doubt that Country Dance 2 definitely can be quite a workout.

Hands down, the true meat of Country Dance 2 comes in it’s hefty track-list. Country music fans should be very happy to know that there is large variety of modern artists, including the likes of George Straight, Carrie Underwood, Brad Paisley and Lady Antebellum…just to name a few. Each one of the 30 songs provided also feature their own backdrop, performers, and scrolling lyrics for players sing and follow along with, helping every tune feel different from the next. With this motley assortment, players can also take advantage of yet another new feature to this growing series known as “Duet Dancing”, where up to four players can dance at once, with each participant getting their own unique moves to dance to. Not every track has this little addition, but the extra multiplayer support was definitely welcome to the series and gives off the same “party” vibe found in the Just Dance games.

Visuals/Audio
As far as visuals go, Country Dance 2 is a bit of a mixed bag. The varied backdrops are fully animated and add a ton of life and charm to each song, but the performers themselves look a bit out of place. Each model looks stretched and resembles something of a background character we would have seen in a Playstation 2 western game. Unless your a fan of a bright, stale purple, you may also be a bit put off by the presentation value found in all of the menus as that color is really all there is to see aside from a few stars plastered about. It’s not very welcoming or appealing to be honest and just a little more variety would have went miles to prevent the main screens from looking so generic. 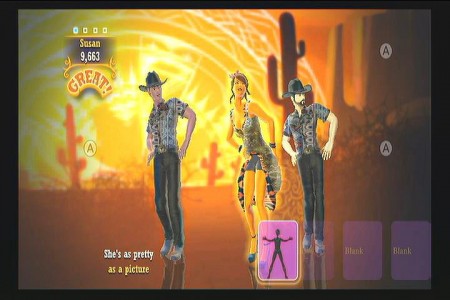 The full song list is definitely done well in this sequel. Each licensed track sounds exactly as fans would expect and are performed by all of the original artists. I have never been the biggest country music fan, but this well rounded selection provides something for everyone and stays true to each routine performed on screen. Honestly, it’s kind of hard not to start singing along with the lyrics after just a short time as these tracks are all upbeat and fun to follow along with. Other than the obvious track list that you can select songs from, there really isn’t much music to speak of except a looping, bland country beat played at the title screen.

Overall
From a technical standpoint, Country Dance 2 leaves a lot to be desired. The controls are nearly on auto-pilot and provide little challenge, the menus are bland and generic, and the performers we are supposed to dance with look a bit distorted. With that said, I feel this is how nearly all the dance titles on the Wii actually play (and look) for the most part. Yes, there are some obvious faults to this country dancing romp and it pushes no limits with innovation, but I found myself actually having fun dancing along with a genre of music I knew nothing about up until popping this disc in my Wii. That quality and the large and varied track list makes it hard not to recommend Country Dance 2 to any cowboy (or cowgirl) who are looking to just have fun dancing with their favorite western beats.