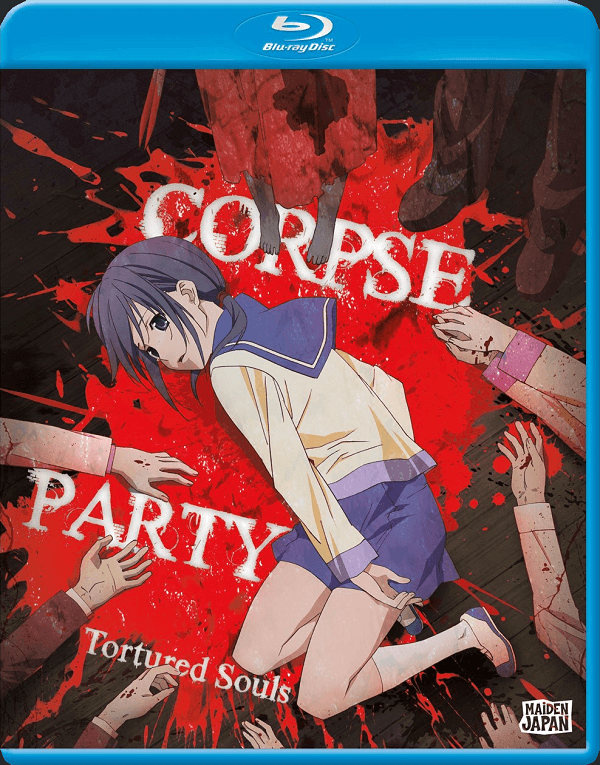 Overview
The Corpse Party series has been around for quite some time as the very first game was released back in 1996 for the PC. It wasn’t until years later when a PSP remake was released that the horror title made its appearance in the West. With multiple games developed for the series, it was only a matter of time until some form of anime adaptation was created and now Sentai Filmworks has brought that adaptation to North America. Consisting of four OVAs meant to take place during the first game, has Corpse Party: Tortured Souls transitioned into a worthwhile horror anime?

Story
After a high school festival, a group of students are telling ghost stories as a sort of, going away party for one of their friends who will be moving away. While the class representative Ayumi is telling a particularly scary story, their teacher arrives and frightens them all. Bringing with her Yuka, Satoshi’s younger sister, she tells the group to wrap things up. Before the group splits up, Ayumi suggest that they perform the “Happy Sachiko” ritual in order to ensure that they all remain friends forever. 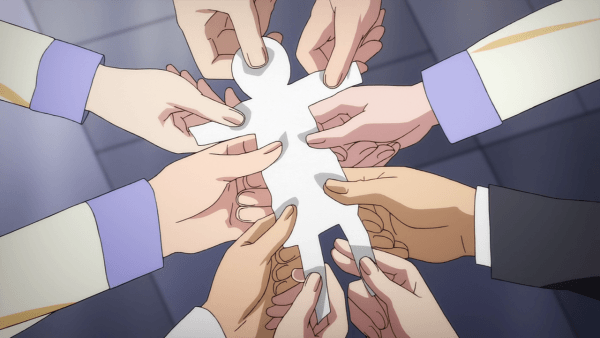 While Ayumi informs the group that something may go horribly wrong if the charm isn’t performed correctly, the group performs it anyways and, as one would expect, things almost immediately take a turn for the worse. Everyone who performed the ritual has been transported to a horrific place, one that was mentioned in an earlier ghost story, a place where a brutal and unspeakable series of murders took place, Heavenly Host Elementary school.

Despite all being together when performing the charm, the nine have almost entirely been separated and awake to find themselves in halls of the rundown school. Initially they are blissfully unaware of what is going on, that is until they begin to stumble upon corpses of other students, buckets filled with viscera, skeletons, mysterious locked doors, and gruesome ghosts of children and other apparitions. 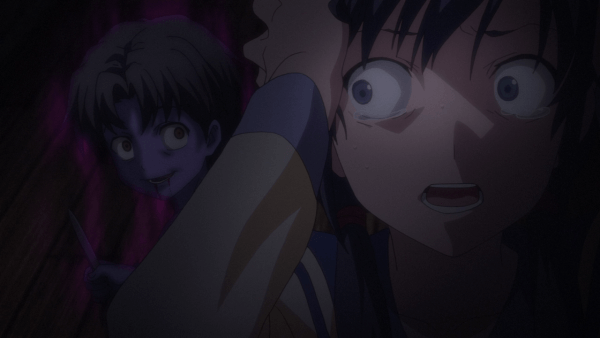 Let’s be clear here, Corpse Party: Tortured Souls is a series that is not for the faint of heart by any means. There are many anime that are mentioned when it comes to extremely graphic blood, gore, and violence but very few of them can rank up there with what Corpse Party: Tortured Souls delivers here in these four half hour episodes. Things may start out a bit mild in the first episode outside of the first, still rather horrifically portrayed death, but quickly escalate from there to the point that anyone who may be a bit squeamish should say away, but more on that in a bit.

Those familiar with the Corpse Party series of games will be familiar with the events that unfold throughout the storyline and Corpse Party: Tortured Souls does a decent enough job explaining the events of the school and how things work in Heavenly Host. Between the four children who were brutally butchered in the past, the way that people wind up in this alternate dimension, how the multi-layered dimensions of Heavenly Host work, all of these things are handled decently as the story progresses at a brisk pace, attempting to keep viewers informed and the story moving while serving up horrific violence every few minutes. 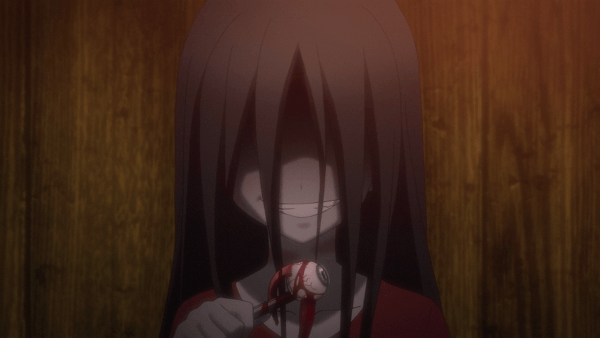 That being said, considering the game that this OVA set is adapting was originally an RPG, certain story elements are condensed far too much and many of the elements that helped expand the story, such as various collectibles and details about the characters that the story is following, aren’t really explored that much here. This means that things do end up feeling a bit rushed and even when certain characters do end up dying off, viewers will be left wondering about some of their actions.

One thing that this anime adaptation does handle well is the multi-dimensional aspect of Heavenly Host as the timelines from when we see certain characters and their locations relating to one another are used to provide a sense of dread for viewers as well as confusion for the characters. What one student may see at a point may not even have happened yet from a perspective of another. 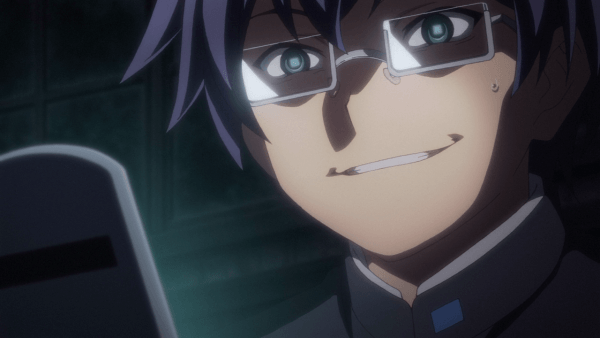 Now while Corpse Party: Tortured Souls may handle the overall story fairly well, those who haven’t played the games will find themselves a bit lost due to the way that certain events are cut down in favor of hyper violence and those who have played the games will likely take a bit of issue with how the story is handled. I say this because while this does serve as a great incentive to play the game, this adaptation follows collects a series of bad ends together rather than follow the ending fans of the series may know of. This may dissuade some viewers while encouraging others to see just how events play out in such a form, though those that do check out this series will still find a fairly interesting story and plenty of horrific scenes.

Visuals
As I was mentioning earlier, this is a series that is not for the faint of heart and while many horror anime may use atmosphere in order to try and scare viewers, Corpse Party: Tortured Souls takes that to the next level. While things may start out fairly bright and colorful, once the cast finds themselves within the halls of Heavenly Host the background art is extensively detailed, with bloody handprints, viscera and blood spatter everywhere in a wooden school building that is practically falling apart. Using titled camera angles to demonstrate when dimensions are shifted or something terrible is affecting the characters mentally is used to some degree as well to help accentuate the atmosphere. 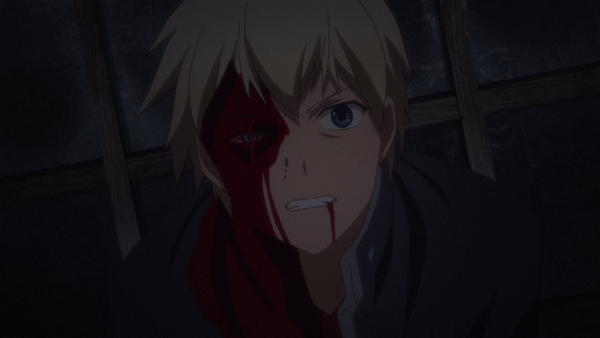 As far as the characters go, despite mostly wearing school uniforms the cast is designed in a manner that they are all easily recognizable even when they aren’t all in one piece. Now while the PSP game may have made use of off-screen effects at times to try and provide horror, this anime adaptation doesn’t really pull any punches. Viewers will watch characters be brutally murdered in a number of gruesome ways and since the ghosts of the murdered children remain in the forms that they were left in there is even a child ghost with its head sliced off from the mouth level, with all of the details below still present.

Audio
This release features the original Japanese voice track only but this is likely for the best as fans in the West have only ever heard these characters in Japanese before and since the voice actors were able to reprise their roles, they are immediately recognizable. The cast does a fantastic job making this title feel as unsettling as possible whenever something horrible happens, screams from the dying and those stuck watching are as upsetting as they can possibly be here, especially since some victims are middle-school and younger. 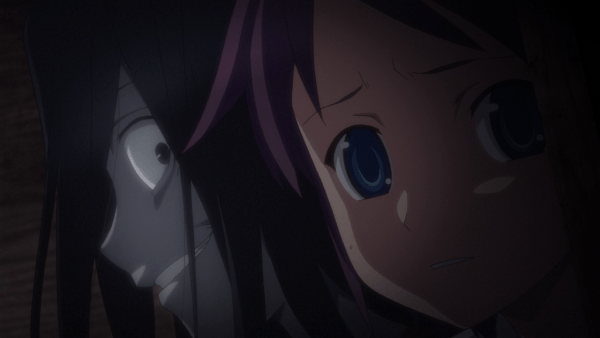 The atmospheric sound effects provided in this series really do a number on making some scenes really horrific and when accompanied by creepy sounding music made up of piano and orchestral tunes viewers will be in for a rather creepy experience. This OVA set features one opening theme “Hoshikuzu no Ring” by Asami Imai and an ending theme of “Hotaru-bi” by Yumi Hara set to simple credits.

Overall
Corpse Party: Tortured Souls may take some liberties with how it comes to an end and rushes a bit too much that causes various details and character developments to be lost in the process, but despite that, this is an OVA that delivers on being one of the most graphic anime that you can watch. With atmospheric horror, numerous unsettling sequences, and sadistic scenes, this is a horror anime through and through and one that may be a bit too much for most people, but for those willing to stomach it, Corpse Party: Tortured Souls delivers.
Capsule Computers review guidelines can be found here.