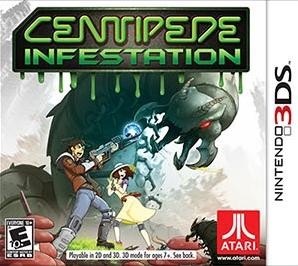 Over 31 years ago, Atari brought us the classic game of Centipede. While the property has achieved a legendary status in the world of gaming, I really feel like many have forgotten just how much of a legacy the classic bug shooter left behind as the original’s ideas still can be seen in many modern games released today. In the past few years however, Atari have been slowly rebooting their classic franchises, and it’s time for the multi-legged favorite to shine yet again on this generation’s line of platforms. Centipede: Infestation is a complete re-imagining of the arcade classic, and sets out to add in not only a substantial plot, but also a completely re-tooled yet familiar gameplay scheme that retro fanatics are sure to go “buggy” over. The old school minded WayForward were on task to deliver the goods for this reboot, so now the question remains of how well they pulled off making Centipede relevant yet again. What is the result? Here is my review for Centipede: Infestation for the Nintendo 3DS.

Story
Centipede Infestation is set in a post-apocalyptic world that is over-run by large insects and dangers around ever corner. Players take the role of Max, an orphan, a rebel, and our hero throughout this journey, who has made it his duty to protect what’s left of this wasteland while ridding the world of the buggy creatures that are causing a considerable threat to humanity. Along the way, Max runs into a sign of hope for the doomed lands by the name of Maisy. You see, Maisy has been planting gardens and restoring life wherever she digs her shovel. These brave actions must be protected, and your new goal is to ensure the safety of both Maisy and her green creations while finding out more about your rocky past.

While many reboots attempt to just tack on some light plot to add a general narrative, Centipede: Infestation’s tale stays genuinely interesting for the entire game and I even felt as if it were inspired by the likes of Star Wars and Avatar. That may be quite a bold statement, but the similarities of the characters within are there, and Infestation those ideas and makes them original in one easy to follow story.

Gameplay
When it comes to actually playing Centipede: Infestation, the style would best be compared to that of a twin-stick shooter. Each level offers different objectives to perform, but the gameplay usually revolves around taking out swarms of insects and racking up a high score in the process throughout various playing fields. Players will do battle on top of buildings, in vibrant gardens, and even on moving trains, but even with all of this change of scenery, these stages still keep that classic Centipede feel, with even a large centipede emerging upon nearly every stage. 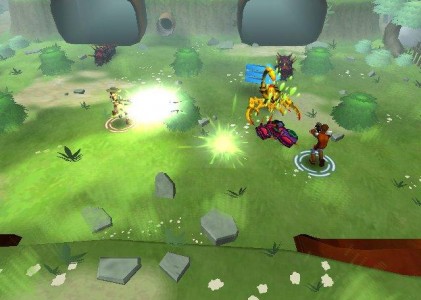 To control Max, players will look no further than the circle pad. This stick works well for movement and can quickly guide your character around the level and out of danger with no error. To shoot enemies, all four of the face buttons will need to be used. Each button shoots in the exact same way, but have Max instantly turn direction based on input. For instance, Y shoots left, A shoots right, B shoots down, and X shoots up. You can also shoot diagonally by hitting two buttons at once, which may sound like a bit of a chore, but is actually an easy task to execute. This control layout threw me off early on but after just a short time, everything instantly clicked and the brilliance of the game’s unique style took off from there. 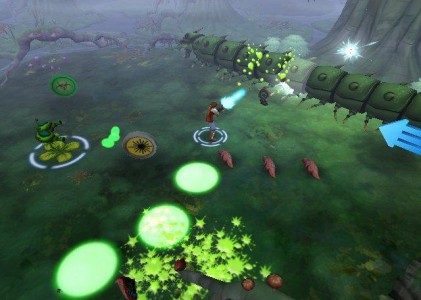 As I mentioned, most levels will have players blasting away at giant bugs. This is the main theme of the game, but that doesn’t mean Centipede: Infestation is a one trick pony. Some levels are just about killing off every enemy in sight, while others offer up missions to protect Maisy from any danger or to hit switches that rid all insects from the area. Since enemies differ in type, the player must constantly change up their strategy to simply survive. For example, winged bugs such as wasps fly towards the player and can dish out damage upon contact. Other insects prove to be a bit slower, but make up for their lack of speed by lunging multiple projectiles at once. When both are on the screen at the same time, the player must dodge the enemy fire while getting in close enough to effectively destroy their target. The giant centipedes remain nearly the same from the original version of the game and must be hit in the center of their long bodies to be broken apart, with the two remaining sections breaking off and offering up a whole new challenge. Everytime a centipede popped up I would get excited as that one lengthy bug provided some of the most enjoyable action in the game. Maybe this is partly some nostalgia from my love of the franchise, but I never felt bored by any of the combat to start with and while the centipede was quite simple to take out, they usually gave every stage a nice, rewarding finish. 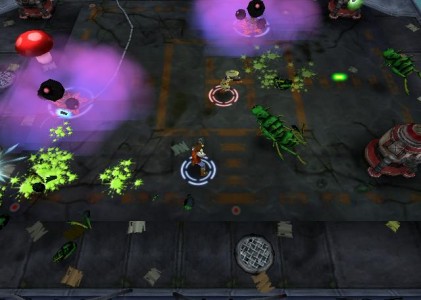 To take out this mass amount of foes, your going to need a lot more weaponry than the standard gun Max carries. Luckily, an upgrade system is in place to offer some new gadgets while you are in the heat of bug warfare. Max’s standard gun works well enough to kill almost any enemy, but it can take quite a few shots to take out the bugs found later on in the game. Whenever an insect is destroyed, they can drop power-ups that enhance your arsenal for a limited amount of time. There is an ice blaster that freezes foes instantly, a flame thrower, and even a powerful sweeping laser (just to name a few) that all prove to be quite useful, even the most hectic of situations. If you pick up two of the same power-up, the power of the said weapon is then doubled. This allows your ice and fire blasts to fire further, your missiles to grow stronger, and lets your laser now fire in two directions for a much more devastating (and very satisfying) effect. The plants also get into the action, as some bugs drop shrubs that are armed with the same variety of powers and can defend a certain area of the stage for a short amount of time. Even though the game is technically a twin-stick shooter, I definitely got some tower defense vibes while playing and this element allows for a more addictive experience overall.

After you complete the many levels in the game, WayForward have made sure to keep the re-playability factor high as there are good number of both achievements and collectibles to obtain. Songs from the soundtrack, concept art, and even extra skins for characters are all unlockable and provide a nice incentive to go back in for more bug bursting chaos. The achievements are also quite creative, rewarding players for using certain weapons or defeating bosses in one specific manner. Exclusive to the 3DS version is a Streetpass function that has players swap data to receive unique “grab bags” of content, which can also be purchased with Play Coins as an alternative.

Visuals/Audio
The graphics in Centipede: Infestation are by no means going to blow anyone away, but they fit right in with the characters’ cartoon designs and feel appropriate for the post-apocalyptic setting. If anything, I would say one of the best features of the visuals is the way that bugs explode in a nice and juicy manner when killed. Cutscenes are also present to explain more pivotal parts of the story, and are almost like watching a western anime film. Not all of the story is told through these scenes though, as most of the dialogue is shown in a still-animation format. This method worked to tell the lighter parts of the story, but at times the characters expressions seemed a bit un-fitting to the emotions they were meant to portray (I’m talking to you, Maisy). The 3D effect is rather subtle as a whole, but flying insects do provide a reason to keep the slider up as they can often appear to be flying right towards the screen. 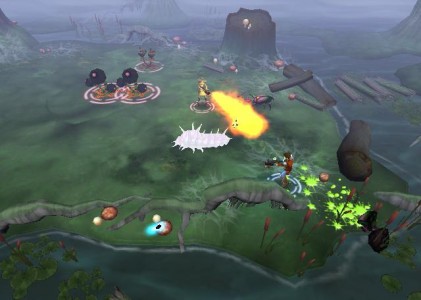 The music in the game was definitely one of the finer features of the entire experience, as each tune made the action more exciting and fit well with the futuristic setting. There is quite a bit of voice acting in the game as well and aside from the graphic mix-up, all of the actors do a decent job of bringing this plot to life. Each gun you use also lets out a distinct sound, which makes the abilities sound as powerful as they perform. Oh yeah, bugs go SPLAT when shot as well, giving greater reason to kill every legged creature in sight.

Overall
Centipede: Infestation retains every factor that fans of the Atari classic remember and throws in a ton of new elements that feel very fitting to the prestigious name of Centipede. The gameplay is fast paced and addictive and hearing bugs of all types explode never gets old. As you would imagine, it seems like a daunting task to perform when giving a proper plot to an over thirty year old property, but that is why Infestation is special. Not only is the story interesting, but I feel this tale could easily spawn sequels and could very well re-start the entire franchise as a whole, which is a feat WayForward and Atari should be very proud of. Drop your gardening tools and prepare grab your ice-gun, as Centipede: Infestation is one of the best 3DS games a two legged creature can find.