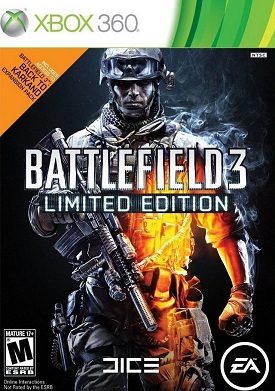 Overview:
There are few series which can draw as much of a following like Battlefield has. There are plenty of modern military shooters on the market but this series has always stayed at the head of the pack, surpassing countless other titles and fighting for the lead against another popular shooter. The series has always had a slight edge over its opponents considering the Battlefield games have always consisted of large multiplayer maps, vehicles to destroy your opponents in and a massive amount of destruction. It has been only a year since Battlefield: Bad Company 2, but this marks six years since the first numbered sequel of the franchise. Does Battlefield 3 retain its place as perhaps the most thrilling and exciting shooter experience around? Let’s find out.

Visuals:
Now the first thing I should re-iterate is that this review took place on the Xbox 360 console. Unlike the PC or PlayStation 3 releases of the game, Battlefield 3 arrives on two separate discs and due to the limited amount of space on these discs there is an optional HD texture install that requires 1.5 GB of space on the hard drive. The reason this is optional is due to the fact that not all Xbox 360s come with a hard drive and most recent ones come with only 4GB. 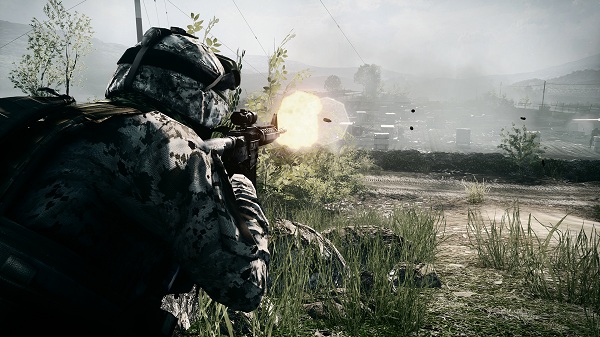 Therefore I chose to try out the title momentarily without the texture pack installed in an effort to see how things would look between the two titles. Let me say this now, if possible free up space on your hard drive as the HD textures are practically a must. The difference in the texture quality is quite literally night and day. While the most drastic changes are in the environments themselves, one glance at the HD visuals you could see with the package should instantly convince anyone that the 1.5 GB HD Texture package is a necessity.

But on to the HD graphics themselves. Battlefield 3 uses the Frostbite 2 engine and this engine truly delivers amazing visuals. There are impressive visuals all around you as you play through the title’s campaign mode with many scenes simply breathtaking due to how amazing they look. The quality of the graphics you will be seeing is something that should not be missed as everything is impressively designed and textured.

A great example of this is best described through one instance in the multiplayer segment of the title where I was laying down suppressing fire while defending a capture point in Conquest on the roof of a building nearby. In the air above me I witnessed enemy jet damage an allied helicopter enough to force it to begin spiraling to the ground out of control. In an effort to avoid this now on fire spinning helicopter I ran to the staircase inside and took cover, only to witness the helicopter smash through the roof of the building, spin on its side as the rotor blades dug into the ground and tear apart 90% of the building I took cover in before exploding, only leaving the stairwell and a small portion of the roof remaining. This all played out like something that one would see in a pre-rendered cutscene, but was happening right in front of me in a random multiplayer match. 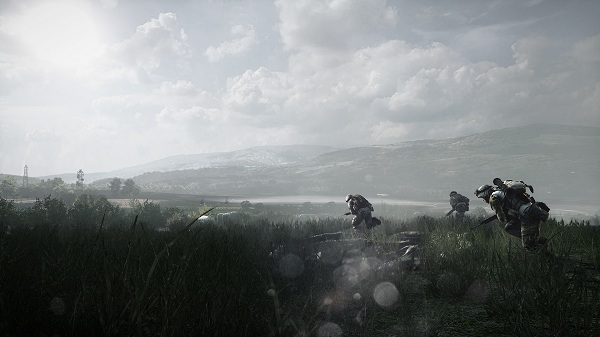 Of course there are a few problems with the engine as well. I’ve experienced a number of texture pop problems where the game took a few seconds to load in the HD textures and this was with both discs installed to the console. There are a few problems with character clipping as well, especially with legs sticking out of building walls that could potentially be an easy kill for those outside. These problems are merely a hindrance however for what is an amazing treat for the eyes.

Audio:
Nobody can ever say that Battlefield 3 is not an atmospheric title. As you play through levels and multiplayer matches you will not only hear realistic sound effects for everything that you are using, but likewise for everything around you. Battlefield 3 does everything it can to immerse you in the action as you move along a section of the field and hear a jet fly past in the distance and gunfire in the direction you are running towards.

Of course the voice acting is just as impressive with most characters sounding like they have been well trained and match the situation perfectly with their tones. More often than not your allied NPCs and even allied multiplayer characters will randomly yell out during action which makes the game all the more realistic feeling.

Single Player:
Now considering Battlefield 3 comes with two discs, it is worth noting that Disc 1 is multiplayer and co-op missions, while Disc 2 is the Single Player mode. This already should let you know what the priority in Battlefield 3 is, but nonetheless EA and DICE have created a rather exciting, if not short and linear experience for people to explore outside of the game’s multiplayer aspect.

Players are initially thrown, quite literally, onto a top of a moving train and have to perform a number of quick time events to enter into the train and begin to try and stop it by killing every terrorist on board and disable the bombs that are rigged to explode. Don’t worry too much though, because before you happen to finish that task you find out that what you just saw was the present, while the game immediately throws you into a flashback and begins to explain what exactly is going on. 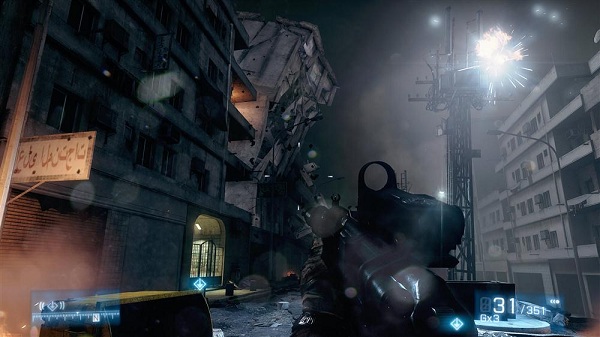 Players jump into the role of Staff Sergeant Henry Blackburn who just happens to be in the middle of an investigation for something, at the time, have no idea about. The title quickly flashes back to his time in the field where both he and his squad are in combat in the Middle East. From there the player follows mostly in Blackburn’s footsteps until they find out exactly what is going on and venture through a couple of minor twists until ultimately the conclusion.

Now if this doesn’t sound like an exactly thrilling storyline the truth is that at its core it really is not. The storyline never really takes a chance to expand upon itself and the single player experience is unfortunately hindered by the fact that everything has been limited to a simple straight linear experience. This may work for other titles but the Battlefield series isn’t exactly a series that should have gone that route.