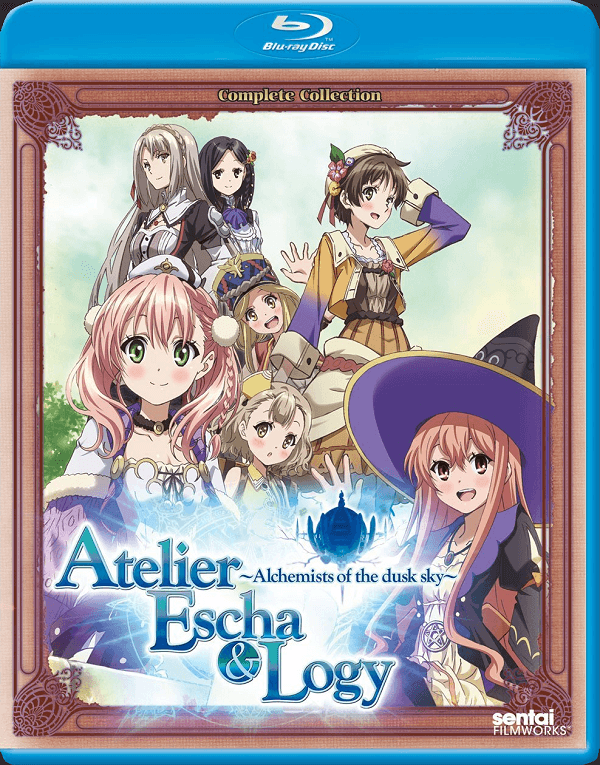 Overview
The Atelier video game franchise has been around for over ten years with a new title being produced nearly every year since it began. As such it came as something of a surprise when an anime adaptation of Atelier Escha & Logy: Alchemists of the Dusk Sky was announced. This is largely due to the fact that the anime would be adapting material that happened to be the second game in a trilogy, skipping out on details from the first title Atelier Ayesha. Despite being a strange title to choose as the series’ first foray into anime, is Atelier Escha & Logy: Alchemists of the Dusk Sky worth it?

Story
The world in Atelier Escha & Logy has been decaying for unknown reasons with very few places remaining inhabitable. The young alchemist Escha Malier is has lived her entire life in the small town of Colset on the fringe of the uninhabited land. She has always remained optimistic and believes in her abilities as an alchemist which she learned from her dearly departed mother. Despite the fact that she has lived alone most of her life, with only an automaton named Clone helping raise her, Escha has kept her dreams of working for the towns R&D division and visiting the floating ruins above the town alive. 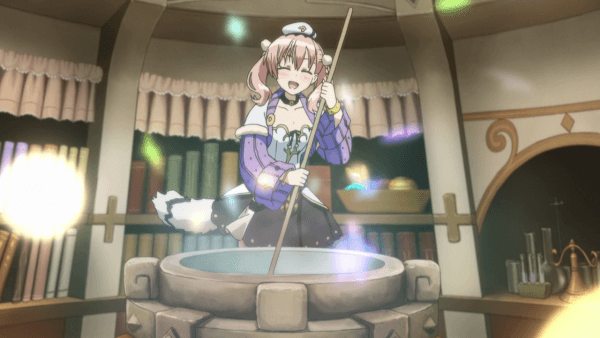 Thankfully one of her dreams comes true at the start of the series as Escha is hired as a fresh alchemist for the R&D division where she is paired up with another alchemist who just arrived in town. His name is Logix Fiscario, nicknamed Logy, and he has spent his time working in Central where many elements of civilization still thrive and many advances have taken place.

Logy is far more familiar with using more modern alchemy techniques and almost always having supplies so the concept of having to gather ingredients from the wild and use a cauldron to synthesize an item appears strange to him at first and with his straightforward attitude initially meaning that he is simply there to do the job and nothing else, it appears that he be a poor fit to work alongside Escha. 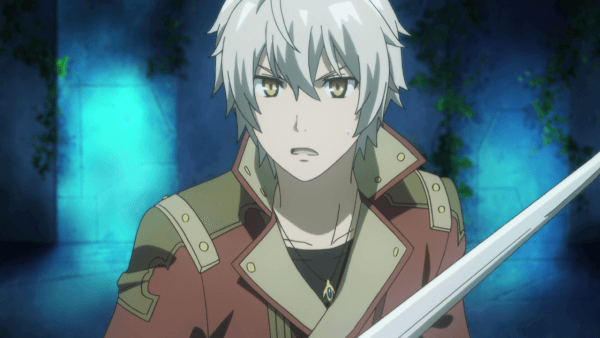 That however is not the case as he quickly shifts towards wanting to help in the same way that Escha does, even if it means going the extra mile and finding out why a village’s water source is being contaminated rather than simply cleaning up the water and leaving. This is pretty much the entire Atelier Escha & Logy anime adaptation summed up in a sentence. In an effort to cram the game’s content down into a twelve episode series we are mostly treated to seeing Escha and Logy completing various tasks that are assigned to them by the R&D division or interacting with other characters that they have met.

These characters are the same of course that one would meet over the course of the game before becoming party members and since they all decide to linger around the town after Escha comes across them, they play small roles as the story progresses with cute little side plots such as taking part in a dessert contest or visiting a hot spring. There are some small developments for the side cast here, such as Linca who is given a bit of development, but for the most part viewers will learn very little about most of the side characters. 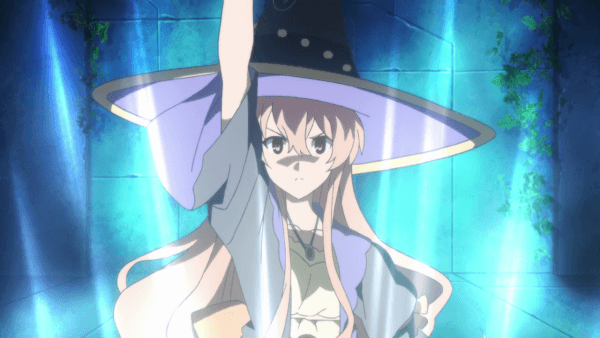 In fact this becomes an issue with the main characters as well. While the games may have saw players being able to play as either Escha or Logy with each character having certain storylines unique to their side, the anime almost focuses mostly on Escha with very little of Logy’s backstory explored though the reason he has chosen to leave Central is revealed at least.

It also doesn’t help that there are a number of references, elements to the story, and a number of characters that return to the series from Atelier Ayesha that are given only the slightest introduction. Sentai Filmworks does their best to provide a bit of summarization with notes for these characters however it barely does these characters justice. What saves the cast of characters from being simple is how charming they were written in the original source material rubbing off onto their characters here. Sure we learn very little about most of them but the charm still exists in how they act, resulting in a cast that is still enjoyable but lacks delivery. 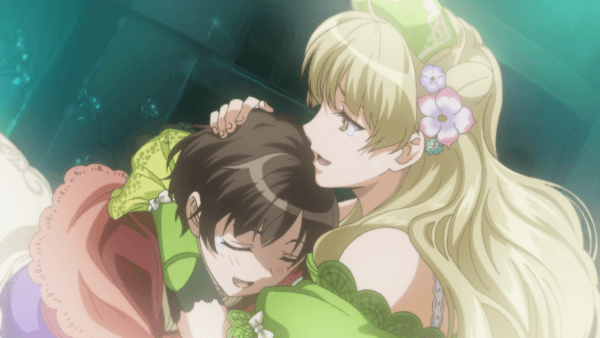 The main storyline barely kicks into place during the last few episodes as the group attempts to reach the ruins in the sky. This means that while the story does wrap itself up at the end, it does a rather poor job actually explaining certain events and even building up the nature of what the cast is actually doing. The end result feels like something that fans may be able to enjoy if they wish to see these characters once more in a different style but ultimately spoils some elements of the game in an effort to wrap things up, albeit in a manner that will leave fans hoping for any elements of romance disappointed.

Visuals
One element that did manage to transition well into anime form is how great the artwork for Atelier Escha & Logy: Alchemists of the Dusk Sky is. The character designs remain as lovely looking as before with plenty of details going into keeping the cast looking as fans would expect and a lot of attention paid to keeping Escha’s tail in motion at practically all times. 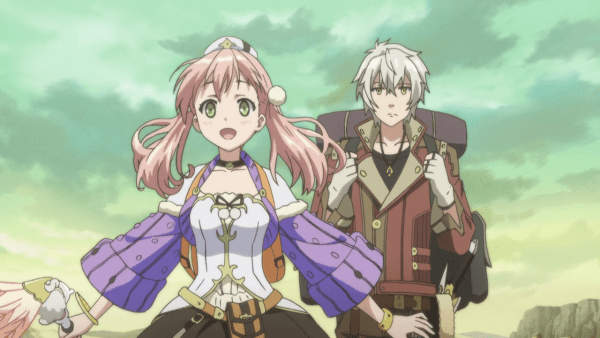 The background art is given the same level of detail though the actual enemy designs do stand out quite a bit as CG work was done to place some of the larger enemies into the game, making them something of a poor fit compared to the designs of everything around them. The animation on the other hand is poorly handled with most of the fight sequences simply being finished with a few skills and various tricks used to take shortcuts in animating character motion resulting in a number of lackluster looking scenes.

Audio
It is worth noting that Atelier Escha & Logy: Alchemists of the Dusk Sky’s anime release does not contain an English dub but the animation studio was able to retain the original Japanese voice actors for the cast which is a nice touch considering many fans may have played with that track active and thankfully these voice actors know how to handle these characters already and do an excellent job here. 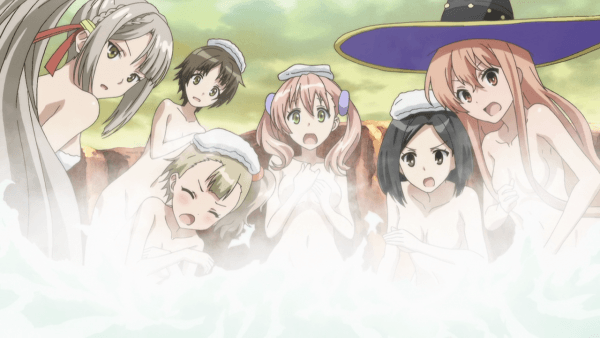 The soundtrack is enjoyable but lacks many of the outstanding tracks found in the source material. This is by no means a terrible thing, as the background music is quite fitting, it just could have been better. The opening theme “Asuiro” is performed by Escha’s voice actress Rie Murakawa and ending theme “Fuyumidori” by Haruka Shimotsuki are fitting considering the theme of the series but aren’t memorable.

Extras
Sentai Filmworks’ release of Atelier Escha & Logy: Alchemists of the Dusk Sky only features a clean version of the opening and ending animation accompanied by trailers for other anime series released by the company.

Overall
Atelier Escha & Logy: Alchemists of the Dusk Sky seemed like a strange fit for an anime adaptation but it could have worked well considering the fan base behind the series and the lore it can draw from, however with poor pacing and only sparse character elements used throughout the storyline it can feel lackluster at times. There are some shining elements of the series thanks to the cast remaining as charming and ever and enough of the core storyline remaining in place to give viewers a unique viewing experience, albeit one that could have been handled far better.