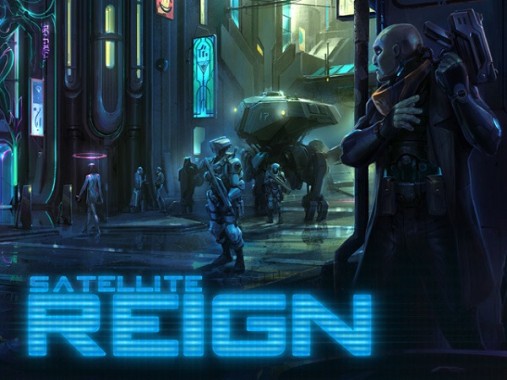 Syndicate is an old PC classic in which you played an evil megacorporation in a cyberpunk setting, fighting to take control of the world with the liberal use of heavily augmented agents. Satellite Reign has been described as a ‘spiritual successor’ to the old Syndicate franchise and as a fan of the old series I wanted to see firsthand what 5 Lives Studios had done to earn this title. Read on to find out what I thought. 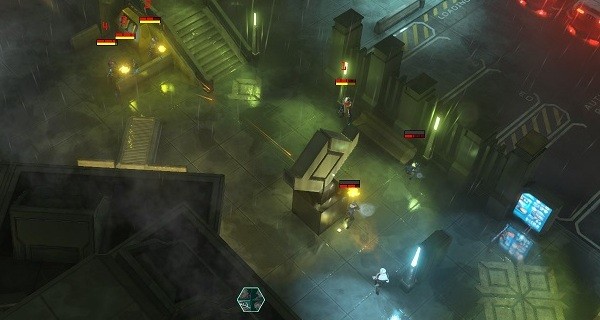 Let me start by pointing out that Satellite Reign is currently in Early Access on Steam and the current build is at a pre-alpha stage. There are a fairly significant number of bugs with everything from abilities not activating properly to units getting stuck on various bits of terrain. Cars themselves are also somewhat prone to infinite donuts when making turns and occasionally NPC civilians decide to engage in flight when sitting on a bench so it’s easy to see that there are still a number of things which need to be ironed out. Similarly, a lot of features have not been implemented fully as black market fixers and info terminals (among other things) are yet to be implemented. A lot of the text appears to be a placeholder, but in the meanwhile you’ll be able to enjoy some instances of very geeky humour as you outfit your agents. Besides these points however, I was surprised and impressed by just how much content there currently is in the build and how well (relatively) it works. 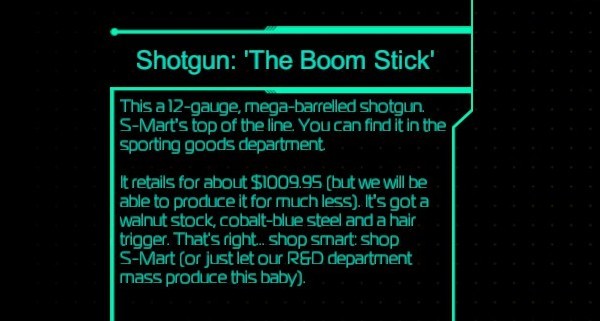 This game oozes cyberpunk. Even at this stage in development, the city looks and feels great… at least as far as dystopic urban cityscapes can “look and feel great”. There are street markets and skeezy pizza joints across the road from fortified military complexes. Squares are illuminated by neon signs advertising everything from food to sex and are under the watchful eyes of security cameras. The sprawl of Neuromancer and Blade Runner is recreated in loving detail here with all the danger, squalor, and sleaze (this is the ‘Red Light District’ after all). This environment is the perfect mix of noir and science fiction, kudos to 5 Lives Studios for pulling this off so early in development. My one criticism with this aspect is that even with the population sliders set to maximum, the streets still felt a bit sparse of life… although I imagine this may have been a deliberate limit to improve stability at this point in the game’s development lifecycle.

One thing I really enjoyed was the soundscape which accompanies your exploration of the city. The soundtrack is suitably synthy and sci-fi, but what really gets the setting is the ambient noise of the city itself. Vehicles speeding by, radio chatter between security forces, and sporadic gunfire off in the distance all combine to give you the feeling that you’re immersed in a living, breathing, near-future dystopia. 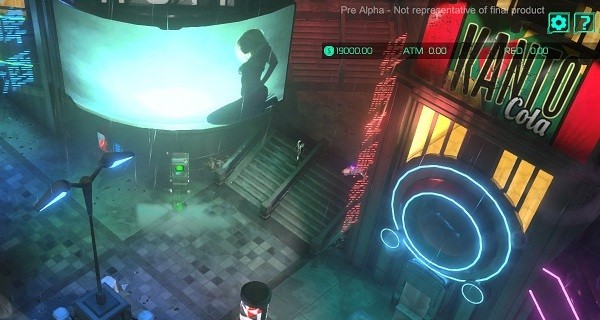 Navigating through the city is simple enough with the player being given a god’s-eye view over the map as they give orders to their team of agents. The camera is able to zoom in and out but can only be rotated up to 45 degrees either way from its starting position. I found this restriction to be somewhat unusual but I was able to play through the current build fine. I imagine that this restriction might have been placed to save on rendering out a fully three-dimensional city. It certainly gives the game a quasi-isometric feel and if it means that they can focus on making the city look as awesome as it can be (in the limited span I can see), then it is a sacrifice I’m happy to make. The camera also has a subtle sway to it, to create the sense that the player is watching the action/carnage unfold through the camera feed of drone flying over the city.

The gameplay itself feels more like an action-RPG rather than a traditional real-time strategy game. The player has control over a team of 4 agents, each with their own class and abilities. The soldier is the muscle of the team and has upgrades which increase his potential to tank damage. The support has access to healing nanobots and stims (which slows down time for your team). The infiltrator has access to cloaking and silent, melee attacks which can eliminate most targets. The hacker has the ability to hack into secure systems and even the neural implants of guards/random citizens. The individuals in the team don’t get much characterisation beyond their abilities and visual design… but I guess this reinforces the fact that they are just pawns in your scheme to break Dracogenics control over the city. 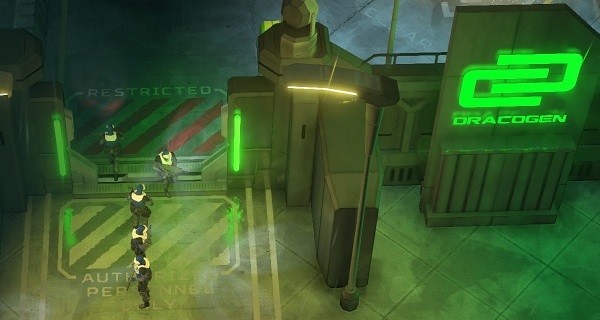 The game gives you a variety of objectives which largely revolve around getting into various places where you shouldn’t be. Objectives generally have a number of sub-objectives which can be completed in order to make the main goal easier i.e. infiltrating into a compound is much simpler if the guards all have faulty cybernetics because you assassinated the main doctor and have his replacement on your payroll. These objectives reward you with items such as augmentations or weapons (which can then be researched) and district-wide bonuses which help with various aspects of your operation.

Your agents themselves are fairly adept at moving through the city and stick to cover when ordered to move alongside low walls and such. There is a bit of a problem with the agent pathfinding AI not accounting for characters and getting stuck on other agents or civilians occasionally. Furthermore, the pathfinding AI doesn’t appear to care much for respecting restricted access zones as my agents began waltzing through a security compound when I told them to get to a point across the map. I was aiming for more of a low-key approach at the time but kudos to the AI for sticking it to the man. 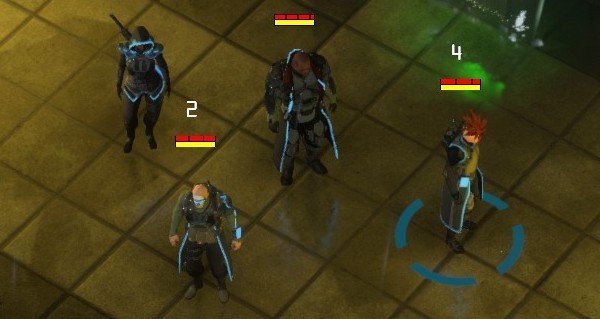 The stealth and combat mechanics work reasonably well with the movement system as both rely upon line-of-sight. Cameras and security forces will generally only detect you if you are in their line of sight (generally indicated by a cone of light). If they spot you, cameras will track you for a short while and call for reinforcements, while security forces will attempt to engage and call for back-up if they feel the odds are against them. Most of the time the system feels fair with detection resulting due to mistiming or some other mistake I made, but there were some instances in which the guards appeared to have developed omnipotence and spotted my agents while they were in cover. Overall this aspect works quite well, but more often than not I had my infiltration discovered. 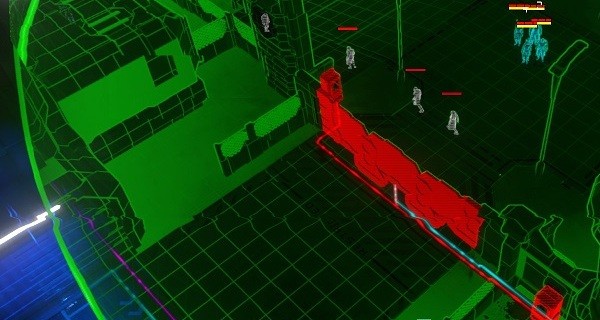 Which leads us to combat which, although requiring polish, is dynamic and enjoyable. The enemy AI responds quite fluidly to offensive actions by your agents and will take cover when being shot at. The fact that you’re generally always outnumbered when you enter into these encounters reinforces the point that going toe-to-toe with corporate security head-on is generally a good way to get your team flat-lined. Planning out flanking positions and utilizing agent abilities are a great way to weigh the scales in your favour and even then things can go wrong. Luckily, the game doesn’t punish you for death too much as your agents are respawned (“flash-cloned) at nearby beacons some distance away and outside of any restricted zones with all their skills and simply needing to be re-equipped. 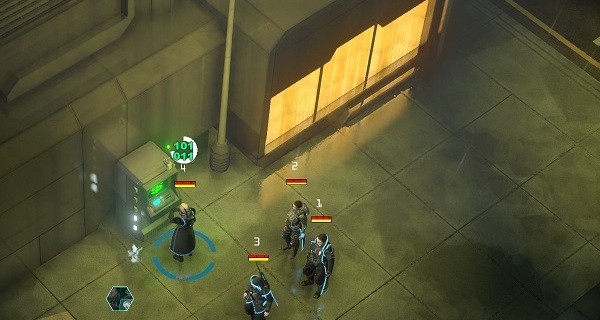 Overall, this is an unpolished gem which I quite enjoyed playing through despite its many bugs and glitches. I look forward to seeing all the new features being implemented as the game develops. I will especially be looking forward to seeing more of the city unlocked and will definitely be keeping an eye on the game as it develops.

If you want to read some more about Satellite Reign, I recently infiltrated my way into the offices of 5 Lives Studios to ask a couple of the devs some questions and you can read about it here.