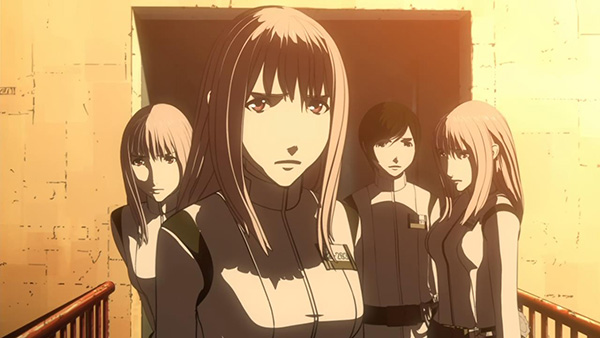 Mecha fans are spoiled for choice these days. Each season has something new to add to the resurgent robot genre and Spring this year is no different, giving us not only Knights of Sidonia but also Captain Earth. The premise for Sidonia is a rehash on paper; humans now live on giant colonies in space and face the Gauna, a tentacled alien menace against which they do battle using humanoid frames called Gardes. It’s also a whole lot more than that which is why I decided to cover it.

Let’s get one major flaw out of the way so I won’t be repeating myself for ten weeks. The character animation is bizarre. I’m not entirely sure what they wanted to achieve but the faces are CG-ish and look awkward, not to mention that it results in jittery frames. Now that we have fish-faces taken care of, let’s move on. 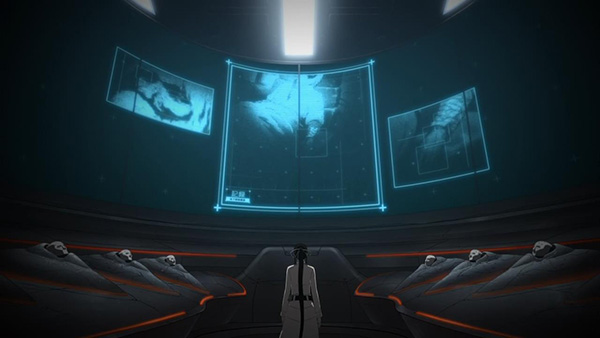 Knights of Sidonia has a ridiculously fleshed-out back story from the get-go. Everything is meticulously detailed; cockpits, pilot interfaces, the colony’s inner machinery and so on. Nagate Tanikaze is our hero of the show. He spends his days deep in the bowels of Sidonia, a monolithic ship housing a portion of humanity, training to pilot the Garde mechs using simulation pods.

He’s a little weird, rarely mingling with the other residents and forced to steal rice from the massive food production facility that feeds the population. After getting caught he is brought to the surface for the first time and risks being thrown in the “bio reactor”, which I’m guessing is a furnace that powers the colossal vessel. Luckily he is saved by Ochiai, a man who represents the captain of the ship, a woman who hides behind a mask yet removes it when she meets Nagate. I’m going to hazard a guess that she isn’t exactly human 100%, as her face does look a little awkward. 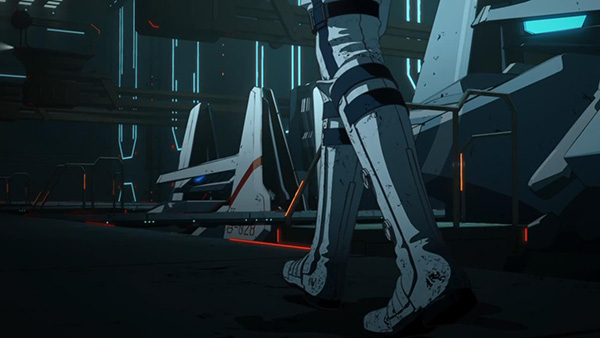 Earlier on we see her in a room with stone faces talking out of raised capsules. They mention someone called Saitou Hiroki, his mummified remains and whether Nagate inherited his skills and experience. To add fuel to the intrigue, we see activists proclaiming that Sidonia is ruled by “undead” waging a false war to prolong their lives. Naturally they are dismissed as crazy but those stone faces could be exactly that.

So Nagate is asked to become a Gardes pilot of Sidonia and next thing you know he’s introduced to a bear called Hiyama with a robotic arm. Even stranger, he meets Izana Shinatose. Here we learn another curious fact: procreation can now be done with both men and women and there is now a third gender where the body adapts after a partner is chosen. This isn’t very clear because what if you don’t end up choosing a partner? Or if your partner is of the third gender too? 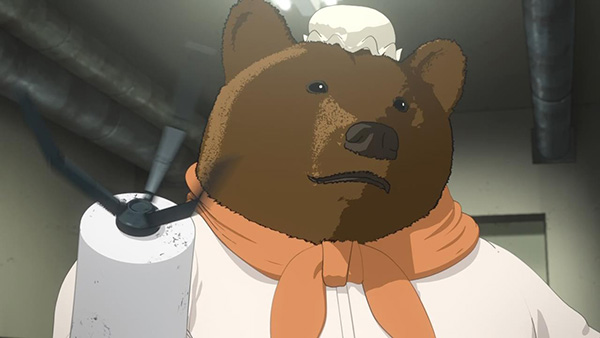 Sidonia borrows traits from other shows like the Gauna having a “core” which needs to be destroyed, the brain or spinal cord, which can only be pierced with a special spear called the Kabizashi, of which only 28 exist in Sidonia. Nagate is assigned the Type 17 Tsugimori Garde and we see a bit of rivalry. Norio Kunato is a proud character who believed he would be the one to use this machine.

Nagate is called to his first sortie, a mining mission, and the launch and takeoff sequence is awesome. I really love the cinematography and camera angles in this series, whoever is in charge of that knows what they’re doing. Have I mentioned the attention to detail? 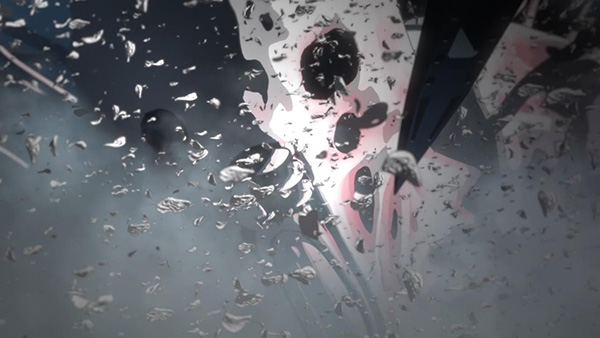 As expected, the mining op is derailed by the appearance of a Gauna from beneath the ice of the dwarf planet, and they haven’t been sighted for over a hundred years. This anime has a fascinating setting with incredible designs so let’s hope the plot is strong in this one!