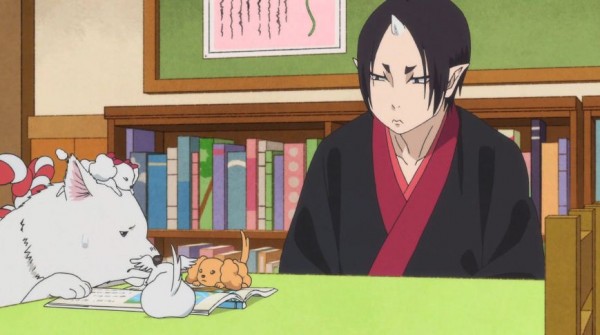 Whether they’re a legendary hero or a Goddess that guards the mountain tops, mythological entities are just like us humans in a way; we wall want to be wanted and we all want to be loved. Accepting each other for who we are is the best way to bring about peace in this world…hopefully those in the afterlife can learn it before we do because, according to this weeks Hozuki No Reitetsu, they can’t stop causing trouble because of it. 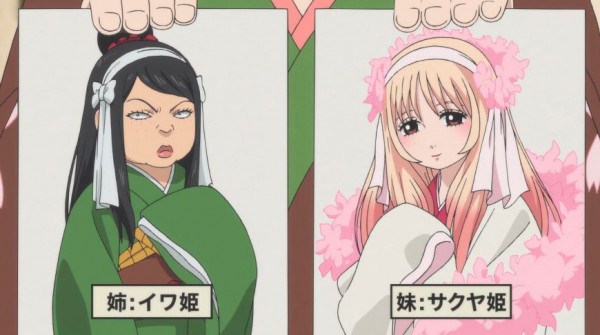 The Samurai Who Was Once Inch-High:

Any fan of Japanese legends or mythology would have heard of the “Inch-High Samurai” but for those of you who don’t; it’s the tale of a tiny samurai who one day comes across a huge mansion (which would be even bigger for him). In this mansion lived a beautiful princess whom he fell for. Realising his height wouldn’t allow for him and her to every be together, he hoped and prayed for a chance to be transformed into a normal person. While out for a walk one day with the princess, the two come across an ogre who threatens the life of the beautiful young lady.

The Inch-High Samurai wielding a needle battle the ogre but was dealt with easily when the ogre simply swallowed out hero. From the inside, the inch-high samurai poked and prodded at the ogres stomach until he was spit out along with a magical item called the miracle mallet. The ogre fled and the princess used the mallet to make the tiny one normal sized. The two got married and lived happily ever after…but not in the world of Hozuki No Reitetsu! The episode starts off with Shiro taking care of three puppies who belong to his boss, if you remember past episodes you’ll recall that he had babies with a cute little dog called “Cookie”. The three adorable puppies want “Uncle Shiro” to read them a story and they choose the tale of the “Inch-High Samurai” but…Shiro can’t read. 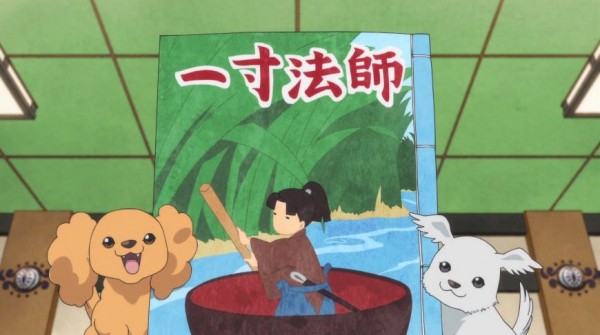 Luckily for the pack, Hozuki is around the corner as always and he offers to tell them the story of the Inch-High Samurai. Already this episode was highly entertaining and actually quite funny despite the “dry spell” it’s been in the past couple of weeks. Hozuki being a genuinely nice demon, offers to take Shiro and the kids to actually go and see the samurai. They all agree and head off on a little excursion. They eventually turn up to where the man is now residing (he happens to be a worker of hell because of a nasty little thing he did while he was alive that didn’t turn up in the legends) and he doesn’t seem to be as upbeat as his stories make him out to be. Hiding in the bushes, the group soon realise that the “former inch samurai” is not too happy that he’s normal sized.

It seems as though nobody pays him as much attention anymore and that people actually liked him better when he was an inch tall. Eventually he is introduced to Momotaro, another former legend who no longer has the same popularity level as he used too, and they bond. A friendship built on understanding blossoms and these two fallen stars are happy once again. If you’re a constant reader of my Hozuki No Reitetsu anime impressions than you’ll be aware that I enjoy when the series takes these legendary heroes and myths but flips them on their heads so they act almost like normal people. That’s why I really enjoyed this half of the episode. To see the hero of a story acting like a former Hollywood star is something so entertaining for me and I’d have to say my favourite episodes are the ones that are similar to this. Not only was it somewhat educational, it was funny like the series was when it first started out. Brilliant! 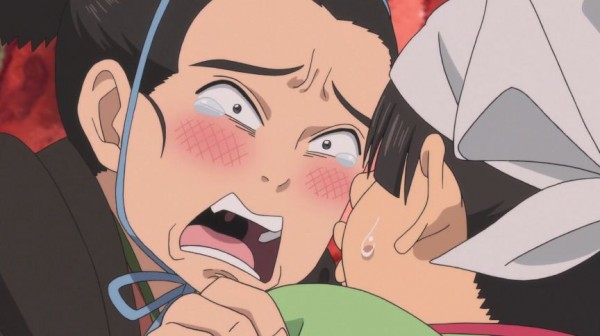 The Quagmire Sisters Of The Mount:

“Beauty isn’t everything.” is just something ugly people say. Am I right? This half of episode eleven takes us into the real world or “mundane world” if you ask the cast of Hozuki No Reitetsu. A place where beauty rules over everything and everyone, even the spiritual creatures who spend most of their time there. Two sisters, Princess Rock and Princess Blossom, were one day set to marry the son of the great Shinto God Amaterasu but on the wedding day Princess Rock (the uglier of the two girls) was told she was far too unattractive to be married to and was thrown out of the wedding.

Many, many years later Princess Rock sits on Mt. Fuji as its spiritual protector but, so overcome by jealousy still to this day, every time a beautiful woman steps foot into her land she uses her powers to make trees crush them, trees that just so happen to be spiritually connect to another mountain-dwelling spirit called Kodama. One night as Hozuki and Oko are sitting down to a meal together they’re met by Kodama who, after some idle conversation, states that the mountain is in some sort of trouble. Princess Rock is far too aggressive with the way she deals with her jealousy and it is beginning to affect the mountain and those who call it their home. A small mountain festival for spirits is taking place that night and Kodama invites Hozuki with the hopes that hells best demon will be able to defuse any tense situations and make for a great festival. Obviously, Hozuki agrees and they head down to Earth. 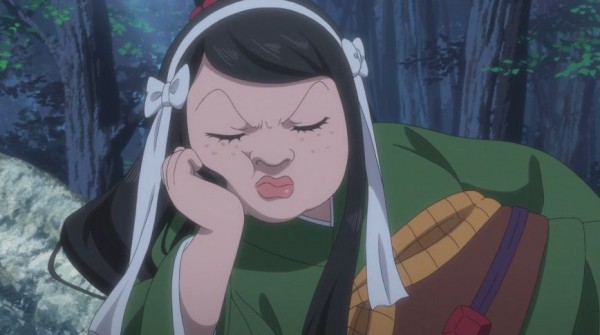 There Hozuki meets Princess Rock who almost immediately falls in love with him but cannot help to think that her appearance isn’t good enough for him. Hozuki being Hozuki, he’s as honest as he can be and its actually quite flattering to Princess Rock but disaster is on its way. Princess Blossom eventually turns up to the party, taking the gaze of every spirit there thanks to her beauty. Princess Rock explodes into a violent rage that is quickly turned around by Hozuki. Taking you all through the “play-by-play” isn’t the best way to experience this episode. It’s a fantastic one to watch and it ends quite well.

I enjoyed this episode thoroughly, not just this half but both! I had a smile on my face from the opening minute to the very last minute. Hozuki No Reitetsu does many things well and this is one of them; lessens are taught through humour and through the actions of these supernatural beings but it is done so fantastically. Usually anime that tries to teach its audience a lesson falls flat but Hozuki No Reitetsu seems to know what it’s doing because it is doing it well. The voice acting, the music, the visuals, it’s all great and it has taken me this long to actually fully appreciate it. Sometimes you just have to sit back and think of every element of an anime to truly appreciate it and this episode of Hozuki No Reitetsu once again opened my eyes. Go and experience this episode for yourself, people, it’s a great one.