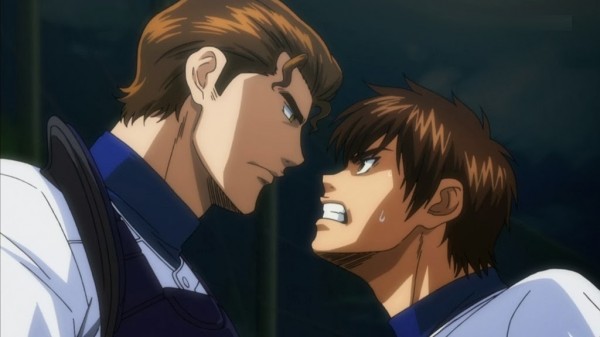 Last time in my Ace of Diamond impressions for episode 6, I wondered who would be the man to bring out Eijun’s inner diamond – who would be the one to make him shine? Well with this episode it looks like we have our answer and his name is Chris.

After the intense game between the first years and upper classmen, talk has spread like wildfire throughout the school about some of the upstart rookies that left quite an impression. Of course the most impressive was Furuya, who was instantly placed in the first string for Seidou. But more interesting is the developments for Eijun and Haruichi, both of whom are moving up in the world, straight to the second string. Sure its not quite the first string, but Eijun definitely has a real chance to shine in second string games. He now has a platform to improve himself and his first real step towards become the Ace of Seidou. 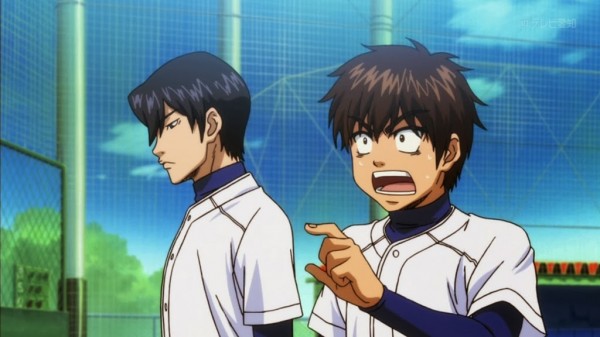 Coach Kataoka now has his work cut out for him with two upstart pitchers both keen to become aces. He must assign them both a mentor to help them with their training. He introduces Eijun and Furuya to Chris (a second string veteran) and Kazuya (the star player of Seidou, with whom the boys are already acquainted). Eijun is dead set on Kazuya becoming his mentor, but Kataoka has other plans and much like has become the norm with Ace of Diamond, something unexpected happens – Eijun is paired with the mysterious veteran Chris.

Eijun is far from pleased and Chris isn’t exactly happy himself. We soon come to learn that Chris has quite a reputation. Chris is known as the rookie killer, why is that you may be wondering? Well it is because every player he has mentored has been ruined by his training techniques. Will Eijun be the next on the chopping block of Chris? Well that remains to be seen. My bet is that Eijun and Chris will struggle with each other’s conflicting personalities for quite some time, before ultimately finding a common ground. But this is Ace of Diamond after all, so it will most likely play out entirely different. 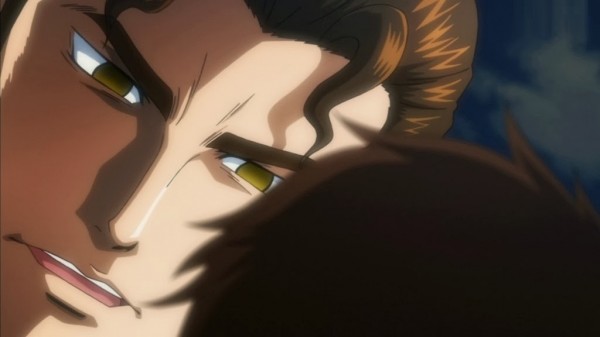 The thing that really defines Ace of Diamond however isn’t Eijun’s determination to be ace, it is his journey to unite a team as an ace. He wants to be the guy that brings everyone together. Characters like Chris seem to be placed in his way for him to win over. Eijun is constantly in a position of having to prove something to someone. It is a story that fits like a glove for the character of Eijun and I expect to see him unite Seidou one by one as a true ace. That is of course a long way off for Eijun, but we are seeing this journey etched out clearer and clearer with each passing episode.

Ultimately this episode marks a major step forward in Eijun’s journey and introduces a character who looks to be a major player moving forward. Chris has all the makings of a classic sports anime antagonist turned mentor and his odd couple relationship with Eijun is sure to make for some interesting viewing as the series progresses.

Ace of Diamond is definitely making a case for itself as the best sports anime this year and with emotion running high and writing this good it is hard to imagine anything coming close to the awesome watch we are getting with this anime. Each episode feels over too soon and that is the real benchmark of a great anime series, the kind of anime that you just don’t want to end, that is Ace of Diamond.

Ace of Diamond manga to get anime adaptation