“What exactly is this ‘Oculus Rift’ thing I’ve been hearing about?” If you’re asking yourself this question, then allow us to enlighten you about one of the most unique and highly praised pieces of gaming tech to be on show at E3 2013. The Oculus Rift itself is a new type of headset that aims to expand gaming interaction and immersion by the use of full panoramic vision in virtual reality. This virtual reality technology features full 3D capability, and head tracking motion, moving the camera and angles in accordance with the users head motions.  A “Best-in-show” award winner at E3, the Oculus headset was also one of the premiere exhibitor items on show at the first ever PAX Aus held last weekend in Melbourne. There, I got to try out the VR headset for myself and weigh in my two cents to the gaming community.

Now before the hardcore gaming fanbases mentally groan and dismiss it as “just some silly gimmick”, it’s worth checking out both the official Oculus Rift site and various Youtube demos to see what it’s all about. When most people think of the term “Virtual Reality gaming” most minds are drawn back to the horrendous performance of Nintendo’s Virtual Boy in the ages of consoles past. This was a question raised during an extensive media-access session where some of us got to try out the headset for ourselves, with some help from the developers. Nate, who was taking us through the demo laughed and said “That’s a question we get a lot. Whenever somebody thinks Virtual Reality, they think ‘Oh god, the virtual boy.’ But big difference is that nowadays we have the proper HD visual and head tracking technology to create truly immersive VR. And the community response overall has been really positive.” 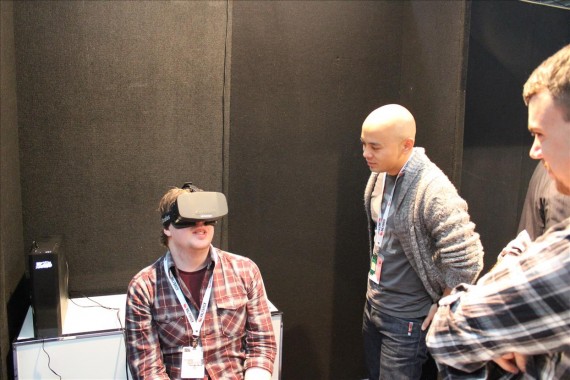 This was true. What really surprised me when I first walked the halls of the PAX Aus Exhibitor Hall were the consistently gigantic lines out the front of the Alienware booth where the Oculus was available for a public demo.. Members of the gaming public were more than willing to stand and wait over an hour to play with this new little gizmo. The floor game on offer wasn’t some basic tech demo either. It was Team Fortress 2 of all things, FULLY ADAPTED for use with the Oculus.

When we had the chance to sit down and play test the Oculus for ourselves, we got a much more personalised and in-depth look into the technology that what was being demoed on the Exhibit floor. There were two machines set up for us to test and play with. It was explained that one was for a gameplay test of a game in development called Elemental. The other demo was a fully 3D cinema simulation. 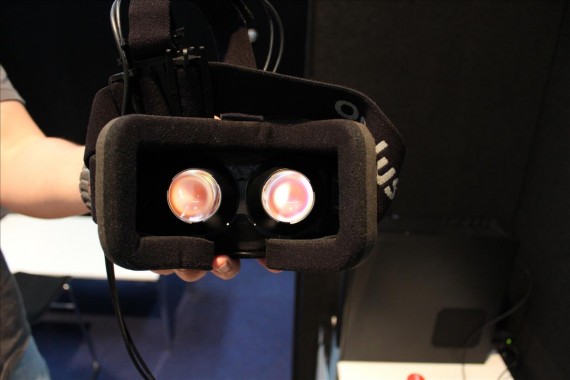 My first reaction to see the headset, (having very little experience with this myself) was how compact and simple the design was. I was honestly expecting a more complicated looking machine with much larger dimensions. To slide the device on, players were required to place their eyes into a pair of lenses, similar to binoculars. As soon as I did myself, my first immediate thought was: “HOLY CRAP, I’m in Skyrim!” 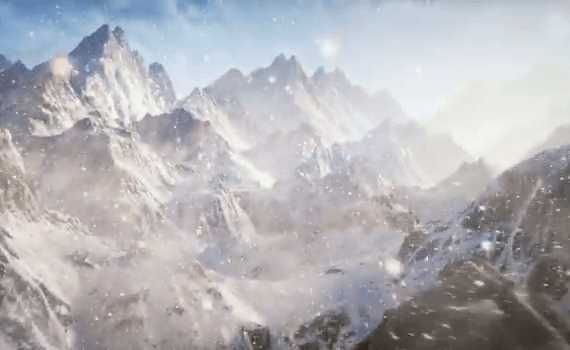 Okay, while that was not true, the demo game on offer was called Elemental, and it was highly reminiscent of an Elder Scrolls game. The first scene set the user outside a set of snow covered ruins. The textures were in surprisingly high definition HD. My very first reaction was to reach out and grab the falling snow, the graphics were just that convincing. While it didn’t have the feel of real snow, the immersion factor was immediate. Head movements matched the camera movements instantaneously. At no stage did wearing the headset feel disorienting or uncomfortable. The field of vision was extended into the player’ peripheral sight and adjusted based on head movements. 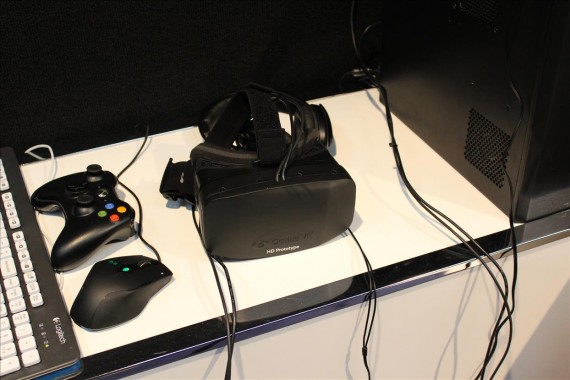 After a short movement tutorial, I was transported into the inside of a Volcano, where before me stood a black clad knight with glowing red eyes, called a Lava Warrior. At this point, two thoughts crossed my mind: “What is that?!” and “THAT NEEDS TO DIE.” It was at this stage when a controller was slipped into my hand and a simple pull of a trigger fired a barrage of magic missiles at the static target. All of the shots made ricocheted off the armour and proceeded to bounce around the gigantic cavern, my head and eyes tracking the movement in glorious HD. It wasn’t only the physics engine that stood out. The volcano’s ambient glow, particularly off the lava made the place feel legitimately warm. Despite the fact I was sitting in the middle of a busy exhibition hall with a funny looking headset over my eyes, I felt like I was truly about to go into a real epic battle. This was a sense of immersion like I’d never experienced. 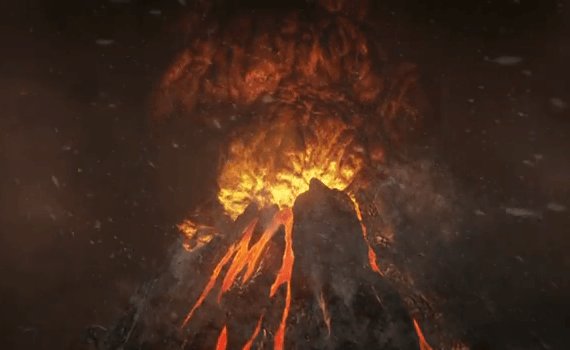 After a little free flying by way of the controller (directed by my head movements of course), I was disappointed to have to return to regular boring reality. Following the Elemental demo, I sat down to test out the second demo, the Virtual Cinema 3D. This demo was also outfitted with sound output. Again, like before the head tracking system worked like a charm, but this time I found myself placed in a giant empty movie theatre with the trailer for Man of Steel. What blew my mind this time was the fact that a completely normal video like the Man of Steel had been adjusted to accommodate the Oculus’ panoramic vision. 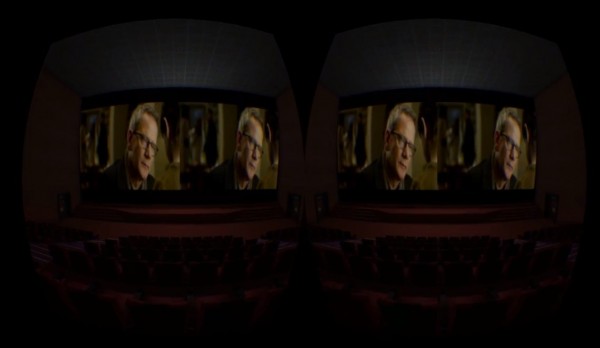 The entire experience had been extremely enlightening. Having only heard about the Oculus in the simplest of terms prior to testing it, I admit I was dubious. Nate, the team leader, said that the technology still had a way to go, but did mention that numerous developers, chief among them being Valve had expressed very strong interest in this technology. One has to wonder if the upcoming steam box might be Oculus compatible. However, from what I experienced in a short 20-minute demo, my opinion is that this technology is most certainly a game changer. This is not just a new type of screen, or some new motion gimmick, this awesome technology really could revolutionise the way we approach immersion in our video games. Nate put it best, saying “You have movies which tell stories. Then you have games that let you play stories. THEN you have VR, where you are IN the story.”

Get used to hearing the name of the Oculus Rift. This reviewer gets the feeling it’s going to be a big topic for discussion amongst gamers in the months and years to come.