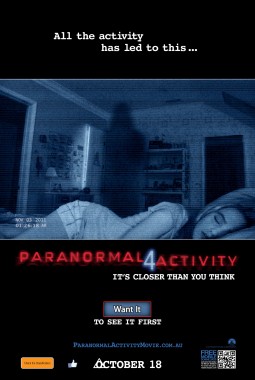 The top 25 locations that were voted for through the Facebook page and that earned the free screening of the fourth installment of the Paranormal Activity franchise are:

Congratulations to those cities!

For a chance to be among the first to see Paranormal Activity 4 at the advance screenings head to the film’s official site HERE. And for more information and updates on the movie LIKE their Facebook Page.

Here’s a short clip of some of the international screenings of the film and what people thought.

What do you guys think? Are you going to Paranormal Activity to be scared, or to laugh and make jokes about what a troll the demon spirit is? Because I know I’ll be doing the latter. Keep an eye out on the site for a review closer to the release date.

Paranormal Activity 4 is being released on October 18 in a cinema near you.

Star Trek Into Darkness Getting Advance Screening with Vine