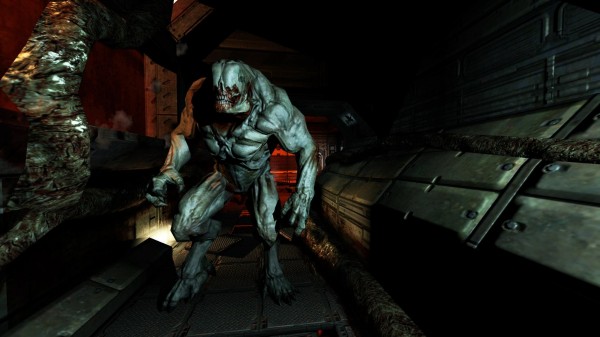 Bethesda have just announced the launch trailer for DOOM 3 BFG Edition. DOOM 3 BFG Edition features re-mastered versions of both DOOM 3 and the Resurrection of Evil add-on pack, as well eight new levels of content entitled ‘The Lost Mission.’ This edition will also include the original DOOM and DOOM 2 games, certainly making it the definitive collection of the genre-defining games developed by id Software, the pioneers of the first-person shooter genre.

Some more information about Doom 3 BFG is that it’s been Re-mastered for both Xbox 360 and PlayStation 3, offering enhanced visuals further immersing you in the demonic world like never before. DOOM 3, Resurrection of Evil, and ‘The Lost Mission’ have been optimized in 3D, featuring 5.1 surround sound, along with Xbox 360 Achievements, PlayStation 3 trophies, improved rendering and lighting, and a new check point save system allowing for smoother progression through the game. id Software has fine-tuned the controls to bring the intensity of the DOOM single and multiplayer experience to the consoles, and DOOM 3 now features the new armor-mounted flashlight, allowing players to illuminate dark corners and blast enemies at the same time.

With all these great new updates and features, picking up DOOM 3 BFG will be a totally enjoyable experience for both the new comers to the game and also seasoned veterans! Check out the trailer below and let us know what you think of it. And if you are also going to be picking this up on release day!