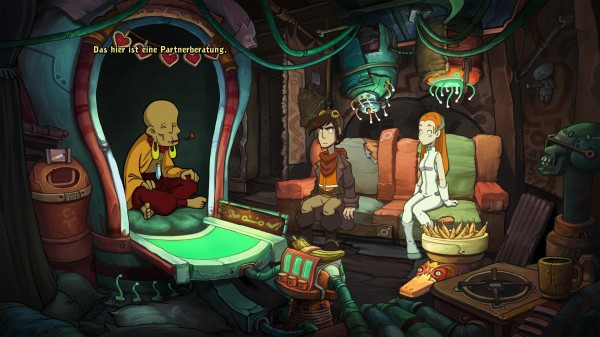 Daedalic Entertainment, the developer of acclaim adventure game Deponia, is making a sequel with Chaos on Deponia.  Bringing Rufus and Goal back together, Chaos on Deponia sees the two trying to escape once again to Elysium.  But, before they can hope to attain the lofty heights of the fair hovering city, Goal must be returned to full health and stop the chaos that is threatening the land.

Hopefully, the game can live up to the success of the first Deponia and the high expectations of its fans.  Chaos on Deponia is currently set to release on November 6th on both PC and Mac through Steam, players can get a glimpse of what is coming in the sequel from the screenshots in the gallery below.  Players can also find more information on the game from the game’s own website HERE and Daedalic Entertainment’s Facebook page HERE.