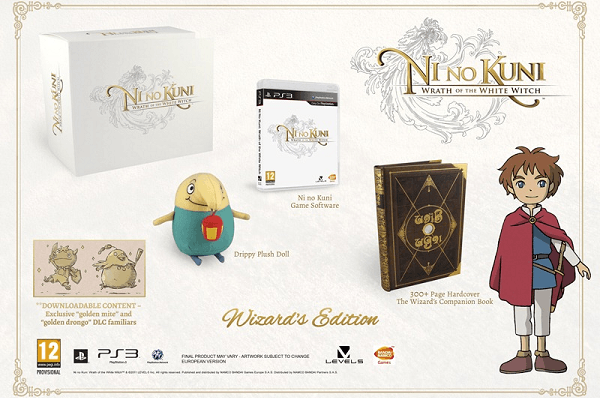 Gamers around the world were pleasantly surprised when it was revealed that Namco Bandai would be bringing Ni no Kuni: Wrath of the White Witch to North America and Europe in January 2013 and today Namco Bandai in Europe has revealed a special collector’s edition which they are calling the “Wizard’s Edition.”

As you can see above, the Wizard’s Edition will come with the game itself, a Drippy plush doll, a Golden Drongo and Golden Mite DLC familiar voucher as well as a massive 300+ page hardcover book titled “The Wizard’s Companion.” This makes for quite an impressive offering and we have reached out to Namco Bandai in North America to see if they have a statement concerning the release of such an edition for this region as well.

Update: North America will be receiving this same package as well when the game is released on January 22nd.

Ni no kuni “Ninostarter” extended through the weekend