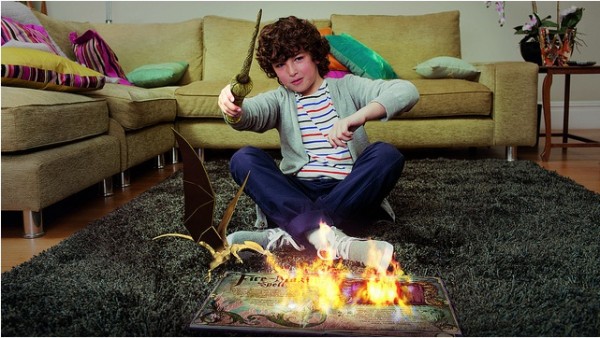 Augmented Reality (AR) functionality is becoming a lot more prevalent in games, with all the major platforms featuring it in some way. I find the possibilities it affords really exciting, and Sony are exploring an interesting direction with their Wonderbook peripheral, announced during their E3 conference.

From London Studio, the team behind EyeToy and EyePet, Wonderbook is a natural extension of the previous titles, utilizing the tech to add a layer to that old “reading” thing. What’s been demoed so far looks like a virtual pop-up book, with players (readers, maybe?) able to interact with it physically, like pulling tabs and turning pages, as well as apparently influencing the story.

Sony have announced the Wonderbook will retail for $39.99US, which includes the peripheral and a Blu-Ray game. A range of “stories” will be available to download for use with it, the first of which is quite impressive: The Book of Spells, written by J.K. Rowling and set in the Harry Potter universe.

The Wonderbook takes the role of an ancient Book of Spells, and the player/”reader” is a Hogwarts student studying it in the library. There are over twenty spells to learn about, practice and master, with House Points awarded for completing challenges. Examining the book close up can reveal hidden notes from previous students, including clues to what Sony so intriguingly refer to as a “conundrum” written by Rowling for players to solve.

The hardcore fanboys are already complaining about this, but they tend to do that about games that don’t involve shootin’ dudes in the face. The Wonderbook peripheral is a great idea, and I’m really interested to see what else Sony can do with it. If they continue to support it with quality stories and games, the Move might become the standout motion control platform.