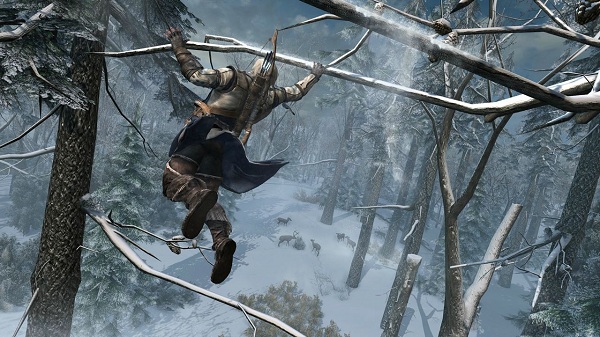 Now most of us witnessed the amazing looking Assassins of the Caribbean segment that was shown off at the pre-E3 presentation by Sony, but what other features have been added into the game to create a new and unique experience we have never seen before. Amongst a number of demo choices we opted to see how gameplay out on the Frontier would look like, as many people have been curious about how Connor will navigate through the wooded wilderness that was the Colonial United States. From what we were told, Assassin’s Creed III will cover a thirty year time span that shows events that will be happening before, during and after the American Revolution.

But that isn’t what is important now, what is important is the fact that the newly developed tree running system looks absolutely amazing. We witnessed as Connor easily climbed up the side of a tree and began running along branches, jumping and swinging from tree to tree as he snuck through the frozen limbs before dropping down into what the development team is calling stalking zones. These stalking zones are basically bushes and foliage which allow Connor to stealthily hide in. By taking advantage of this stalking zone, the player was able to kill a deer, one of the two dozen animals able to be hunted in Assassin’s Creed III. Unfortunately for her however, the smell of fresh blood drew a pack of hungry wolves, though it could have easily attracted a large bear or even a few cougars as well. 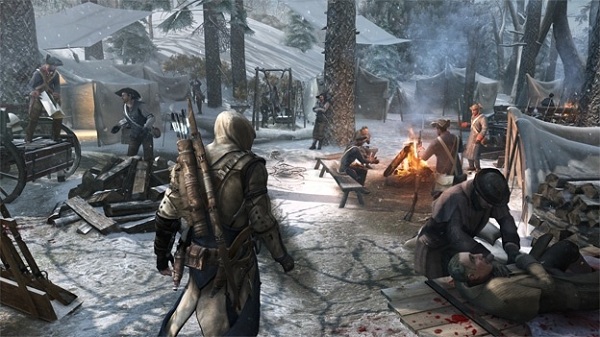 To take out this back of blood thirsty wolves we watched as Connor dropped multiple wolves with practically no interruption in his motion. He went from dropping a wolf with his axe in his left hand while pulling his black-powder pistol out of its holster and shooting another wolf with his right hand before quickly returning the gun to its holster and dropping a third wolf with his hidden blade. You see, Connor is an expert and using two weapons at the same time which plays a major role in how the team wanted Connor to always be in motion as he is fighting against enemies or assassinating targets.

More on that in a minute, because our presenter wanted togive us a peak at the way snow navigation and quests would work in the newly revamped world of Assassin’s Creed III. ACIII will be the first game of its kind to feature a quest log and allow players to undertake side-quests, such as delivering deer meat to a butcher amongst other things. These side-quests can provide a number of bonsues, though what these bonuses were was not revealed at this time. Navigating through the snow covered fields, either on horseback or on foot can be quite difficultmech, as the team has developed a deep snow mechanic which will make all characters move slower as they trudge through two feet or deeper snow-drifts. Don’t worry though, there will also be plenty of time in the summer as well for those who don’t like snow. 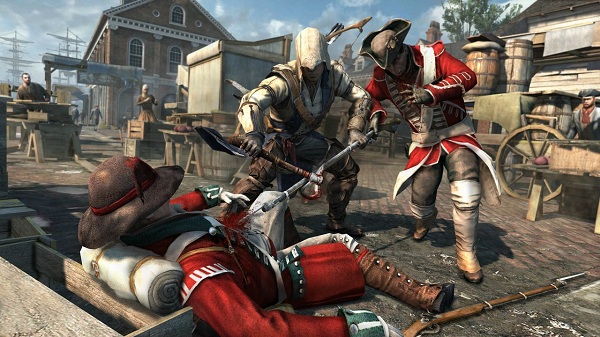 Earlier I mentioned how Connor would always stay in motion whenever he was in combat and nowhere was this more prevalent during the final moments of our time with the game. We watched as Connor climbed through the tree branches before firing a rope dart at the last soldier in a platoon, stringing him up in the tree and hanging him to death before dropping down to deal out death to the rest of the squad. Now firearms are much more prevalent in ACIII than in any past title, and Connor has learned quite a useful skill, the ability to take a human meatshield to protect himself from enemy gunfire. After avoiding being riddled with bullets Connor jumped into the fray with his axe and sword in hand, dealing out fluid death without any animation interruptions in the slightest. One of the key animation changes is the fact that Connor will actually begin countering attacks as he finishes off other enemies through the use of his second weapon, ensuring that combat will always be fluid with zero break in animation.

Also factored into the development cycle was the fact that most of the action will occur on uneven terrain and the team has accounted for these differences in height as well. This change has also been adapted into the climbing mechanic as it has been revamped for the first time since Asssassin’s Creed I, as players will now be able to climb across rugged cliff faces full of bumps, uneven ledges and more. Taking advantage of his position at the top of a Red Coat camp, Connor caused a large explosion by detonating a storage area for black powder before jumping into the middle of the camp, performing three running kills in a row in what may have been one of the best showings of E3. Connor dropped the first man with his tomahawk, picking up his musket while still running, speared a second man with said musket, taking him down to the ground before scrambling to his feet jumping off an overhang and bringing the musket bayonet down on his finally target in an air assassination.