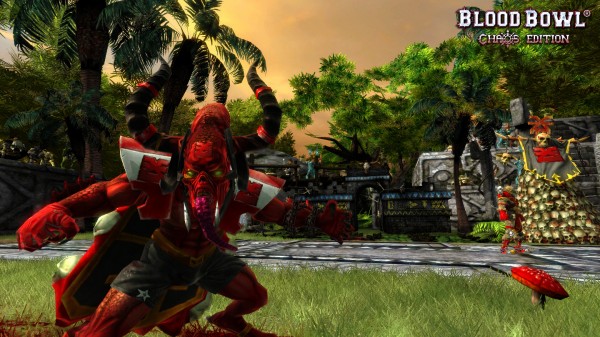 Cyanide Studio and Focus Home Interactive are making an ultimate edition of Blood Bowl to release in September, called Blood Bowl: Chaos Edition, so they have released new screenshots to show some of the new content with the ultimate edition game.  Chaos Edition adds in 3 new playable races, making a total of 23, and adds an additional stadium in the tropical jungle, which is featured in the below screenshots.

Blood Bowl is an adaptation of Game Workshop’s board game, which draws it’s inspirations from the Warhammer universe.  Players can recruit teams of different races to participate in a violent arena of one of the bloodiest sports around.  Featuring both a single player experience and a World Championship, players can go online when they are done playing solo to work their way from national, to continental, to world games.  Players can join the already more than half a million players with Blood Bowl: Chaos Edition when it comes out in September.